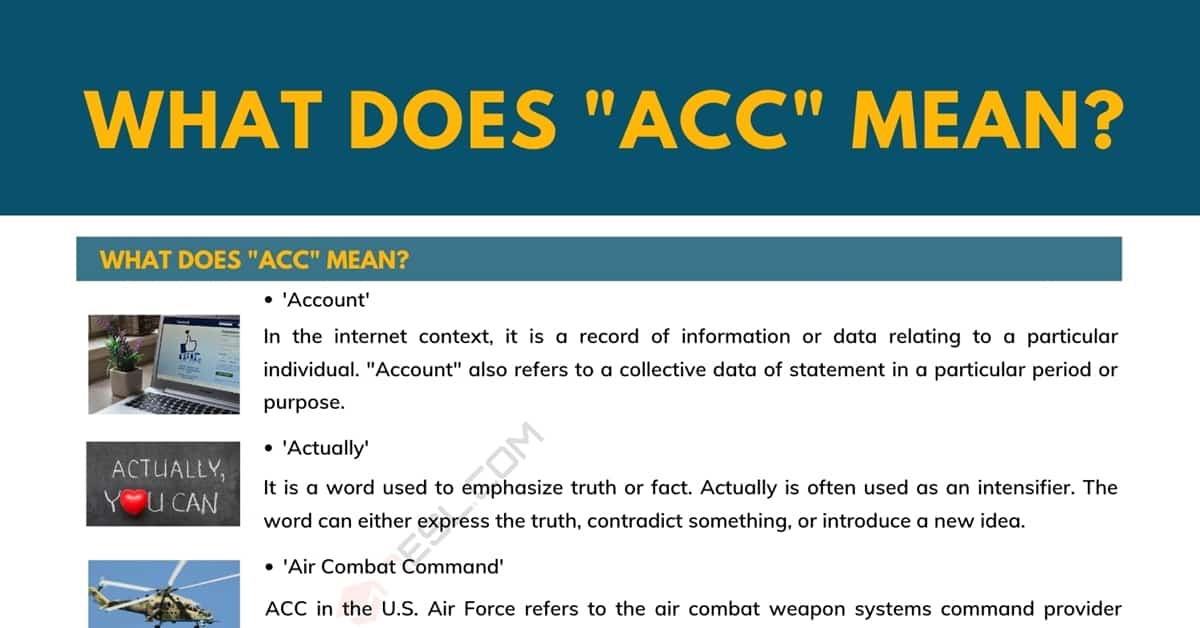 ACC is a known abbreviation of the words ‘account,’ and ‘actually.’ It is also an acronym commonly used in the Air Force that stands for Air Combat Command. In texting and chatting, ACC represents the shortened form of the phrase ‘anyone can come.’

What Does “ACC” Mean?

In the internet context, it is a record of information or data relating to a particular individual. “Account” also refers to a collective data of statement in a particular period or purpose.

It is a word used to emphasize truth or fact. Actually is often used as an intensifier. The word can either express the truth, contradict something, or introduce a new idea.

ACC in the U.S. Air Force refers to the air combat weapon systems command provider essential for the operation of the service unit.

The phrase means anyone can come or everyone is invited. It is normally used when there are gatherings or events coming up.

In the internet context, it is a record of information or data relating to a particular individual. The word account in accounting refers to the collective data or the statement for a particular period or purpose.

It was in the late-2000s when people started to abbreviate the word ‘actually.’ The period of rapid communication through text messaging and online chatting required methods of shortening word length to swiftly convey thoughts.

The origin of Air Combat Command (ACC) dates back to June of 1992. ACC was created to control and operate reconnaissance aircraft, combat search, and rescue aircraft, airborne command, and others.

In online chat and text messaging, time is of the essence and the efficient you are the better. Messages are normally shortened to speed up conversations and reach more people in just a short time with as little effort as possible.

Adults and teenagers use ACC both to shorten the common words ‘account,’ and ‘actually.’ It is also used to inform people that ‘anyone can come’ in their sponsored celebrations. Our uniformed personnel also understands and uses ACC when referring to one of their major command centers.

When to Use ACC?

ACC as the shortened form of ‘account,’ and ‘actually’ is widely used, especially in text messaging and online chatting, in informal colloquialism. However, ACC or ‘Anyone Can Come’ is only used when sending invitations. It saves the host time inviting everyone since he can rely on a few guests who can relay the message. In the U.S. Air Force, ACC is an acronym widely used both in oral and written language. It is prevalent in the daily conversations of our officers and the documentation of the service branch.

“For a moment, the wife actually looked sympathetic.”

“ACC is the replacement of the now inactive Tactical Air Command.”

“Tell your friends that ACC to the party tonight.”