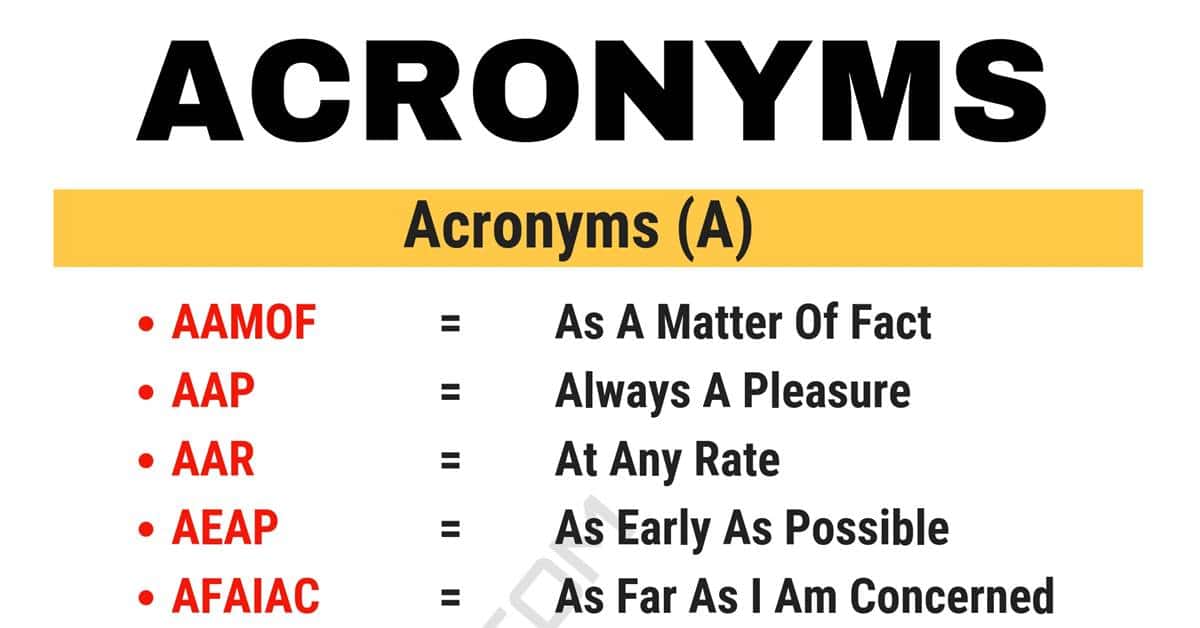 What is an acronym? You might have heard the term acronym used before, but wondered what exactly they are. Or maybe you’ve even come across acronyms but didn’t know what they were or what they meant, so you just skipped over them. This guide will take you through what acronyms are, provide you with some examples, and then look at some of the most commonly used ones that you’ll probably come across in some area of your life, even if you haven’t already done so.

What is an Acronym?

An acronym is a pronounceable word that is formed using the first letters of multiple words. These letters are combined to create a shortened down word for people to say rather than repeating themselves with the full name or multiple words over and over again. Acronyms are usually used in everyday language and they tend to get picked up quite quickly, and in many ways are used more often than the multiple words that the acronym stands for.

RADAR – Yes, radar really is an acronym. It’s so common nowadays that people treat it simply as a word and don’t bother capitalizing it at all. But radar is actually an acronym that stands for Radio Assisted Detection and Ranging – RADAR.

ASAP – most people probably know this one and exactly what it stands for. As Soon As Possible – ASAP.

As you can see, acronyms all become words in their own right, because they are pronounceable. You say NASA as a word, you don’t pronounce it as the letters ‘N’, ‘A’, ‘S’, ‘A’. If you did, this would simply be known as an abbreviation, not an acronym. Be careful not to make that common mistake. Just because a word is formed by using the first letter or few letters of multiple words, doesn’t mean it is an acronym. An acronym must be pronounceable, an abbreviation does not need to be. All of the acronyms above are pronounced as a word, not by their individual letters. An abbreviation would look like this:

BRB – This is an example of an abbreviation because we say ‘B’, ‘R’, ‘B’, not ‘Burb’ or anything similar. BRB stands for Be Right Back – BRB.

Below is a list of some of the most popular acronyms that are out there, and there meanings. See how many you knew were acronyms and how many you thought were just words in their own right:

Some acronyms are used to describe someone’s position or a particular business or organization, just as in the case with NASA or FEMA above. Here are some examples of ones you might come across:

Some acronyms are more commonly found on the internet, so check your social media timelines, messages, and emails to see examples of these in action:

How and When to Use Acronyms in Writing?

Now that we’ve looked at some common examples of acronyms (there are many more too, but you can do some additional research if you’re interested), it’s time to look at how exactly you should use them in writing. And there are some slightly different rules depending on what type of piece you are writing.

If you are messaging a friend, then obviously you can use any of the acronyms however you want. Even on social media, if you’re using something you know other people will understand because it’s commonplace, then you don’t need to worry about explaining anything. Sometimes you might have somebody ask you what it means because the acronym is new to them, but this isn’t a problem. The problem comes when you are writing a formal or an academic piece.

You should only really use professional acronyms in academic or formal writing, because putting things like YOLO or LOL just simply isn’t acceptable. When you do use professional acronyms, no matter how common they are (like NASA), the first time you use it in your formal or academic piece, you should write out the full term and then put the acronym in parentheses afterwards. From then on, you can use NASA instead. So it might look like this:

‘The National Aeronautics and Space Administration (NASA) recently helped in the discovery of a new star. NASA said…’

Acronyms are a great time-saving device to use, but just make sure that people will understand what you mean when you use it.

Acronym vs. Abbreviation vs. Initialism

Acronyms and abbreviations are often confused and used interchangeably. However, despite the fact that these two terms are, indeed, very similar, they mean slightly different things.

This distinction, however, isn’t always maintained, and it isn’t something that all dictionaries and experts agree on. The only certain thing is the difference between acronyms and abbreviations, which is that acronyms only take first letters from words, while abbreviations refer to any shortened forms of a word or a phrase.

Why Do We Use Acronyms/Initialisms?

Acronyms and initialisms have been around for a very long time: they have appeared before the Christian era. For instance, the Roman Empire was officially known as SPQR, which is an abbreviation for Senatus Populusque Romanus. Another example of the early use of acronyms is the fact that, in the Hebrew language, the Hebrew Bible is called “Tanakh”. This is the acronym that is composed of the first letters of the three main sections of the Book, i.e. Torah, Nevi’im, and K’tuvim.

In the middle of the 19th century, it became a trend to abbreviate the companies’ names. This happened because it was a lot easier to fit a few letters, not the whole name, on the side of a railroad car, on the ticker tape, or in the stock listing in a newspaper. So, names like RF&P (from “Richmond, Fredericksburg and Potomac Railroad”) and Nabisco (from “National Biscuit Company) appeared.

In the 20th century, acronyms grew even more popular. With breakthroughs in science, medicine, and technology, many new and complicated terms and concepts were created. To make things easier, many of them have been abbreviated.

Today, the most common use of acronyms and initialisms is for the names of corporations and for long, complex concepts. With the rise of text messages and social media, more words have been shortened to save time and space, e.g. BFF instead of “Best friend forever” or LOL instead of “Laughing out loud”. While some linguists claim that the use of texting acronyms degrades the clarity of the language, others support that this is just one more language change that needs to be embraced. After all, acronyms existed thousands of years before smartphones were invented. 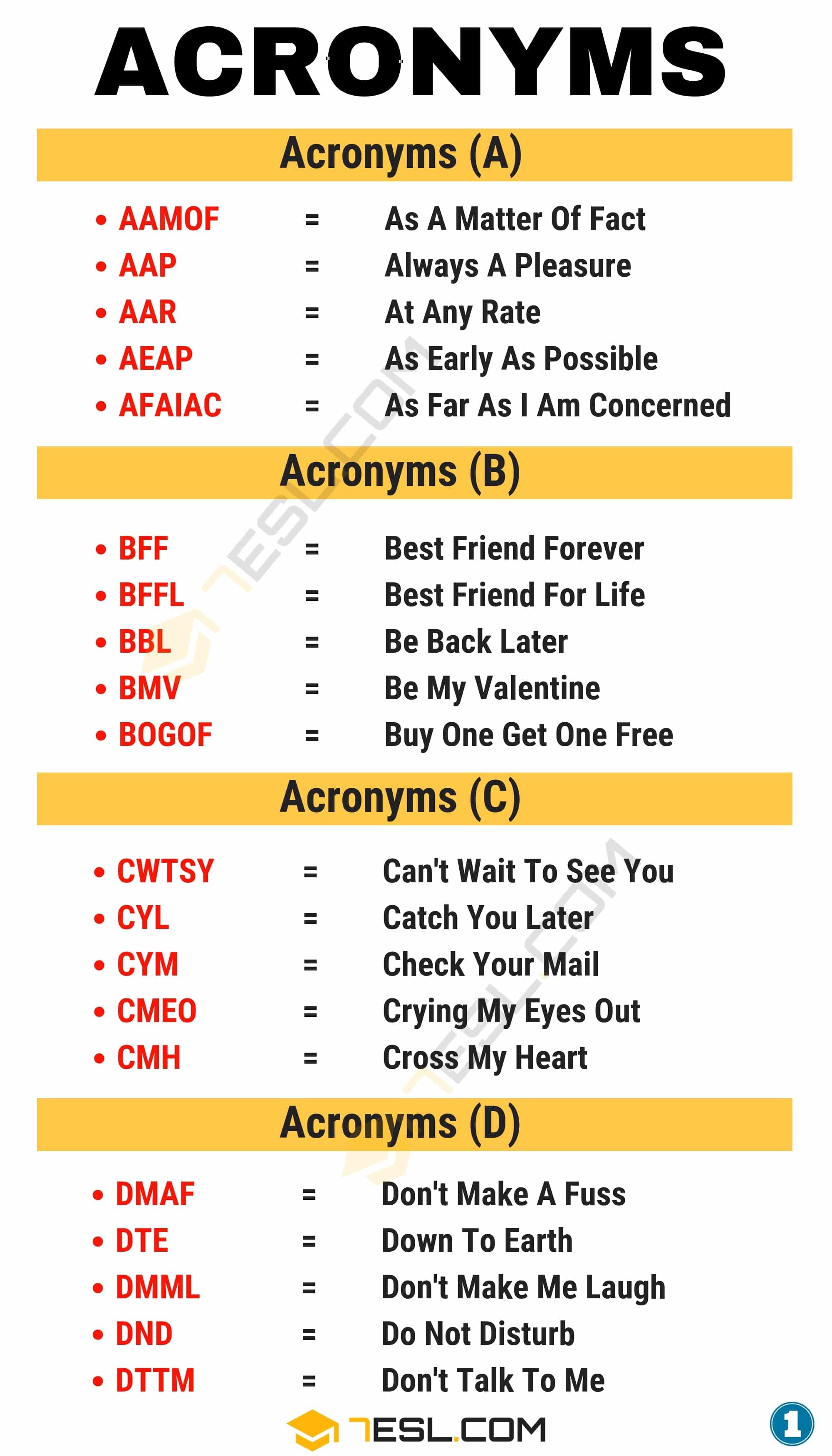 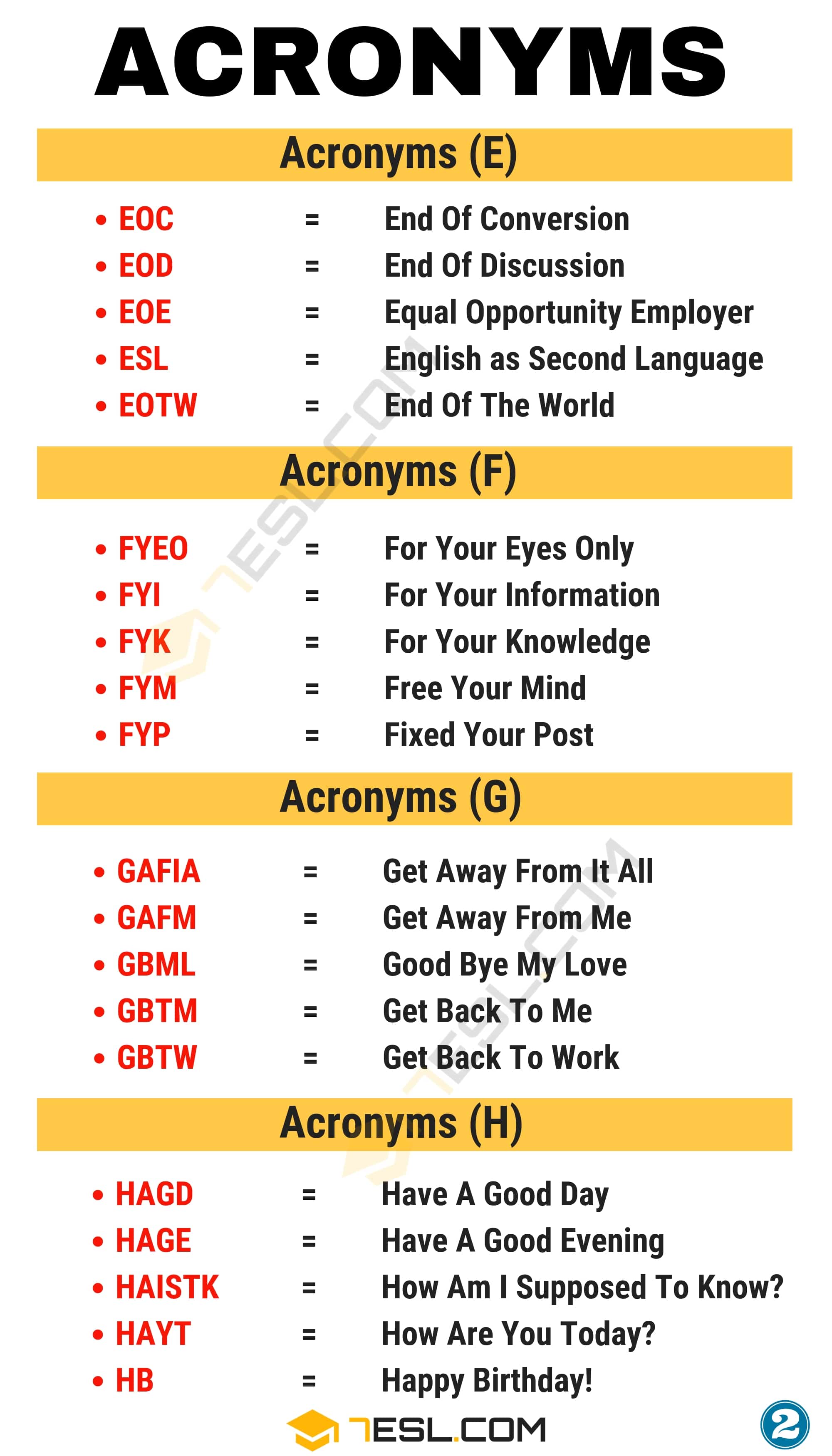 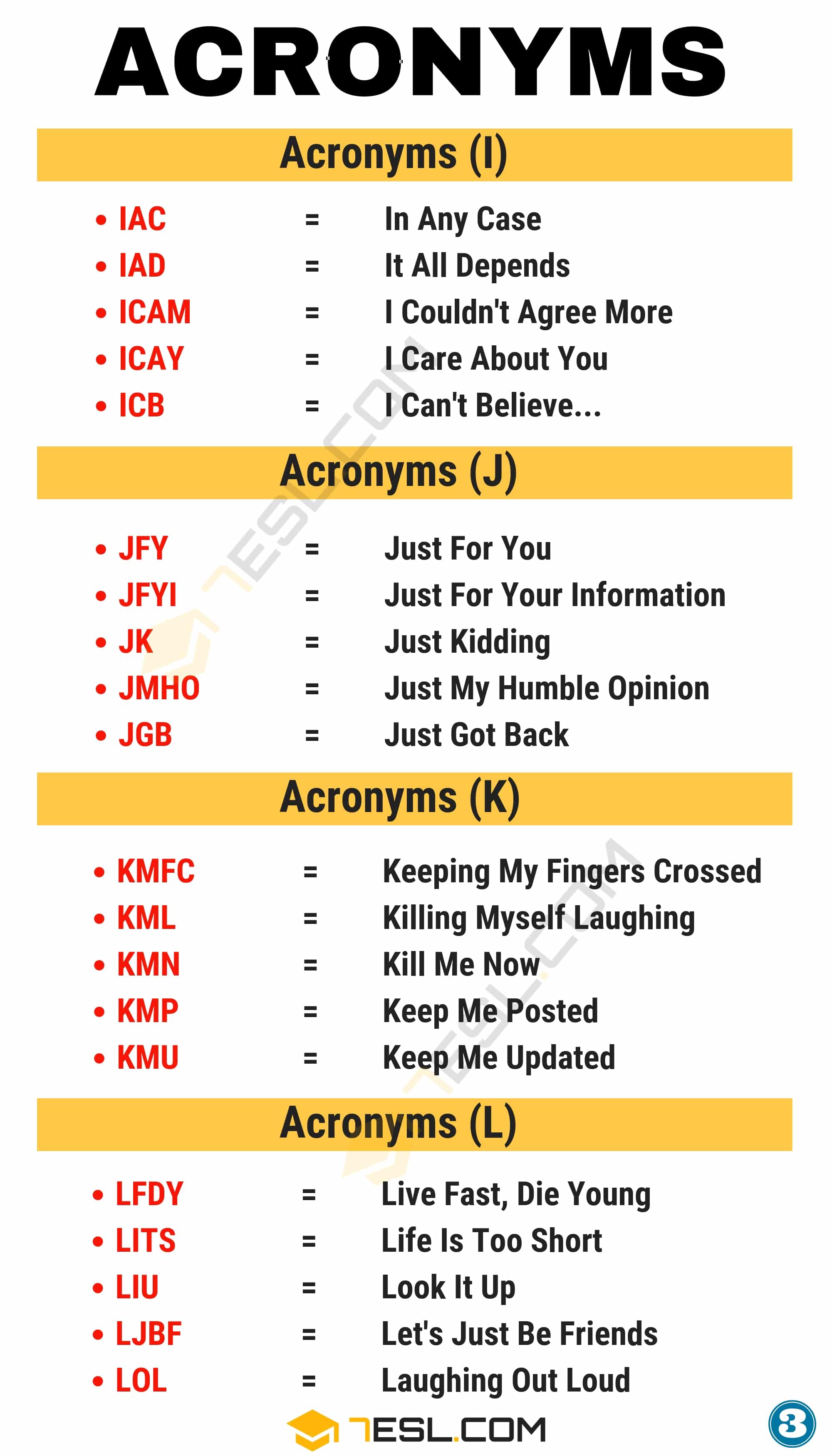 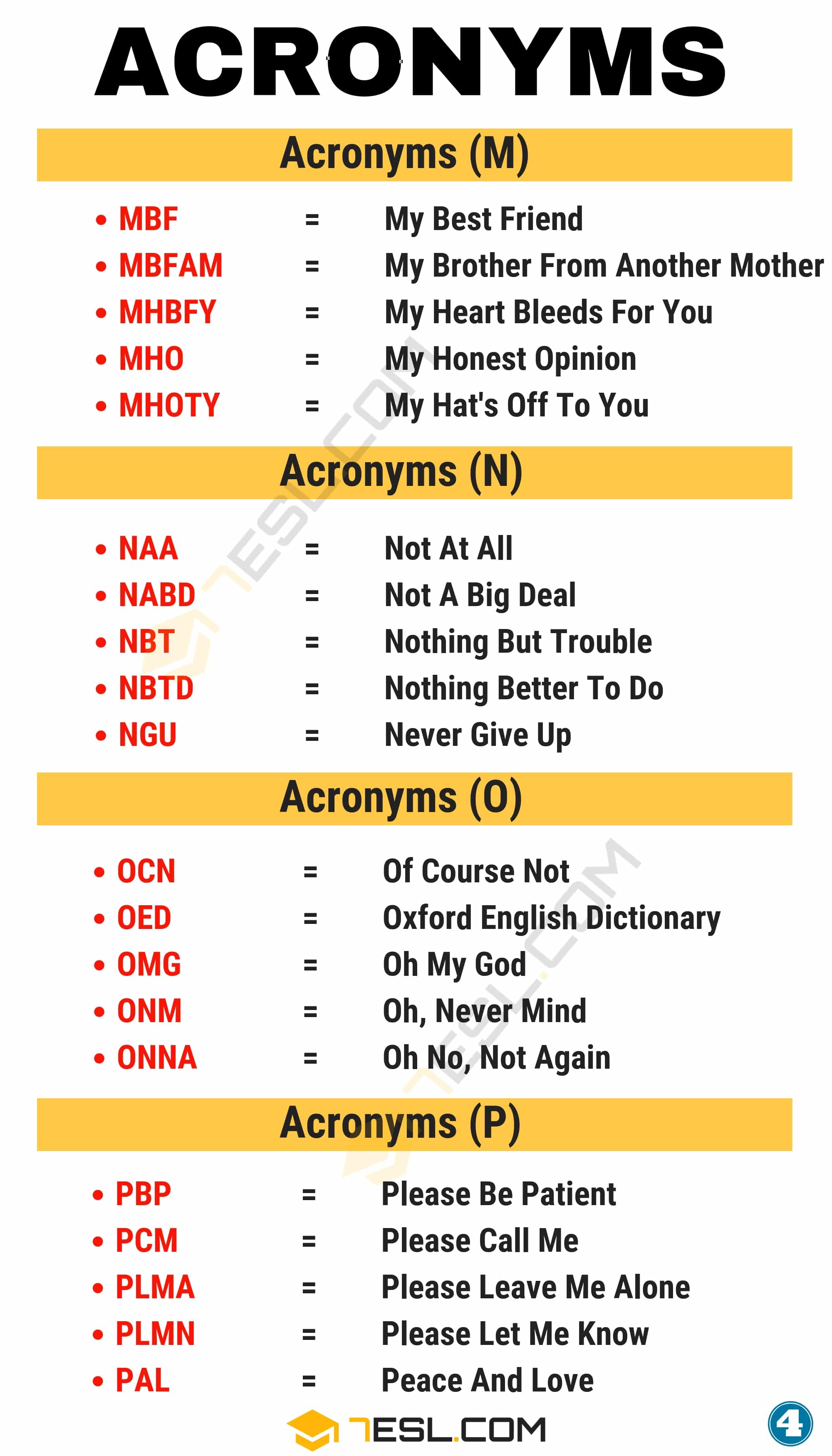 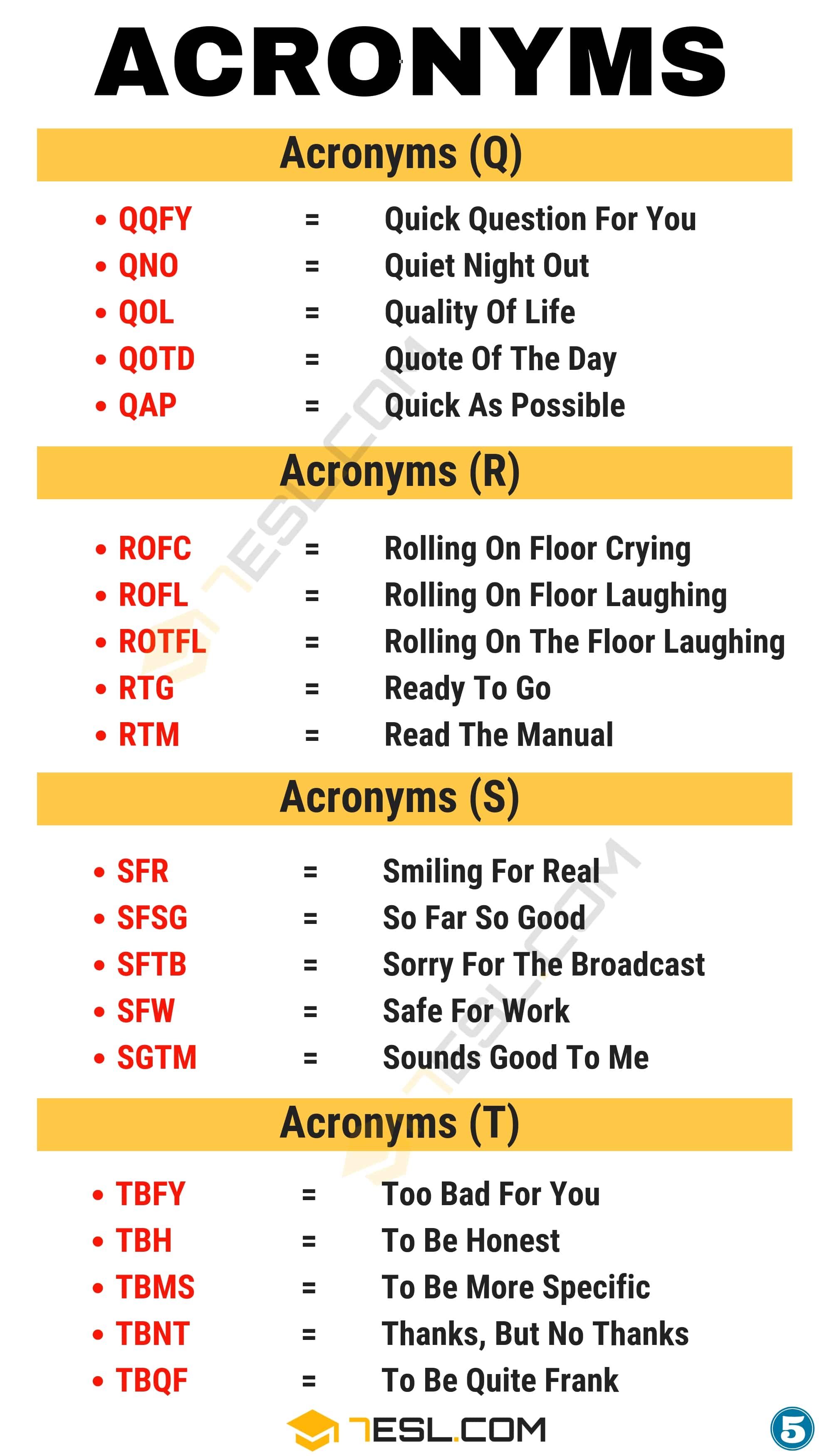 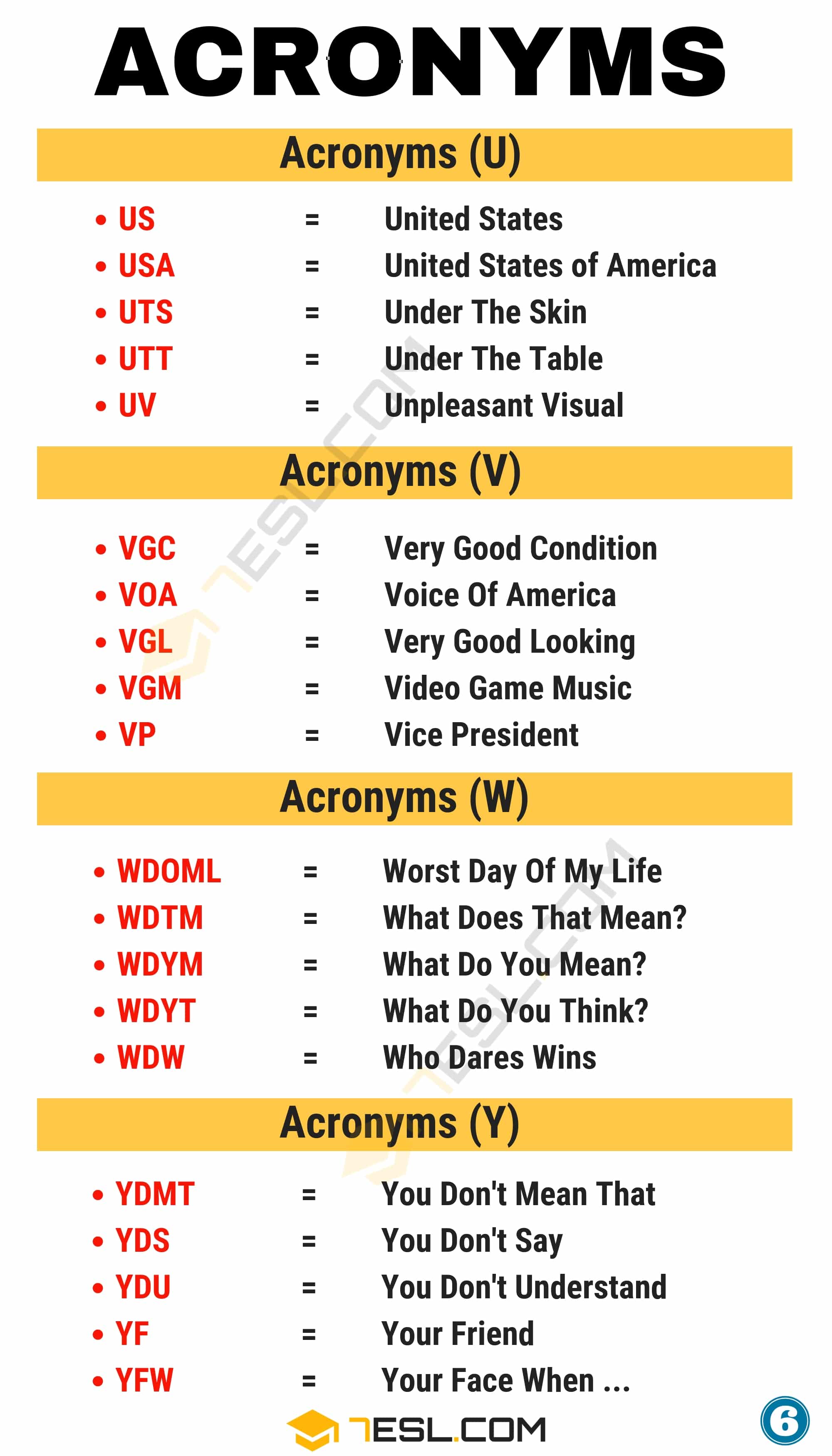 What does BOFFO stand for? Saw in Washington Post in reference to Trump saying that his rallies are well attended or boffo, (basically means highly successful).

very successful or wholeheartedly commendatory. or. (of a laugh) deep and unrestrained.