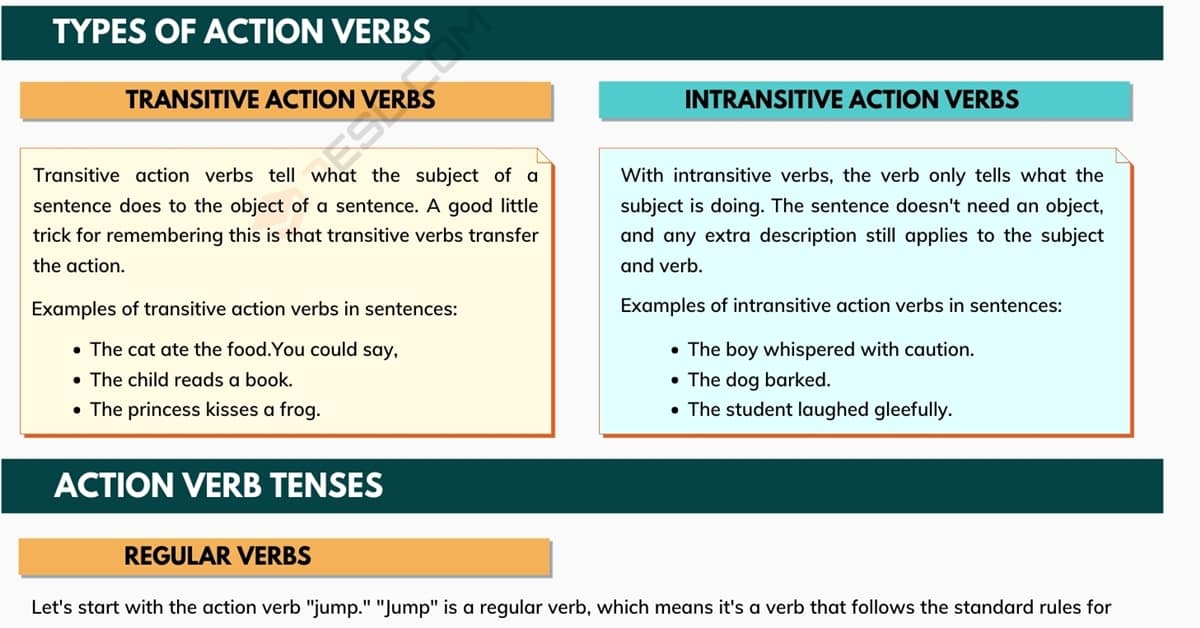 Lights, Camera, Action Verbs! English can feel overwhelming sometimes, but breaking it down into smaller pieces makes it easier to manage! Verbs are one of the most important parts of English. Some of the most basic sentences are made up of a subject and a verb, and the subject can even just be implied sometimes. For example, “Go,” is a complete sentence, with “You” as the implied subject.

What Is An Action Verb?

Action verbs exist everywhere, so they’re very important to know. They’re all over, in many sentences, including ones in this lesson. Learning to use them, and learning to use them correctly, is a fantastic way to improve your English and expand your vocabulary.

There are two types of action verbs: transitive and intransitive. These are determined by how the verb is used more than by what the verb is.

Here are some examples of transitive action verbs in sentences:

You could say, “The food was eaten by the cat.” This would be passive voice, but it’s a good way to spot a transitive verb, because it’s doing something to the object.

With intransitive verbs, the verb only tells what the subject is doing. The sentence doesn’t need an object, and any extra description still applies to the subject and verb.

Here are some examples of intransitive action verbs in sentences:

Unlike the transitive verbs, this one doesn’t have an object that the verb is affecting. Even though the sentence goes on past the verb, “with caution” only describes how the boy whispered, not to whom he was whispering.

As you can see, there’s really an action verb for anything that a person, animal, or thing can do. 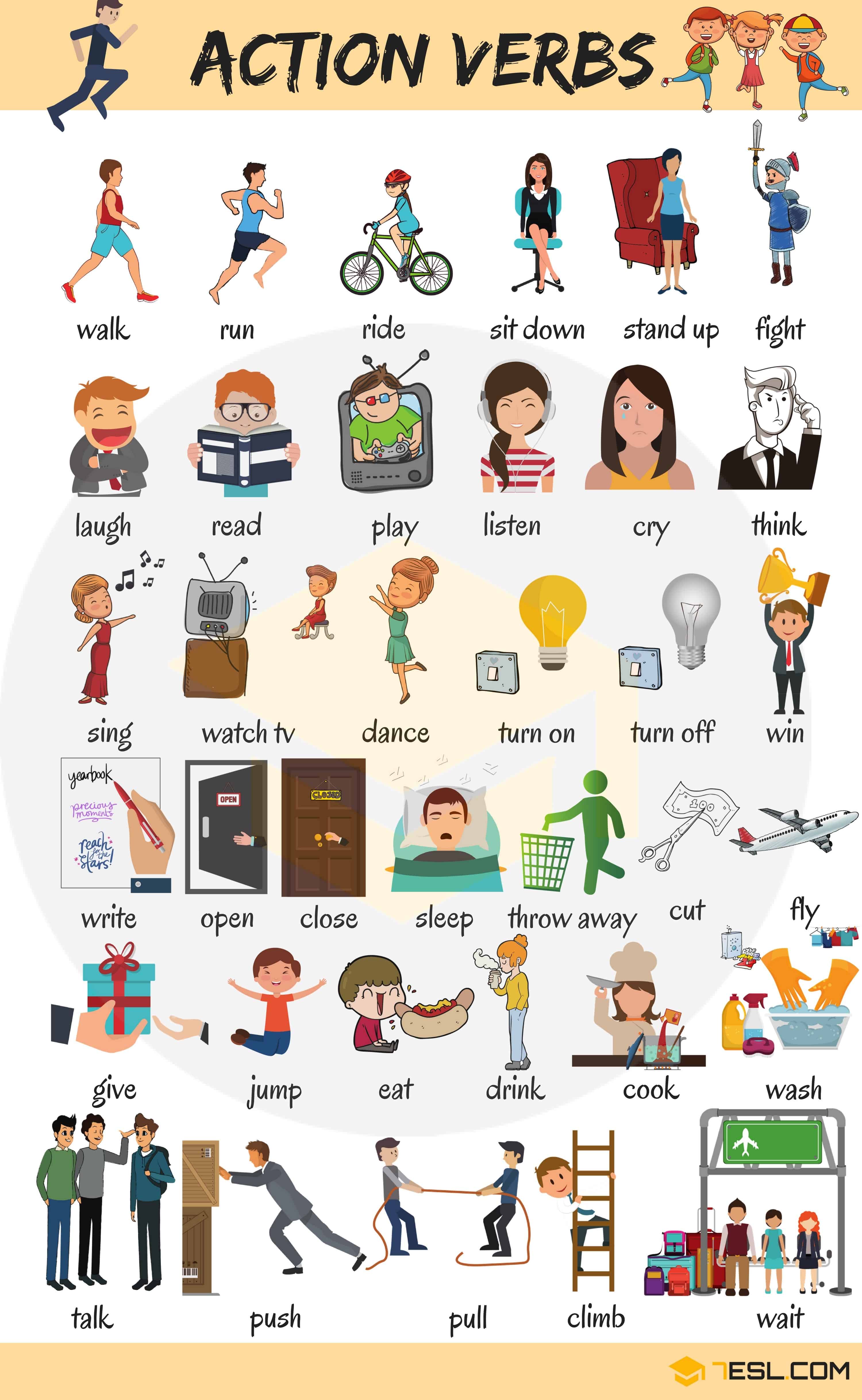 Now that you’ve looked at some of the different action verbs, it’s important to learn how to use them in different tenses. There are actually twelve different tenses in English. The three simplest and most common are what we’re going to focus on here: past simple, present simple, and future simple. People often refer to these as just past, present, and future tense.

Let’s start with the action verb “jump.” “Jump” is a regular verb, which means it’s a verb that follows the standard rules for conjugation. The easiest is usually present tense since that can match the infinitive. An infinitive is when the verb has “to” in front of it, so here, it’s “to jump.”

The present tense for “jump” is “jump.”

Past tense on a regular verb means adding “-ed” to the end of the word. In this case, we get “jumped.”

For future tense, we need a helping verb, usually “will,” to tell us that it’s happening in the future. This turns “jump” into “will jump.”

Ready to see these in action?

Keep in mind that the verbs can also change based on who is doing them.

As you can see, many of them stay the same in regular action verbs, but the present tense for third-person singular nouns (he, she, it) changes slightly, so it’s important to know who is doing the action if you’re making a complete sentence.

Irregular verbs are tricky because they have no real pattern. Some irregular verbs may work the same way as other irregular verbs, but that doesn’t mean they all follow the same rules. That’s why they’re called irregular. Basically, to properly turn irregular verbs into past, present, and future tenses, you’ll need to memorize the tenses for that particular verb.

This doesn’t mean it has to be overwhelming! It might take a minute, but most English speakers will know what you are trying to say if you treat an irregular verb like it’s a regular one. They might correct you or need to clarify, so this isn’t a permanent solution, but it helps take some of the stress off while still learning.

An example of an irregular action verb is “drive.” Here’s what “drive” looks like in different tenses:

The other tenses that action verbs can take have less to do with the verb and more to do with what’s added to it. As a quick reference, these will include first person examples using the action verb “jump.”

These are less common and for more complicated situations, and it’s good to study them when you’re ready to study tenses in further depth. 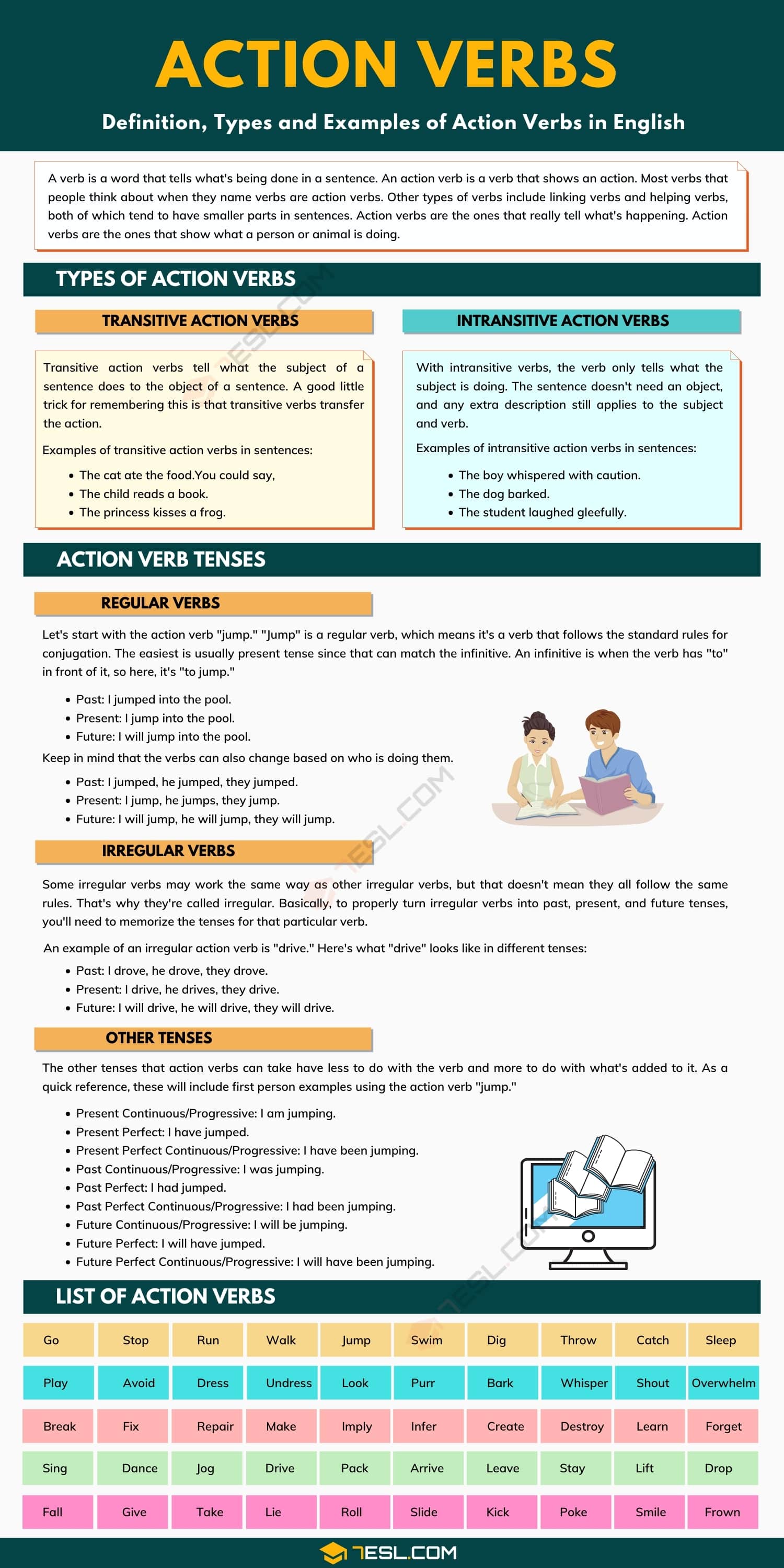