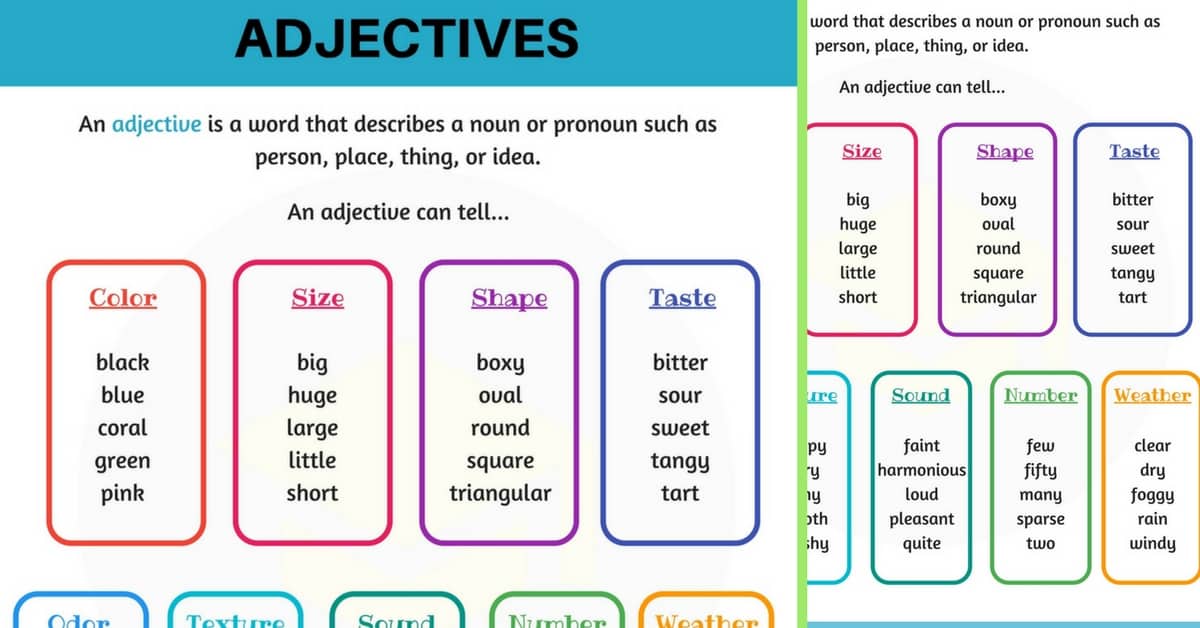 What are adjectives? The adjective is an important part of a lot of sentences and is used in all languages, but what is their importance in the English language? In this article, we are going to be looking at what exactly an adjective is as well as how it functions within a sentence.

Adjectives can be used in many ways and help the speaker or writer to better describe something, giving the audience a clearer picture about what is being discussed. Adjectives can come in various forms and depending on their form and what type of word they are modifying, will depend on where they are placed within a sentence.

What Is An Adjective?

Adjectives provide details about people, places, and things. We use adjectives to alter nouns and pronouns. For example, we can make a noun like duck more specific by introducing it with an adjective like tiny or quiet. While adjectives can make your writing more descriptive, it is crucial not to overuse them.

What is an adjective? In the most simple terms, an adjective is a word used to describe a noun. These words can add a more descriptive flavor to a sentence. For example, you might say something along the line of the following in order to describe a tree, “It is a tree.” If you were to add an adjective into the sentence, you would give a clearer picture of what you were trying to describe, by saying something such as “It is a large tree.” or “It is a large, leafy tree.” The words in bold are the adjectives and allow the listener to get a better understanding of the object being talked about.

How Important Are Adjectives?

An adjective can denote the color, size, condition, sense, quantity, appearance, time, or personality of a noun or pronoun. Also, adjectives are capable of expressing comparisons by degrees.

However, adjectives do not simply have to describe an object, they can also be used in order to describe something that is not tangible. A good example of this is the use of adjectives to talk about someone’s personality. You might say something along the lines of ” My father is an intelligent man.”

Adjectives are a great way to appeal to the senses by describing visual aspects, taste, smell, sound, and emotional or non physical attributes.

In short, adjective is a part of speech which is common that people use it almost automatically, both in speech and in writing.

What Is An Adjective? Adjective Definition with Examples 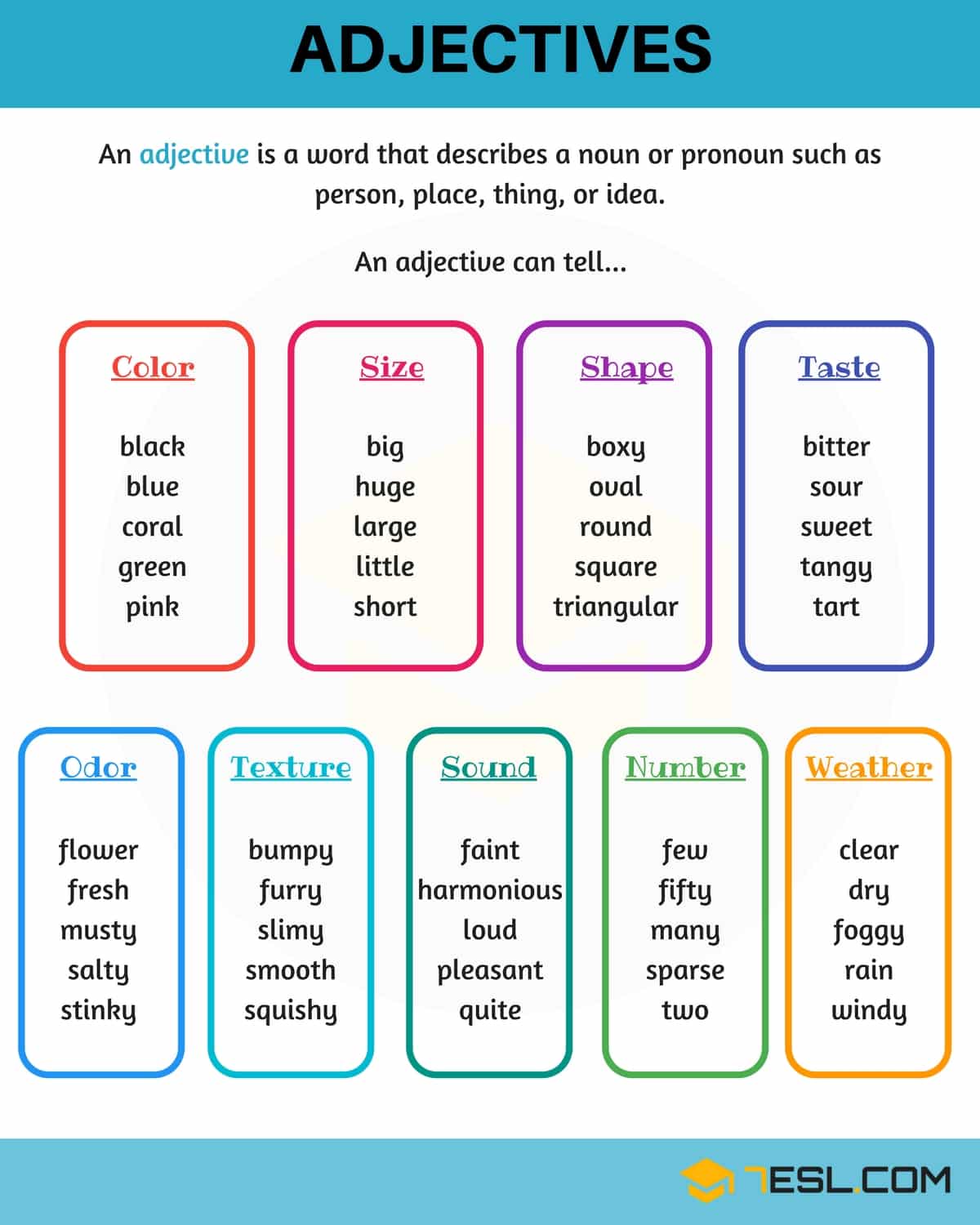 We can usually identify an adjective by asking specific questions like how many, what color, which one, or what type. The answers to the above questions help illuminate the adjectives present in the sentence.

English Adjectives can be identified by their endings. Common adjective endings are as follows:

Though, a large number of adjectives are different…

Do Not Overuse Adjectives

We can grade most adjectives. That is to say, adjectives allow alterations of their meaning by adverbs. Examples of adverbs include extremely, slightly fairly, and very. When pairing gradable adjectives with adverbs we can adjust their intensity.

Adjectives modify pronouns and nouns. In contrast, adverbs modify verbs. A lot of adverbs have an -ly suffix. Words like quickly and dangerously are examples of adverbs with this suffix.

In the first example, the girl is being modified. In the second, the girl’s moves are being addressed.

Types of Adjectives in English

Attributive adjectives appear before a noun in a sentence. In contrast, predicate adjectives tend to follow verbs. Become and look are examples of typical verbs in which adjectives follow.

While Limiting adjectives limit the noun being described. Each type of adjective helps to organize the almost limitless amount of adjectives. Where a particular adjective belongs depends on where we place it in a sentence.

There are different types of limiting adjectives as follows: 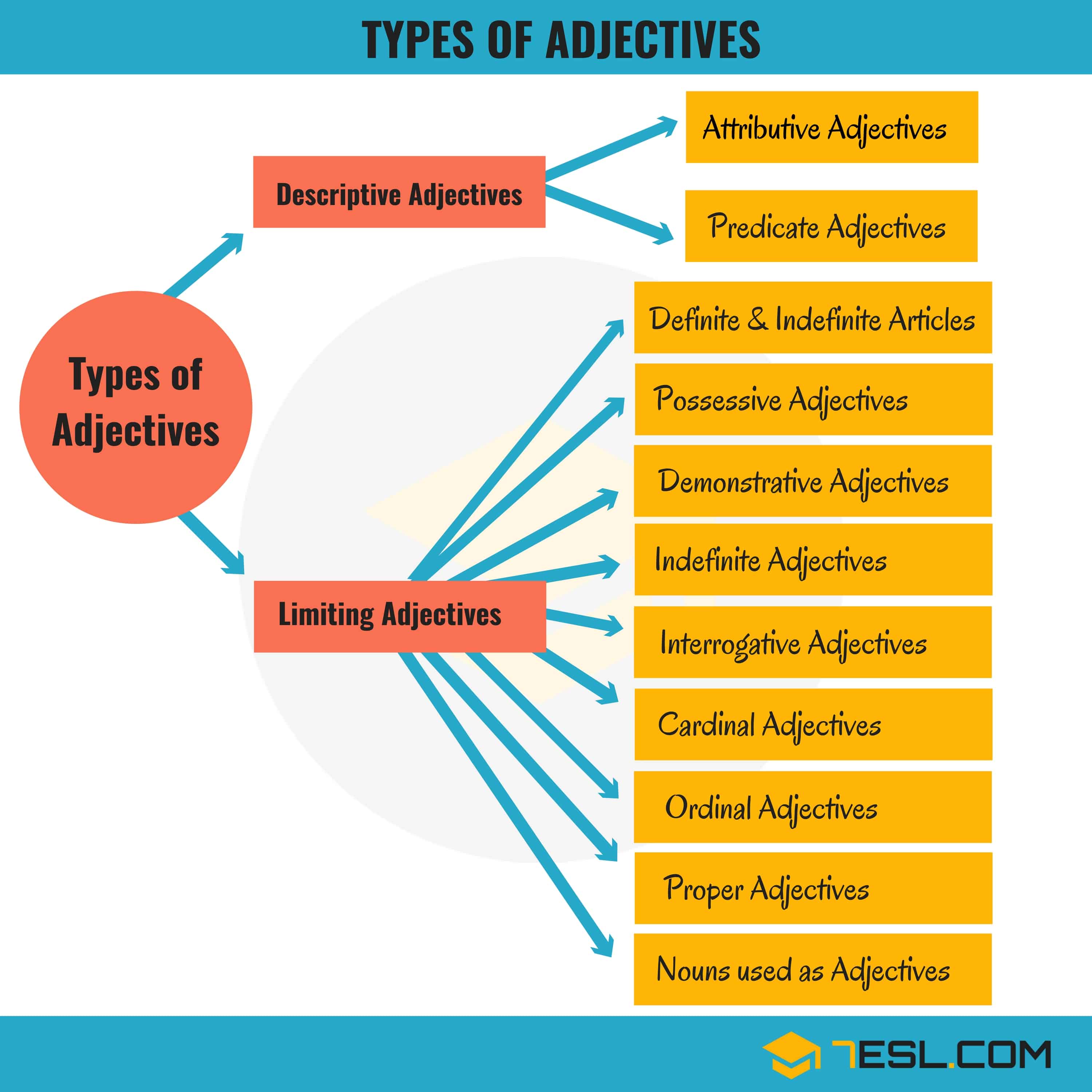 Listed below are some categories we use to sort the adjectives.

The most commonly thought of adjectives are descriptive. They help make our writing more clear and precise. Descriptive adjectives accomplish this task by modifying a pronoun or noun with an attribute. Hence, this type of adjective will come before a noun or pronoun.

Distributive adjectives point to a particular noun. Usually, these adjectives appear before the noun they wish to modify. In addition, they tend to accompany singular nouns.

Any, each, every, neither, and either are examples of distributive adjectives. 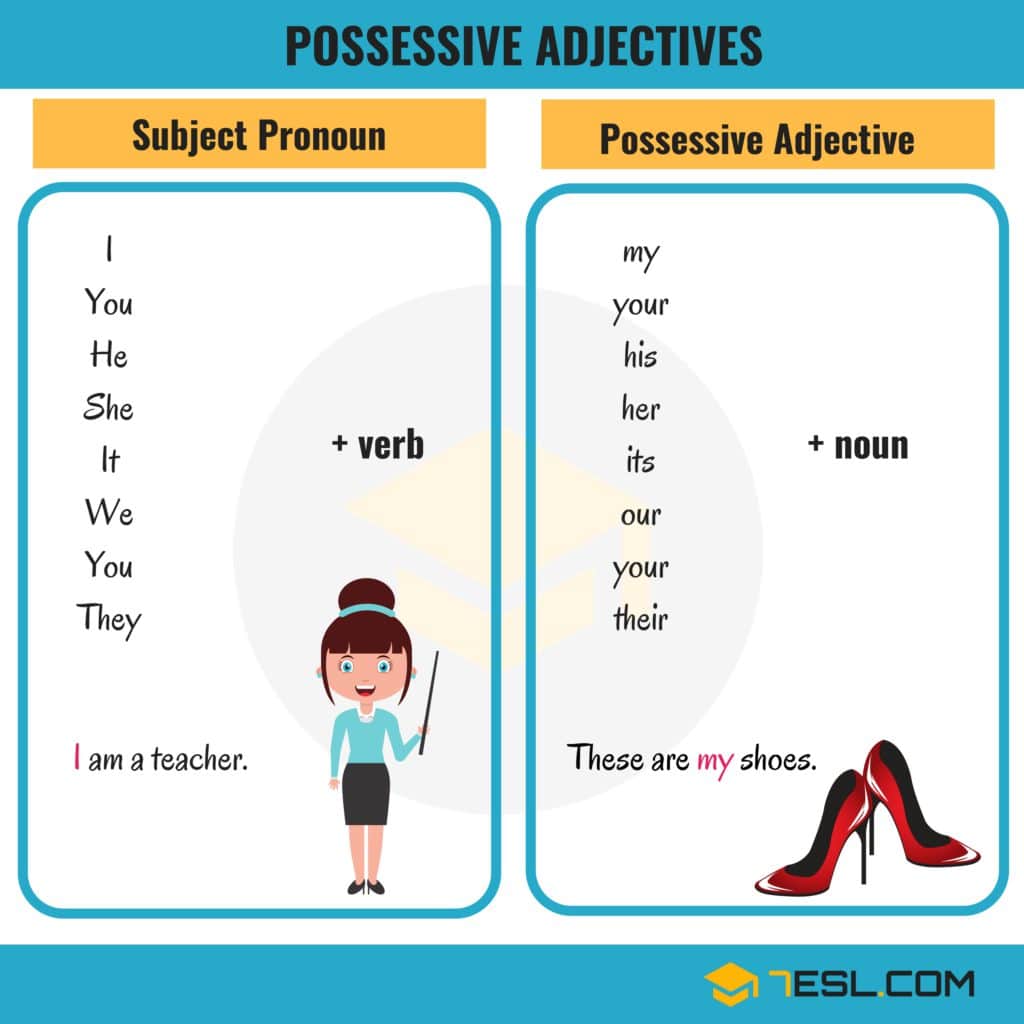 Sequence adjectives assign numbers to nouns; however, they do not demonstrate order with ordinal numbers.

Quantitative adjectives alter pronouns and nouns numerically. They answer questions of how much or how many.

When a noun modifies another noun they become a functioning adjective. We call these transformed nouns adjectival nouns or noun modifiers.

Alternatively, adjectives can masquerade as nouns. This occurs when groups of people are being described. The modified noun disappears and the adjective adopts the noun’s placement.

In general, the adjective order in English is: 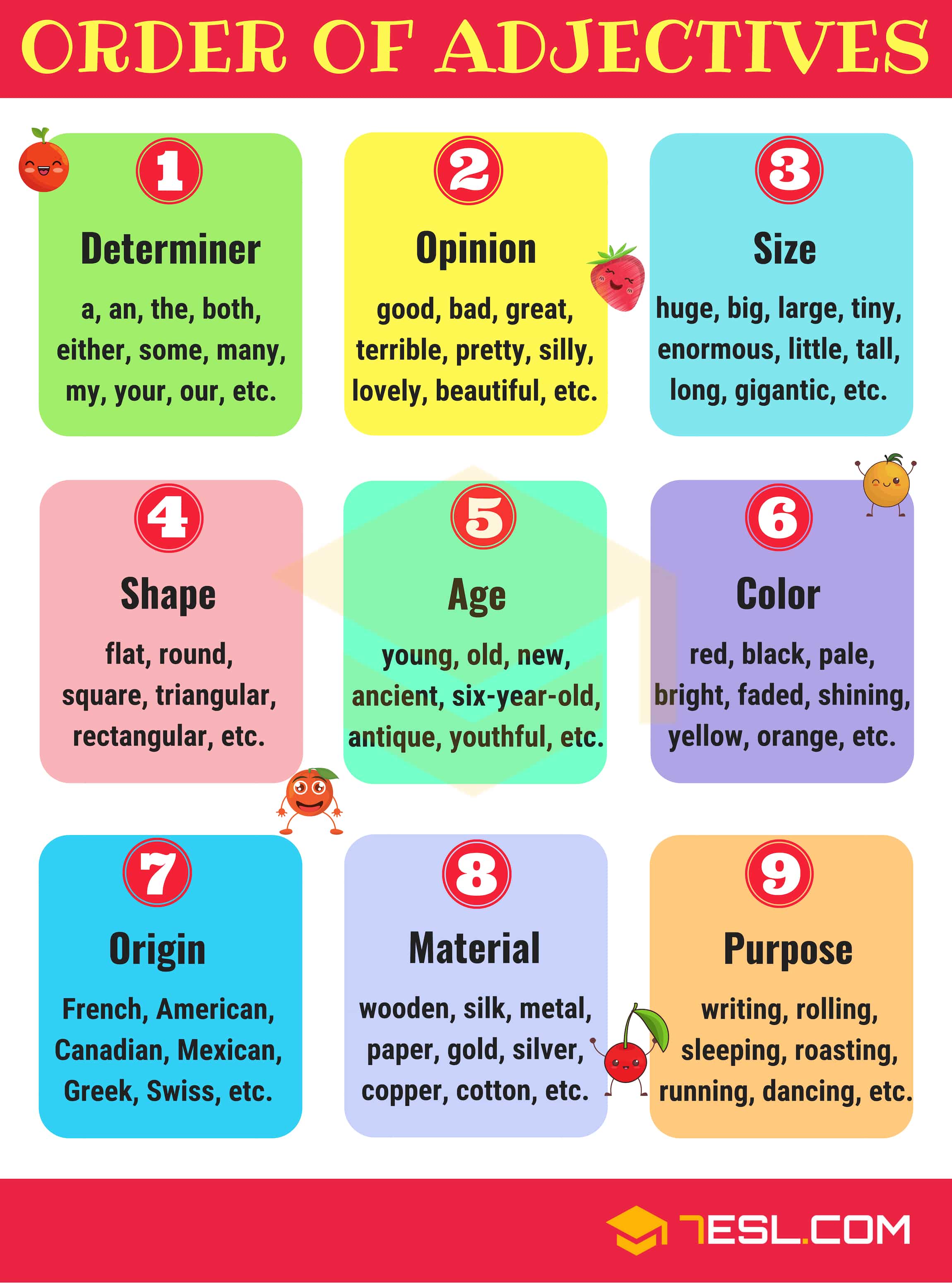 Where to Place an Adjective in a Sentence

Three types of placement adjectives exist. Attributive adjectives come before the noun they modify. A clear day is an example of this type.

The Position of Adjectives in a Sentence

To ensure that you have a properly formed and grammatically correct sentence, it is important to position the adjectives in the correct place. We are now going to take a look at where the adjective should be placed within a sentence in order to make it sound as authentic as possible.

An attribute adjective is placed before the noun it is modifying. Let’s take a look at some examples of this.

You can also have a predicative adjective which is placed after the noun which it is modifying. Here are some examples to demonstrate this.

Here are some examples of these verbs being modified with an adjective.

You can also use an adjective after the verbs to smell, to taste, to sound and to look. Let’s take a look at some examples of the adjective placement for these verbs.

Adjectives Without A Noun

You might wish to use more than one adjective in order to give you sentence a very descriptive feel. For example, you might say “This is a large, red car.” or “I am a clever, thoughtful person.”

We can compare adjectives by degrees. Adjectives come in a three-degree hierarchy: positive, comparative, and superlative.

It is an ordinary form of adjectives. We use the positive degree when referencing a single person, thing, or place.

A positive adjective is used to describe something without making any sort of comparison to anything else. For example, as seen in the sentence “I am kind.” or “This is a great movie.”

A comparative adjective is used in order to compare two things, it is quite often followed by the word than, you can see this in the following examples. “I am nicer than him.” or “This movie is better than the first one.”

In addition, more placed in front of a descriptive word creates the comparative form.

Indicates that the quality or quantity is at its highest or is most intense. A superlative adjective is used as a way of comparing more than two things and as a way to say that the thing you are talking about is the ‘most’, you might notice this in the following examples. “I am the nicest of all the students.” or “This is the best movie out of the entire series.” 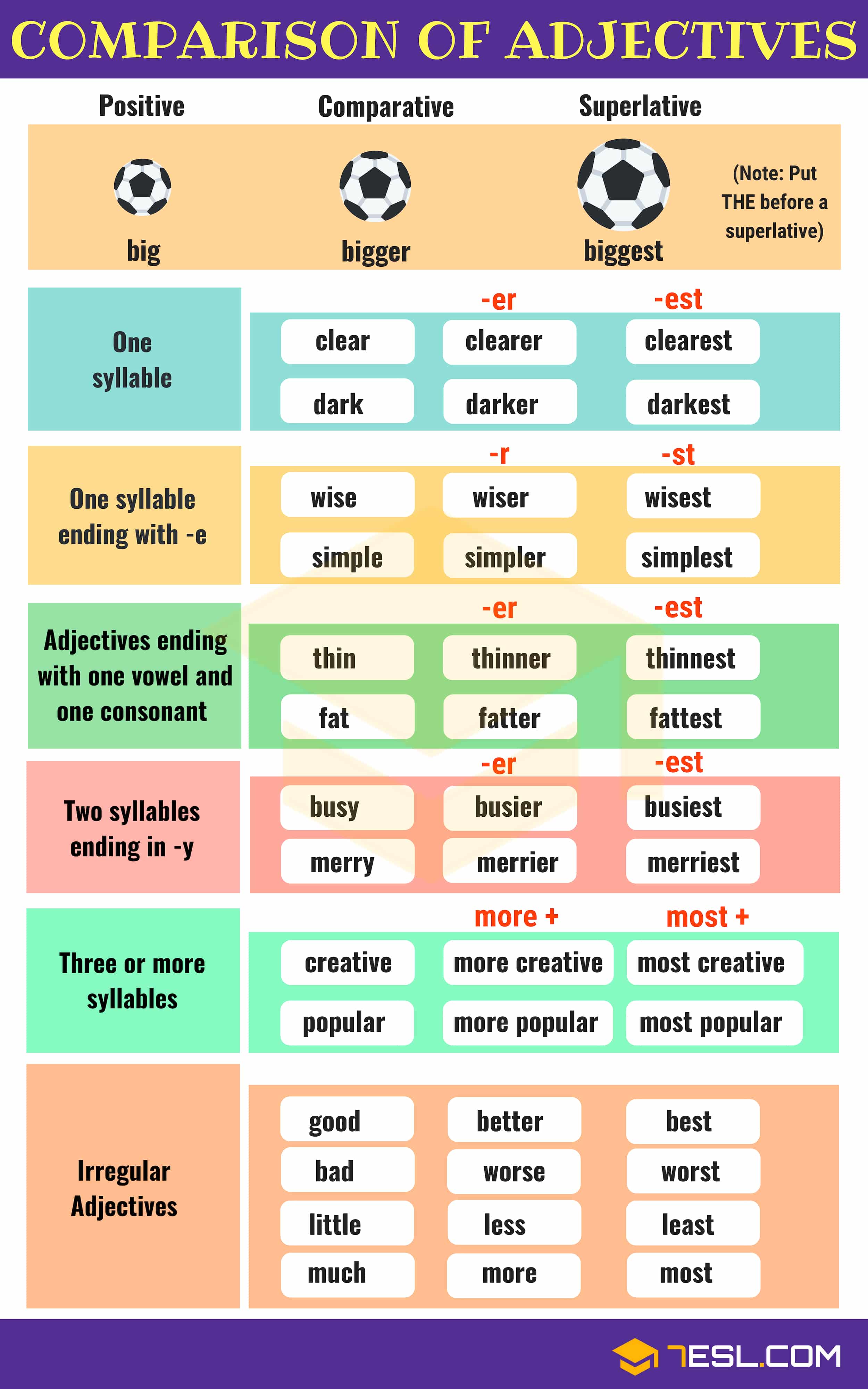 We can use two adjectives to describe a noun. To make our writing flow nicely we use a coordinate and cumulative adjectives.

Two adjectives of equal weight constitute coordinate adjectives. We separate them with a comma.

A cumulative adjective has two adjectives that build upon each other. There order only works one-way to create meaning. These adjectives cannot have the word and separate them.

Compound adjectives in this category consist of at least two hyphenated words.

She loved her six-foot snake. 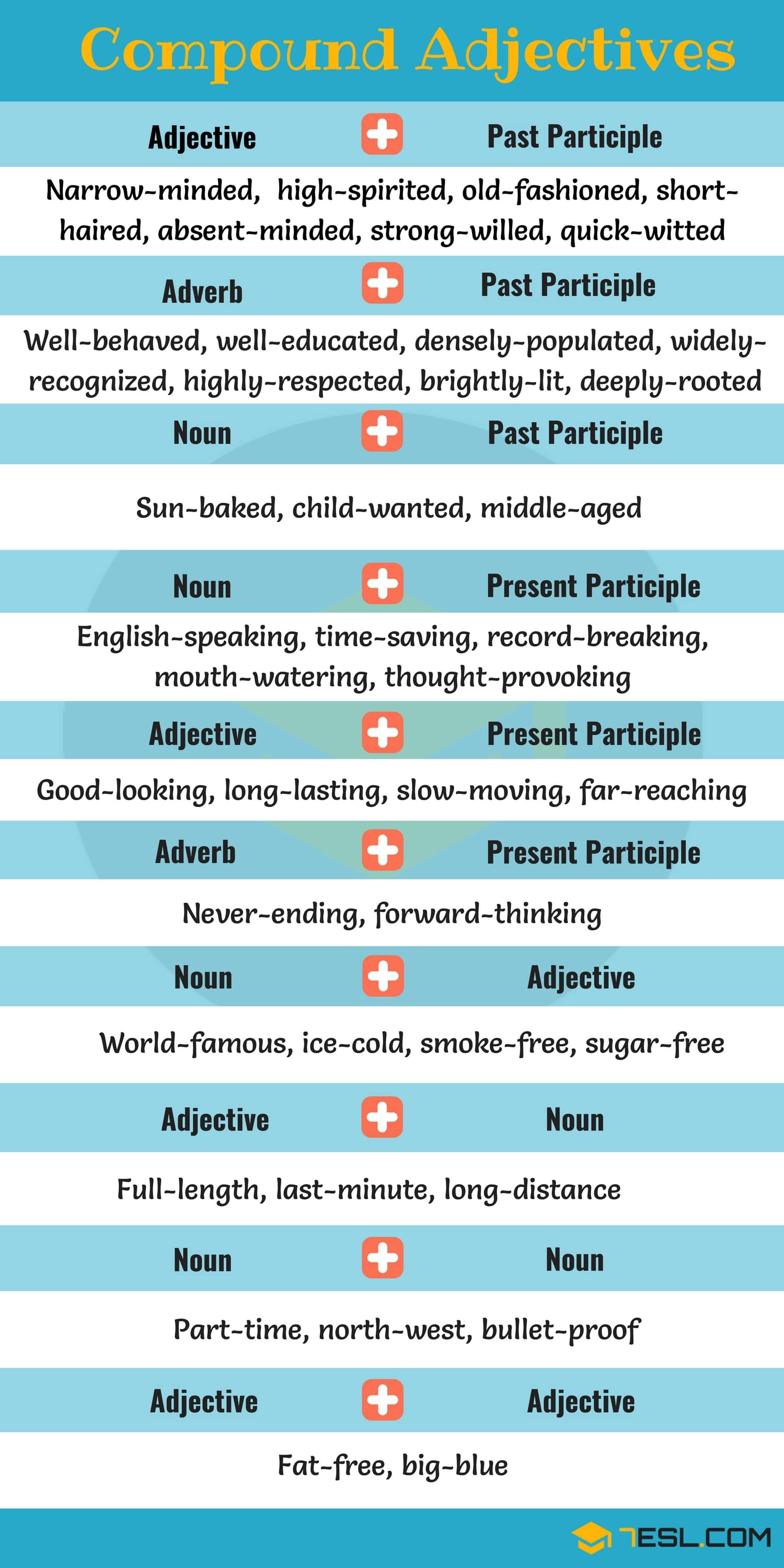 You can literally use an adjective to describe a whole wealth of things from how something appears to what it smells like or its size. We are now going to look at a few examples of adjectives to describe different things.

Adjectives Ending in -ED and -ING

Learn the difference between adjectives ending in -ED and -ING with useful rules and examples. 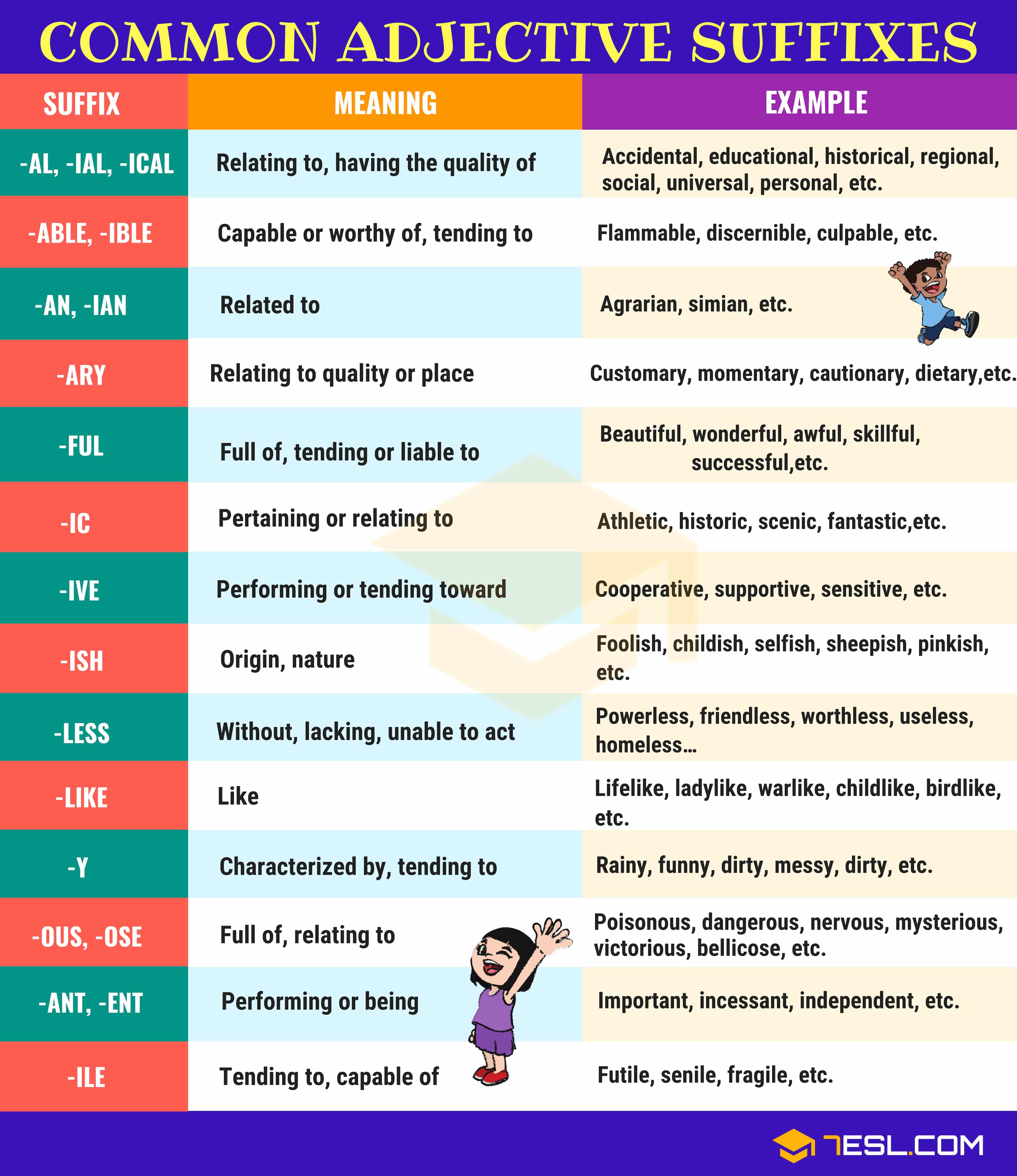 This is really awesome

This is so useful.Thanks you so much!

heck yea it is

i am telling the principal

Thank you so much for doing this kind of matter. It really helps me alot.

Simply an easy way to make a ppt with these content and take to our government school students. Thank you from the bottom of my heart.

this is asom im 9 and it is good