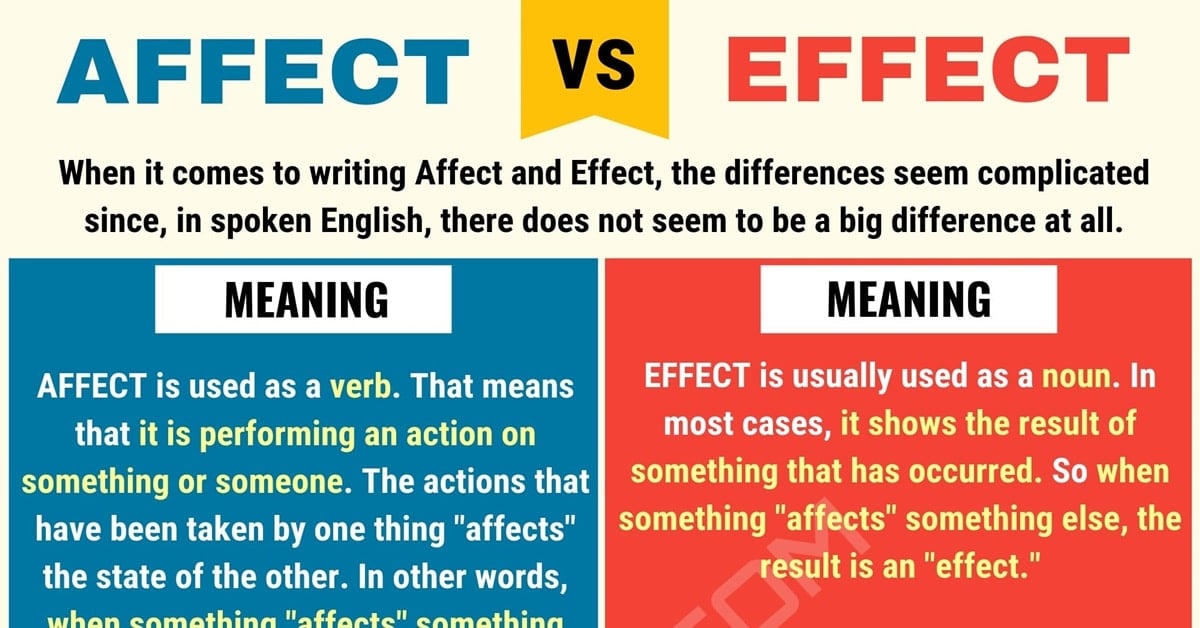 What’s the difference between affect vs. effect? Few mistakes are more common in English than mixing up affect and effect. Whether it’s because the words are just so similar in spelling, or because they are essentially pronounced the same, we can’t tell (although it probably has something to do with both of those things).

You’ve probably made the mistake of mixing the two of them up countless times, researched the proper use, changed it, and then forgotten all about the difference again by the next time you come to use them. Well, this guide should take you through the meaning of both of these words, with examples to highlight the difference between the two and how to use them correctly in a sentence.

When it comes to writing effect vs. affect, the differences seem complicated since, in spoken English, there does not seem to be a big difference at all. Depending on your situation in writing and what you are trying to convey to your reader, the question of which one to use (affect or effect) shouldn’t be too tough after reading this article.

When to Use Affect

Affect as a Verb

In the above example you can see that affect is being used as a verb – it’s most common usage – because it is being stated that the children’s tiredness directly impacted upon their test results. Remember, we use affected to show that something has impacted upon something else to make a change.

“The rain could affect the crops this year if it doesn’t stop.”

Again, affect is being used as a verb. The rain is impacting upon the crops in the sentence, so affect is used to show this.

Affect as a Noun

So far you’ve probably followed along relatively easily, but now we need to confuse things slightly. Affect can also be used as a noun (though it is much less common). Affect as a noun is most often found in psychology, because somebody’s affect is their emotions, body language, facial expressions etc. that relate to an emotion. You might come across affect being used as a noun if you watch criminal documentaries where a psychologist might be asked to look at somebody’s behavior for example. Here’s how affect would be used as a noun.

“You can really see that his affect is typical of a serial killer.”

Here affect is being used as a noun to show that somebody’s emotions, body language, facial expressions etc. are similar to those typically found in a serial killer. Affect as a noun relates to these physical manifestations of emotion.

“His affect would certainly indicate depression.”

Again, this is using affect as a noun because it is describing somebody’s physical manifestations of emotion.

When to Use Effect

Effect as a Noun

In the opposite way round to affect, effect is much more commonly used as a noun (although it can also be used as a verb too, but this is less common). Effect as a noun means a change that is done when something happens, it is used in a similar way to consequence or result. You would notice the effect of something, if something happened that caused a change. Here are some examples of effect being used correctly as a noun.

“His top grade was an effect of his hard work.”

Effect is being used as a noun here to show that his top grade was a result of his hard work. The hard work that he put in had an effect on his final grade. You could just as easily replace effect with result or consequence, and the sentence would make sense.

Effect as a Verb

Of course, the English language loves complicating things further whenever it can, so effect can also be used as a verb. In this case the verb effect means to bring about or to cause or achieve something. Remember, verbs are always showing action in some way, so ask yourself if you are trying to show action with the verb effect or not. This should help you to know which version of effect you should use.

“You will need to effect these edits by tomorrow.”

Effect is being used as a verb here because you can see that somebody is telling somebody else that they will need to make the edits by tomorrow. The verb effect can be replaced by ‘bring about’ or ‘achieve’ in this sentence and it would make sense.

“We can not effect a change this late on.”

Again, effect is being used as a verb here as into effect, to bring about a change, or to achieve something.

The Main Difference Between Affect and Effect

Primarily, “affect” is used as a verb. That means that it is performing an action on something or someone. The actions that have been taken by one thing “affects” the state of the other. In other words, when something “affects” something else, it changes it or has an impact on it. For example:

The word “effect” is usually used as a noun. In most cases, it shows the result of something that has occurred. So when something “affects” something else, the result is an “effect.” Let’s take a look:

There are also a few more points to address. While we can “effective” as an adjective to describe something, we wouldn’t say something is “affective.” “Effective” means that something works well or that it has the desired “effect.” “Affective” is a word usually associated with psychology. This refers to mental states, moods, or conditions.

So let’s look at some more examples and see which ones use affect vs. effect the correct way taking climate change as an example:

1. When the effects/affects of climate change become worse, the economy will change.

2. Walking or taking public transportation is an effective/affective way to reduce carbon pollution.

3. That’s because when fewer people use cars, it effects/affects the amount of carbon we produce.

4. If people used cars less, the effects/affects would greatly help reduce the impact of this issue.

So, how did it go? Do you know the answer?

Numbers 1 and 2 should be “effects” and “effective.” For number 1, we use “effects” because it is something that has already happened (the result). For number 2, we should use “effective” because the focus of the sentence is more about reaching the desired goal and doesn’t really deal with psychology, state of mind, or someone’s mood.

Numbers 3 and 4 should be “affects” and “effects.” In number 3, the action of not using a car directly impacts the amount of carbon that is put into the air (an action is being taken that changes it). In number 4, we are talking about what results the previous action would bring about. In this case, it isn’t something that happened, but something that is likely to happen as a result of future actions taken (just remember that results have an “effect”).

Other Important Differences Related to Affect vs. Effect

The reason why there might be confusion between these two words is that it seems that affective comes from the verb affect which has a completely different meaning. However, if you remember that actually it comes from the noun affect and has to do with emotions, you won’t have any problems with using this word correctly in a sentence.

There is a general rule that will help you remember which word needs to be used when. Things that already exist are affected. However, things that need to be created, that didn’t exist before, are usually effected.

Differences between Affect and Effect | Affect vs. Effect Chart