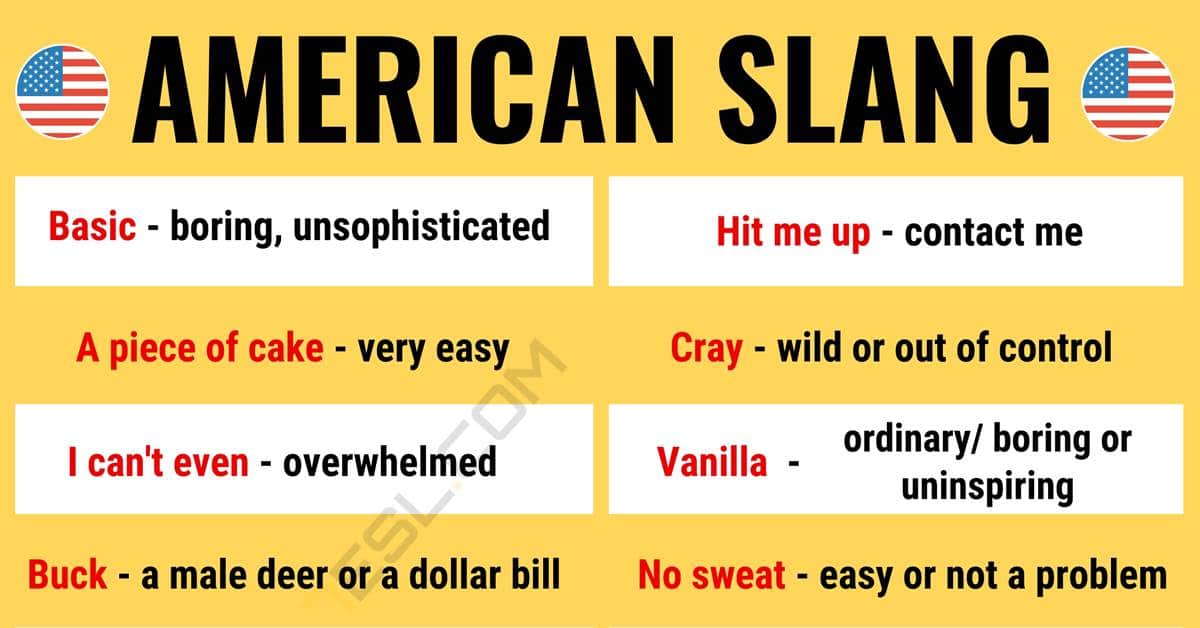 American slang! Here you will find a useful list of common American slang words with meaning and examples. Learning these slang terms will help you sound like a native in daily English conversations.

What Is American Slang?

For native speakers who have grown up hearing the same phrases and expressions, it can be easy to overlook just how strange they are. Such is the case with a number of American slang words. Sayings like “piece of cake” and “put lipstick on a pig” might not faze someone born in the U.S., but they’re almost sure to leave foreigners scratching their heads in search of fictional cakes and pigs. The difficulty of understanding American slang is further compounded by the fact that the Land of the Free encompasses 50 different states, each with its own unique regional dialect and speech idiosyncrasy. In this lesson, you will learn some awesome American slang words with their meanings.

Below, we break down just a few of the more common American slang words used universally across the country, as well as those you’re likely to hear in specific areas.

Use these slang words and phrases anywhere across the continental U.S. – even if you’re not a native speaker, you’ll soon be sounding the part!

Its most recognized definition is as an adjective, to mean simple or fundamental. But Americans have also adopted this word to refer to someone or something that is boring, unsophisticated or mainstream. A basic b*tch likes drinking pumpkin spiced lattes from Starbucks in the fall, for instance.

This versatile phrase can be used in three ways: (1) to agree with someone, (2) to emphasize a statement and (3) to ask whether someone is joking. If Johnny tells you he can hold his breath for five minutes, you may check his ego by asking, “for real”? (Spoiler alert: he probably can’t). Which brings us to…

This is when someone reveals a previously unknown aspect of something that you would have preferred to learn about on your own. When your friend watches the new episode of your favorite TV show without you (and let’s face it – what kind of friend would do that?!), you might preface your next convo by insisting that he/she not reveal any spoilers.

This list is cray! JK, not really. Americans use the word “cray” as an abbreviation of the word “crazy” to intimate that something is wild or out of control. “JK” is internet slang for “just kidding”.

Americans may say “I can’t even” to express a feeling of being overwhelmed (either in a bad or good way). This is usually meant in a playful and joking manner.

Apparently vanilla ice cream is not a fan-favorite in the U.S., as “vanilla” is used to describe someone or something that is ordinary, boring or uninspiring. It serves a similar purpose as “basic”, although at least “basic” has the distinction of implying someone is a slave to mainstream trends. “Vanilla” doesn’t merit that recognition. Just as vanilla ice cream is seen as a very normal flavor, a “vanilla” person is someone with a plain and unexciting personality.

A “buck” is both a male deer and a dollar bill – but when someone says “give me the buck”, they’re referring to the latter.

You sweat when you’re exercising. A sweaty person has clearly exercised effort to do whatever it is they are doing. Similarly, “no sweat” is a way to say that something is easy or not a problem. You want us to help you out with examples of common American slang? Sure, no sweat.

The not-so-serious abbreviation is short for “you only live once”. It is along the same lines of the Latin “carpe diem” (seize the day), though with much less serious undertones. YOLO was popularized by American rapper Drake, and acts as a call to live life to the fullest. Eat that whole pizza. Go to that party. Make out with that cute guy/girl at the bar. YOLO.

“Fear of missing out” is a real worry for many Americans, apparently.

To mess up or make a mistake.

Short for legitimate (meaning authentic or real), Americans say “legit” to affirm that something is good or worthwhile.

This is most commonly used as text or email slang. If your crush texts you to hang out, you don’t want to seem too eager, right? Right. So resist the urge to text back a bunch of heart-face emoticons, and try just writing “K.” That’ll keep ’em on their toes.

Please, no hitting your fellow Americans. “Hit me up” is used to tell someone to contact you. You may additionally hear someone ask you to “holler at them”, meaning to give them a call.

The dictionary defines “binge” as an “excessive indulgence”. Given the rise of “Netflix and Chill” culture, it’s common for Americans to admit to “binge-watching” a favorite TV show.

Unfortunately, there are no literal cakes involved with this slang phrase – but wouldn’t it be great if there were! Instead, a piece of cake refers to something as being very easy.

This one is a little more obscure – but we stuck it in here just to double check you’re paying attention. When someone says “that’s for the birds”, it could mean anything. Birdseed? Does something have feathers? Is “birds” supposed to be some kind of metaphor you’re missing? Nope, none of the above. “For the birds” actually means that something is trivial or worthless.

Kudos means “congrats” or “great work”! It can be used in all situations.

This was once a baseball term. If a game was rained out, spectators received a “rain check”, or a ticket admitting them entrance to a future ball game. These days, it has ceased to refer to literal weather, and broadly means that an event will be re-scheduled for a later date.

“Jones” has its roots in narcotics, as it was a term previously used for a heroin addiction. Now, the word can be applied to anything. In the context of American slang, “jonesing for” means to be craving something. Right now we’re jonesing for a glass of wine, for example.

Whether it’s listening to a boring presentation or trying to make sense of a dense textbook, we’ve all zoned out before. This common slang phrase means to get distracted and lose track of whatever is happening around you

While it may sound like the speaker is wishing someone ill, the exact opposite is true. Telling someone to “break a leg” before a performance is actually a term of good luck.

24. To feel blue or have the blues

Just as the color blue can be associated with emotions of loneliness or melancholia, Americans use this slang phrase to express sadness.

Nope, it doesn’t actually have anything to do with cheese. Something that’s cheesy is cheap or tacky, such as a cheesy pick-up line or a cheesy movie.

This words has a plethora of meanings. In the context of slang, “crash” can mean to go to sleep quickly and suddenly (for instance, “I crashed as soon as I got home”) or to show up somewhere without invitation. The popular American film Wedding Crashers features titular characters who show up uninvited at weddings to meet girls. Hijacks ensue.

This isn’t what you think. Americans use “dead” to describe bars and clubs as empty, quiet or sad – for instance, “let’s get out of here; this place is dead anyway.”

If someone is driving you up the wall, they’re likely irritating you.

Previously, Americans would dial 411 to reach directory assistance and be provided with information. While this is no longer common, 411 lives on in slang speech. Asking someone the 411 is the equivalent of asking “what’s the gossip” or “what’s the info”.

Here’s a case where you can translate literally. If a person “feels you”, they are quite literally feeling, understanding and empathizing with what you’re saying.

How’s the weather? Did you have a nice weekend? Workin’ hard, or hardly workin’? Americans refer to this small talk as shooting the sh*t.

Hold up! Wait just a moment.

In soccer, an offensive player’s aim is to score a goal. Similarly, to score is to achieve something you want. Upon receiving a candy or video game, little kids might gleefully yell “Score!” For teenagers and adults, saying they scored with that guy/girl last night usually implies sexual connotations.

This extremely common phrase refers to something that’s non-stop or around the clock – for example, “Walgreens is open 24/7.”

Shotgun is the front passenger seat in a vehicle, so-called because of the position of the shotgun-armed guard on a horse-drawn carriage or wagon train. If someone calls shotgun today, they are announcing their intention to sit in the passenger seat.

Usually spoken in conjunction with food or drink, you can say something hits the spot to express that it was exactly what you needed.

A non-English speaker might be asking what a rocket has to do with the conversation at hand. For a native speaker, “it’s not rocket science” explains something by hyperbolically stating what it is not. Something that’s not rocket science isn’t difficult; therefore, it’s easy.

While the U.S. was once a sprawling map of hyper-localized speech, the technology age has helped homogenize the way we speak to one another. That being said, Americans have still retained a few regional gems – most notably words like “whoopensocker” (Wisconsin) and “shoots” (Hawaii).

The quintessentially Boston word is liberally used in place of adjectives like “really” or “very”. It is believed to have originated around the 1600s, in conjunction with the Salem Witch Trials in Massachusetts. During this time period, the demonology-obsessed Puritans used the word “wicked” to describe accused witches. Over time, the adjective gradually transformed itself into an adverb, morphing from “wicked” to “awful” and finally “awfully” – which carries a similar meaning to today’s intensifiers like “really” or “very”.

This word is essentially a cuter version of “whopper”, and describes something to be exceptionally large – for example, that’s a whoopensocker of a pizza!

Originating from the 19th century, this is a variation of the word “catawampus”, which roughly translates to “destructive”. Because in Alabama, things aren’t ever sideways or messed up. They’re “cattywampus”.

Hawaiians substitute this word in for “yeah” or “sure”.

Y’all is a proper contraction but you’ll never hear a true Southerner say “you all”.

6. Pretty as a peach (Southeast)

If you live in a state known for its peaches (we’re looking at you Georgia), then comparing someone to a peach is as good a compliment as it gets.

The East Coast calls their storms “nor-easters”, but Texas wins for the most creative storm name. A Blue Norther is a fast-moving cold front marked by a rapid decrease in temperature, and sometimes dark blue skies. The cold front swoops down from the north (hence norther) and beware – a Blue Norther can send temperatures plummeting by as much as 20 or 30 degrees in mere minutes.

8. To have a hankerin’ for (Southeast)

You’re likely to hear this in the Deep South. It means to have a craving for something (usually food).

Congratulations! You’re now well on our way to sounding like an American. Well, unless you zoned out reading our list … 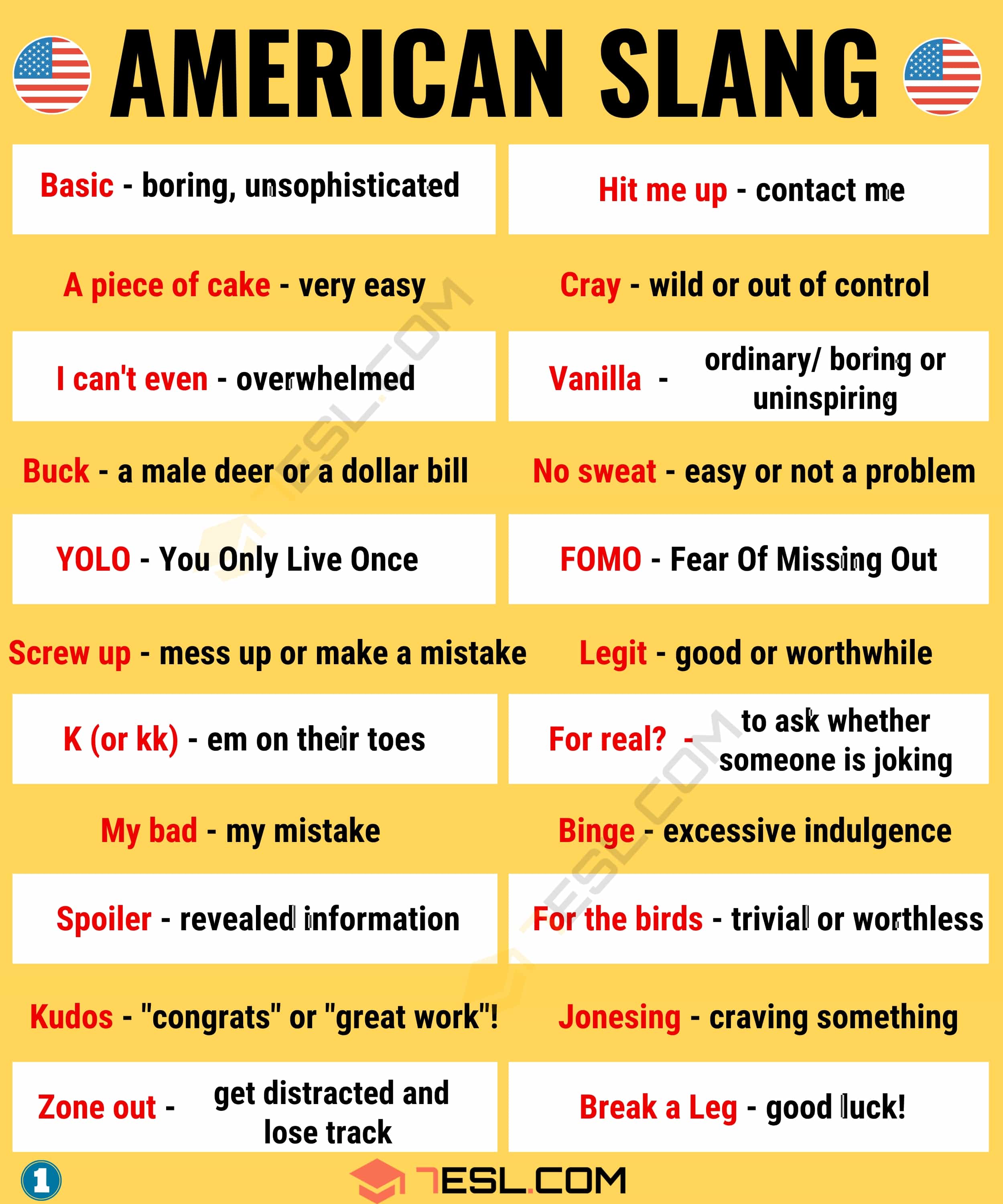 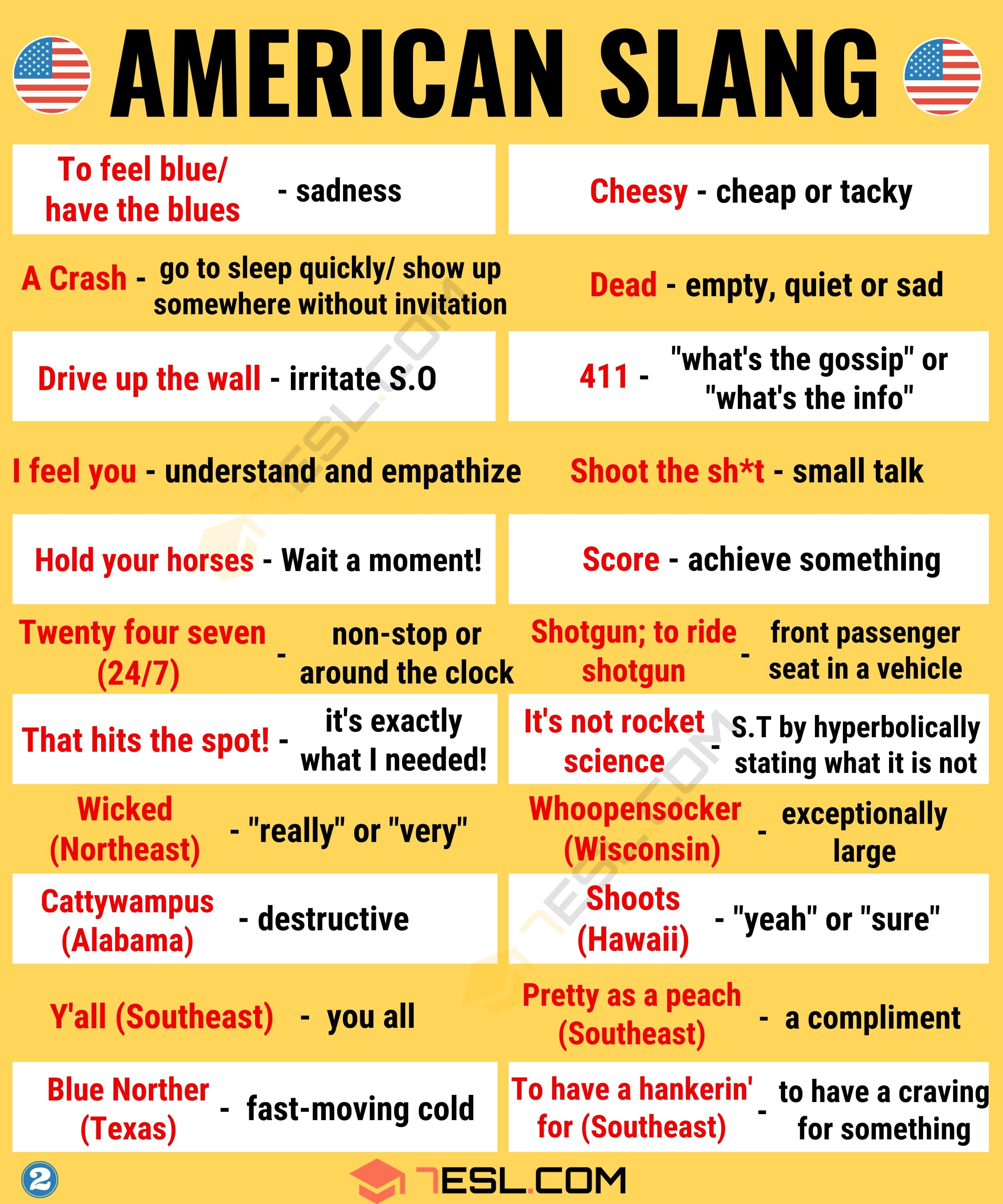 We said bad english words all the time and we did it it was in for the groups to speak english and that is kind of things to say and their stealing candy at the own stores!!!!