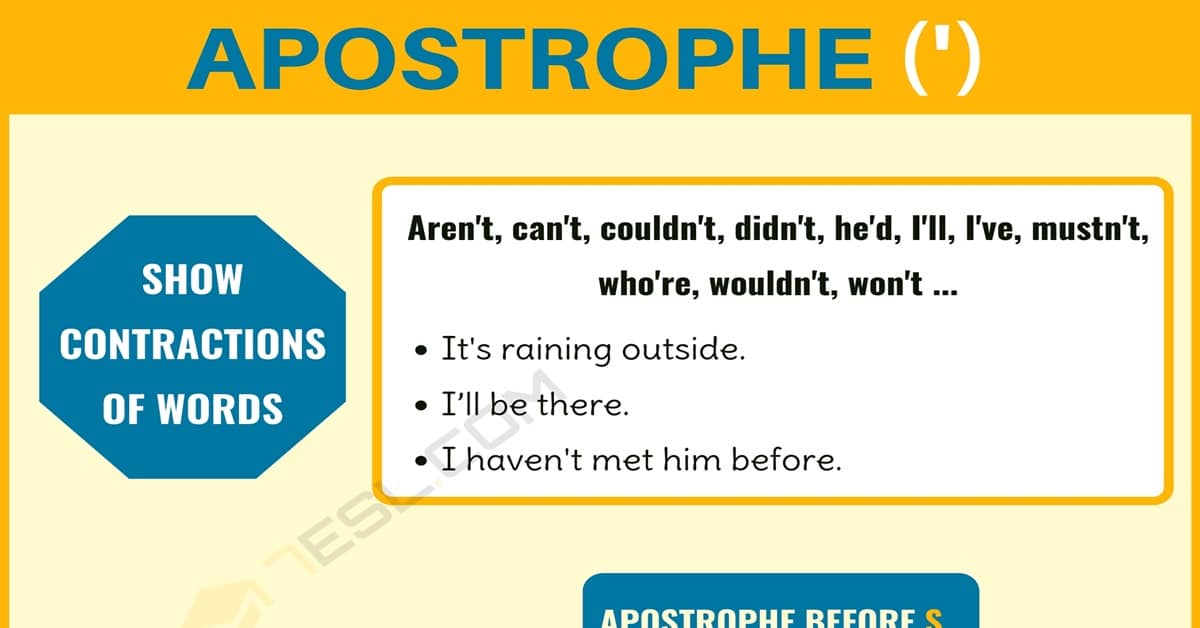 What is an apostrophe? We use apostrophes for three major reasons, and whilst most people use them without even thinking about it, there are plenty of people who make mistakes with this punctuation mark. These mistakes are much more common than people realize, so this guide will take you through everything you need to know about apostrophes. From what they are, when to use them, and the common mistakes that we see people making accidentally. At the end, we’ll test your new knowledge with an apostrophe-based quiz that’ll highlight just how much you’ve learned and prevent you from making the common mistakes we’ll be covering throughout this guide!

What is an apostrophe? The symbol (‘) is called an apostrophe in the English language. It is an important punctuation mark which is often used incorrectly in English.

What is an Apostrophe?

An apostrophe is used to show that certain letters have been omitted from a word (contractions, i.e. she’s, it’s…). The apostrophe symbol can also be used to show the possessive form of a noun (possessive apostrophe, i.e. John’s books,…), in addition to indicating the plural form of lowercase letters.

An apostrophe is a punctuation mark that we use for one of three principal reasons:

We use an apostrophe for one of three major reasons. To show possession, to show contraction, or to show plurality for letters, numbers, and symbols. There are certain nuances in using apostrophes that you have to be aware of, such as with ‘Mr. Roberts’ vs Mr. Roberts’s’ but if you stick to one style, then you won’t go wrong. With apostrophes, as with most things we cover in these guides, practice will make perfect, and the more you expose yourself to different writers using apostrophes, the better.

Below, we’ll show you what we mean by that in some more detail and provide you with some examples.

When to Use an Apostrophe

When we use an apostrophe to show possession, we typically place the punctuation mark at the end of a noun followed by the letter ‘s’. This shows that whatever comes next belongs to the noun with the apostrophe. Here’s an example to make that clearer:

Sometimes, the noun that we are showing possession with already ends in the letter ‘s’. Here, different writers approach what to do differently. We’ll provide you with different ways to write it if, for example, we were writing about a character named Mr. Roberts. Here are the different ways that people might approach it:

*Please note, there is also a third way to approach this. Some writers would simply write the word how they would say it. So with Mr. Roberts they would be more likely to write is as ‘Mr. Roberts’ car’ because that would be how we would pronounce it. For a name like Mr. Jones, however, they may write it as ‘Mr. Jones’s car’ because we would typically pronounce it in that way. Again, it really is a decision for the writer unless there is a style that you must stick to for a particular reason, such as work.

This is the second most common way to use an apostrophe. When using an apostrophe to show contraction, we place an apostrophe within a word to show that we are omitting some letters of two separate words, and forming them into one. Here are some common examples that you have probably already used in your writing without thinking:

The list is endless, but you can understand the point. There are plenty of different words that we typically contract, the trick is knowing where the apostrophe goes. Unfortunately, there isn’t a hard and fast rule, so knowing how to use an apostrophe for contraction comes down to exposure. In the examples above, the contraction seems logical, because we omit part of the second word in all four cases, the ‘o’ from not in the first two examples, and the ‘ha’ from have in the second two. But this logic doesn’t always continue, for example:

Here, there isn’t a clear logic to the contraction, so again, knowing how to write certain contractions simply comes down to seeing other people use them correctly.

To Show Plurality (for Letters, Numbers, and Symbols)

Whilst some writers approach the rules surrounding apostrophes in slightly different ways, it is generally agreed upon that when we show that there are multiple letters, numbers, or symbols we use an apostrophe and an ‘s’ to avoid confusion. For example:

When Not to Use an Apostrophe

There are some cases where individuals use an apostrophe when it isn’t necessary or else use them inappropriately. These cases are relatively common, so we’ll look at some of the most common mistakes to help you avoid them yourself.

A regular noun is a noun that simply adds an ‘s’ or ‘es’ to the end to show plurality. In these cases, mistakes are common when trying to show plural possession. For example:

More than One Person Possesses it

Sometimes you may need to write a sentence in which more than one person possesses something. Here, only ever put the apostrophe and the ‘s’ to show possession after the second name.

A contraction is a shortened version of the written and spoken forms of a word, syllable, or word group, created by omission of internal letters and sounds.

The apostrophe is used to show the contraction of words in a sentence.

In most cases, we add an apostrophe before s for singular nouns to show possession. For example, dog owned by Jack -> Jack‘s dog, wallet belongs to Jim -> Jim‘s wallet, etc. 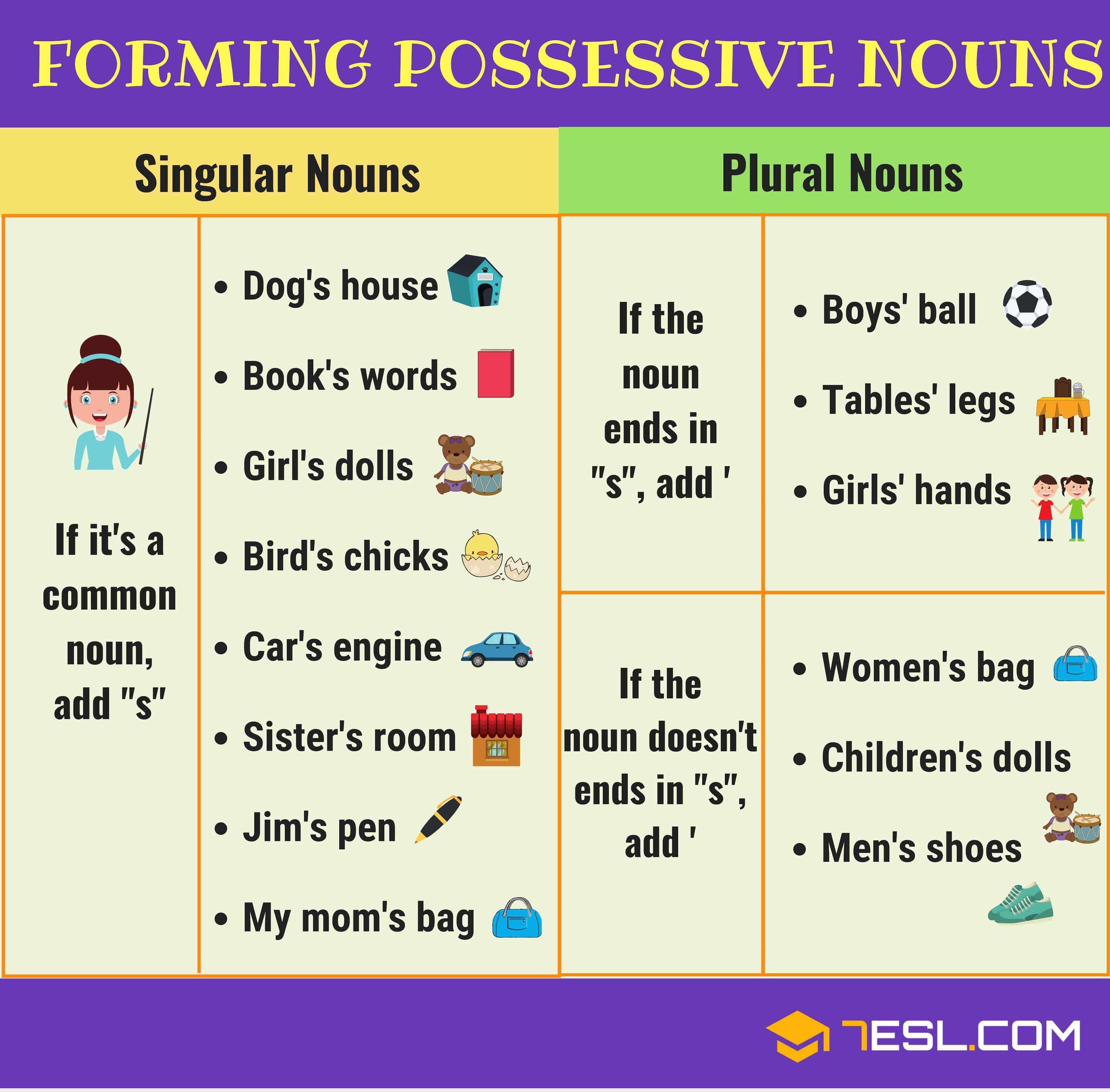 For plural nouns, we simply add an apostrophe after s except for those few plural nouns that do not end in s.

We use an apostrophe and an –s to indicate the plural form of lowercase letters. 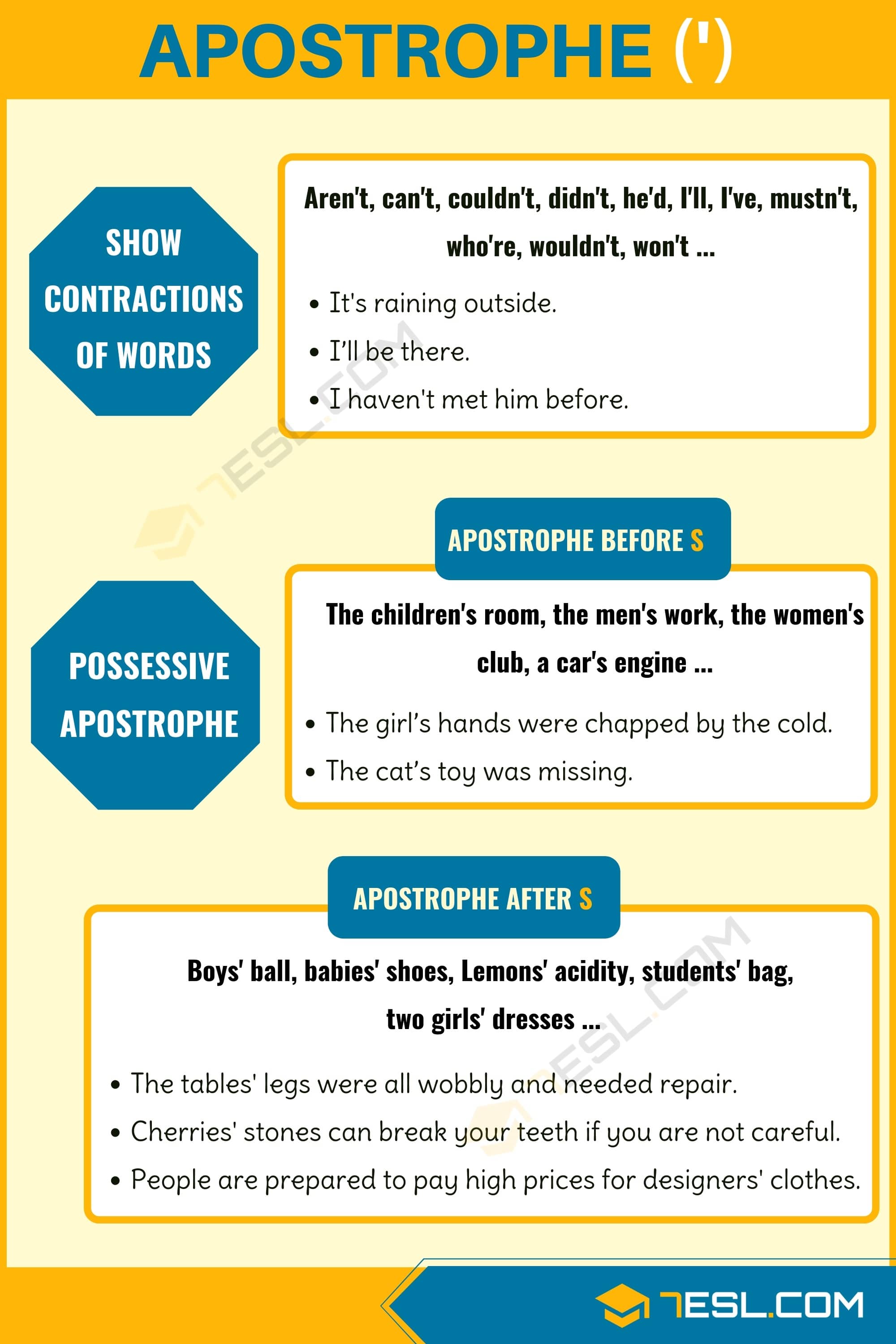 Do you see the confusion when we don’t add an apostrophe and ‘s’ to the end of letters, numbers, and symbols. It should be:

We are showing plural possession of a regular noun. Writing it as ‘The girl’s dinner was delicious’ suggests only one girl made the dinner.

Anonymous
Reply to  A Baker