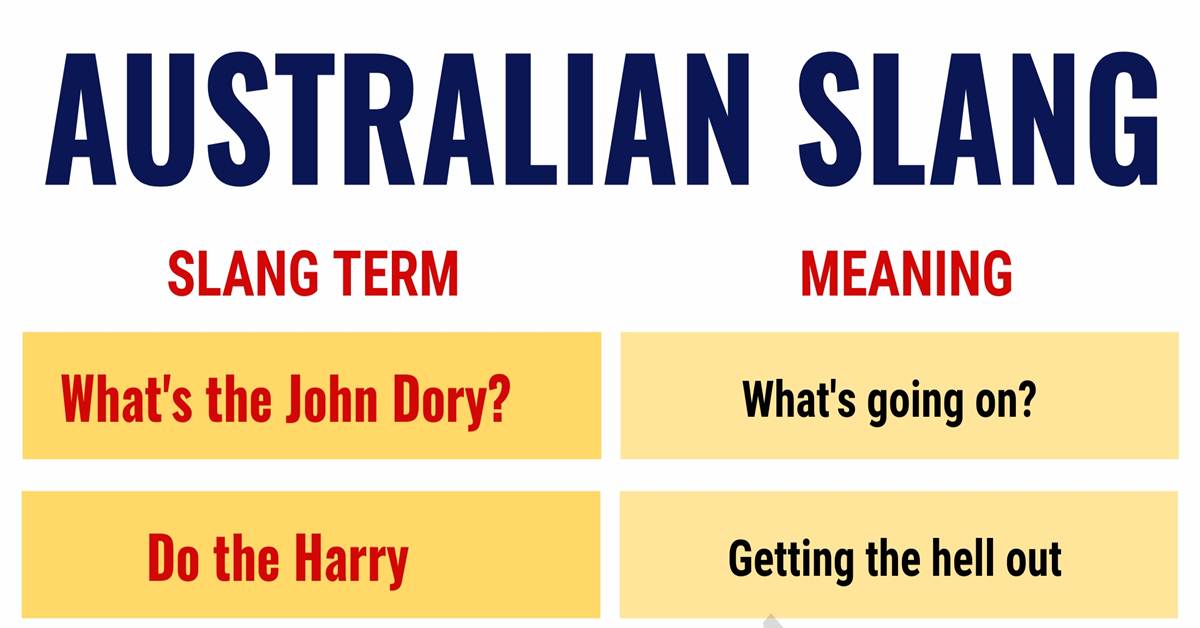 Australian Slang! What is an Australian slang word? Here you will find a useful list of most popular Aussie slang words with meaning, examples and ESL printable infographics.

One distinctive feature of Australian slang is to shorten words with soft vowels like “ie”, “a” or “o”. These abbreviated words make conversation more informal and help give the language its trademark friendly vibe. The earliest appearance of shortened words in the written language dates back several centuries; in fact, the story goes that this manner of speech developed to speak words faster and thus prevent flies from getting in the mouth. Aussie slang is more recognizable for its abbreviations than its phrases, but that doesn’t mean you won’t hear it all. Aussie slang isn’t used regionally, so no matter which city you choose to visit, you’ll likely hear at least a few of the below common phrases.

The Origin of Australian Slang

With its white-sand beaches, plethora of exotic wildlife, and gorgeously varied landscape, Australia attracts tourists from all over the world. For English-speakers, the language commonality is an extra pull – but Australian English is more than just an accent. Australia was established as a British penal colony in the 1800s, so the language naturally shares a number of similarities with British English, but still comes imbued with its own unique set of idiosyncrasies.

Whether you’re confused by local talk or hoping for your Aussie citizenship, we’ve got you covered. Master the following, and you’ll be fair dinkum, mate.

Following is a list of 20+ popular slang words that commonly used in Australia. Good onya for reading our list! We have faith you’ll be a true blue in no time.

This one has its roots in English slang. Cockney is conspicuous for its sing-song, rhyming style, and “John Dory” rhymes with story. While an actual John Dory is a fish found in Sydney Harbor, this phrase is asked when someone wants to know the gossip, or what’s going on.

Harry Holt was a prime minister who mysteriously disappeared in 1967. While some suggest he may have been abducted, others believe he quite literally bolted from the responsibilities of his political role. Either way Harry lives on in infamy, as Australians refer to someone getting the hell out as “doing the harry”.

If an Aussie can find a way to shorten a word, they will. A smoke break turns into “smoko,” a liquor store is a “bottleo,” “definitely” becomes “defo”, and “afternoon” gets gutted down to “arvo.”

This phrase derives from indigenous culture, as “walkabout” was a foot journey taken by Aborigines into the bush in order to live according to traditional indigenous practices. Today, many native Australians enjoy going “walkabout”, for example backpacking, traveling, hiking, etc. If you’re looking for someone only to be told they’ve gone “walkabout” – don’t worry too much.

Also spelled “bonza,” it means “excellent” or “great” – essentially the Australian equivalent of the American “awesome.” This truly versatile word can be used as an adjective (“bonzer mates”), a noun (“that concert was a real bonzer”) an adverb (“that food went down bonzer”) and an exclamation of joy or agreement (“BONZER!”).

In the land down under, the diminutive “ie” suffix is just as common as “o”. Case in point, the word “bikkie”, which takes inspiration from the British “biscuit.” Australian slang is full of words just like this. “Barbie” is short for “barbecue”, “brekkie” is short for “breakfast”, and “Aussie” is widely recognized slang for “Australian”.

Oz is known for its unforgiving sunshine and humid tropical heat. To go troppo refers to the daze brought on by such heat, and means to go crazy.

What list would be complete without the most classic of all Aussie slang? “G’day” combines the word “good” and “day” into one.

The pejorative term refers to a redneck or uncultured person. Popularized by the Australian show Bogan Hunters, a bogan is considered white trash, typically someone with a mullet and/or bad teeth, who engages in uncivilized behavior.

RIP Steve Irwin. We will never forget your bewildering (yet endearing) love for some of nature’s fiercest reptiles. Crikey is an exclamation of surprise, often interchangeable with “blimey” or “holy sh*t”.

It’s not what you’re thinking, OK? Thongs are sandals.

True. If you ask an Aussie about the best country in the world, they’re likely to respond that no other place beats the land down under. Deadset.

There’s the outback, and then there’s the woop woop. The phrase loosely translates to “middle of nowhere” or “the boonies.”

A friend’s discount. If you have a friend working at your local bar, then lucky you; you’re likely to get a few pints at a mate’s rate.

Named in honor of the first Brit to map eastern Australia, Captain James Cook, this phrase means to have a look or brief inspection.

No worries mate; everything’s going to be OK.

We’ve all got that friend who has more than one drink and immediately starts lurching around and making a fool of themselves. A two-pot screamer is someone who can’t hold their liquor. They might be better off keeping the boozing to a minimum.

We’ve never met a pork chop we didn’t like, but apparently the Aussies have. To carry on like a pork chop means to act unreasonable.

22. Have a roo loose in the top paddock

Similarly to the American phrase, a few fries short of a happy meal, this Australian colloquialism describes an intellectually impaired person. And the more loose roos, the more moronic the person.

To have a go at something. Sure, we’ll give it a burl. 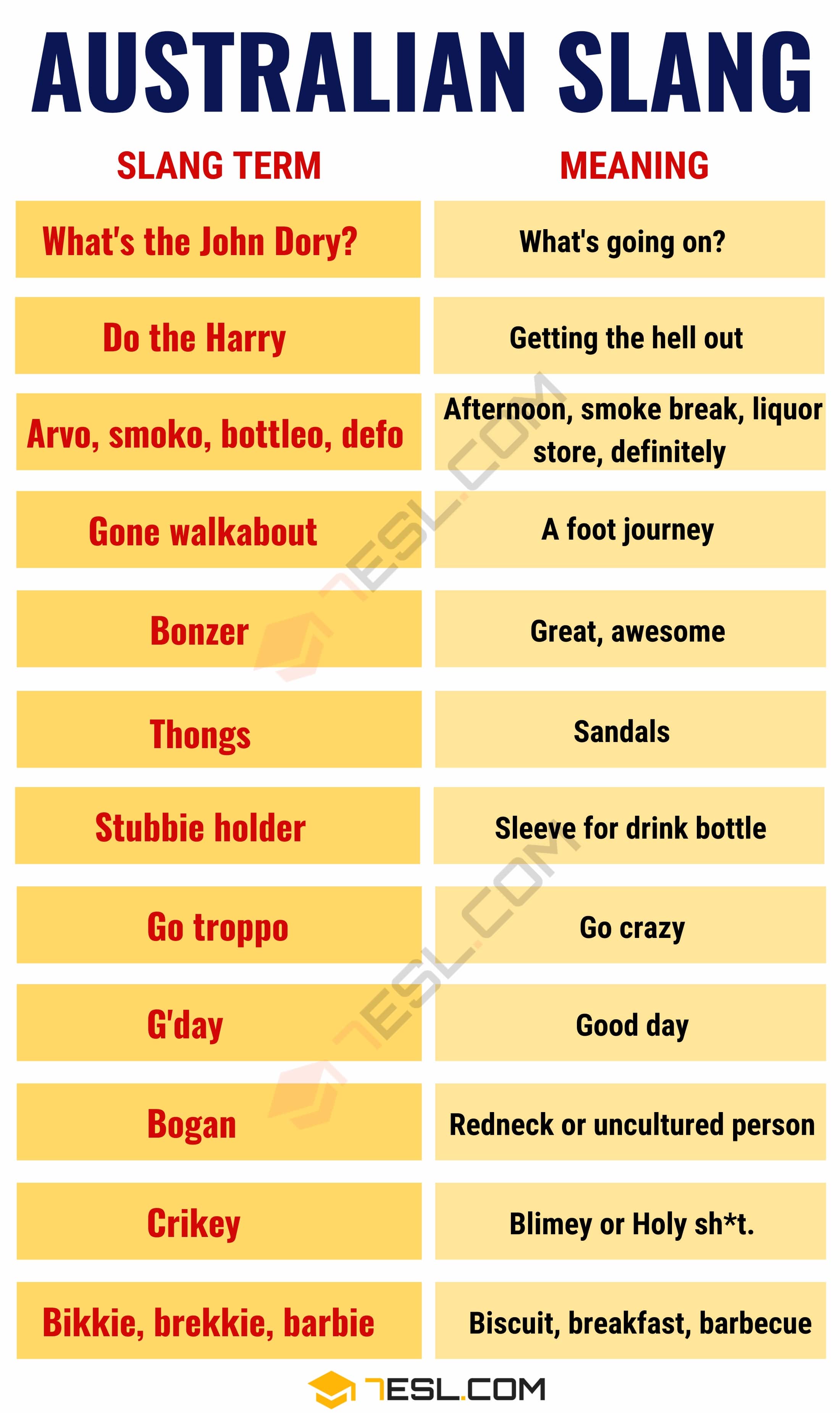 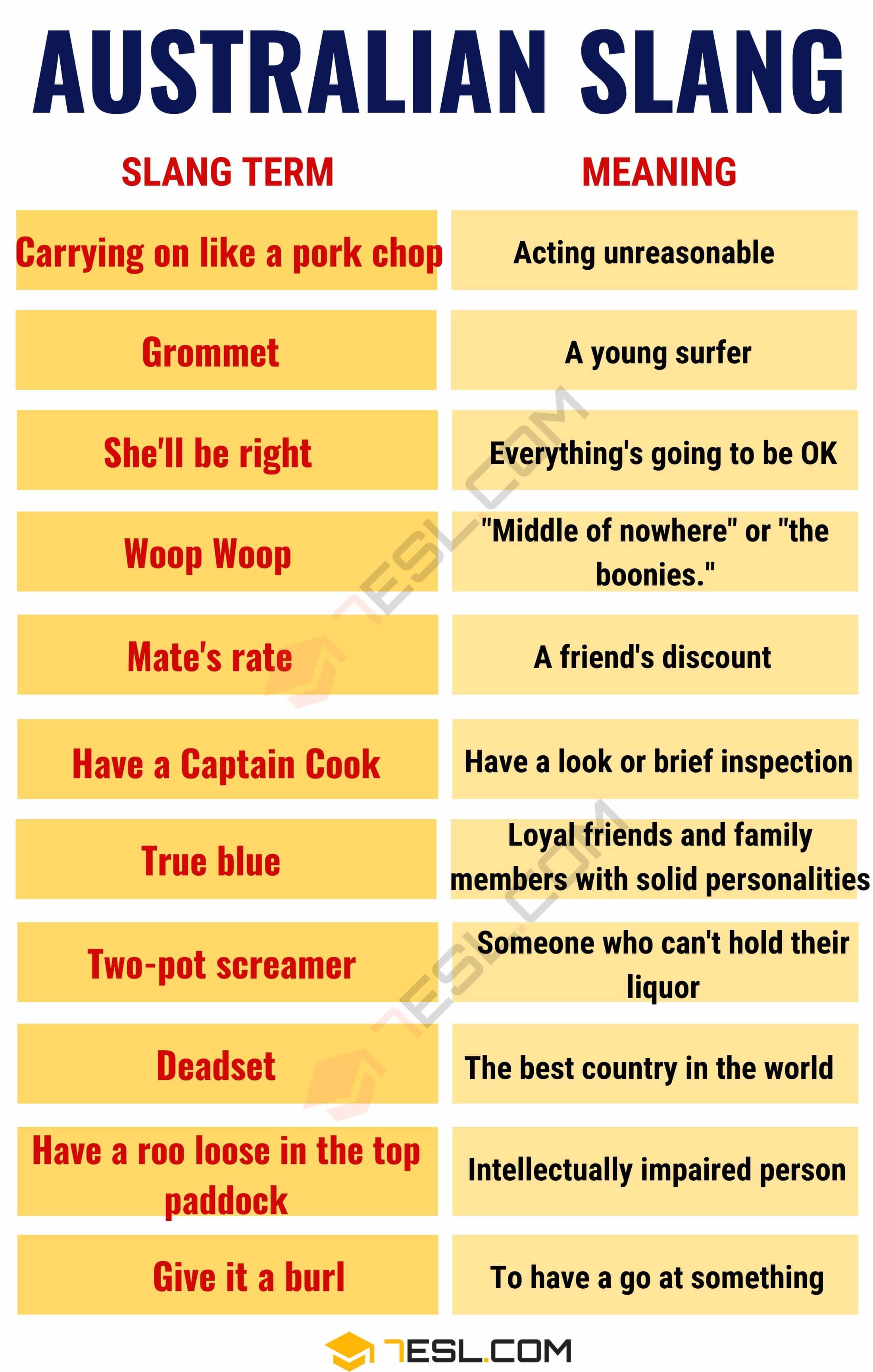