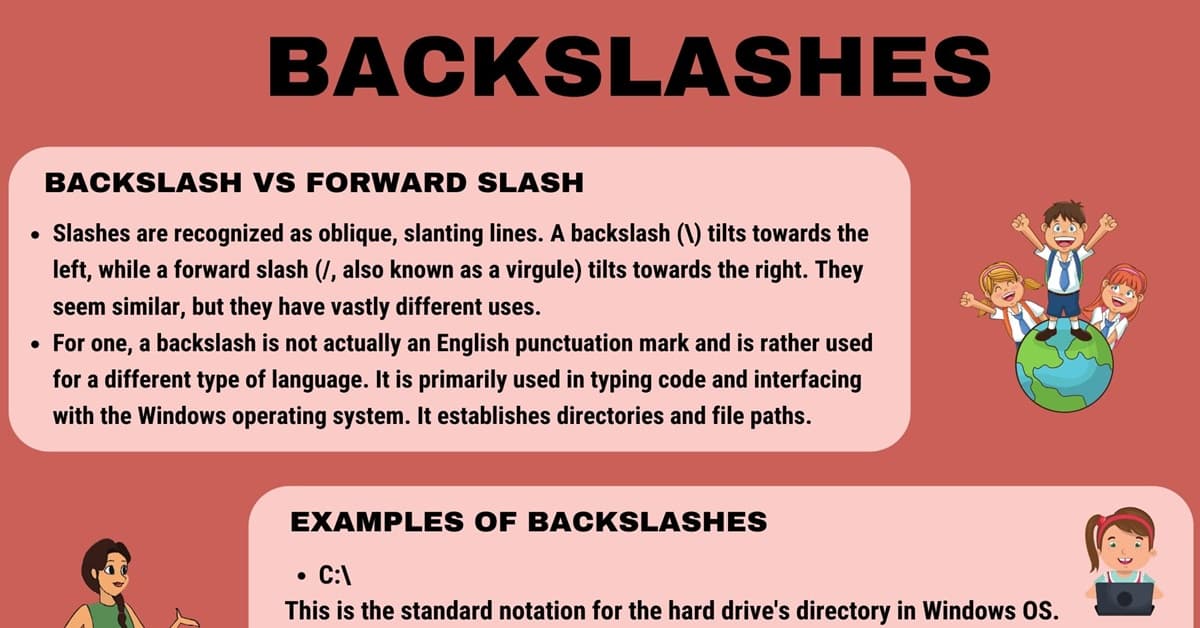 Backslash! A punctuation mark in English is used to separate ideas into coherent packages. You are probably familiar with commas, semi-colons, apostrophes, and dashes. Slashes are also used to categorize words. However, their functions are a bit more complicated than just ending ideas.

For one, a backslash is not actually an English punctuation mark and is rather used for a different type of language. It is primarily used in typing code and interfacing with the Windows operating system. It establishes directories and file paths.

This is the standard notation for the hard drive’s directory in Windows OS.

This notation points to an image file “IMG” located in the “Pics” folder which is found within the “F” directory.

Backslashes are never used while writing in English. That function goes to the forward slash.

When and How to Use a Forward Slash

Tech savvy individuals will notice forward slashes are used to separate parts of website addresses on the internet.

When taking notes during a lecture, you may have used slashes to abbreviate certain words to save yourself time. You may have also seen this format when filling out an application.

We use slashes when writing the date:

When notating a fraction we separate the numerator from the denominator via a slash.

You may have seen slashes (with spaces) used to indicate line breaks in poetry, songs, or plays. Note that it does not matter which punctuation comes before the line break, or whether there is the punctuation at all.

You never want to use a backslash where a forward slash is appropriate in English grammar. Remember that backslashes are strictly used only for code and interfacing with computer operating systems.

How to Use a Forward Slash 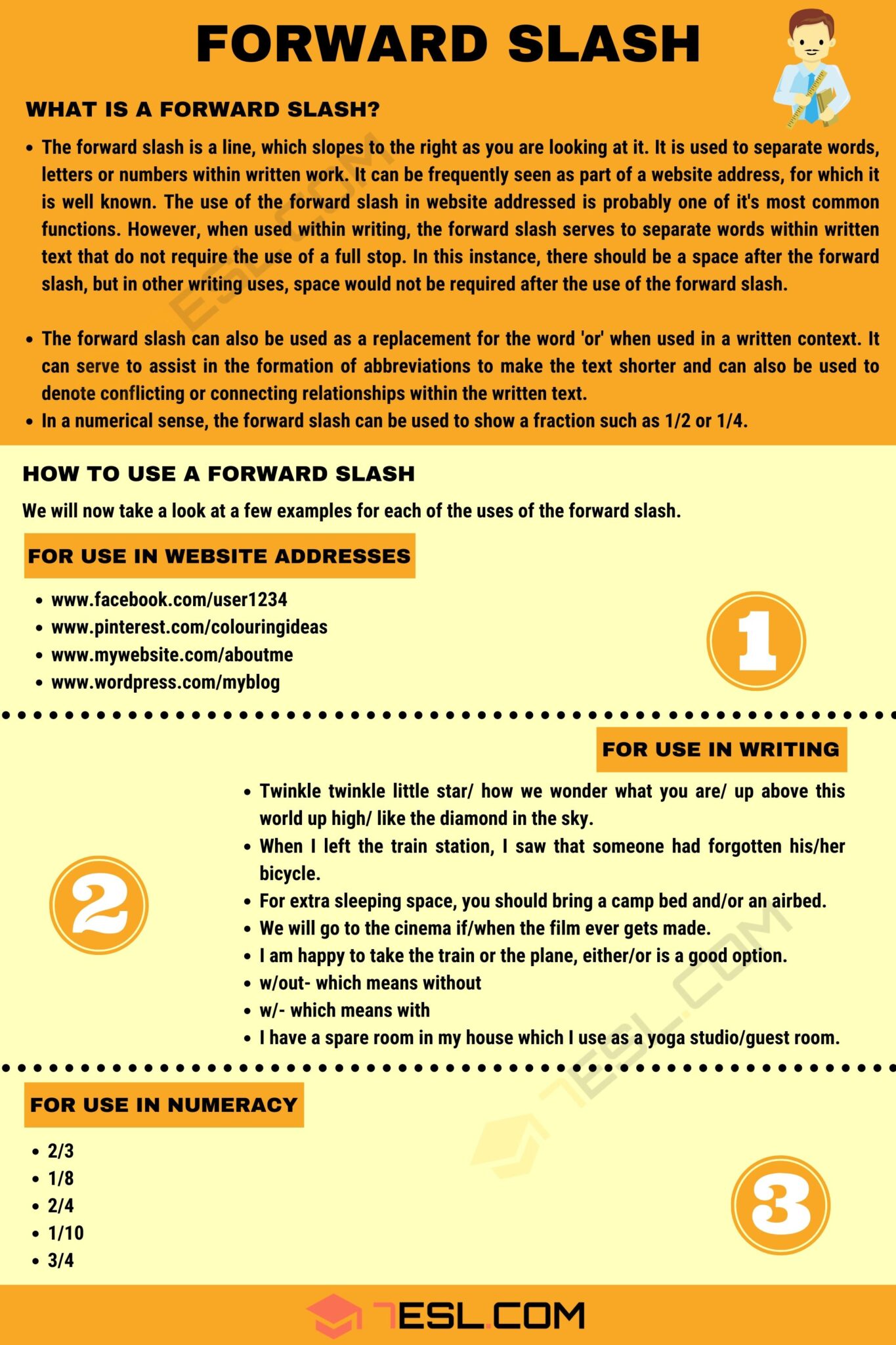 Why Does Windows Use Backslashes for Directories?

If you are a coder yourself, you may notice that forward slashes are used prominently in today’s coding programs. So why does the Windows OS primarily use backslashes to denote paths? The answer lies in its history of development.

In the original version of Microsoft Windows in the 1980s (MS-DOS 1.0 to be exact), the forward slash command had a specific use in the operating system. In fact, the first Windows OS had no support for directories or file paths. When MS-DOS 2.0 released with directory support, the creators had to figure out what command to use to notate file paths. They couldn’t use the forward slash since that would upend several programs already attuned to that format. Because it was already similar to the one currently in use, the backslash symbol becomes the indicator of file paths on MS-DOS.

Nowadays we don’t have to pay too much attention to which slash we use when interfacing with computers. Software publishers are aware of how confusing it can be for the average person to keep up with these nuances, so they design their programs accordingly. Most software programs will automatically correct a misused slash to the appropriate one. For example, typing https:\\www.google.com\ into most modern browsers will correct the backslashes to forward slashes and send the user to the website. Even some native Windows programs accept forward slashes as file path notation.

However, not all programs accept either slash. It may not be important for the average computer user to know, but for those with careers involving IT and technology, that could be the difference between finding the problem and a huge headache. 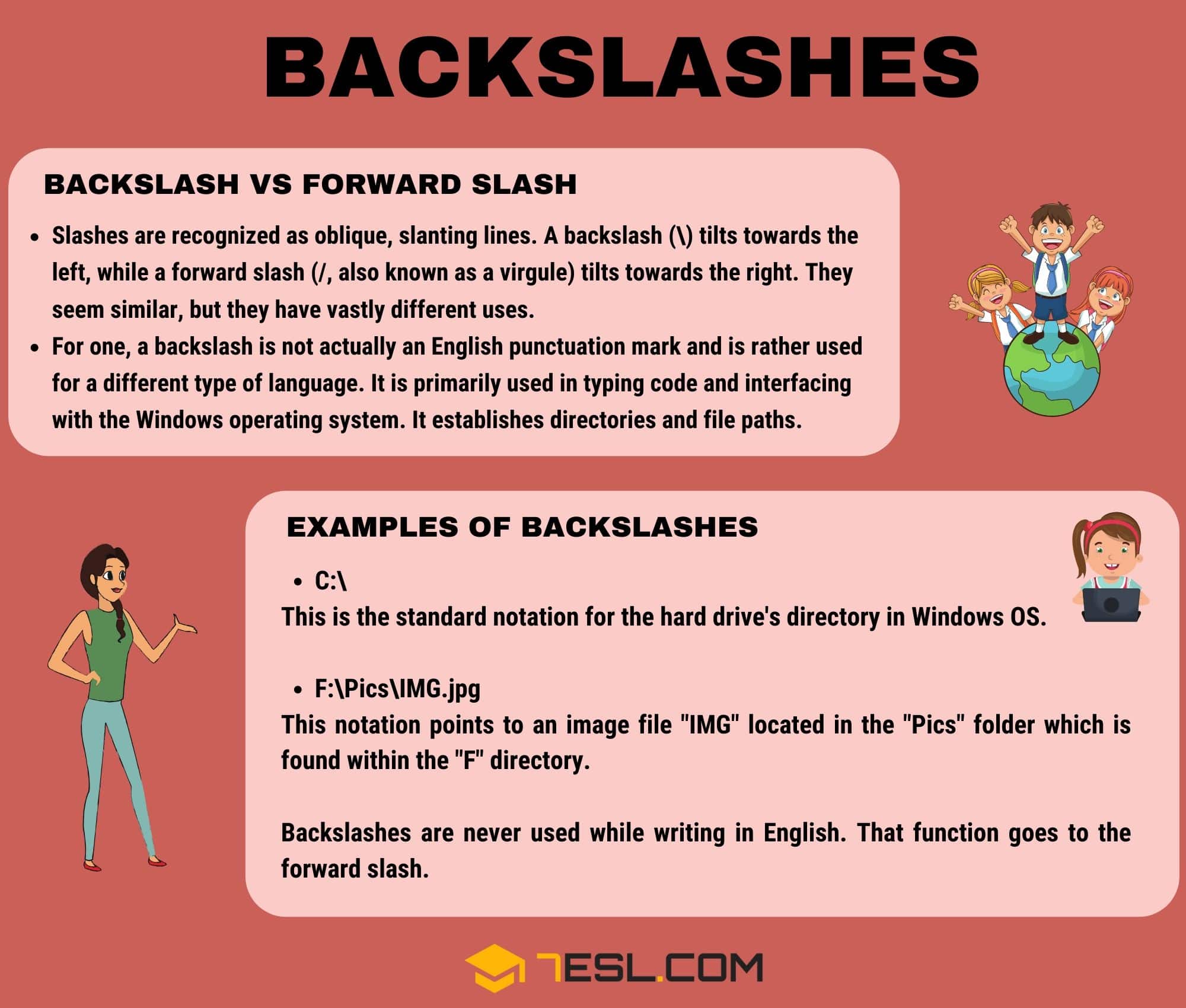 Now test your knowledge of backslashes and forward slashes with this simple “right-or-wrong” quiz. Enjoy, and remember the rules of both types of slashes!