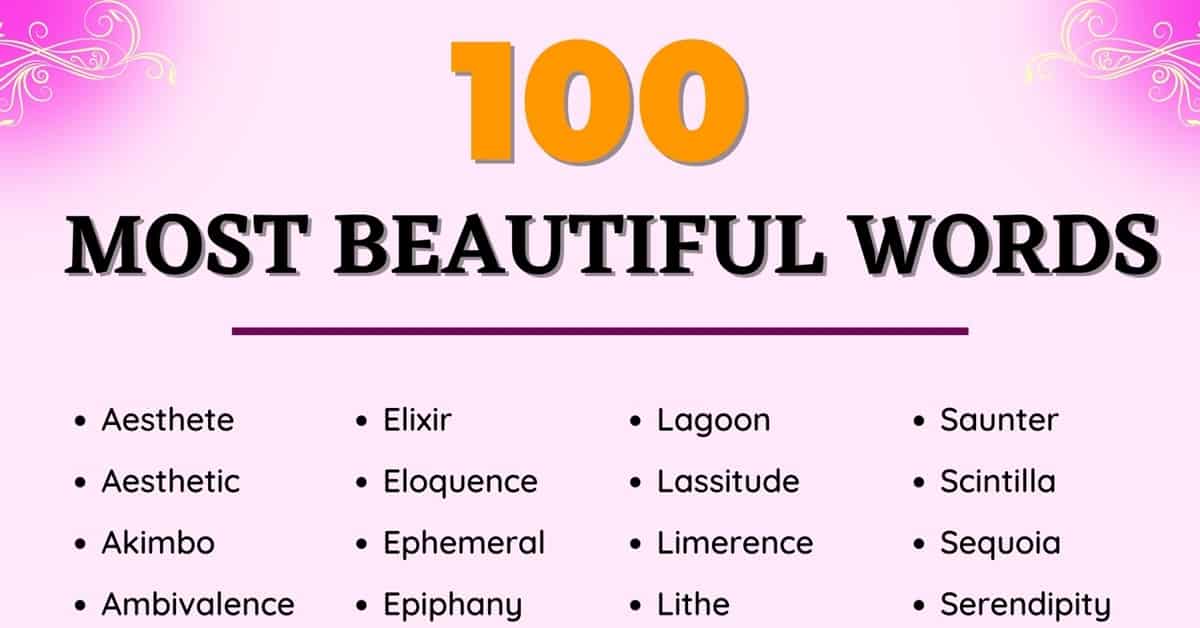 Although English isn’t considered a romantic language like Portuguese, French and Italian, there’s no doubt that it can be just as beautiful and if you’re looking to expand on your English vocabulary, then you’re in the right place because I’m going to be sharing with you 100 of the most beautiful words in the English language, as well as their meaning and examples.

The Most Beautiful Words in English

Natural streams of light in the sky

“Seeing the Aurora Borealis in person one day is on my bucket list.”

An intense feeling of happiness and well-being

“You are the cause of my euphoria.”

An occurrence in an event leading to happiness

“I hope serendipity will lead me to the right place.”

Protecting and caring for something or someone lovingly

“I will forever cherish this bracelet.”

A liquid which has magical and/or healing properties

“I have invented an elixir which will give you immortality.”

A never-ending amount of time

“I could do this for an eternity.”

An intense feeling of pleasure and interest

A state of being alone.

“I’m an extrovert, solitude just isn’t for me.”

A moment of sudden realisation of something

“When I was 11, I experienced an epiphany that not everyone gets treated the same.”

“I saw a silhouette through my curtains.”

An individual which is appreciative and sensitive to beauty and art

“He believes art critics are just a bunch of aesthetes.”

A red wooded tree; also known as the California redwood

“I love forests that have sequoia trees.”

When a group of words creates a hissing sound

“They closed their eyes and enjoyed the tranquillity.”

“I’m usually quiet until I drink alcohol, then I become loquacious.”

A very large amount of something

“I have a plethora of music to choose from.”

Handling something with extreme care

“She handled her baby brother with delicacy.”

“After a dark period of time, she finally started blooming.”

A person who deeply enjoys the rain

“I’m pretty sure I’m a pluviophile, I just love the rain.“

An intense feeling of happiness

“I was filled with felicity when I passed my exam.”

An intense desire to stay in bed

“My daughter definitely has clinomania, she stays in bed all day.“

The galaxy containing a solar system

“Most of the stars in the galactic atmosphere are billions of years old.”

“My balcony has such an idyllic setting.”

Something which may explode at any time

“I’m avoiding my sister because she’s in an incendiary mood.”

“The headteacher walked in, arms akimbo and yelled at our behaviour.”

Conjunction or opposition of the Moon and Sun

“Syzygy of the Earth, Moon, and Sun occurs during every single full moon.”

Something that is increasing at a higher level

“The number of students not wearing the correct uniform is becoming a concern.”

The action of combining more than one thing together

“In order to achieve a sunset sky, she conflated the colours.”

A circular-shaped object made to protect individuals from the rain

“My mother always reminds me to bring an umbrella to encase it rains, but I never listen.”

Another word for ‘rival’

“She was extremely upset when she found out that her nemesis won the competition.”

A cure to a disease

“Sadly, there is no panacea that will make cancer disappear from your body.”

“Most people agree that watermelon is the quintessential fruit of the summer.”

“A penumbra covered the whole city after a blizzard.”

“She claimed her sleeping baby had an ethereal appearance.”

“Penguins have vestigial wings since they can’t use them to fly as they are too heavy.”

“The murmurous haunt of mosquitoes at night.”

A small gift given as a sign of gratitude

“Whoever made a large purchase, would receive a lagniappe as a thank you.”

“My wife prefers to live in a bungalow since there are no stairs.”

“My favourite dish is ratatouille.”

“We couldn’t surf today, since there were no big waves, just ripples.”

A tiny amount of something

“Just give me a scintilla evidence and I’ll believe you.”

Another word for ‘beauty’

“The new girl in school is filled with glamour.”

“The blue lagoon was filled with tropical fish that swam past the reef.”

A small and graceful movement

“With one lithe move, he swept her off her feet and they danced all night long.”

The state of physically trembling due to cold or fear

“As soon as she went outside, her whole body aquivered.”

A sound that is pleasing and musical to the ear

“The sound he made with his guitar was just mellifluous.”

A feeling so great, it can’t be put into words

“After being asked out by my crush I was left in an ineffable mood.”

A deep desire for something to happen

“After 6 months of living in London, Jessica’s hiraeth to go back home only grew.”

Something or someone that is wicked or criminal

“The Evil Queen is one of the most nefarious fairy-tale characters.”

Another word for ‘adequate’

“I don’t know why, it’s such a cromulent song.”

“The Coke was so effervescent, that its bubbles tickled my throat.”

A realisation that everyone around you is living a complex life, just like you

“As he gazed around the park, he was struck by a feeling of sonder.”

The action of throwing someone out of a window

“She was so mad at him for what he had done, all she could think about was defenestration.”

Speech consisting of a persuasive tone

“The way she spoke was pure eloquence.”

“Whenever I pass by that bookstore, I get a strong sense of vellichor.”

“The movie ended with a denouement, which left the audience completely speechless.”

“I love how bright our incandescent Christmas lights make our home.”

Something which only lasts for a very short period of time

“It was the best day of my life, too bad it was only ephemeral.”

A state of being unaware of what is happening around you

“She had no idea what was going on, her mind was completely oblivion.”

“Whenever I rub my eyes, I’m left with phosphenes for a while.”

The emission of light caused by fluorescence and phosphorescence

“The lights of the Northern sky filled the landscape with luminescence.”

Something which has various luminous colours

“Her iridescent bracelet shined brightly under the sunlight.”

Against the law; illegal

“I broke up with my boyfriend because of his illicit drug addiction.”

A loud buzzing or humming noise

“My vacuum cleaner usually makes a lot of bombinate noise.”

A state of feeling romantic attraction for someone

“Limerence is beyond just a simple crush.”

A deep and full voice

“That singer doesn’t even need a microphone, their sonorous voice can fill-up the entire arena.”

A beginning of a time period in someone’s life

“Riley knew an epoch began when he first laid eyes on the woman he wanted to marry.”

Someone who sleepwalks while they are in a deep sleep

“I think my older sister is a somnambulist, last night I heard her just randomly walk around.”

A pleasant and artful appearance of someone or something

“Her aesthetic really suits her.”

The use of black magic

“The evil step-mother used sorcery to trap the princess.”

A commotion or fuss

“Today at work there was a huge hullabaloo between a staff and a client.”

Expressing yourself in an imaginative and beautiful way

“The way he expressed his emotions was almost lyrical.”

“The way she danced, was balletic.”

A sound which sounds closely related to thunder

“My teacher’s yell was thunderous.”

A sound which feels pleasing to the ear

“Listening to her talk is just so euphonious.”

Having mixed feelings about something or someone

“Even though the new house was closer to his job, Andy still felt ambivalence about moving.”

Hide your true feelings and/or beliefs

“He planned to dissemble his intentions to surprise his girlfriend with a birthday party.”

Feeling cheerful and full of energy

“Dancing gives me such a great feeling of ebullience.”

Someone who always looks great in pictures

“She looks perfect in every photo; I wish I was that photogenic.”

something involving physical strength and effort

“The way he worked-out was super vigorous.”

A sound which is sweet and soothing

“The sounds her baby would make were so dulcet.”

Using gestures to emphasise your own words

“Whenever he’s passionate about something, he becomes very gesticulate.”

Walking into a room with a relaxed manner

“While everyone was rushing to get to class, Jordan walked in a very saunter manner.”

“The sunrise this morning was serene.”

Something that is luxurious and expensive looking

“The china in the dining room was absolutely sumptuous.”

Something which vanishes rather quickly

“I swear sometimes my memory is evanescence.”

“The cascade of water was so beautiful to watch.”

Food which is tender, juicy and tasty

“Just the thought of the succulent steak made my mouth water.”

The darkest stage of twilight

“We romantically walked along the beach at dusk.”

“The cake was really saccharine.”

Suitable for the Summer

“I’ve decided to wear something comfortable and summery.”

“My grandmother gifted me this talisman, I promised to always wear it.”

Another word for ‘attractive’

“My goodness! You look fetching today.”

Someone or something which signal when something is going to happen

“Clouds are a harbinger of an approaching storm.”

A strong and sweet-smelling fragrant

“The perfume store is filled with redolent.”

A lack of physical and/or mental energy

“Lassitude is stopping me from getting out of bed.”

A romantic or sexual relationship

“Beverly loves the thought of love so much, she’s continuously getting into one dalliance after another.”

A sound which consists of ringing and/or tinkling

“My son tries his best to hear any tintinnabulation during Christmas time.”

To bring things together to make one product

“We used the DC arc discharge to synthesize carbon nanotubes.” 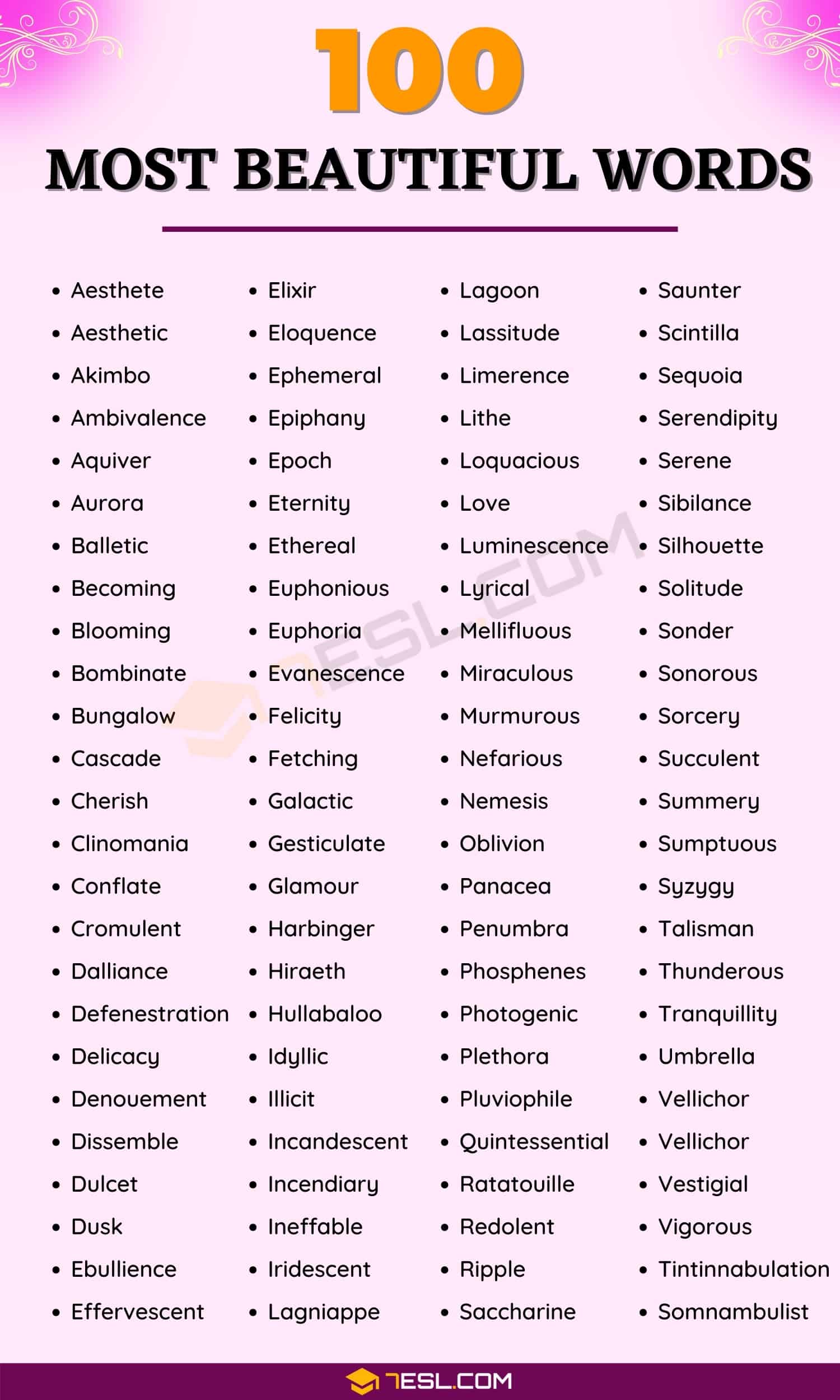