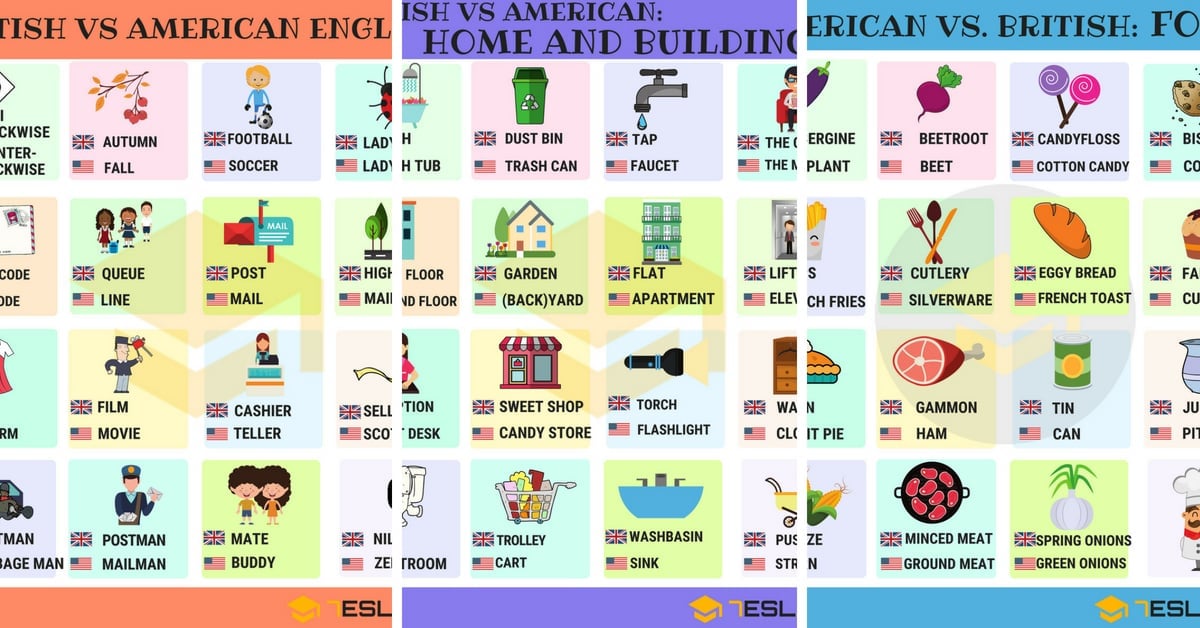 Many people are aware that there are differences between British and American English, but very few could actually tell you what those differences are. This is because most people are only required to be aware of either British English or American English, and know how to use one of them thoroughly. But, what happens if you are part of a community online with members from both America and Britain?

What is British English?

It’s simple enough really, British English is the style of English speaking and writing that has developed in Britain. Just like French, Spanish, or any other language in the world, countries develop their own styles of language in terms of the way they speak and the way they write. It just so happens that American English and British English are largely very similar, but differences arise here and there. This is understandable considering how far apart the countries are, their own style of English was bound to develop in each country over time.

What is American English?

Just like British English, American English is the style of English that is spoken and written in America. The differences aren’t massive, but there are differences that are prominent enough for you to need to be aware of them. This can help with avoiding any misunderstandings or confusion that might arise when a British and American person interacts.

Another key difference between British English and American English is in the grammar that we use. Below we’ll include some examples, but the list isn’t necessarily exhaustive:

Spelling is probably the most immediately obvious difference between British and American English, because you could easily think that somebody had spelt something ‘wrong’ if you came across British English when you are used to American English and vice versa. The following examples will try to give you common spelling differences, but there are surely many more besides:

As well as using different words for punctuation marks (such as in the case of ‘period‘ vs ‘full stop’ and so on) there are actually differences in the placement of punctuation so our writing styles do differ too. Let’s take a look at just some of them:

The above examples are just some of the ways that British and American English differs. Now that you are aware of the differences you should be able to spot where British English has been used in place of American English.

The most notable way in which these differences between the two styles of English arise, is in the words we use for different things. Most of these are quite modern words, where we have each had to develop our own words for the objects in question. Obviously, the two countries didn’t need to communicate what exactly they were going to call something, so words sprang up that mean the same thing, but were just different. Here are some examples: 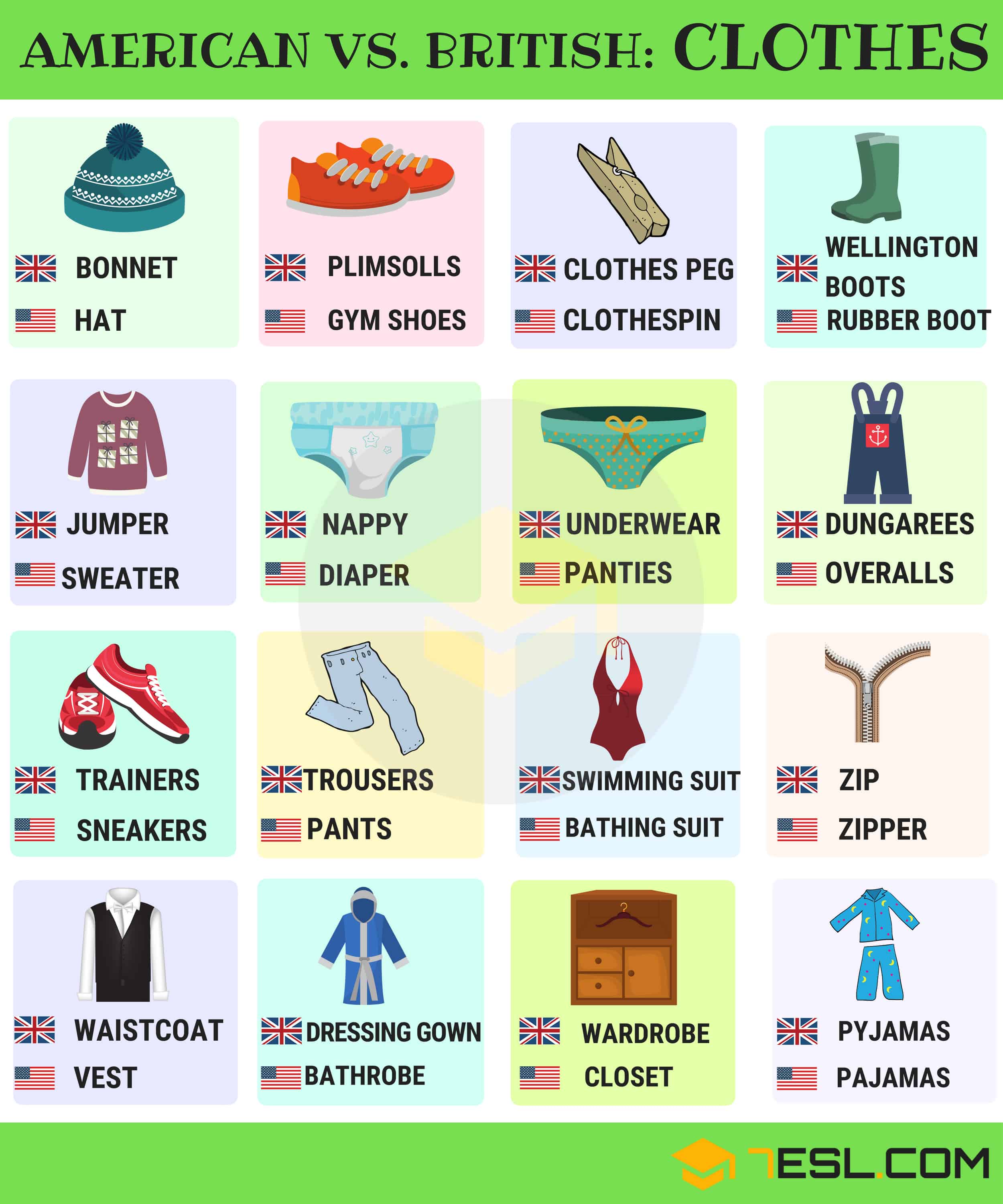 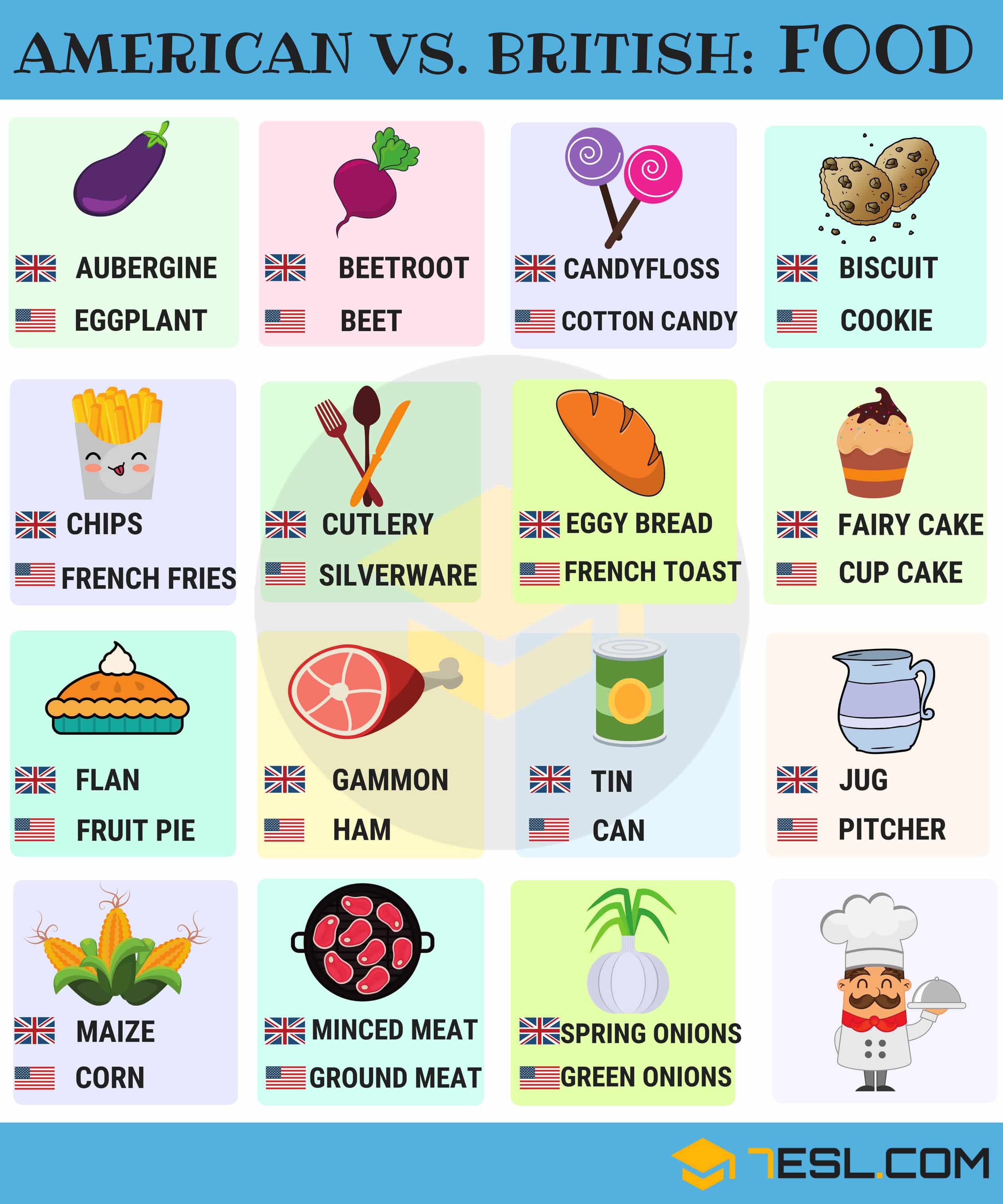 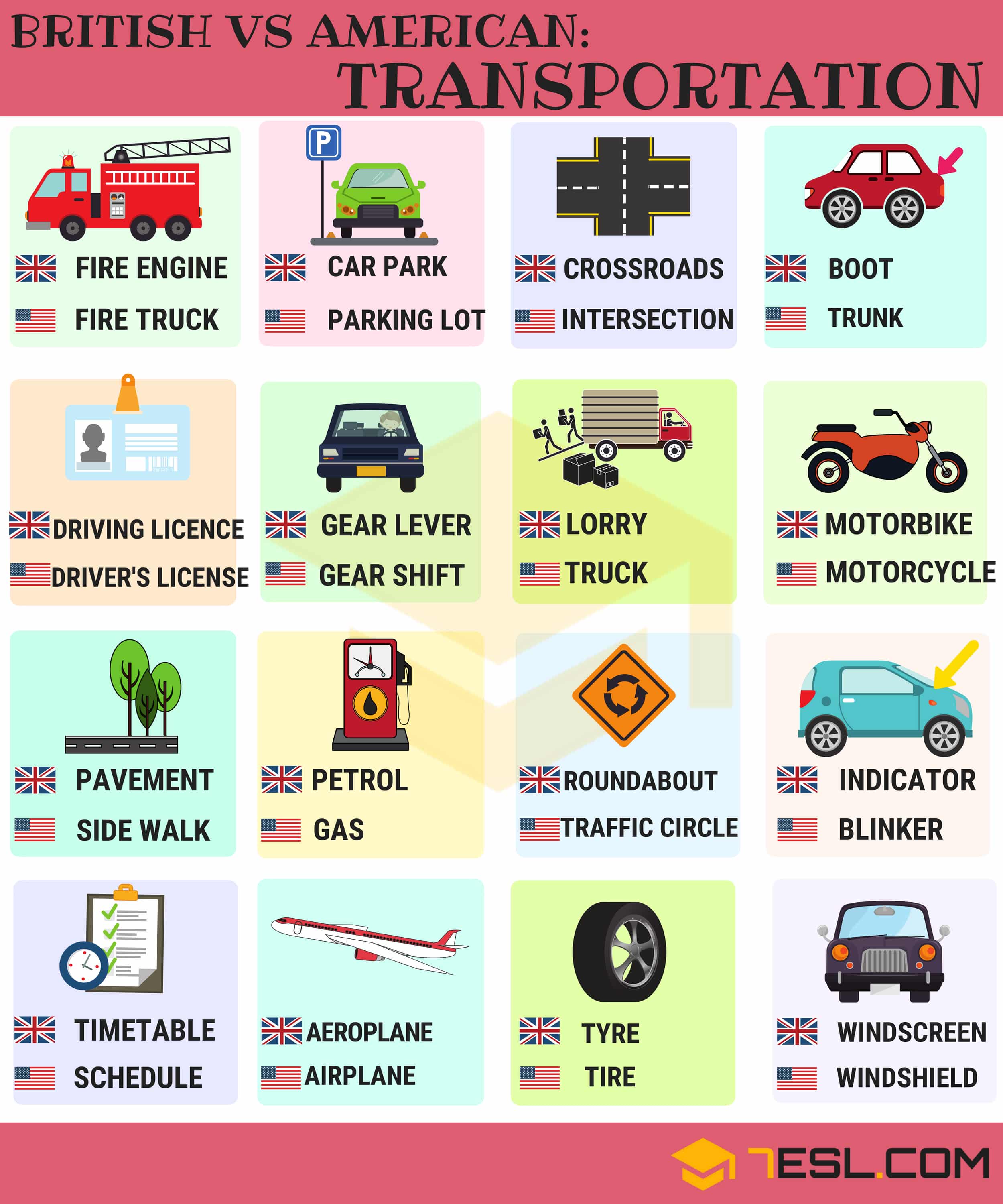 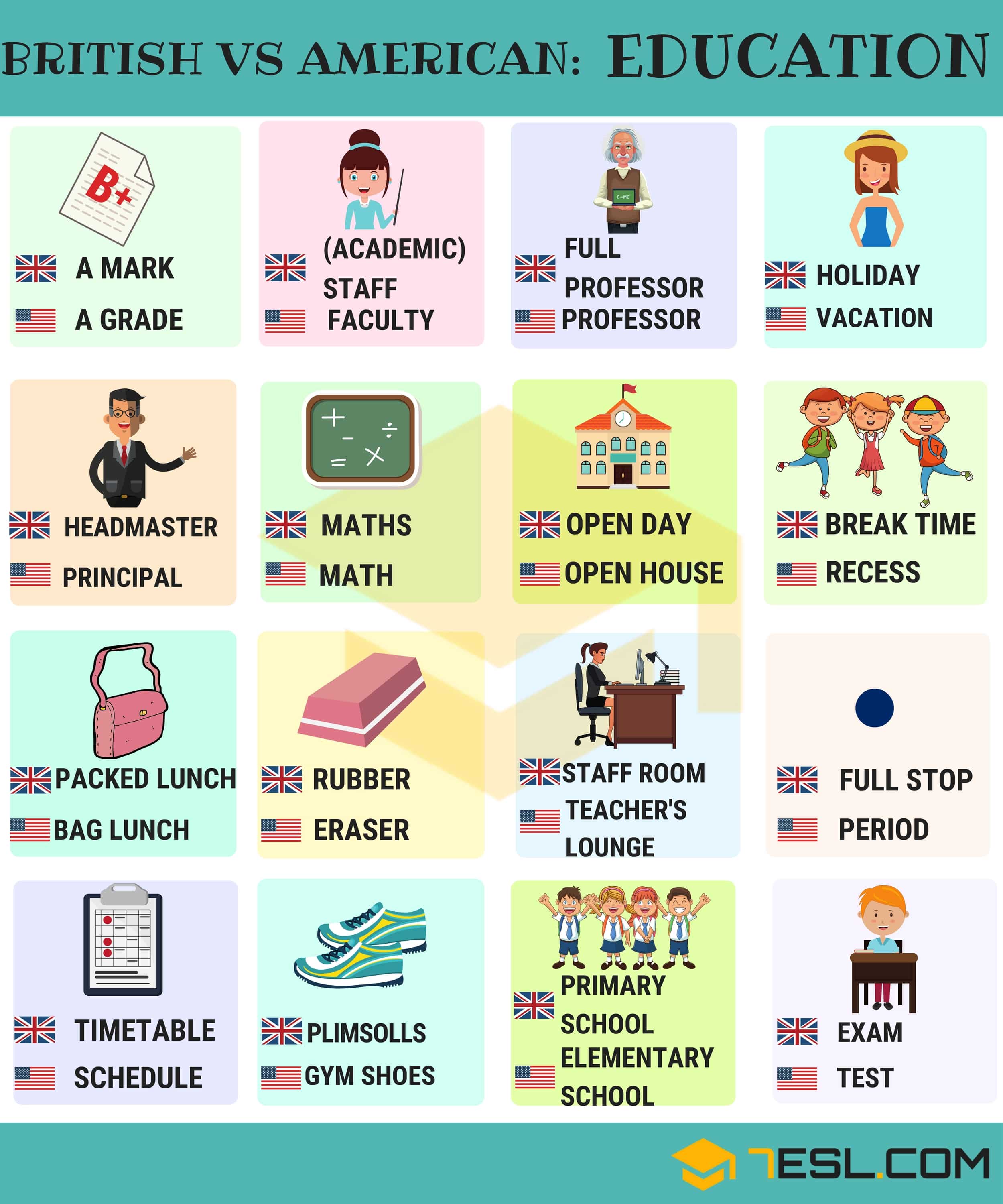 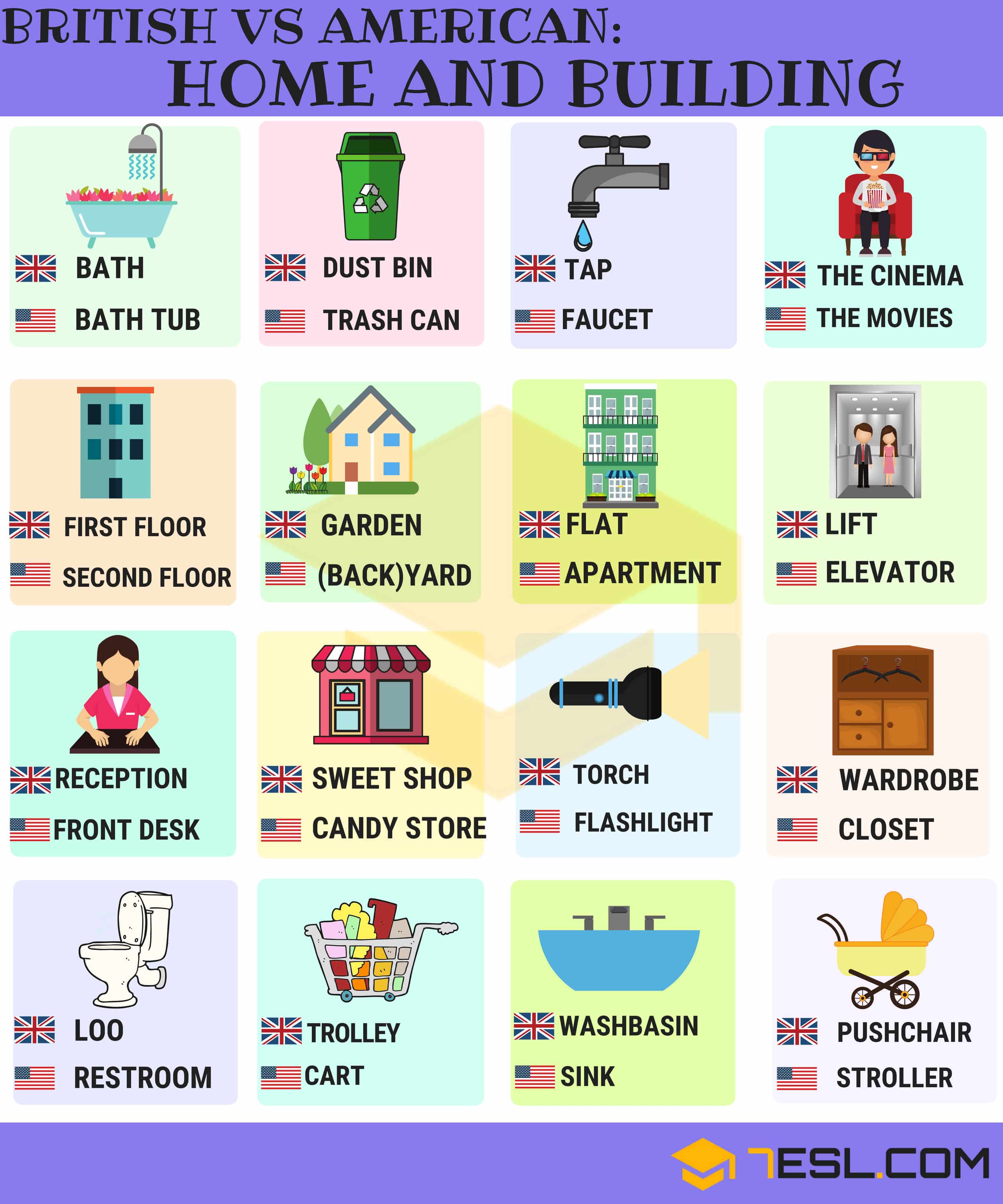 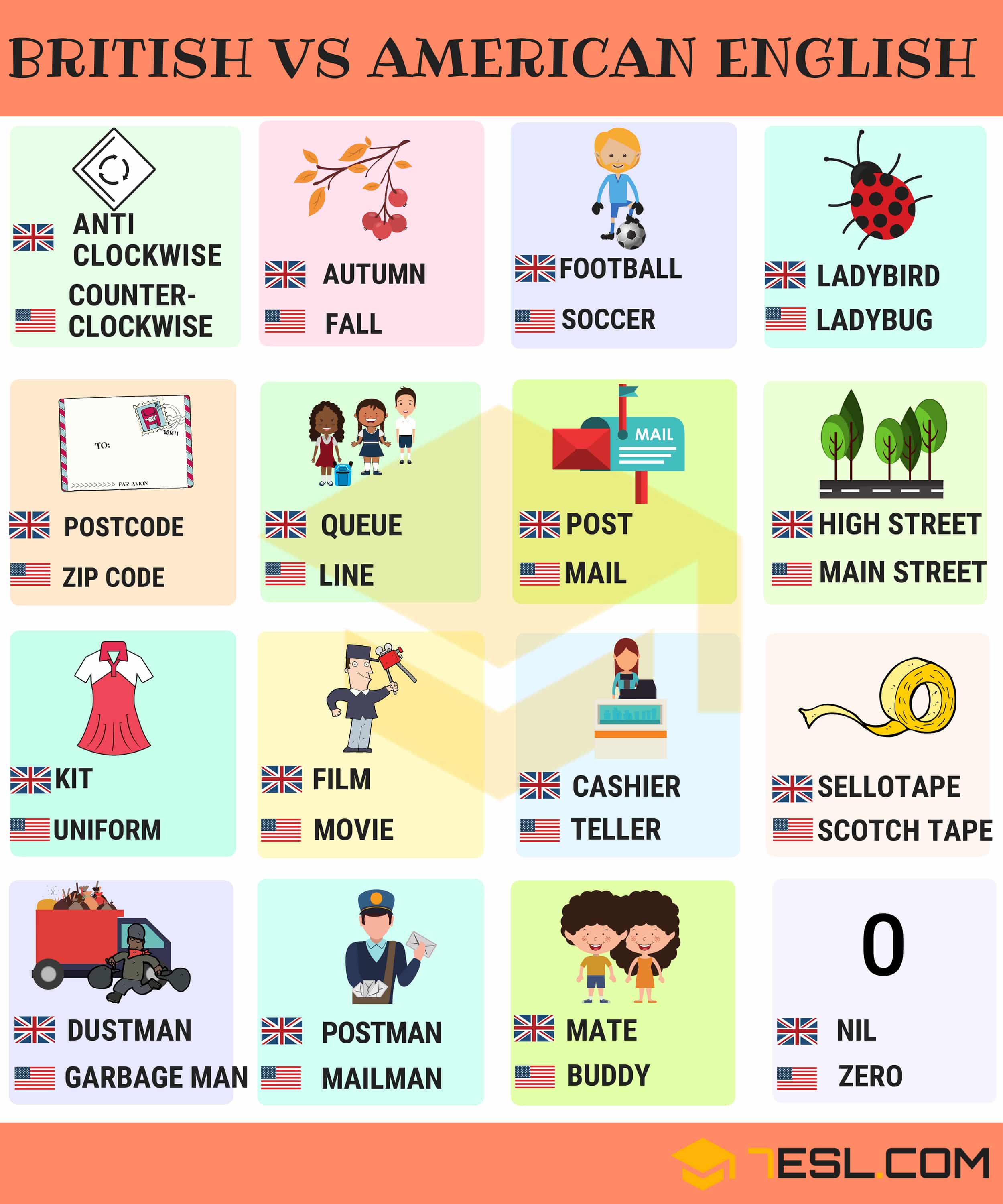 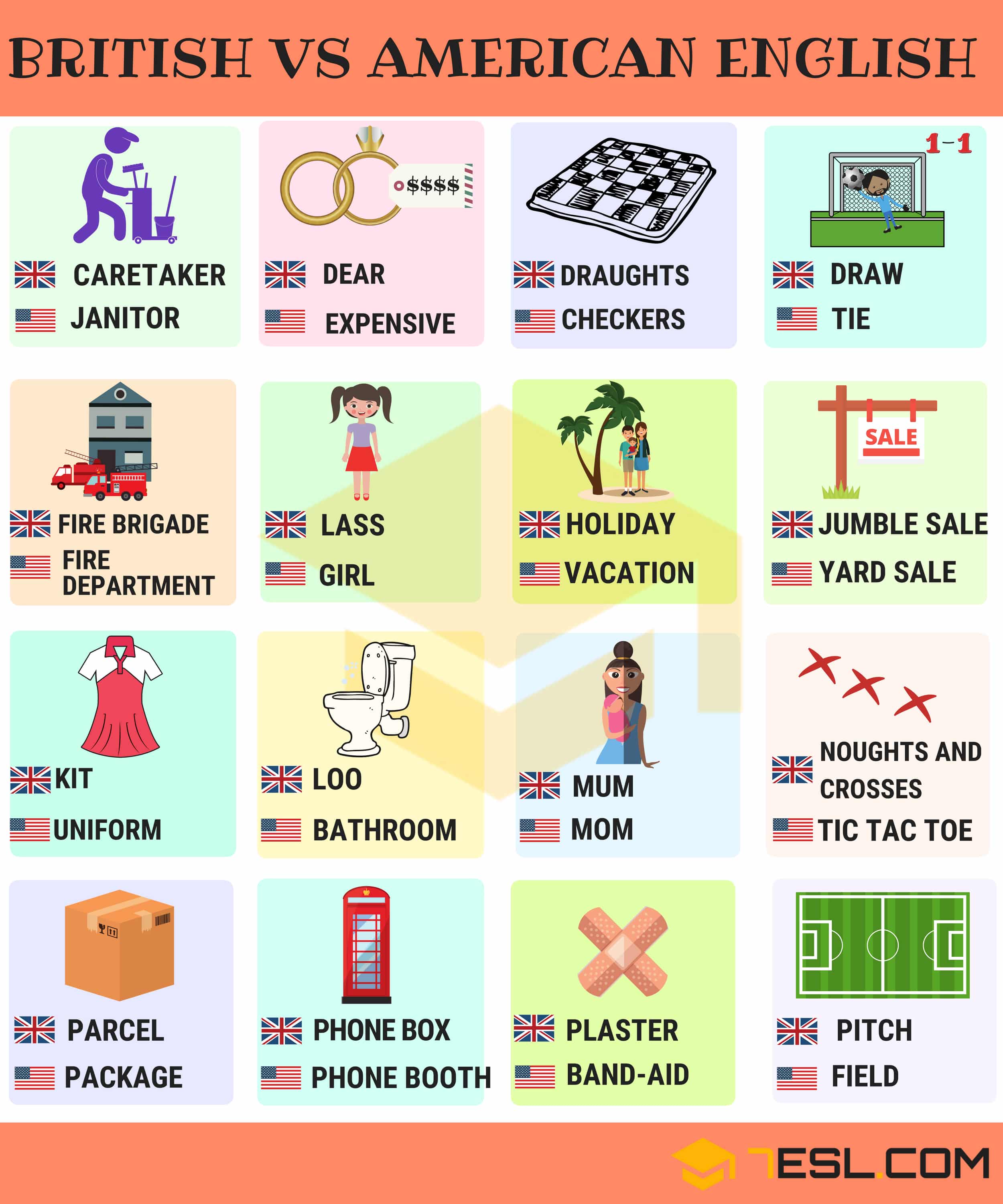 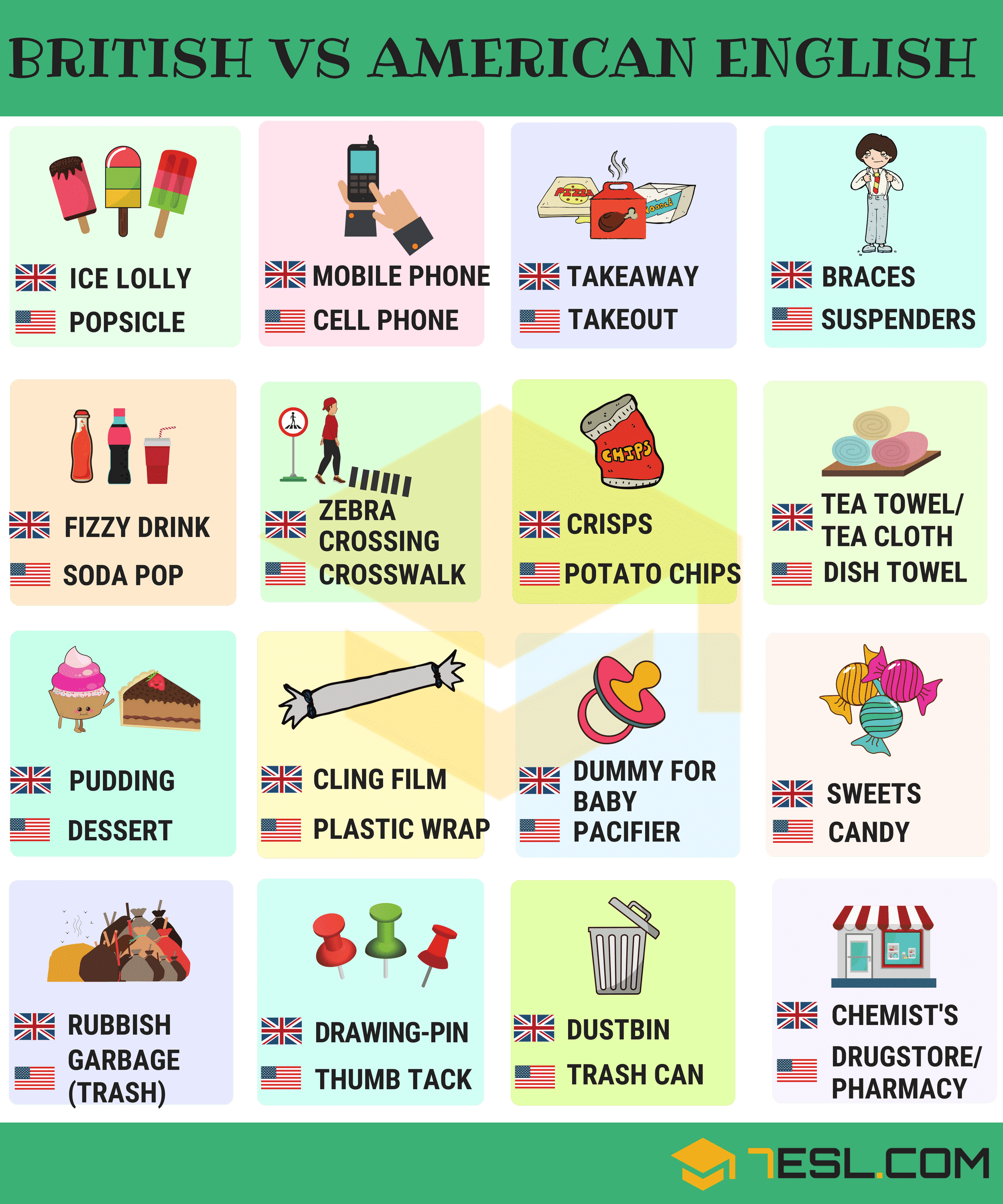 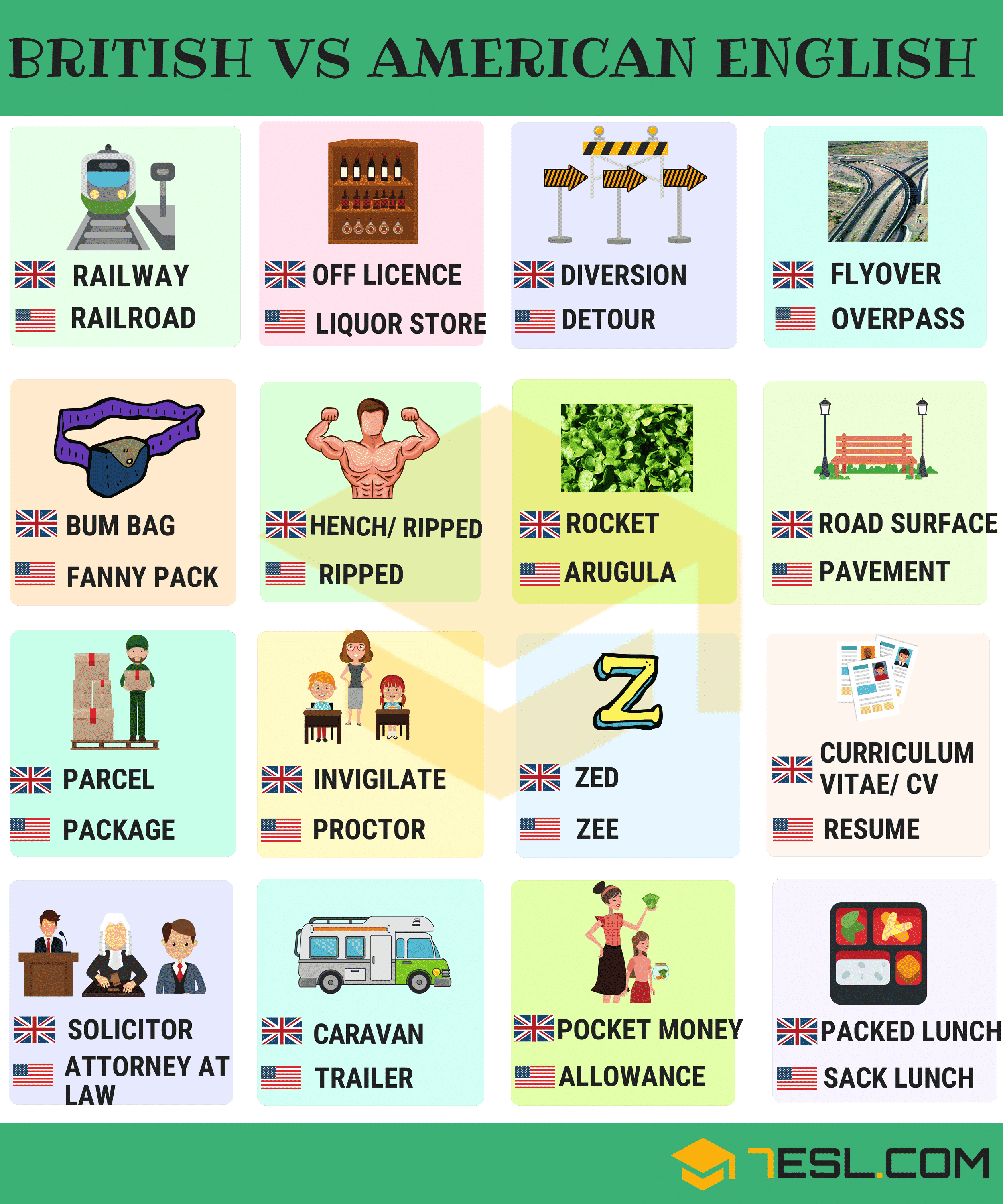 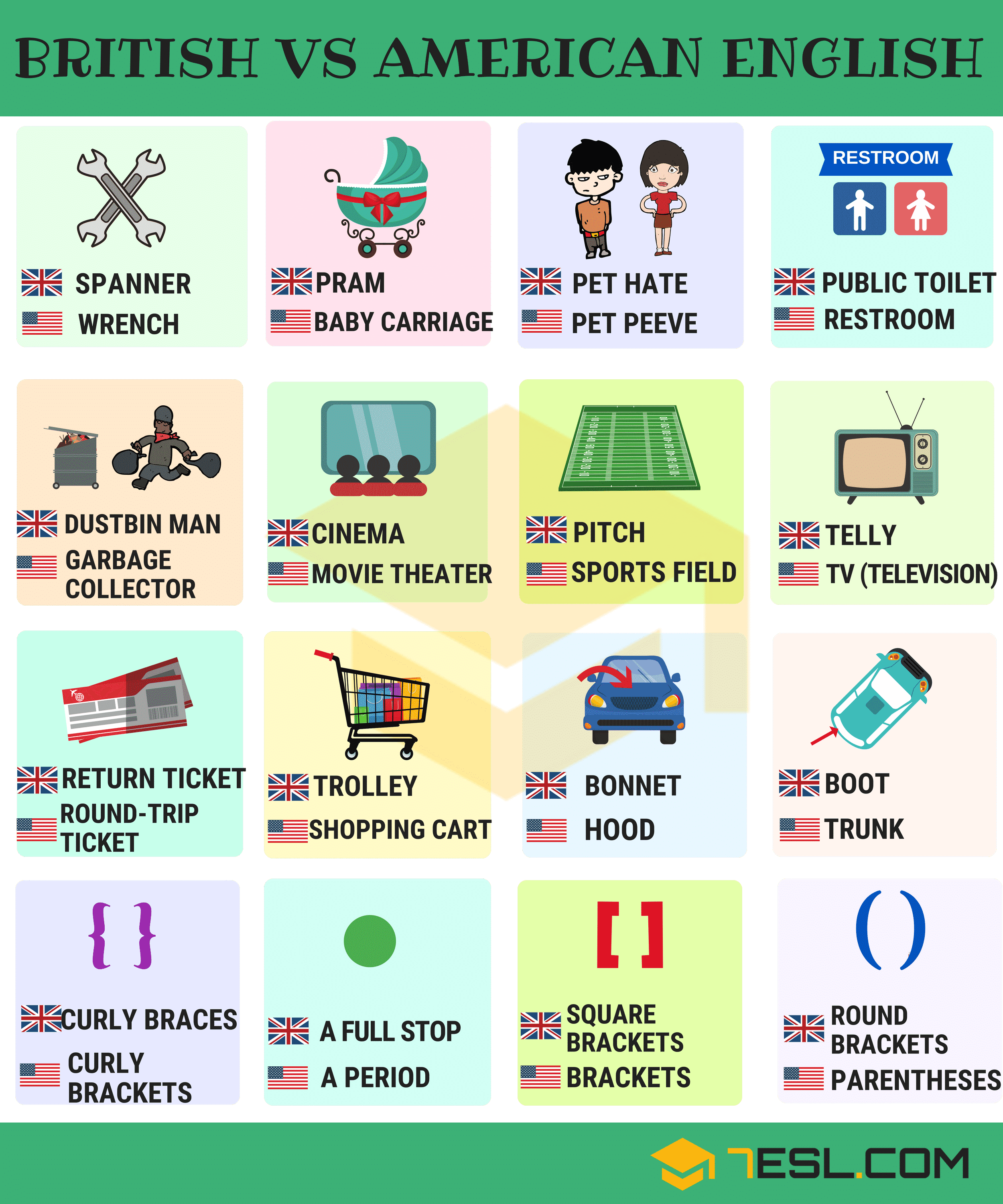 200+ Differences between British and American English with pictures

I love for source of learning.

Some of this is not so black and white as you are presenting it Technically in school Recess is where you get to maybe go outside and kick the soccer ball around or go to the gym and shoot a few hoops. Break is more like you get a chance to use the restroom drink some water and collect your thoughts. Recess is at least 20 minutes Break is 10-15 minutes. Tap and Faucet are both understood in the US Tap is used regionally in some places in others you never hear it In the kitchen pitcher and jug are… Read more »

Few things. A faucet is the device providing water, tap is providing drinkable water(or beer if you’re at the bar). But that said I’ve been all over the US, and while I’ve heard and used tap water I have never seen a kitchen faucet called a tap. Most notable is your statement on pitcher vs jug. A jug is a larger, normally glass, bottle. A pitcher is open topped and designed for pouring. Pitchers are for serving while jugs are designed for storing. Ain’t saying they can’t be used interchangeably, but they are normally not. It is like calling a… Read more »

This article helped me so much with school! Thank you for making this! This also makes Harry Potter a lot easier to read.

Thank you. I really learned many words