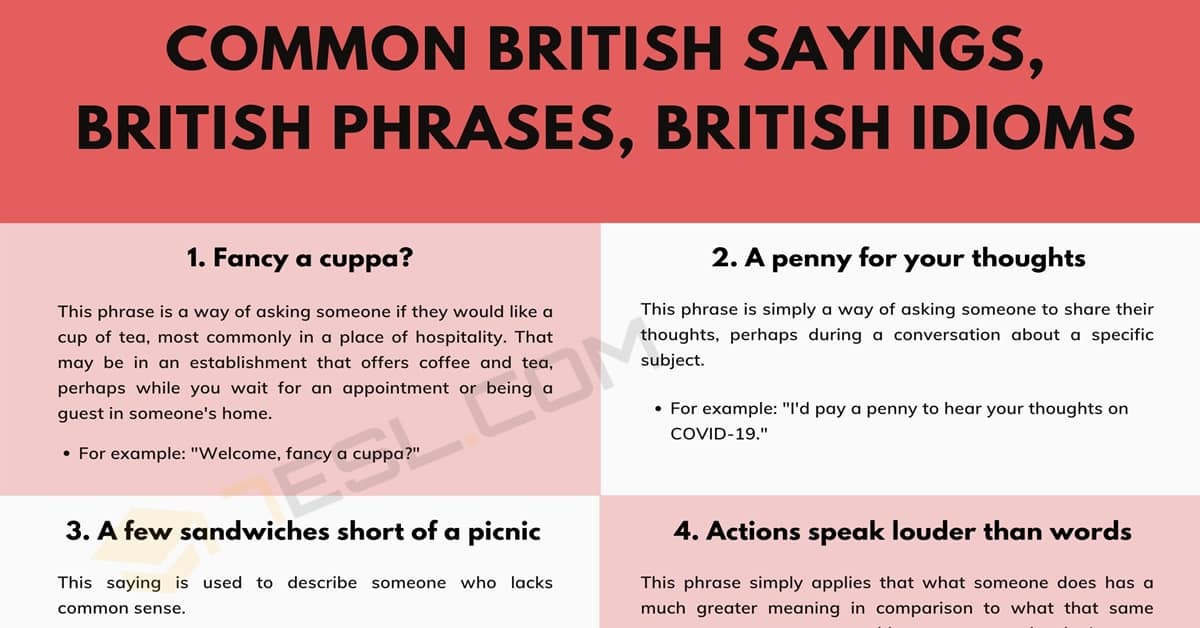 Every country has its own sayings, phrases, and idioms that only those from that specific country seem to understand. Very much like those little inside jokes we make; with the ones we are closest to. These sayings can be quite useful to learn, especially if you plan on traveling to a different place in order to avoid any embarrassing misunderstandings. It can also be interesting to those who take pleasure in learning about different languages and cultures, in order to expand your own knowledge on the subject.

If this is something you’re interested in, then you better stick around because I’m going to share with you some of the most common British sayings you should know as well as examples to explain them further!

This phrase is a way of asking someone if they would like a cup of tea, most commonly in a place of hospitality. That may be in an establishment that offers coffee and tea, perhaps while you wait for an appointment or being a guest in someone’s home.

2. A penny for your thoughts

This phrase is simply a way of asking someone to share their thoughts, perhaps during a conversation about a specific subject.

3. A few sandwiches short of a picnic

This saying is used to describe someone who lacks common sense.

Now, this phrase is widely used around the world, but it’s also a very common British saying. This phrase simply applies that what someone does has a much greater meaning in comparison to what that same person says, you may say this to someone who don’t mean much of what they say.

This saying is another way of greeting someone, meaning “Hello, how are you?”. You’d often use this saying on a friend or family member and even an acquaintance as it may seem a bit informal.

During the 1920s, this saying became extremely popular in the USA. What many people may not know is that it has British origins! This saying is used to describe something as super cool and trendy.

You’ll hear someone use this phrase when they believe something is way too highly-priced.

This saying is another way of saying “I’m tired!”, but not just ‘tired’. Really tired. Perhaps after doing a hard workout or working a whole day.

You would say this phrase to someone who constantly gets up to no good, that may be drinking too much or continuously getting into trouble.

You would say this to someone when it’s their turn to make a decision.

The word ‘cheeky’ in this saying is another word for playful or mischievous, you may hear this phrase often being said in a playful way.

No, cars do not have boots. This British saying is referring to the trunk of the car, replacing ‘trunk’ with ‘boot’.

13. Barking up the wrong tree

This is a negative saying, often used when someone is in the wrong place or with the wrong person.

You know when you’re so happy, you just can’t seem to find the right words to describe the intense feeling. Well, this is the phrase you’re looking for! This is used when you are feeling a great deal of joy.

This common British saying refers to the tail wag of a dog. It’s used when you’re having a conversation with a friend or family member, that consists of a lot of gossips or a much-needed catch-up. It’s called a ‘chinwag’ as the jaw is continuously moving, much like the tail of a happy dog.

16. Beat around the bush

You would use the phrase on someone who is clearly avoiding a specific subject.

17. That was bloody amazing!

The word ‘bloody’ is a very common replacement for the word ‘very’ and it can be used for both positive and negative things.

18. Biting more than you can chew

We all know that one person that does way too much, this British saying describes them perfectly.

Sliced bread has been around 1928, this saying describes an idea or plans to be great!

Cats are known to be very curious animals; this phrase refers that someone has the same instinct and it will eventually get them in trouble.