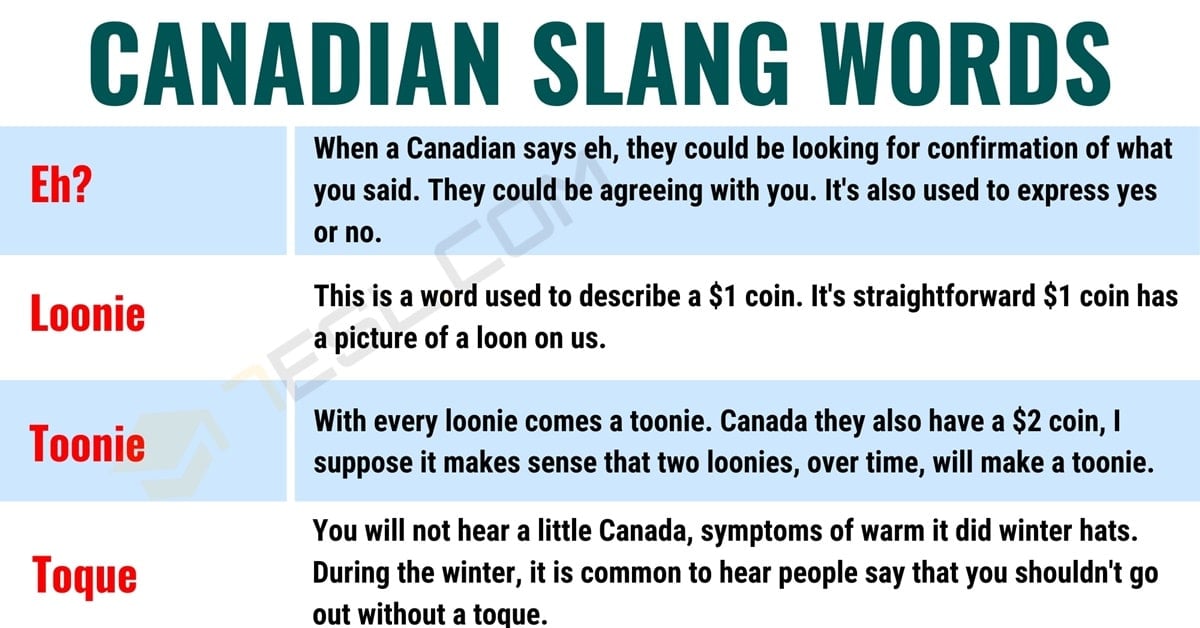 Canadian slang words in English! While Canada is home to two official languages (French and English), the country also boasts a third, lesser known language. To the uninitiated, Canadian slang is truly a world unto itself. That’s why we’re sharing our cheat sheet of slang words to help you fit in in the Great White North. Maybe you know a Canadian and you’re hoping to communicate with him/her a bit more authentically. Or maybe you’re in the mood to head down to the local bar for for some good old fashioned cultural immersion. Either way, we’ll give you the head start you need to think and sound like a real Canuck.

What Is A Canadian Slang Term?

Regardless of the length of time you spend in the classroom; this will do little to prepare you for the shock of holding a full-fledged conversation with a native speaker, especially if you don’t familiarise yourself nuances of how locals speak. Slang is an aspect of the language that is rarely taught in the classroom, but you can rest assured that you will encounter it in the real world.

One of the most exciting things which can also be frustrating for EFL/ESL learners is that Canadian slang is continually evolving. Widespread slang changes to reflect the attitudes and values of the local culture, sometimes the meaning of a slang word can even morph into something different. In many circumstances, commonly used words in English can mean something completely different depending on the context and the person who is using the language. For example, the word HOT, which usually indicates an increase in temperature or a feeling of extreme warmth. But in slang, it means merely attractive. In consideration of how difficult slang can be to understand and learn, we have compiled a list of a few of the most regularly used s Canadian slang words.

Learning Canadian slang is essential for so many reasons, it helps with cultural immersion, prevent unhelpful misunderstandings, makes listening to local music less confusing, it enables you to be more creative and even meet someone new.

We know that this is by no means the definitive guide to Canadian slang. I hope it will prevent some confusion or faux pas when you get the opportunity to visit this beautiful country. Remember that while understanding slang is essential, to be able to able to communicate with the locals honestly, you should still focus on giving yourself the most solid foundation first.

Learn more with a useful list of British slang words with meaning and examples.

It is one of the most commonly heard slang words in Canada; it is unique to their culture. Canadians use it for a variety of reasons. But there are three widespread occurrences. When a Canadian says eh, they could be looking for confirmation of what you said. They could be agreeing with you. It’s also used to express yes or no. It would be inaccurate to believe that Canadians use the word eh after every sentence.

For example, you won’t hear them say, “good morning, eh?

The vast majority of times, Eh, it’s only hard at the end of a sentence if they’re looking for you to agree with them.

Here are some examples.

This is a word used to describe a $1 coin. It’s straightforward $1 coin has a picture of a loon on us. This is a common aquatic bird in Canada that has like a duck. The overtime people have begun to refer to the one-dollar coin is a loonie.

With every loonie comes a toonie. Canada they also have a $2 coin, I suppose it makes sense that two loonies, over time, will make a toonie. Even though it’s got a polar bear on it instead of a bird.

Another piece of Canadian slang, but you will not hear a little Canada, symptoms of warm it did winter hats.

During the winter, it is common to hear people say that you shouldn’t go out without a toque.

If you hear someone tell you to take a seat on the Chesterfield, just telling you to sit on the couch or sofa.

Tim Hortons is a trendy Canadian chain of coffee shops, its popularity late to them now being affectionately nicknamed Timmies. Like Starbucks in America, that is Tim Hortons everywhere. It’s ridiculous sometimes you’ll find them directly across the street from each other.

This Canadian slang term will commonly be heard in Timmy’s across Canada. It merely means a mug of coffee with Two Sugars and two creams.

In Britain, they call it the fizzy drink; in America, it is referred to as a soda. In Canada, a POP is a carbonated beverage, such as a Coca-Cola or a Sprite.

In Canada, the locals use the word Mickey to describe a 375ml bottle of alcohol. If you’re driving to a house party and someone asks you to stop at the store because I need to buy a Mickey of vodka. now you know what they mean.’

Another popular Canadian slang term for a bottle of alcohol, because they come in 26 ounces are 750 ml bottles.

This Canadian slang term is not exclusive to Canadians; you will hear us there quite a loss. It’s used to describe someone or something obnoxious. So you might overhear someone representing one of their friend’s dresses, “it is a little extra.”

Also, a term does not excuse ITS Canada; it’s used to describe someone who’s charming art describes something that was done very well.

This is more common in rural areas of Canada, but it’s used to describe giving 100% to something. Are some people work very, very hard.

All ready to finish painting the house I’m going to give’ r. It isn’t unusual to hear it used here to use when referring to alcohol consumption. it also means to party a little hard Its Bob’s birthday, we are going to give’ r

No, it’s not homosexual milk, and yes, the phrase is used ubiquitously in grocery stores throughout Canada. Not to be confused with whole milk, this is what Americans call homogenized milk.

Locals substitute this word for “OK.” Rather than denoting the truth of a statement, it merely acts as a term of acknowledgement.

Deriving chiefly from British Columbia, this means exceptional or awesome. Don’t be offended if a local says that you’re looking “skookum” in your dress – it’s a compliment.

Hang a Larry; Hang a Roger

Let’s imagine a scenario in which you’re driving a car somewhere in Vancouver. A Canadian named Mike is sitting in the passenger seat, and he unexpectedly tells you to “hang a larry”. Are you visiting a friend named Larry? Nope. Mike is just telling you (in his own charming way) to turn left. Similarly, to “hang a roger” means to take a right turn.

This seems self-explanatory. In fact, it’s what Americans call a candy bar. However, Canadians say “chocolate bar” in reference to all bars that have any amount of chocolate in them. The next time you walk into a convenience store, try asking for a chocolate bar with a little bit of homo milk. You’ll blend right in with the locals in no time!

Canadians refer to a multi-level parking structure as a “parkade”, while Americans mostly call it a parking garage.

This is a fun one. A “bunnyhug” is a Saskatchewan-based term for a hooded sweatshirt with a front pocket but no zipper. Theories abound as to where exactly the term came from and why it’s used (almost exclusively) in Saskatchewan. It’s believed there was a bunny overpopulation in the area about a century ago, and residents turned bunny pelts into wraps that loosely resemble today’s version of the sweatshirts.

Another theory: back in the 1600s, muffs were lined with bunny or rabbit fur, with each end left open to allow the hands to be tucked in at the front of the waist. And of course, we’d be remiss not to mention the “Bunny Hug”: a scandalous (for the time, anyway), grinding, hip-holding dance from the 20th century that was popularized in the Barbary Coast dance halls.

Got a light for my dart? Confused? Don’t be. A “dart” is just Canadian slang for “cigarette”.

You don’t have to be in an actual canoe for this saying to apply to you. Canadians use the phrase “tippy canoe” to refer to just about everything.

You know that feeling of eating too much turkey on Thanksgiving Day? Now you have the perfect (Canadian) word to describe it. “Sophonsified” is the opposite of hungry, meaning sufficiently full and satisfied.

Is this Jesus’ Irish disciple? The name of a local Canadian bar where you can buy car bomb shots? Neither. Canadians largely use “Jesus Murphy” in the same context as “God damnit”. The exclamation can be used to convey frustration, fear or annoyance.

This abbreviation of the word “depanneur” is the Quebec version of an NYC bodega or 7-11. The word comes from the French “la panne”, meaning breakdown. A repairman is called a “depanneur”, so the linguistic thinking here is that a corner store can fix just about any problem you might have. Need some darts? Food? Booze? Just head to your local dep to get your fix.

PSA – they’re not popsicles. Popsicles come on a stick, while these icy treats come in tiny plastic tubes that seem like they should be a hazard for children, but … what do we know.

Every country has a sport they go crazy for – and for Canadians, it’s hockey. So it’s natural that the Canucks have their own slang for fans of the sport. A rink rat is someone who spends the majority of their time at a hockey rink – regardless of whether they actually play hockey. Similarly, a puck bunny is a girl who does the same.

While we’re on a hockey vein, we may as well bring up “habs”, a term used to refer to the Montreal hockey club. “Habs” is an abbreviation of the French “les habitant”, and also describes the inhabitants of present day Quebec.

No shame here – we’ve all biffed before. The word means to fall down, to slip or eat sh*t.

This Canadian slang is the equivalent of encouraging someone to “go for it”, “help yourself” or “enjoy yourself”.

This one might be familiar for any viewers of Trailer Park Boys. The Canadian mockumentary TV series focuses on the misadventures of a group of trailer park residents, one of whom – Ricky – coined the phrase “Worst Case Ontario”, meaning worst-case scenario.

This spacial reference is used to describe the location of a building that is diagonally across from another reference point. For instance – you can buy your homo milk at the dep kitty-corner to your house. 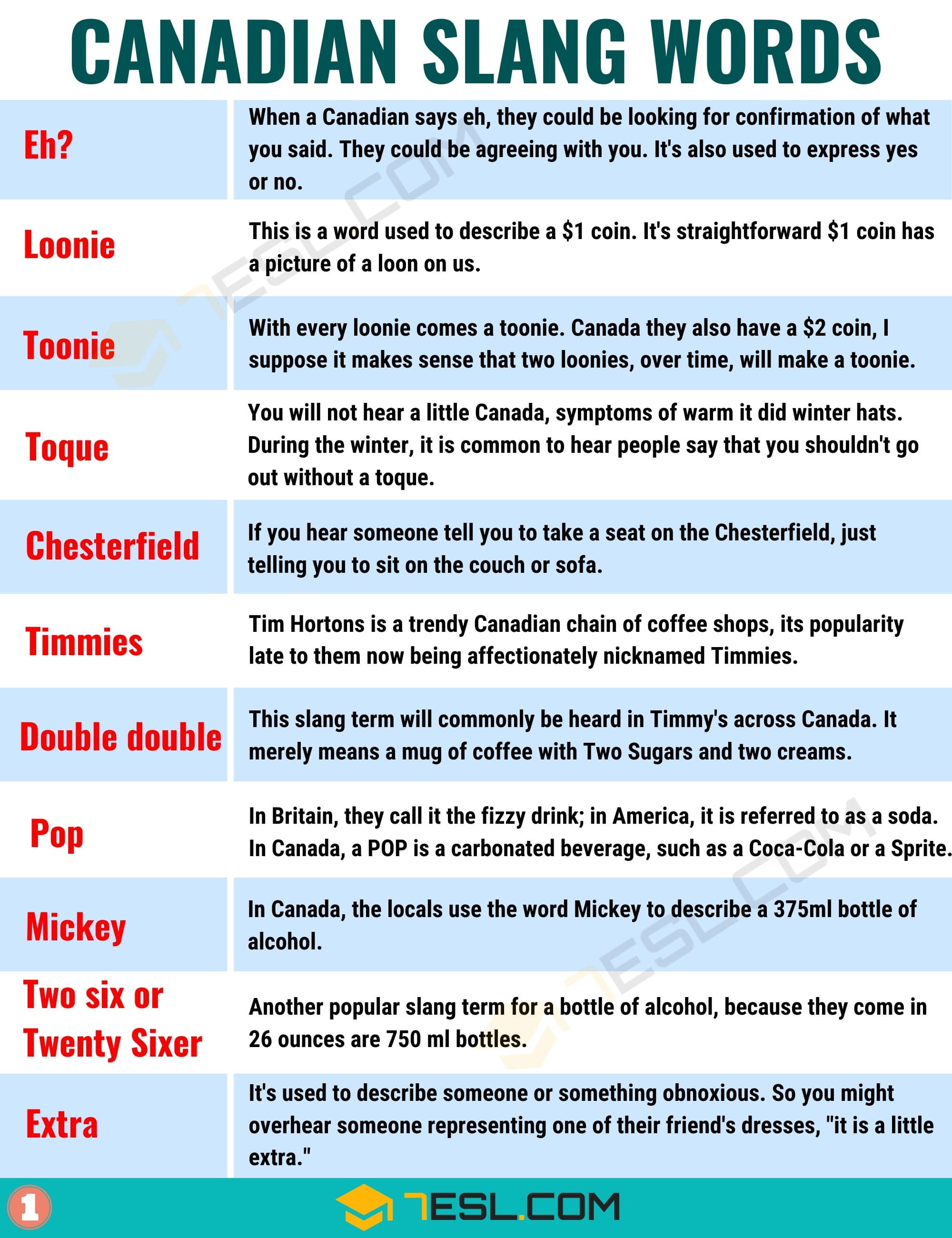 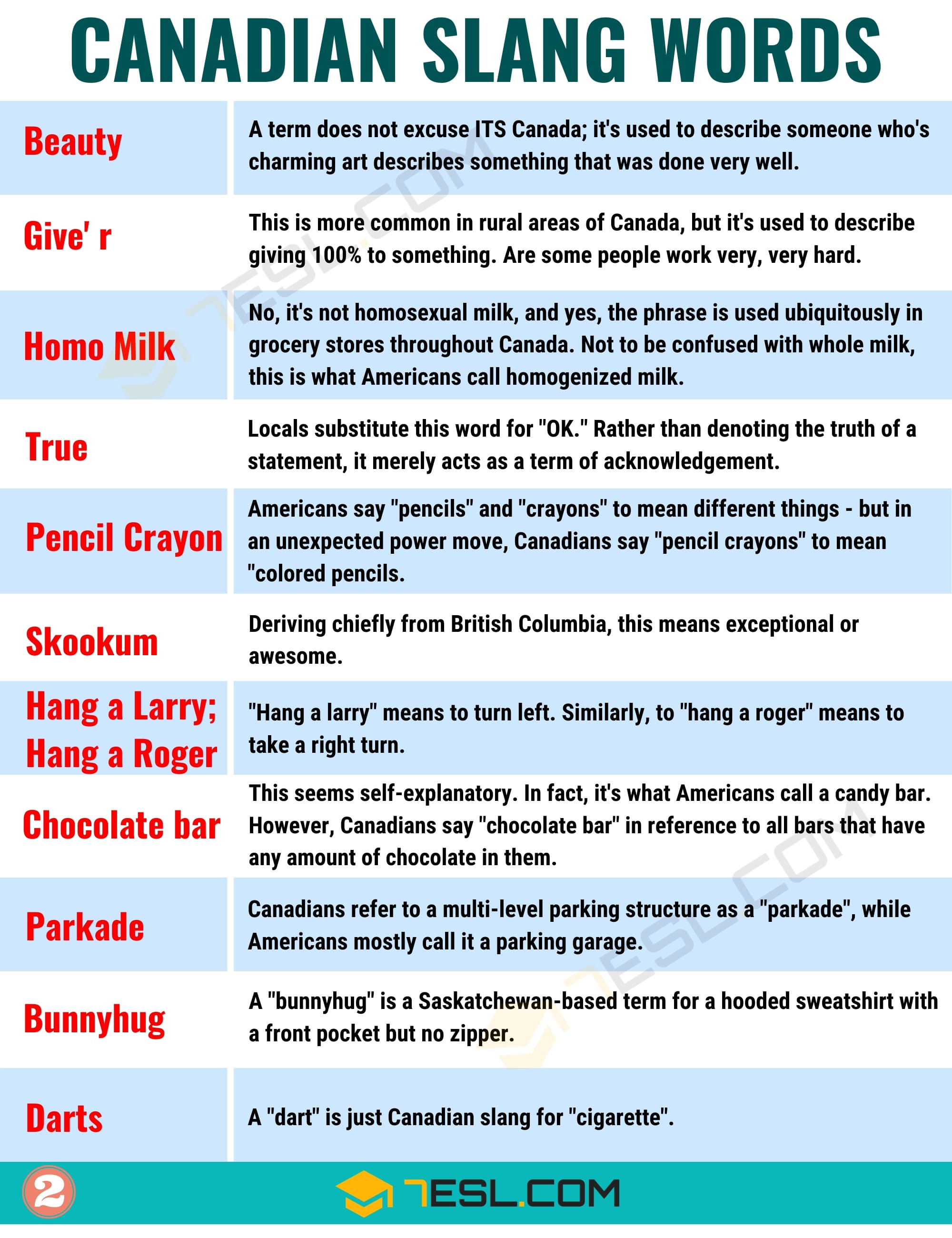 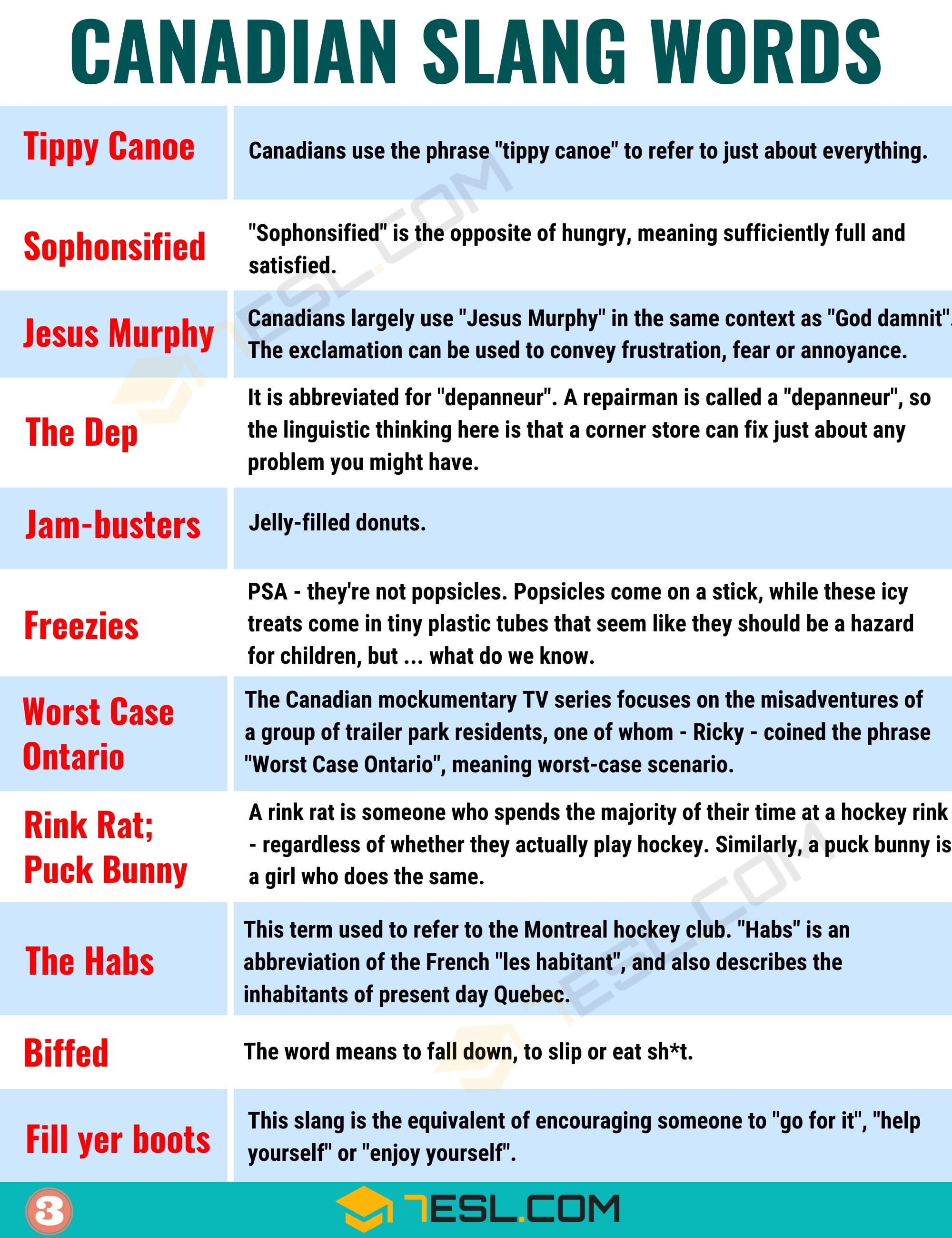