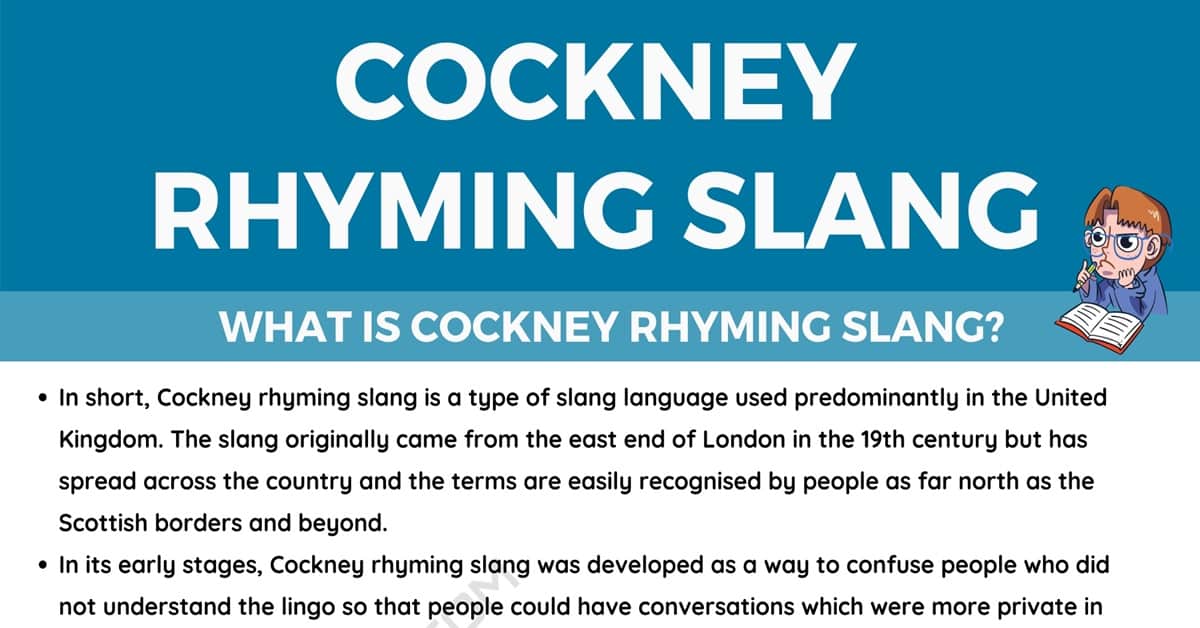 You may have heard of Cockney rhyming slang, as it is something that is very popular in the United Kingdom, especially around the capital city of London. In this article, we are going to look at what exactly Cockney rhyming slang is and how it is used as well as looking at some examples of this and what they mean.

What Is Cockney Rhyming Slang?

In short, Cockney rhyming slang is a type of slang language used predominantly in the United Kingdom. The slang originally came from the east end of London in the 19th century but has spread across the country and the terms are easily recognised by people as far north as the Scottish borders and beyond.

The word Cockney is a descriptive word to describe someone from a particular area of London. In truth, to qualify as a true Cockney one has to be born within the sound of the bow bells from a church called St Mary Le Bow in Cheapside, however, the term is more broadly applied and refers to people from the London area with the traditional Cockney accent-if you are unfamiliar with this, think of Dick Van Dyke in Mary Poppins-that’s a Cockney accent!

In its early stages, Cockney rhyming slang was developed as a way to confuse people who did not understand the lingo so that people could have conversations which were more private in their nature. Much of the slang was developed by street traders such as market sellers and those selling fresh produce from carts. However, in the modern-day, it is simply used as a more fun alternative to traditional English words and phrases.

One of the most notable ways in which this form of slang spread across the country was through television series such as Porridge and Only Fools And Horses which heavily featured the use of rhyming slang and due to their popularity caused many people outside of London to join in with the trend.

Many people might think that this type of slang is outdated and not used anymore, but this couldn’t be further from the truth. The slang is continuously adapting and is used more often than people realise.

There are a huge amount of words and phrases used within Cockney rhyming slang with new ones being invented all the time, so this is a constantly changing form of slang. It has also been seen that Cockney rhyming slang might be going further afield and being used in countries other than just the UK.

How Does It Work?

Rhyming slang is exactly what you might expect it to be, it is a form of slang which uses words and phrases which rhyme with their original meanings, for example ‘apples and pears’ refers to stairs as this phrase is a direct rhyme of the word. In many instances, the word which rhymes is left out, a good example of this is the term ‘butchers hook’ which means to look but many people would simply say that they were ‘having a butcher.’ These terms may seem complicated but they are commonly recognised by many people and easy to understand once you learn them.

There are many examples of Cockney rhyming slang being used as a humorous reference to a word, an excellent example of this is the term ‘trouble and strife’ which means wife or the rhyming slang ‘fat boy slim’ which means gym. You can see the irony in these phrases and why they would be used to add humour.

It is important to note that Cockney rhyming slang is used in informal situations.

Now that we have a good understanding of what Cockney rhyming slang is and how it is used, we are going to look at some examples of it in order to get a feel for how the slang sounds and the different phrases you can expect to hear.

Cockney rhyming slang is a diverse form of slang which originally came from the capital of England, London but has since spread across the country and is widely used. This type of slang is often used in day to day informal conversation and uses words which rhyme with the words to which they are referring. In some cases, the rhyming word is left out making it a little more difficult to determine the meaning of the slang but by learning these common examples of Cockney rhyming slang, you will much more easily be able to understand what is being said.