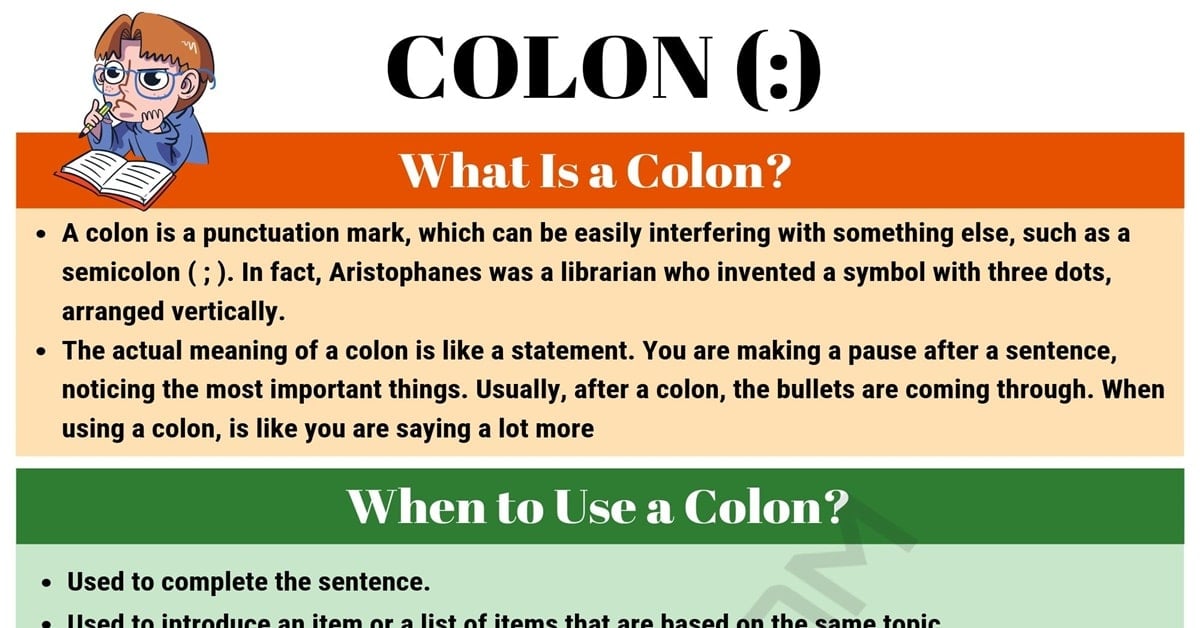 Most of the time, the Colon (:) symbol is misunderstood, due to every culture and the way it is used for those cultures. Usually, Latin relatives languages (Eastern Europe) are using the colon with different purposes than Americans. Because the colon came from Latin writers, this punctuation mark kept its pure meanings for Latin countries. It can happen that Latins will use the colon symbol too much, in order to make their writing much easier to write and read. It is said that this symbol was specially invented for lazy artists, in order to put everything on the list and write as simply as possible.

Whatever the colon symbol started from somewhere (as any other thing) and then expanded to the whole world. That’s why some of the rules may apply to all cultures.

What Is a Colon?

A colon is a punctuation mark, which can be easily interfering with something else, such as a semicolon (;). In fact, Aristophanes was a librarian who invented a symbol with three dots, arranged vertically. Each dot had its meaning, such as:

The actual meaning of a colon symbol is like a statement. You are making a pause after a sentence, noticing the most important things. Usually, after a colon, the bullets are coming through. When using a colon, is like you are saying a lot more, such as ‘ here’s what I mean ‘, ‘ that is what to say ‘.

Learn more about the difference between a colon and a semicolon.

American vs. British English Use of a Colon

There is only one difference. The choice to capitalize after a colon in American English isn’t common at all in British English, regardless of whether the following clause is independent or dependent.

Key Points to Remember When Using a Colon

You can use a colon before an explanation (or an independent clause), a list, or a quote. You should always set up the first part of the sentence before the colon to clarify that the emphasis is on the next part of the sentence following the colon. In American English you should only use a capital letter on the next word if it is an independent clause (and only if you want to), we should never use a capital letter if the following clause is dependent or part of a list, however.

When to Use a Colon

When writing, using colons can be a bit of a difficult thing. Sometimes people attempt to use them but do so in a manner that isn’t strictly grammatically correct. So, this guide will hopefully teach you how to avoid some common mistakes, what exactly colons are and how they work, and provide you with a little quiz at the end to test your new knowledge.

When to Use a Colon with 13 Colon Punctuation Rules

Because there are many punctuation marks that are used in a sentence, is good to know when is the right time to put the colon symbol.

(1) Use the colon mark when the sentence is completed. Usually, people are making this mistake because they think the colon will continue the previous sentence. This also depends on the writing style (if you are writing in Chicago style or AP style).

(2) You can use a colon to introduce an item or a list of items that are based on the same topic.

E.g. I’m going on a camping trip so I will need: sleeping bags, a tent, a fan.

(3) You can use a colon as a replacement for the exclamation mark, and so you are giving your point of view. It also used when writing scripts for a play, because it gives a specific tone to the speaker (it depends on the context).

E.g. You need one thing to lose weight: a good diet.

(4) You can use a colon when you don’t want to excessively use semicolons. This way, the colon will separate two sentences so you will not make a hardly understandable sentence.

E.g. He really made it the way he wanted: he built the dream house for his family. This is only allowed when using the AP style.

(5) When you are writing in the Chicago style, be sure that after the colon, your first letter is in upper case.

(6) You use the colon so as the words seem more spread out across the page.

(7) You can use a colon after a short introduction, like a headline, so you are making the reader follow the next steps you were writing.

(8) If you want your page to look good, is better to let a space between the sentence and the things that are coming after the colon. As you are starting a new phrase. Many people are wondering how much space should they let after placing the colon, and the answer is ‘ just like after using a comma ‘. And that is mostly when you write the paper on PC, because you can press the SPACE button once and that’s it. Manually is much harder to follow this rule properly.

(9) It’s better to use the colon in business letters, rather than a comma (as it is used). In the end, when you are sending the best regards (or what else), use the colon to separate your name from the salutation.

(10) You can use the colon even in a non-sentence way.

(11) The colon symbol is used when you need to separate the volume and the page from a book. Is mostly used when writing the bibliography in Chicago style.

(12) You can use a colon when separating a question-answer interview.

E.g. Q: When do you want to leave the country?, A: As soon as possible.

(13) The colon symbol is also used in bible verses.

When Not to Use a Colon

(1) Do not use a colon symbol when the list is directly following a verb or preposition. That’s why is better to use bullet points so you won’t be afraid of using them.

(2) Do not use a colon when you are using a gerund verb. E.g. I bought many things including milk, oatmeals, bread.

How to Use the Colon with Quotation Marks

When you want to quote someone and using quotation marks, a colon is welcomed in the sentences instead of a comma symbol. This style is mostly used by writers and editors and it looks good on a paper.

E.g. writing dialogues between two characters in a play.

Take care when using this punctuation mark, in order to get the best result. As you can see, it has many purposes. But if you are also using a grammar app to check your papers and so on, it will tell you to use the colon only when you are creating a list. Otherwise, it will not let you use the punctuation mark for its purposes.

Common Colon Mistakes and How to Avoid Them

A colon is most often used to show that a quote, important explanation, or list is about to follow. What’s important is knowing where to place it in the sentence. Many people do so incorrectly because they do not set up the first part of the sentence to show that what comes after the colon is important to the overall sentence. Here are some common examples and how to correct them:

Incorrect       I love my girlfriend for: her smile and her laughter.

Correct       I love my girlfriend for two reasons: her smile and her laughter.

Now you have created the emphasis to highlight how important the explanation is.

Here, you are offering a list as the next part of the sentence following the colon. The problem here is, you haven’t set up the list correctly for a colon to be necessary. You should only ever use a colon when it’s clear that the following part of the sentence is a logical explanation, an obvious list, or a clear quote. So, you’d have to set up this sentence like this:

Now you’ve created the buildup to the list, so it is acceptable to use a colon.

Should You Capitalize the First Letter after a Colon?

Many people make this mistake because there is some confusion surrounding it. In American English, only capitalize on the next word if it is an independent clause that can stand as a complete sentence on its own (although this is left up to writers’ choice, it isn’t necessarily a rule). If it is a dependent clause that makes little sense on its own, then you shouldn’t capitalize on the next word (that is a rule). You should also never capitalize if you are introducing a list. Look at these examples below:

Incorrect        The weather reporter said the weather was: “Hot, sunny and dry.”

Introducing the quote in this way would be technically incorrect, because ‘hot, sunny and dry’ is a dependent clause that makes little sense on its own without the first part of the sentence. So, it should read like this:

Correct        The weather reporter said the weather was: “hot, sunny and dry.”

This would be correct because it shouldn’t be capitalized. If it was an independent clause that followed the colon, then a capital letter would make sense.

Colon vs. Semicolon vs. Dashes

We already know when a colon should be used, but when should a semicolon or dash be?

You use a semicolon when you are connecting two independent clauses that link because of similar ideas, or when introducing a list that is more complicated because it has explanations. Here are two examples of how semicolons are most commonly used:

You can use dashes (more commonly known as em dashes in this style of writing) in the place of parentheses so it doesn’t make for an odd end to a sentence, or you can use them to replace a colon in more casual writing. Like this:

Examples of Using Colons in Sentences:

When to Use a Colon | Picture 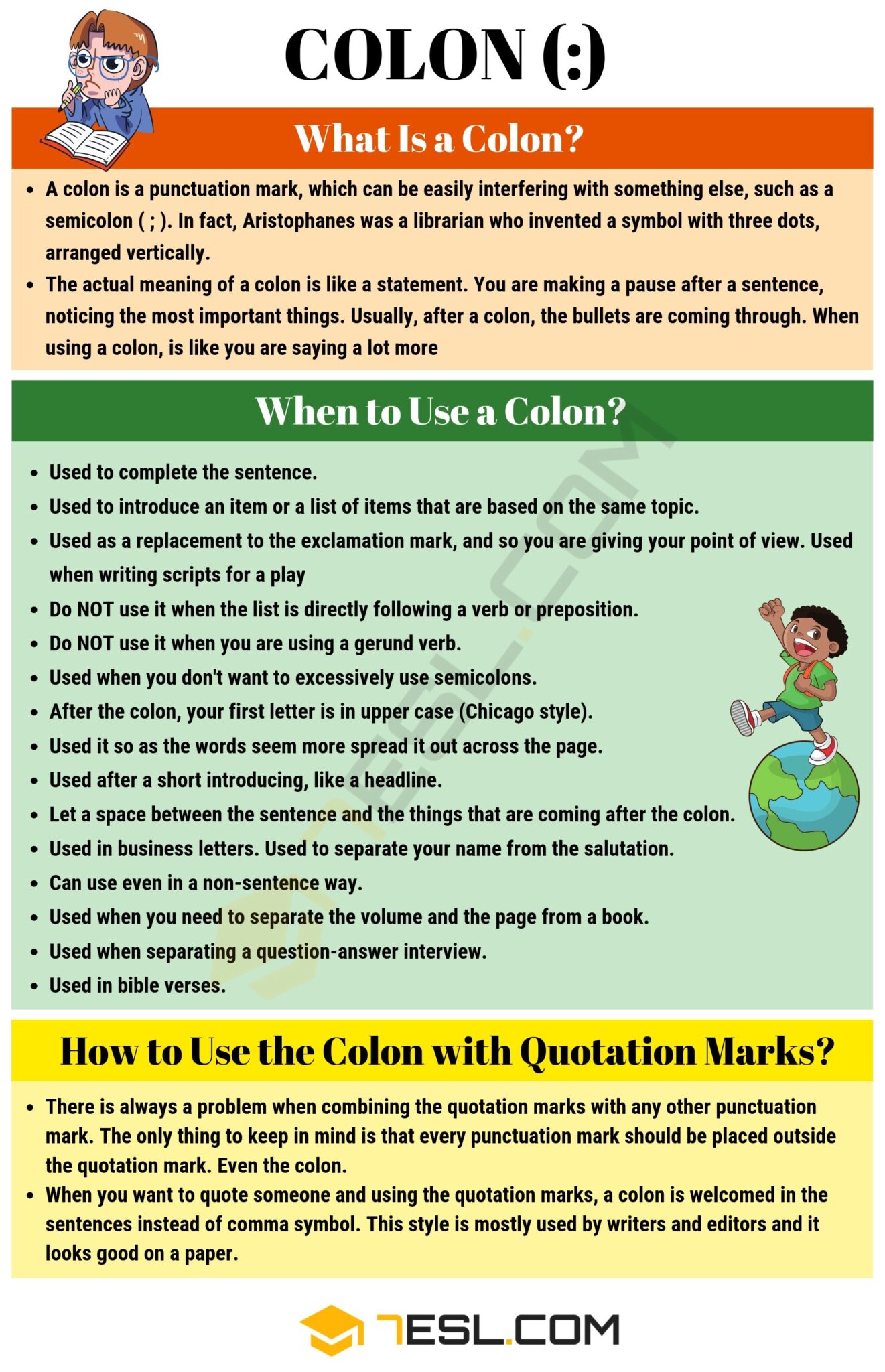 See if you can decide if the following sentences have used a colon correctly or incorrectly.

1) I want to visit Florida for: the sun and the atmosphere.

2) There are two major reasons I’m here today: to help, and to support.

1) Incorrect. The emphasis has not been built up enough to show that the following exclamation is important. It should be:

“I want to visit Florida for two important reasons: the sun and the atmosphere.”

2) Correct! It set’s up the emphasis in the right way.

3) Incorrect. Again, no emphasis. It should be:

4) Incorrect. For the same reason above. Try this instead:

I have noticed a disturbing trend: people are speaking the colon! By this I mean that you can hear the speaker prepare to recite a list by saying “you can do things like” pause, and then list the items. The preceding sentence is also not a complete sentence as it should be in the use of a colon.

I do exactly what you described.
Ty for your post.
I’m working on it. 🙂

Above your example sentence for a list has a verb right before the colon (second bullet point); then later you mention that following a verb you should not use a colon for a list (fourth bullet point).

A part on the human body! My friend has colon polys & has a high blood pressure. FriedaArleyn.

this one…. and an example plz

IAM not understand ing any of this

This one, and an example, please … and for goodness sake, spel your name prolerply.

I hate it when Americans try and explain English grammer. Most can barely speak English at all. What on earth is a period ? I thought it was a time when a girl gets tampons. That’s what mummy told me.