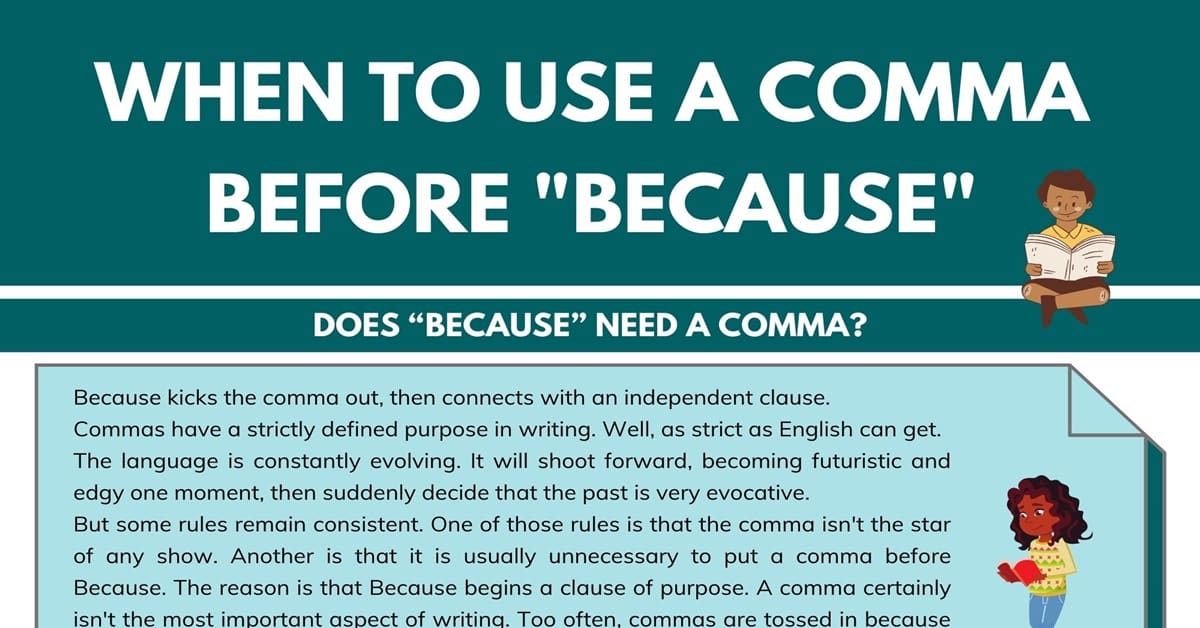 When do you put a comma before because? The comma is the minor celebrity of the grammar world. Popping up everywhere, it tries to make an impression, tries to convince people it is indispensable. If a comma were a person, it would want you to believe you needed it in your writing. In all sorts of places.

Then, you would finish a project—one packed to the ceiling with attractive commas— and you would take a long, hard look at the finished product. A lot like proofreading, actually. That is when it becomes noticeable that there are far more commas floating around than are truly necessary.

One of the places it is easy to let a comma squeeze in where it shouldn’t be—is before Because. It often feels as if a slight pause ought to be there, especially when writing in a conversational style. However, most of the time there is no need for a comma before Because.

When to Use A Comma Before Because

Does “Because” Need a Comma?

Because kicks the comma out, then connects with an independent clause.

Commas have a strictly defined purpose in writing. Well, as strict as English can get.

The language is constantly evolving. It will shoot forward, becoming futuristic and edgy one moment, then suddenly decide that the past is very evocative. In the next moment, nostalgic phrases from 100 years earlier will begin to reshape—or shape again—how we write and speak.

But some rules remain consistent. One of those rules is that the comma isn’t the star of any show. Another is that it is usually unnecessary to put a comma before Because. The reason is that Because begins a clause of purpose. A comma certainly isn’t the most important aspect of writing. Too often, commas are tossed in because it feels right.

Yes, we do bend the rules of grammar a bit, for different types of writing. For instance, a formal essay would never begin a sentence with the word “And”. But a conversational-style piece of writing would. And it does, frequently. But the rules are still there, and they say that a clause which begins with Because is going to ask a question. It will ask ‘Why”. So the Because clause will be subordinate to the independent clause to which it is joined. Automatically, the Because clause will need to lean on the independent clause. So a comma isn’t necessary.

Comma Can Be Used for Clarity

There will be times when the communication is unclear, and only a comma can make it easier to understand.

This leaves more that needs to be done. And if the scene is negative, a comma is likely to be required.

Incorrect: The basketball team did not win because their center was injured.

In this sentence, the comma is finally going to get a solid role. This sentence is totally ambiguous. Did the basketball team win? Is the situation that the team didn’t win because of something their center did? with the center injured, he was unable to contribute, correct?

Or did the team lose? And did they lose because their center was unable to play?

This is enough to make a basketball fan tear up their season tickets. Which would leave them angrier than ever! So the comma has to get in here and rescue this one.

Correct: The basketball team did not win, because their center was injured.

With the comma before Because, the ambiguity is completely gone. The sentence becomes clear. At this point, it doesn’t matter whether comma and Because usually work together or not. The structure of the sentence dictates whether a comma should be there. The clarity for the reader is what is most important when writing anything. If the reader can’t understand, it is like a person standing next to you and speaking gibberish. After they finish, they ask, “Do you understand?” If you didn’t understand, it was no use having them talk.

In the same manner, the written word must be comprehensible in order to make it worth putting words on a page.

Comma Before Because | Picture

When to Use A Comma Before BECAUSE 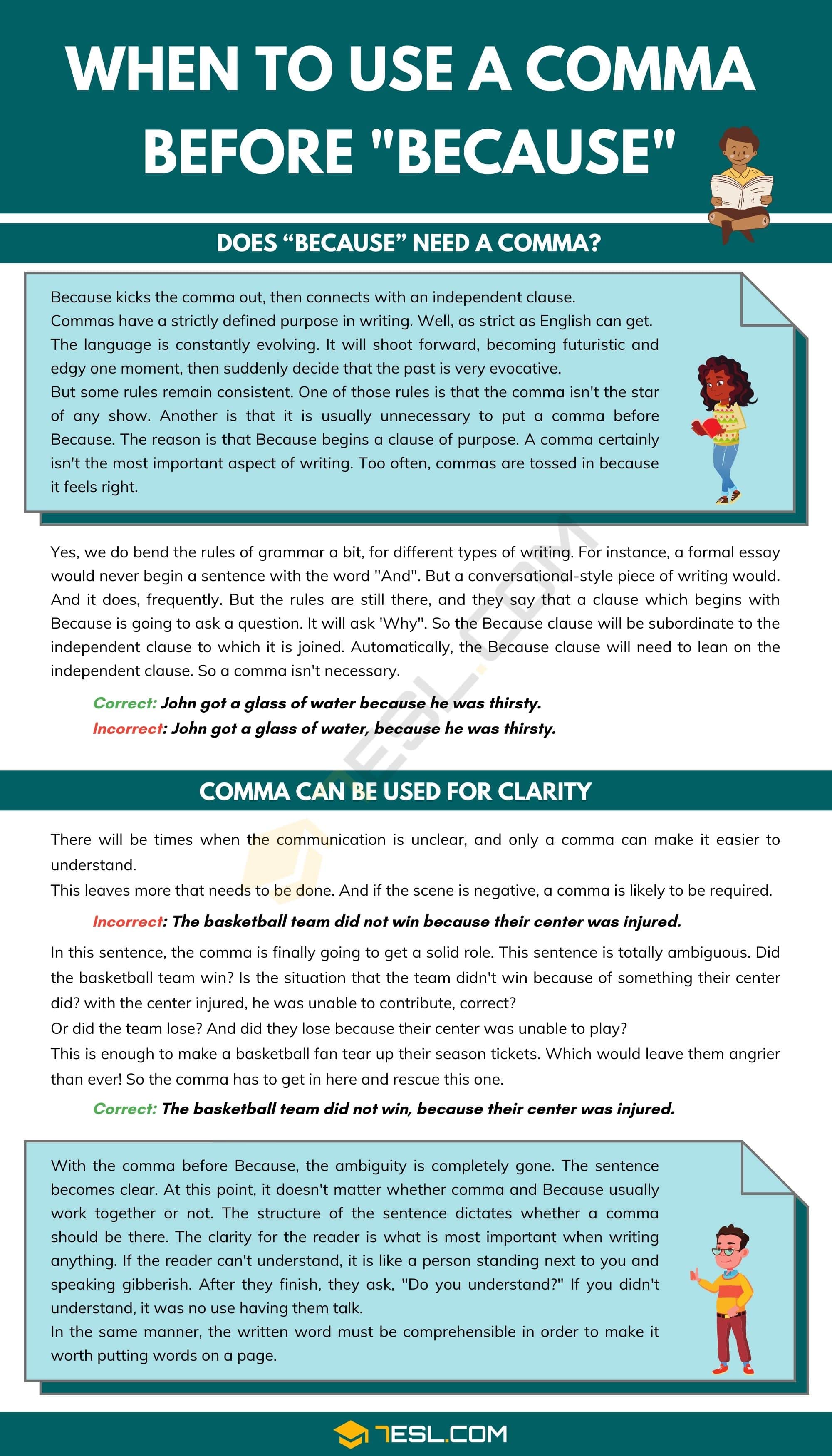 With or without comma?