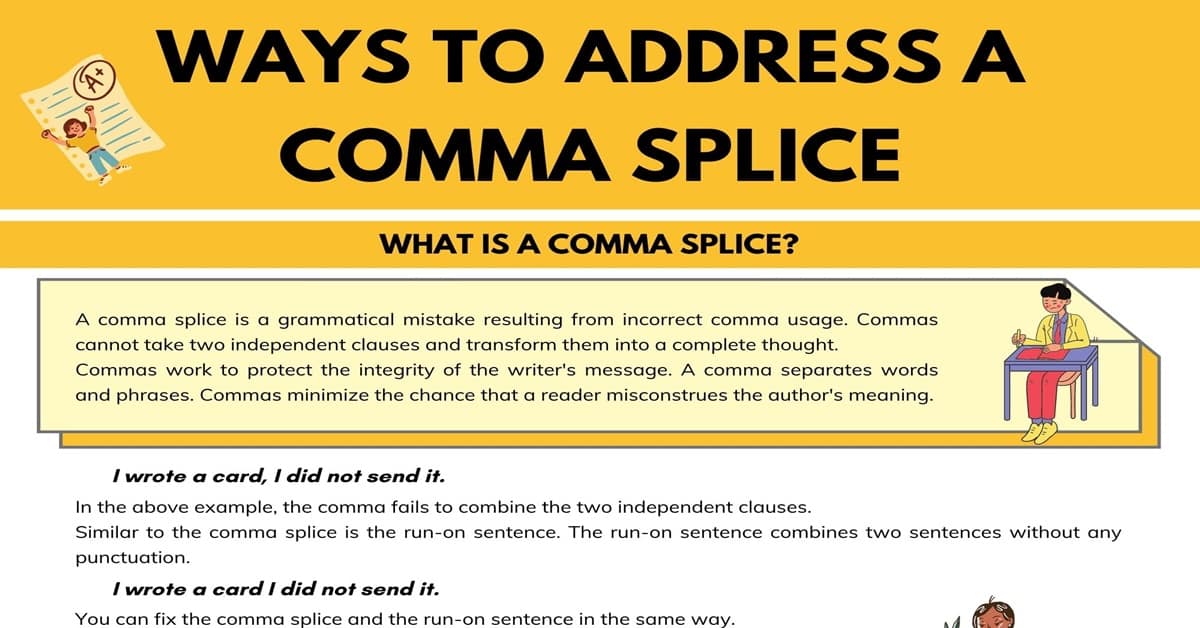 How to fix a comma splice! Commas subtly influence the structure of a sentence. They provide a break in a sentence and work to make a sentence’s meaning crystal clear. The comma’s gentle disposition lacks the power to join two sentences together. When you mistakenly try to join two independent clauses with a comma you create a comma splice.

What Is a Comma Splice?

A comma splice is a grammatical mistake resulting from incorrect comma usage. Commas cannot take two independent clauses and transform them into a complete thought.

Commas work to protect the integrity of the writer’s message. A comma separates words and phrases. Commas minimize the chance that a reader misconstrues the author’s meaning.

Example of a Comma Splice

I wrote a card, I did not send it.

In the above example, the comma fails to combine the two independent clauses.

Example of a Run-on Sentence

I wrote a card I did not send it.

You can fix the comma splice and the run-on sentence in the same way.

4 Ways to Address a Comma Splice

More than one way exists to remedy a comma splice. When writing you can use any of the methods below to create sentences that follow common grammar rules.

I wrote a card, but I did not send it.

Introduce a Period for a Concise Message

Replace the comma between two independent clauses with a period. A period has the strength to finish off a thought. The period will turn the clauses into two distinct sentences.

I wrote a card. I did not send it.

The resulting two sentences follow the rules of grammar. These short sentences can sound curt. If you do like the flow this fix creates you can always find another way to solve your comma misstep.

A period would work best in a sentence where one of the independent clauses is longer than the other. If the two clauses appear separate but follow logically then consider using a period.

People often think that semicolons are harder to wield than periods. Most people receive less tutelage concerning semicolons. This makes people leery of employing a semicolon to solve a comma splice. In response, they rely on other forms of punctuation to communicate.

In grammar as well as in life it is important to expand your comfort zone. With more grammar rules under your belt, you will become a better writer.

I wrote a card; I did not send it.

A semicolon can join two independent clauses. Use a semicolon if two clauses relate or logically connect. If the clauses appear in a logical or timed sequence you will want to use a semicolon.

The clause followed by the subordinating conjunction becomes stressed. In the first sentence “although” highlights the “I did not send it.” part of the sentence while the second sentence finds “although” stressing the “I wrote a card” part.

It is crucial to remember that not all conjunctions function the same way. A comma pairs nicely with a coordinating conjunction. In contrast, a comma and a conjunction adverb do not work well together.

Never situate a comma before a conjunctive adverb. The result would negatively affect the grammatical structure of the sentence.

A comma placed before constructive adverb results in a comma splice. It fails to fix the initial problem.

Incorrect Use of a Conjunctive Adverb

I wrote a card, however I did not send it.

“However” is a formal conjunctive adverb. Overuse of the word “however” makes your writing stiff. Use “however” to emphasize key arguments. or to show a contrast between complex sentences.

Note some language scholars do not like using “however” to introduce a sentence.

In the third sentence of the second paragraph of the section, “Introduce a Period for a Concise Message”, the word, NOT, is missing from the sentence, “If you do____ like the flow this fix creates, you can always find another way to solve your comma misstep.” I hope this helps. Thank you for your clarity everywhere else!