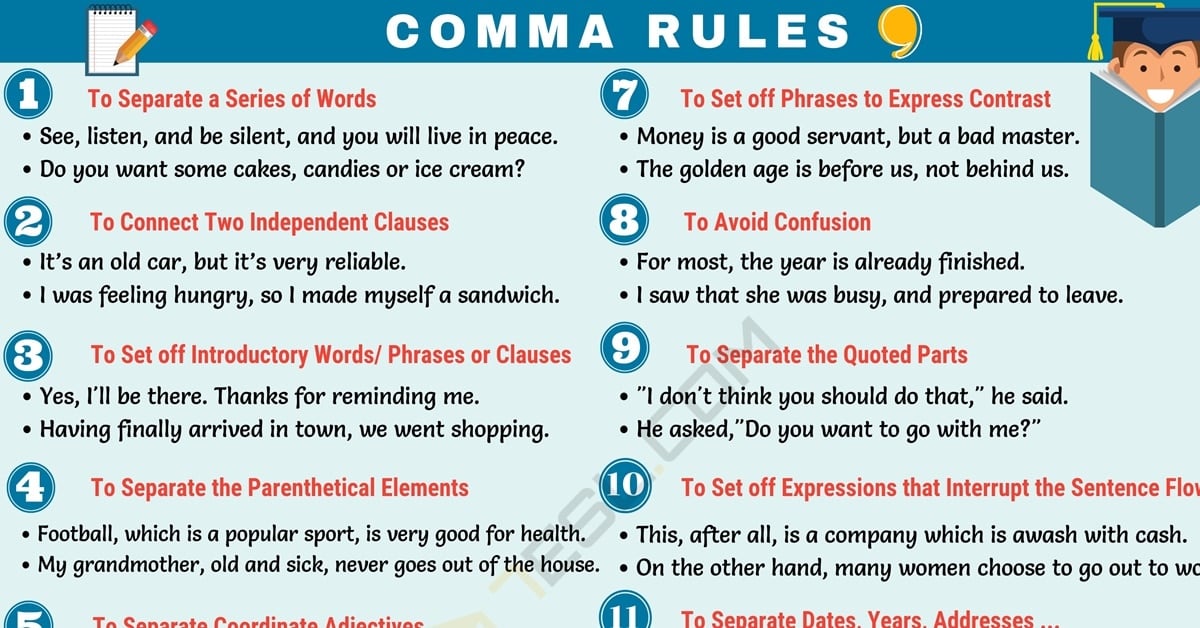 Everybody knows what a comma is, right? We use them every day whenever we write anything. But did you know that there are plenty of common mistakes that people make when using a comma in a sentence? Sometimes we use them when they aren’t necessary, and sometimes we don’t use them when they are. This guide will take you through what exactly a comma is (so you can understand when to use them correctly), when not to use a comma, and provide you with some common comma mistakes! We’ll also provide a quiz at the end to test your new understanding of commas.

What is a Comma?

A comma is a punctuation mark (,) that is used in a sentence to show a pause. It may connect two parts of a sentence or else separate items in a list. Commas are generally used to make a piece of text more reader-friendly, as without them a reader may become overwhelmed by the sheer volume of uninterrupted text.

A comma is used to denote a pause in the sentence, which is shorter than a colon or a semicolon. A comma is used to show the difference between two separate ideas or elements within a sentence. Commas have other usages as well, as they can be used to separate numbers, and write dates.

American vs. British English Use of a Comma

Below we’ll provide an example in which American writers and British writers might differ in their use of the serial or Oxford comma:

I’m going to pick up bananas, grapes, apples, and pears. – In American English, a serial comma is often used in all lists, regardless of whether it would make sense without one.

Key Points to Remember When Using a Comma

The key thing to remember about commas in sentences is that they should be used to break up clauses. If you have more than one clause within a sentence, then using a comma is almost certainly necessary (unless you have another more appropriate punctuation mark to replace it).

When to Use a Comma

When to Use Commas (with Examples of Using Commas in Sentences)

Separate a Series of Words

We use commas between words in a series. Notice that a comma does not follow the last word in the series.

Separate a Series of Phrases

We use commas to separate two complete statements.

Set off Introductory Phrases or Clauses

We use a comma to separate an introductory element from the rest of the sentence.

After Certain Words that Introduce a Sentence

A parenthetical element adds extra information and can be removed from the sentence without changing the meaning of the sentence.

We place commas between adjectives, if two ore more adjectives modify a noun in the same way. These are called coordinate adjectives which can be identified by the fact that the word and can be inserted between them and their order can be reversed.

Set off Phrases to Express Contrast

We also use commas to set off contrasting expressions beginning with not, but…

We also add a comma in some cases to make a sentence clear.

Set off Expressions that Interrupt the Sentence Flow

Separate a Statement from a Tag Question

We use this punctuation mark to set off a tag question which is used at the end of the statement to ask for confirmation.

When Not to Use a Comma

As a general rule though, whenever we use a comma in a sentence we should test if it works by reading it and taking an exaggerated pause where the comma is. If it feels unnecessary or as though it takes away from the meaning or tone of the sentence, then you should probably remove the comma and see if the sentence works better without it.

Common Mistakes with a Comma

Below are the most common mistakes that people make when using a comma.

When There Are Only Two Items in a List

People often get in the habit of adding a comma whenever there are more than one item/object/subject/character in a sentence, and people can be tempted to add an unnecessary comma here. For example:

This comma is unnecessary because there are only two items on this list. We should write it as:

Notice how the first comma remains. That is because ‘From the store’ is an introductory phrase that is a subordinate clause, because it makes no sense without the rest of the sentence. So, a comma is necessary here, but not to separate the two items in the list.

When Two Actions Relate to One Subject

If there are two actions that both relate to the same subject of the sentence, then a comma is unnecessary. However, plenty of people still make this mistake. For example:

A comma is unnecessary in this case because both actions refer to the subject ‘I’. So we should write it as:

If a list is given and then the sentence continues after the list, people are tempted to place a comma after the last item. This is, however, a mistake, and a very common one at that. For example:

The problem with this mistake is that pausing after Lisa where the comma is somewhat natural. So when reading back your work to identify the mistake, it may be difficult. Just remember, that a comma is never necessary before the first item in a list, or after the last item in a list. We should write it as: 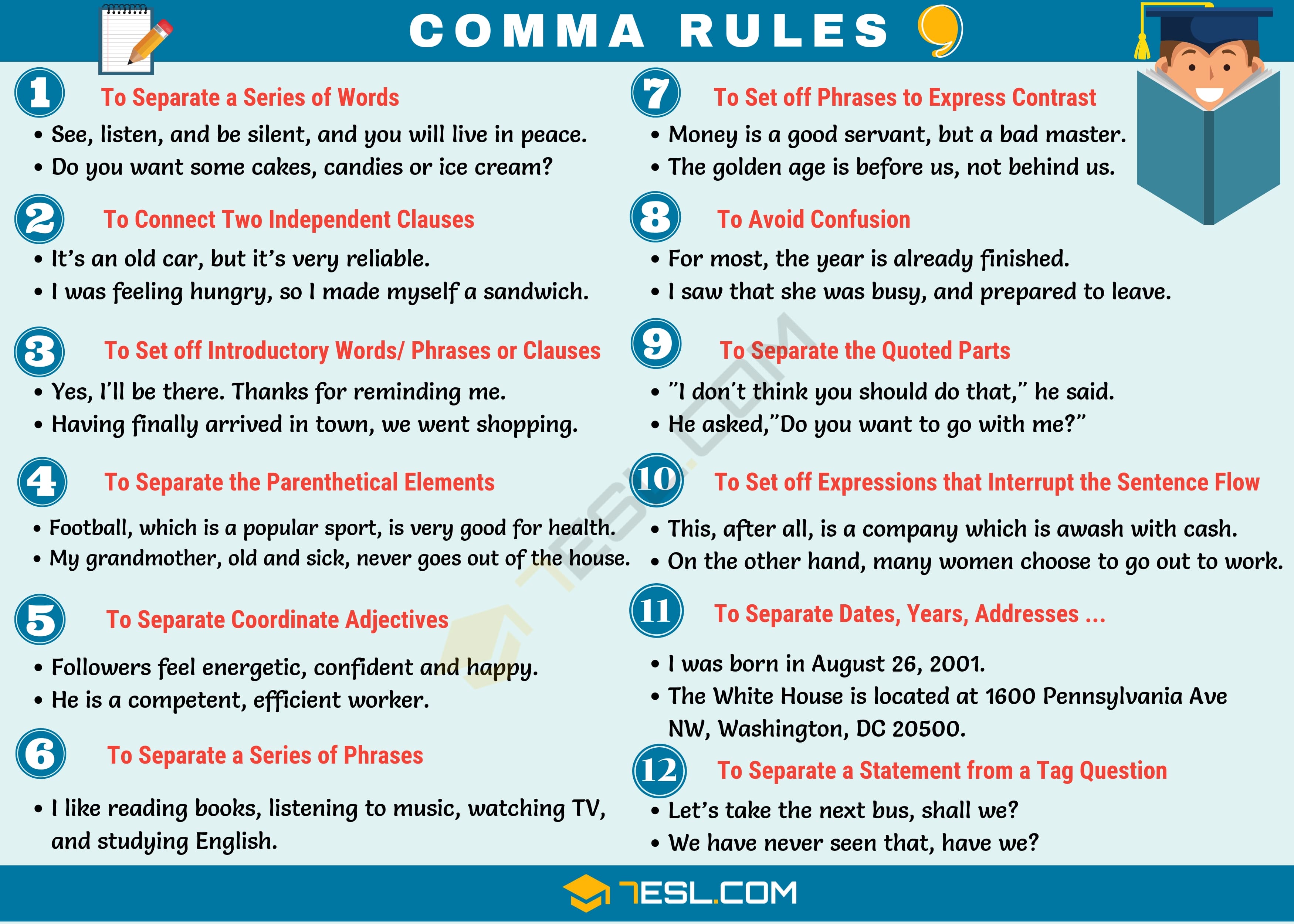 Now that you know all about commas, we’ve put together this little quiz to see if we can catch you out. Decide whether the following sentences use a comma correctly or incorrectly, and if you think it’s incorrect, think about how it should be written:

There is no need for the comma after Tim, as there are only two items in the list. Walking down the street is also a subordinate clause acting as an introductory phrase, so it should be:

Just remember that British English would omit the comma between sugar and butter, but it is still perfectly correct to write it using the serial or Oxford comma if you wish.

‘Whose tattoo was still healing’ is an example of a subordinate clause that has been imbedded in the main clause to add extra information. Here, both commas are necessary.

Remember, we never use a comma after the last item on a list. So it should be:

There are two actions that both relate to one subject (Tim) so a comma is unnecessary. It should be:

The second sentence for number 1 is incorrect. The correct way to right the sentence is, “Do you want some cake, candies, or ice cream?”

If you are going to correct it then please make sure you are using the correct words yourself. The word would be write not right.

do you guys play minecraft?

The bottom of the picture of the “The comma rules” is cut i.e. invisible.