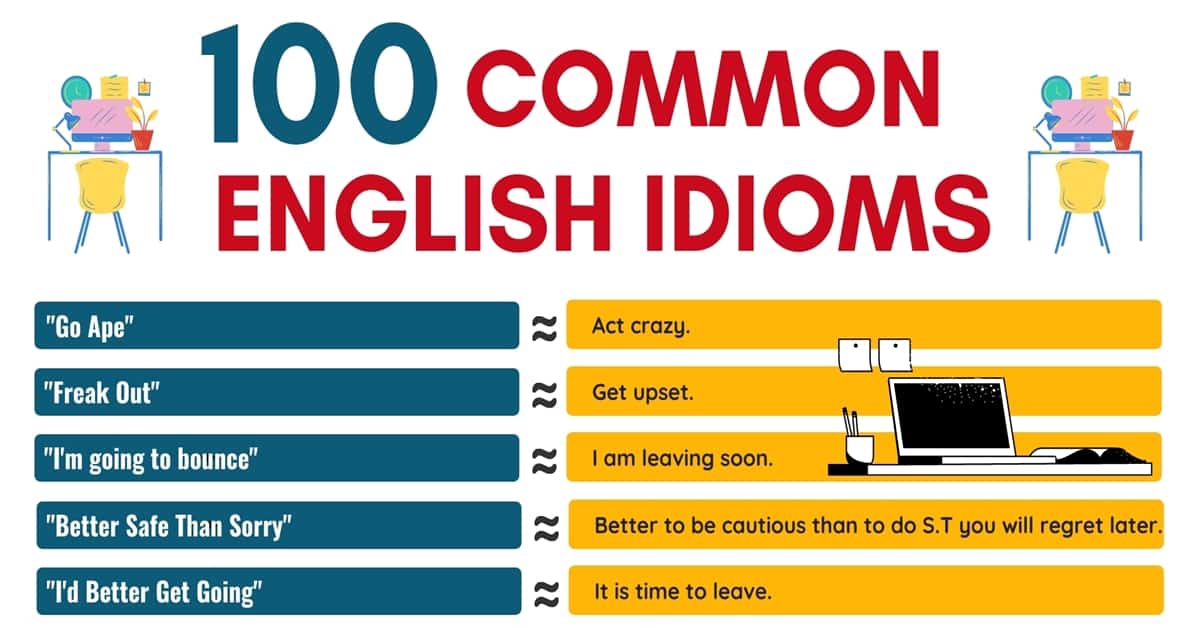 What are common idioms in English you often use? It’s no secret – the English language can be a little frustrating at times. Okay, maybe more than a little frustrating. English can be “shake-your-fist-and-yell” frustrating. Just when a rule begins to make sense, it turns out it is only a rule part of the time. Almost as if the language has a strange sense of humor.

One thing seems certain – English appears to have fun. How can you tell? By the idioms – strange phrases used to say something or describe a situation. Idioms seldom say what we think they’re saying, so they add color – and sometimes laughter – to speech.

But what are we waiting for? Instead of standing around like a bunch of old stumps, let’s get on the ball and take a gander at-

>>Example: Wow, it’s raining cats and dogs out there!

To criticize. Sometimes it can mean to tease.

>>Example: Jane’s boyfriend gave her a bad time because she burned dinner.

Said to someone who is being negative.

5. “Busy as a One-Legged Man in a Butt-Kicking Contest”

Kind of says it all.

To leave out something important in order to save time or money.

To do something that needs to be done, even though it is painful or extremely uncomfortable.

8. “Couldn’t Find His Backside with Both Hands”

Used to describe someone who can look straight at something when hunting for it, but still not see it.

>>Example: Mary found Mark’s book for him. She knew how he was—Mark couldn’t find his own backside with both hands.

A wish for good luck. Began in show business. It was bad luck to wish “good luck”. So they began wishing “break a leg instead.

Don’t quit or give up.

No more chances; I am out of patience.

12. “Doesn’t know his backside from a tomato can”

Doesn’t know much about it.

Someone you can’t trust.

Do as well as they need to do.

Not come out and tell the truth. Not lie, just not say what is the hard truth.

>>Example: “Honey, do these pants make my butt look big?”

“You know I love your butt. And those pants are a great color. They really complement your skin.”

“Stop beating around the bush! Do the pants make my butt look big?”

Nothing can take me away from this moment or from you, etc.

Two people who are either alike in many ways or are always together.

Used when someone doesn’t seem to fit some places.

>>Example: She felt like a square peg in a world full of round holes.

“Whoa! Hold your horses! Do you have enough money?”

Be very careful about what you say or do, for fear of offending someone or making them angry.

When there is an elephant in the room, there is a problem that needs to be addressed. However, rather than deal with the problem, people pretend it doesn’t exist.

25. “What Happens in Vegas stays in Vegas”

Keeping private what someone does, and not telling anyone else.

Begin chatting or talking to someone, usually someone you don’t know very well.

Not too stinking likely.

>>Example: “I’m going out, but I thought you could stay home tonight.”

What you just said is definitely true.

>>Example: “This movie sure is long!”

“Boy, you can say that again.”

A person has no talent for dancing.

Holds onto their money with a firm grip.

>>Example:: Greg went surfing and the waves were off the hook.

Not make someone pay for some wrong they have done, or not call a person to the task.

Forgive someone when you are mad at them.

To pull attention off of a person who has just done something good.

To make a lot of noise yelling.

When you take a rain check, you are refusing the offer of something now, but saying you would like it later.

No hair on the head.

People who wear their hearts on their sleeves fall in love easily.

I am leaving soon.

Better to be cautious than to do something you will regret later.

It is time to leave.

59. “So Mad I Could Chew Nails and Spit Bullets”

An exclamation of frustration.

Give someone some forgiveness when they don’t do perfectly.”

The first time you look at someone or something, you love it.

I am very tired.

Escaped quickly and didn’t leave anything behind.

Used to refer to a very clean surface, such as a floor after mopping.

When something is very enjoyable.

73. “It’s Raining Harder than a Cow Wetting on a Flat Rock”

74. “She is so Cheap, She Squeezes a Quarter ’til the Eagle Screams.”

I want to do it before I die.

Someone who has a flair or excitement about them that makes them seem more important than they are.

Things go against the grain when they are irritating, or something a person doesn’t like doing.

When someone leads two completely different lives, but no one knows it.

Usually used in reference to something like a rumor.

When all the arguments have been presented/when it is time to move forward.

To have used up all one’s energy.

When a person lays down and immediately goes to sleep.

The person being talked about just walked into the room/called.

I have something more important to do.

To barely make it.

>>Example: I made it to the store before closing time, but only by the skin of my teeth.

Let’s wait and deal with that when it becomes absolutely necessary.

Be aware of what is going on around you.

under
Reply to  under