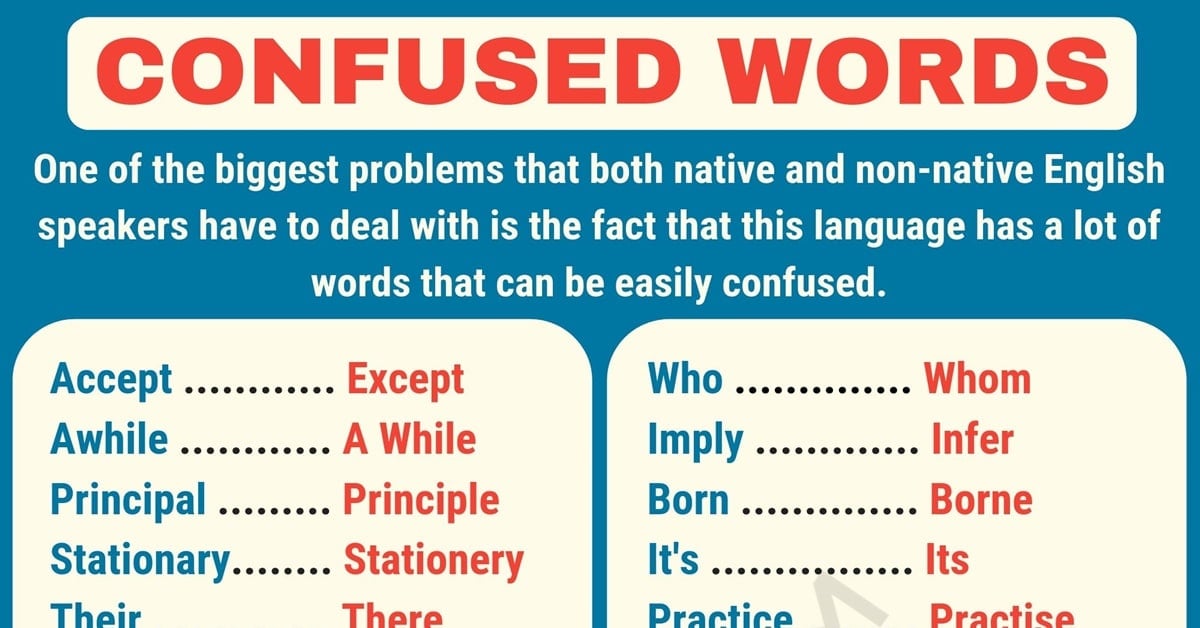 Commonly Confused Words! About one-fifth of the Earth’s population speaks English either as their first or second language, and it’s very unlikely that there’s a big number of people who find this language easy. There are lots of complicated grammar rules, tons of small details that are very important to always keep in mind, many phrases that sound just weird, and thousands of other things to be aware of. One of the biggest problems that both native and non-native English speakers have to deal with, however, is the fact that this language has a lot of words that can be easily confused.

Some commonly confused words are homonyms: they are spelled and pronounced exactly the same but they have different meanings. For example, the word kind can mean both caring (“a kind person”) and type (“a kind of food”), while the word book can both be a noun (“an interesting book”) and a verb (“I book a flight”).

Some other commonly confused words are homophones, and these sound exactly the same but their meanings and spellings are different. They might be even worse than homonyms because, with them, you have to be extra careful when writing. There’s nothing more embarrassing than sending a very important e-mail to your professor or boss where you use accept (“to receive”) instead of except (“excluding”), or your instead of you’re, simply because they look and sound so similar.

Finally, there are words that are spelled differently but their meanings are so similar that they have almost everybody stopping to doublecheck which one means what exactly. For instance, how do you tell the difference between a lawyer and an attorney? Or between a lynx and a bobcat? Of course, these might not be words that you’ll use every single day but still, if you do use them, you want to be sure that you do so correctly.

These commonly confused words make our lives a lot more difficult. When talking or writing in English, it’s impossible to relax even for a moment: almost every word might be tricky and might require a lot of thought and attention. So, composing a formal piece of writing, no matter how short it is, might turn out to be a very difficult and exhausting task. Talking with friends isn’t better either: you get two words confused once, and they’ll never forget that and will keep mocking you for the rest of your life.

In short, in the English language, there are plenty of things to be confused about. However, there’s nothing to be afraid of. Even with so many pairs of words that look or sound the same, you will be able to slowly get through every single one of them, remember the differences between commonly confused words and feel more confident when you use them in the future. Sometimes, there even are tricks that will help you associate the spelling of the word with its meaning, making it easier to figure out when each word fits. If you pay some extra attention and constantly practice, commonly misused words won’t be a problem for you anymore.

Lose is a verb and has a /z/ sound in pronunciation. Lose means to be unable to get something.

Loose is an adjective and has a /s/ sound. Loose means not tight.

Farther is used when referring to physical distance.

Further is used when referring to things which are not physical.

Bear when used as a verb means to endure hardship or hold something heavy. When used as a noun it means an animal but we are not referring to that.

Bare is an adjective meaning something that is uncovered or naked. Bare can also be used as a verb to refer to the act to of uncovering.

Complement is used when two objects fit each other perfectly while compliment refers to the praise words given when something good has been done. Compliment can also be used as a werb to refer to the act of giving a compliment.

Affect is a verb while effect is a noun. Both affect and effect are used to show consequences of actions.

Advice is a noun while advise is its verb. Both of them mean to give good guidance on an issue.

Resign means to quit a job and is pronounced with a /z/ sound. Re-sign with a hyphen means to sign a contract again or keep a job which you are currently doing.

Capital may mean uppercase letters or money for beginning a business or a central governing city. Capitol is a building where a legislative council meets.

Empathy refers to the ability to someone’s feelings while sympathy is feeling sorry for someone who is suffering.

Principal can be used as a noun or adjective. As a noun, principal refers to the head of a school while as an adjective it refers to the most important thing. Principle is always used as noun to signify a trusted belief.

To is a preposition showing direction.

To can also be used in infinitive verbs.

Too is used to intensify what is being discussed and can mean ‘also’.

Stationary refers to anything which cannot move. Stationery is used to refer to letter writing material especially high quality material.

There indicates a place or venue. Their is a possessive pronoun in plural.

lmply means to point out something without mentioning it directly. Infer refers to deducing something out of a situation that is not clear.

Who’s is a contraction of who is while whose is a possessive pronoun showing ownership.

A lot is a quantifying phrase meaning much of something. Allot means to distribute something

Except means to exclude.

Adverse means something os someone is hostile towards you or a situation. Averse means to lie on the opposite to the majority.

All Ready vs Already

All ready is a phrase that means all is set. Already means prior to or before a specified time.

All is a quantifier meaning each item in a group has something common. Every means each of something.

All Ways vs Always

All ways means each item of a group of items. Always means every time.

Appraise means to commed or praise. Apprise means up to date.

Birth means the act of bringing up new life. Berth is a space allocated to ships or cars for parking.

Borrow means to receive something from someone temporary. Lend means to give or borrow something at a cost.

Can means able to. Could implies that there is a possibility but not very sure.

Cash is money in physical form, cash or bills. Cache is storage used to store valuable items which will be retrieved in future rapidly.

Desert it big dry portion of land that has no vegetation cover and is barren such that plants can’t thrive. Dessert is a sweet confection served as the last course of a meal. 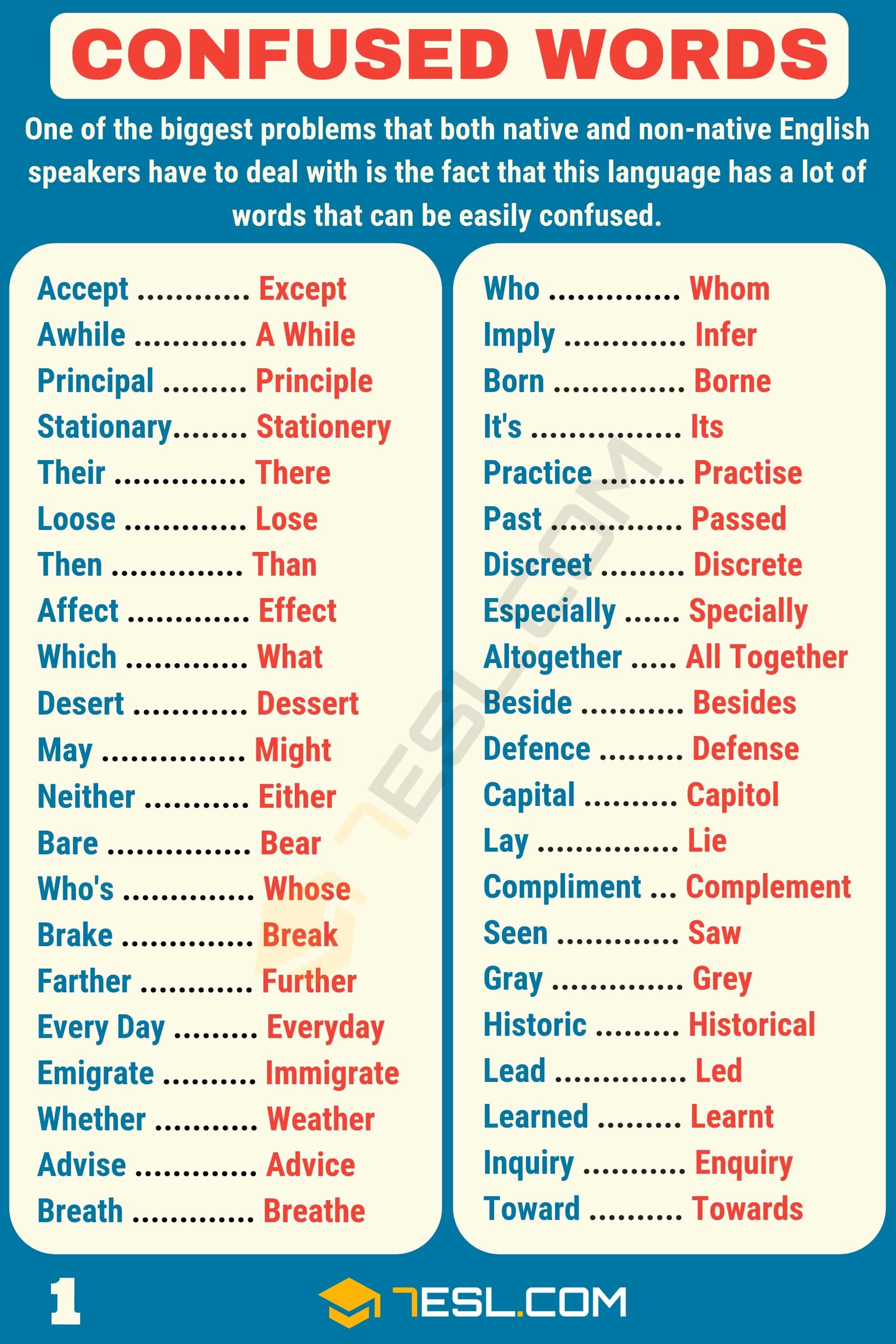 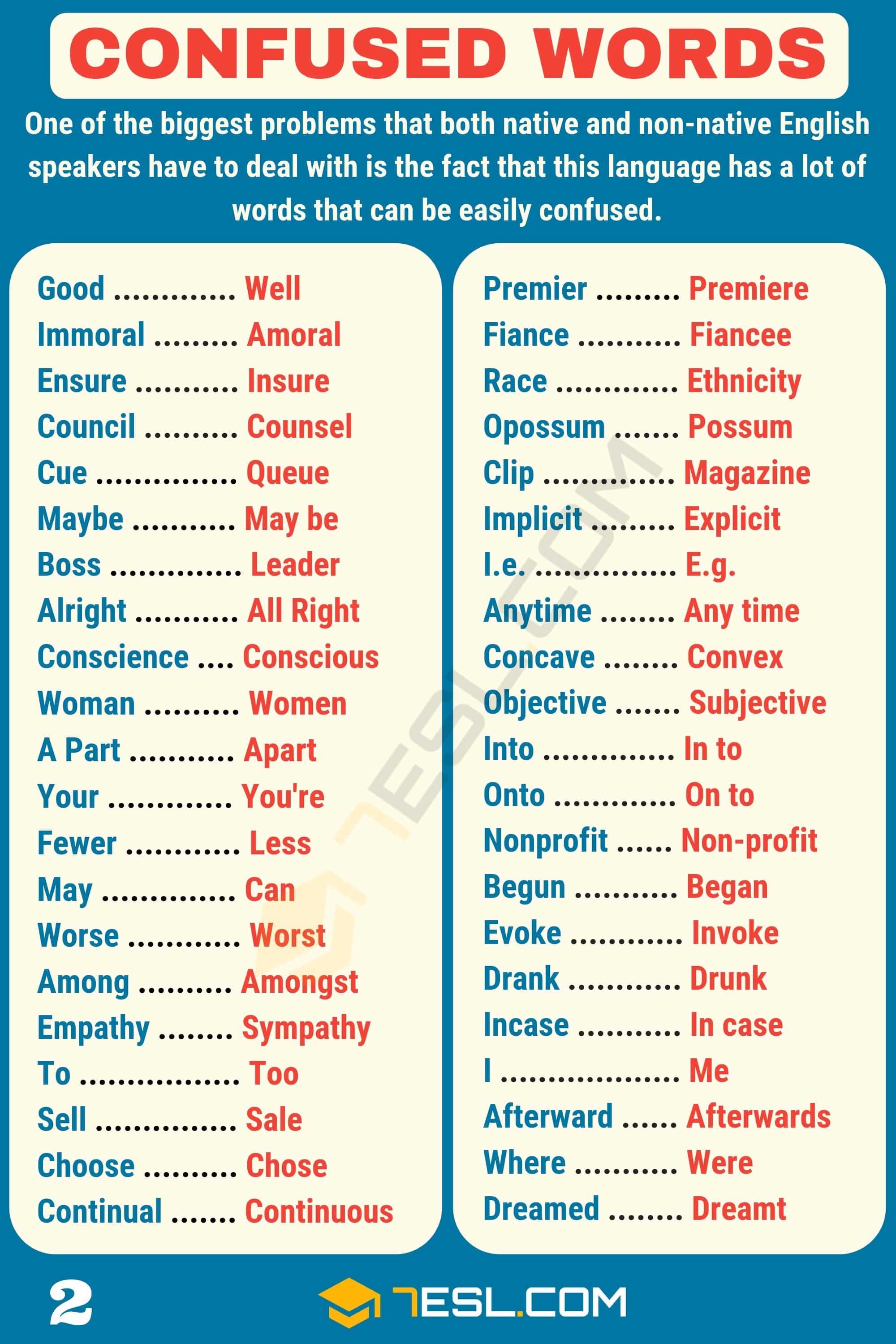 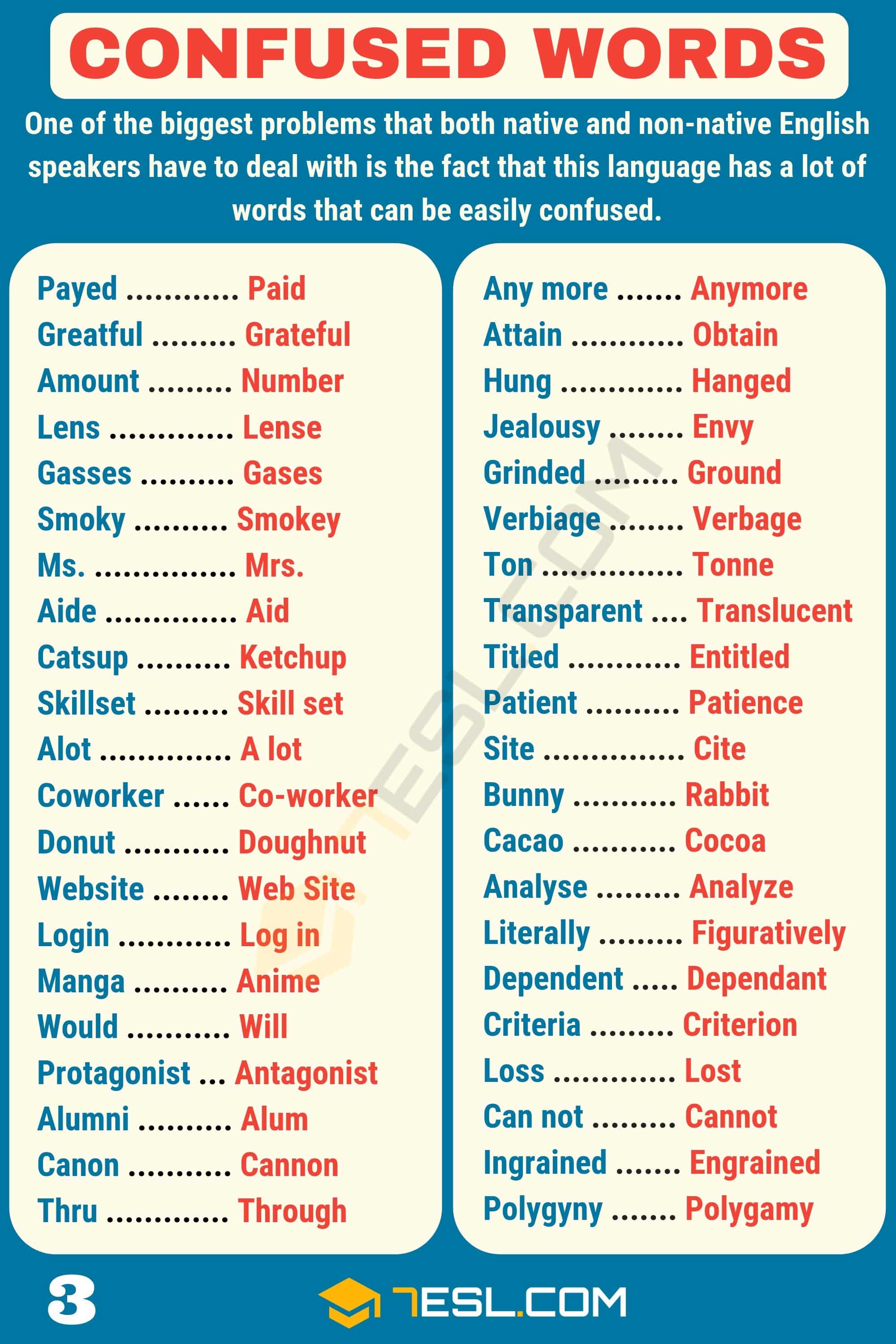 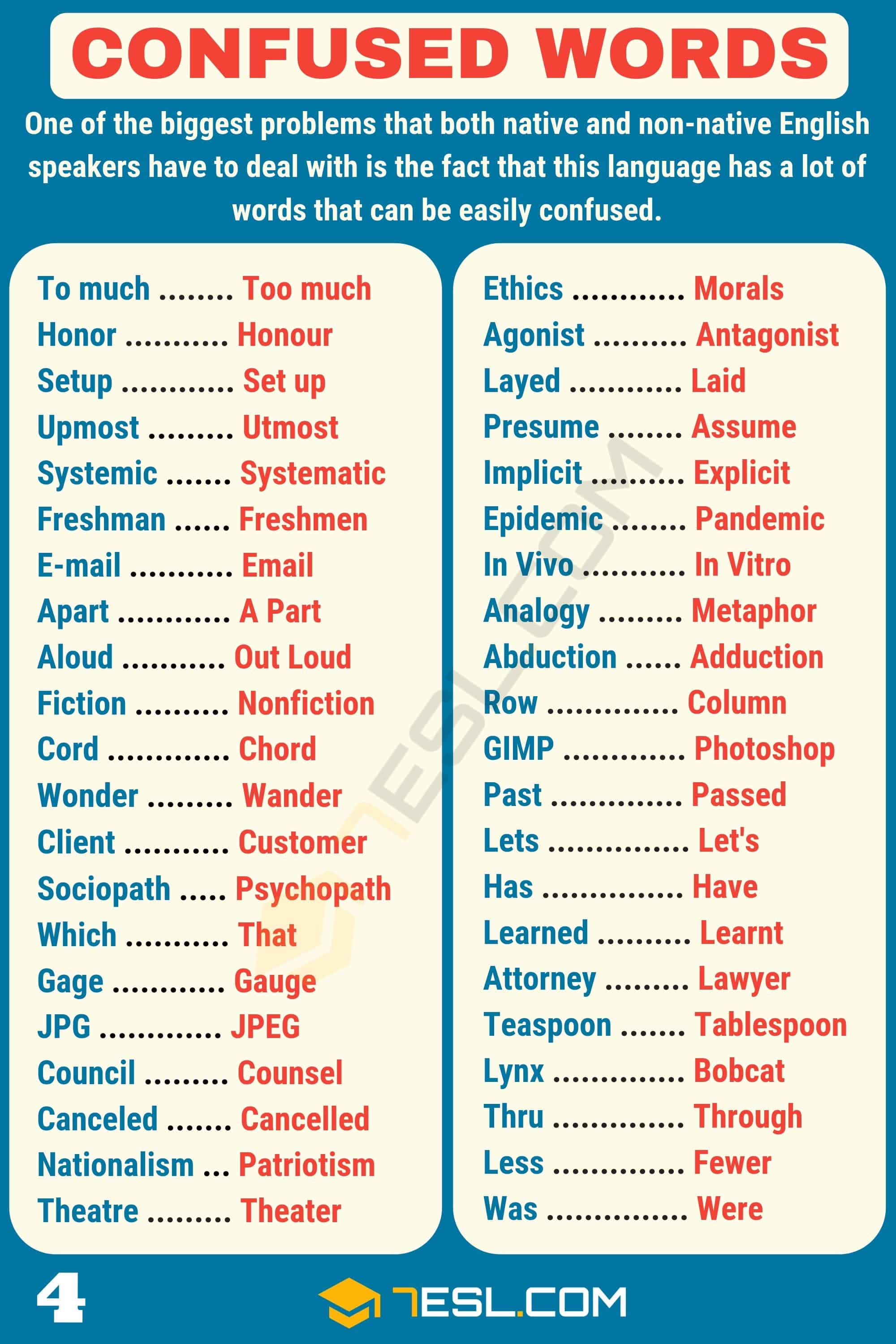 Commonly Confused Words You Should Know 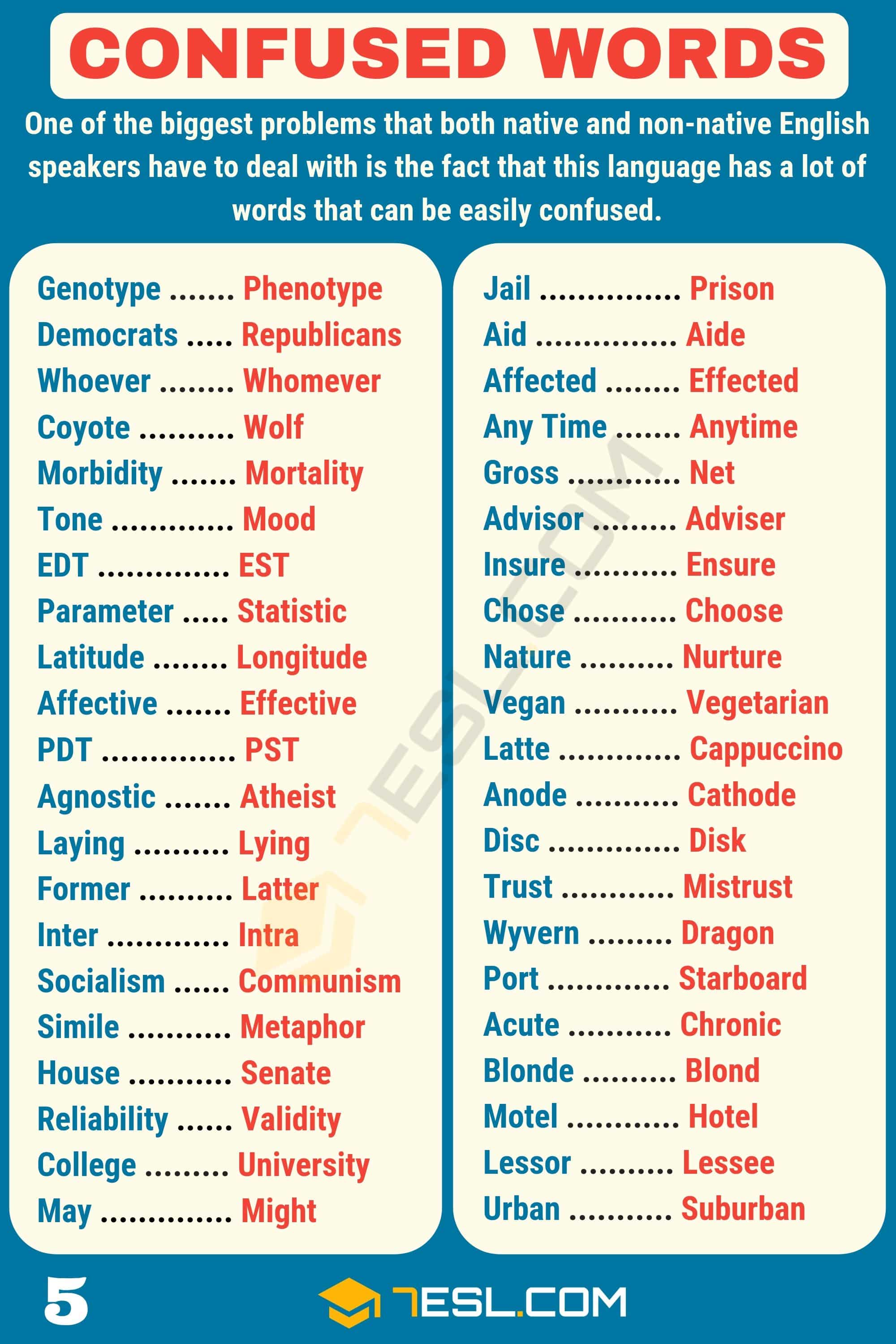 My name is Mihai and I’m from Romania. I like very much your Chanel because I trying to learn English but I don’t have success and I help because I can’t do it on my on . Are you able to do online courses on Skype just for a while until I understand what steps need to be followed?

We can practice online on Skype if you want

As you are interested in English. So I can suggest you to watch more Hollywood Movies with Subtitiles. Because when you get into a movie, the knowledge of language goes into “Sub-Contious” mind. This way, you will unknowingly learn what you had to learn in the best possible way. By the way, when got enough of it, then you can dive into it’s Grammer Part (Rules). Believe me, it will boost you English. Just play with it. You will learn anyway.

I just came across this site. All information on it wonderfully presented! Thank you!

These words make me confused. I am very confused with these confusing words.