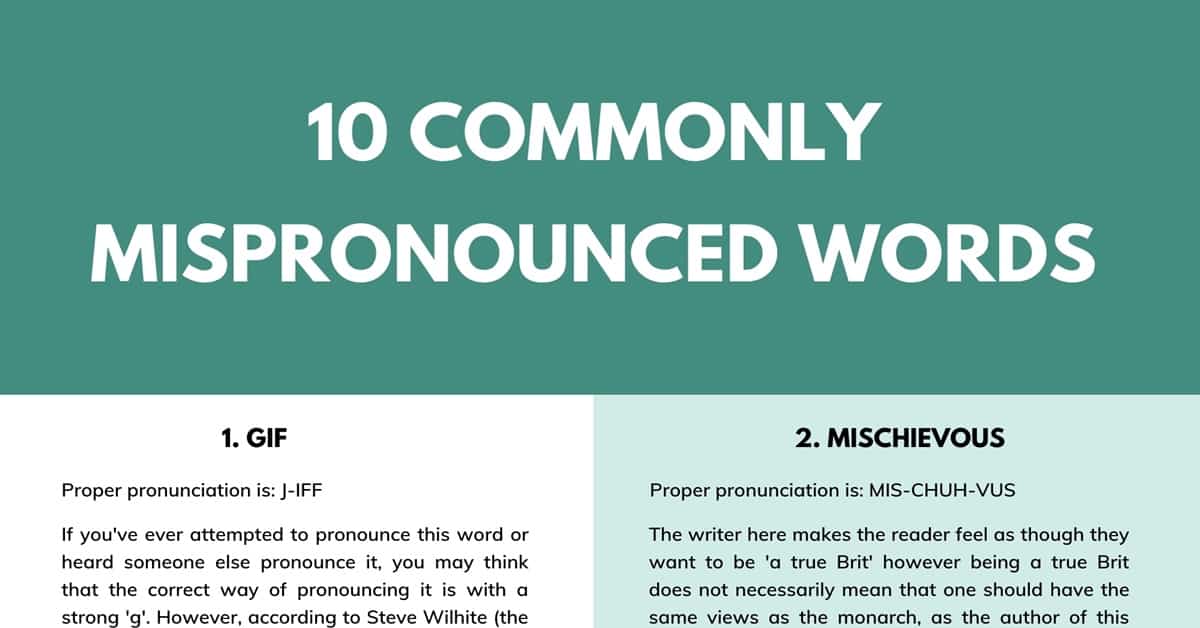 Most commonly mispronounced words and how to avoid them! As you may already know, the English language is made up of 350 different languages. This may explain why there are so many words that are pronounced in a completely different way than they are spelled. Another tricky thing about the English language is the fact that it has many different accents, which means the same word can have various different pronunciations depending on where you are. For example, the word ‘vitamin’ is pronounced as vit-a-min in England but in America, it’s pronounced as vite-a-min.

Mispronouncing English words happens more often than you may think, you may have even been involved in a debate one time with a friend about what the correct pronunciation of a word is. In fact, there is a very high chance you have been pronouncing a word incorrectly this whole time, but don’t worry because I’m about to share with you the most commonly mispronounced words.

If you’ve ever attempted to pronounce this word or heard someone else pronounce it, you may think that the correct way of pronouncing it is with a strong ‘g’. However, according to Steve Wilhite (the developer of GIF’s) the proper pronunciation for this word is in fact ‘jiff’. Many people still use the mispronunciation of this word, since it sounds a lot cooler.

The funny thing about this word is we’ve actually been pronouncing it wrong since the 16th century and despite many attempts to get us to start pronouncing it correctly, many still mispronounce it. Not only are we not supposed to pronounce the ‘ee’ sound in the middle of the word, but the ‘ee’ sound after ‘v’ isn’t even there to begin with.

This word is definitely one of the most commonly mispronounced words, since most of us have done it at least once. We tend to think that the first ‘r’ in this word is silent, but no, it’s just as loud as the one after it.

You probably hear this word being pronounced as ‘pro-noun-ciation’, since that is how you pronounce the words ‘pronounce’ and ‘pronouncing’. But no, there is no ‘noun’ sound, it’s ‘nun’.

Over the years there have been many debates on what the correct way to pronounce the word ‘salmon’ is and although many of us believe ‘sal-mun’ to be the correct way, it turns out that the ‘l’ is silent and the ‘mon’ part isn’t pronounced as ‘mun’ but ‘min’, instead. So, if you’ve been arguing with your friends that the correct pronunciation is ‘sam-in’, then congratulations. You were right.

You would be surprised by how many native as well as non-native English speakers pronounce this word as ‘axe’ instead of ‘ah-sk’, no one really knows how this pronunciation became common, but many agree that the word ‘ask’ is oddly uncomfortable to pronounce and therefore decide to go with ‘axe’, instead.

When it came to spelling this Norse-originated word, many would forget the letter ‘d’ and therefore began pronouncing it as ‘wed-nez-day’ in order to remember its correct spelling and although that may have been helpful, it began to be considered the proper way of pronouncing it.

In some English speaking countries, you may hear this word being pronounced as ‘stoh-mahk’, especially because many people feel that just like the word ‘ask’ ‘stomach’ is an awkward word to pronounce. Regardless, the proper pronunciation is ‘stum-ick’.

If you’ve found yourself pronouncing this word as ‘mee-mee’ or ‘m-eh-m’, don’t worry you’re not the only one. In fact, many people weren’t even aware this word even existed at all, until internet memes began to swarm the internet.

If you are at a restaurant after not eating all day, begin to order a sandwich, and realize that you can’t remember how to pronounce this word, don’t worry. Just close your eyes and think about it. In a moment or two, you will be ready. Open your eyes, call the waiter over, and order soup. 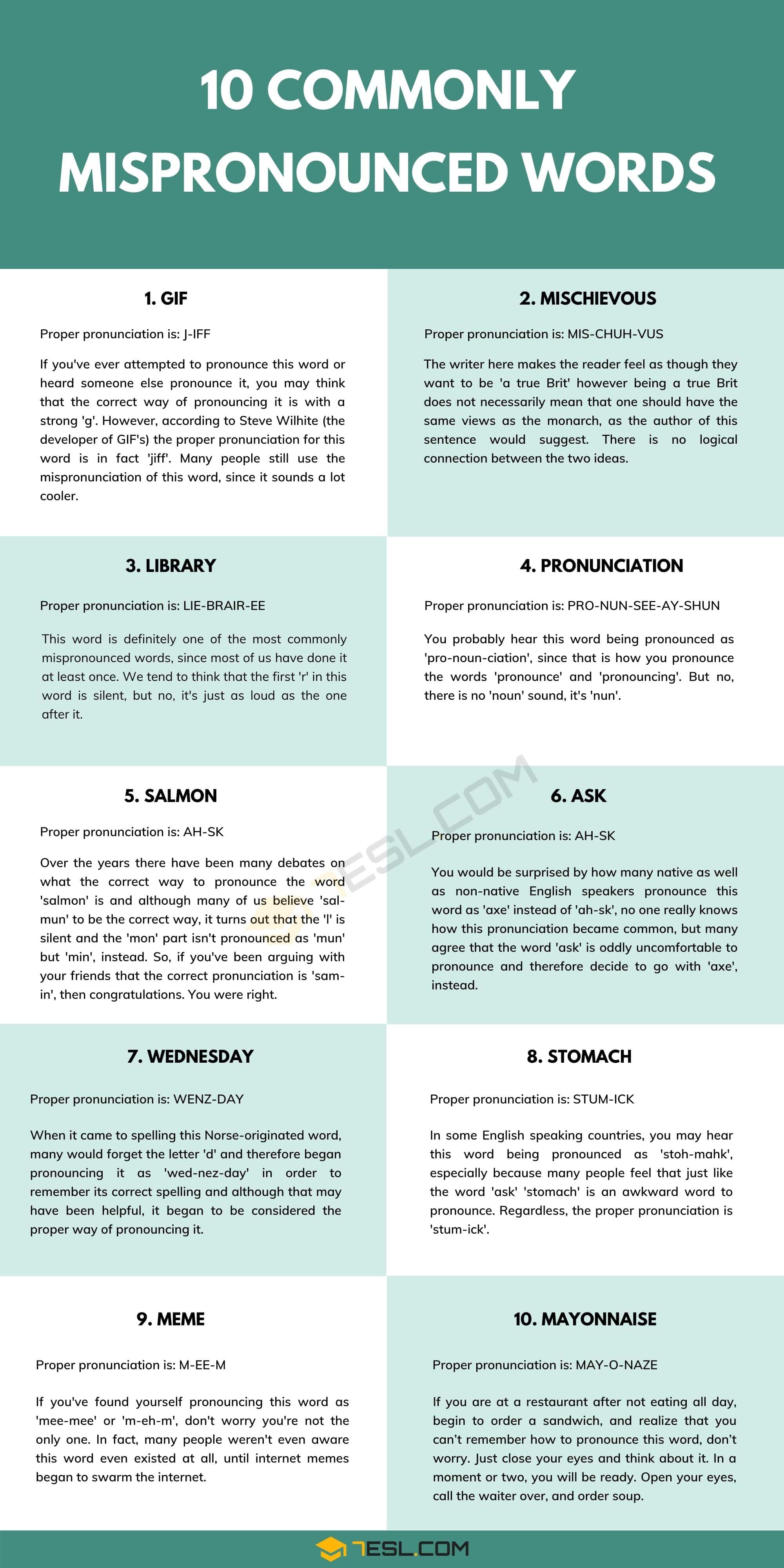 I dont think their is a proper way of saying anything “correctly” Its just based on where u live. A group of individuals in a particular region decided to say it a certain way so they did.

PLEASE add Worcestershire sauce to this list (I’ve been told by a Brit it should be pronounced “Wer-ster sauce”, which is absolutely wild. What did they do with all the other letters??? Seriously.) Also, interest (and consequently, Pinterest). Unless I’m referring to interest rates, which I pronounce “en-trest”, I typically pronounce it with three syllables “en-ter-est”, though the middle syllable is pretty soft, so it sometimes comes out as “en-te-rest”. Either way, when I recently pronounced the company name as “Pin-ter-est” my companions chuckled. They have only ever heard it pronounced “Pin-trest”. Looking online, it seems like the main difference… Read more »

in the image, it says the proper pronunciation for salmon is ah-sk can someone fix this

How about asphalt? Correctly it is a*s-fault but so often is pronounced ash-fault yet the sensible mispronunciation should be asp-halt. I’ve never heard asphyxiate (a*s-fix-ee-ate) mispronounced so why the problem with asphalt?