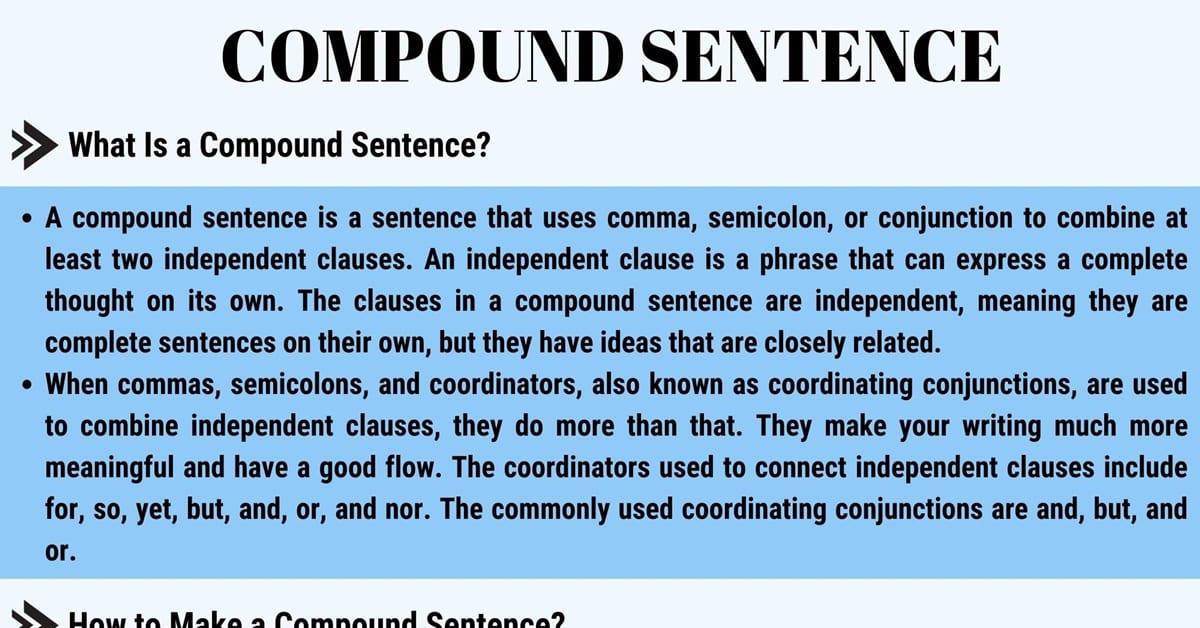 Compound sentences are designed to make writing engaging and interesting. While newbie writers are first taught how to use simple sentences, they will afterward realize that it’s only through compound sentences that they can add further information to their writing, and this is what makes the entire content more engaging. When it comes to the use of compound sentences in your writing, it’s necessary to familiarize yourself with their components and where to punctuate them. You will be linking up two or more independent clauses that have something in common.

What Is a Compound Sentence?

Let’s look at an example of how coordinating conjunctions make your writing much more meaningful.

In this example, ‘but’ is the coordinator that combines the two independent clauses which are closely related. In this scenario, the person speaking is proposing to the person being addressed that he/she can choose to entertain the guests or not. In the absence of the coordinator ‘but’, the relationship between the two isn’t evident, making the writing less meaningful and choppy.

A semicolon (;) is also used to combine the two clauses. If you use a semicolon to combine the clauses, you will introduce a sudden pause, leading to a different type of effect, as illustrated by the following example:

Semicolon should only be used whenever independent clauses have something in common, but you can contrast in a manner that you want to stand out. In the above example, the contrast is that the person being addressed in the first clause seemed realistic when she said she wanted to buy me a car, but the second clause tells us that the person being addressed was not realistic. Coordinating conjunction could have also been used to write the same sentence.

The meaning is still the same; the only difference is that the coordinator reduces the impact of the second clause.

In this sentence, “I am very talented” is the independent clause where the subject is “I” and the verb is “am,” and there is an expression of a complete thought.

“I don’t make use of my talent” is also an independent clause where the subject is “I” and the verb is “use,” and a whole idea is expressed.

Here “yet” is the coordinating conjunction, and a comma precedes it.

“He is heading to attend a seminar” is an independent clause where “He” is the subject, “is heading” is the verb. Both the two clauses express a complete thought.

“He is heading to the neighbor’s house” is the other independent clause where “He” is the subject, “is heading” is the verb, and the clause is a complete sentence on its own.

“or” is the coordinating conjunction used to combine the two clauses and is preceded by a comma.

Here “John wishes he could be literate” is an independent clause where “John” is the subject and “wishes” is the verb, and a complete idea is expressed.

“For” is the coordinating conjunction used to link up the two clauses and comes after the comma.

“Jones loves to read novels” is an independent clause where “Jones” is the subject, “loves” is the verb, and the clause expresses a complete sentence on its own.

“He is going to the library in the afternoon” is also an independent clause where “He” is the subject, “is going” is the verb, and a complete thought is expressed.

Here the coordinating conjunction “and” is used to join the two clauses and is preceded by a comma.

Compound sentences are very fundamental when it comes to writing content, as illustrated in the above-discussed examples. The great thing about compound sentences is that they allow you to add additional information to your writing to make it appealing and engaging for your readers. You need to master the usage of these sentences, and you will be in a position to add them to your content. You need to be conversant with the punctuation rules so that you don’t end up inserting them where they are supposed to be.

Also, learn to use appropriate coordinating conjunctions when joining the independent clauses together as this will ensure the exact meaning is retained. Readers are always after a detailed and informative content which can only be realized through the use of compound sentences. 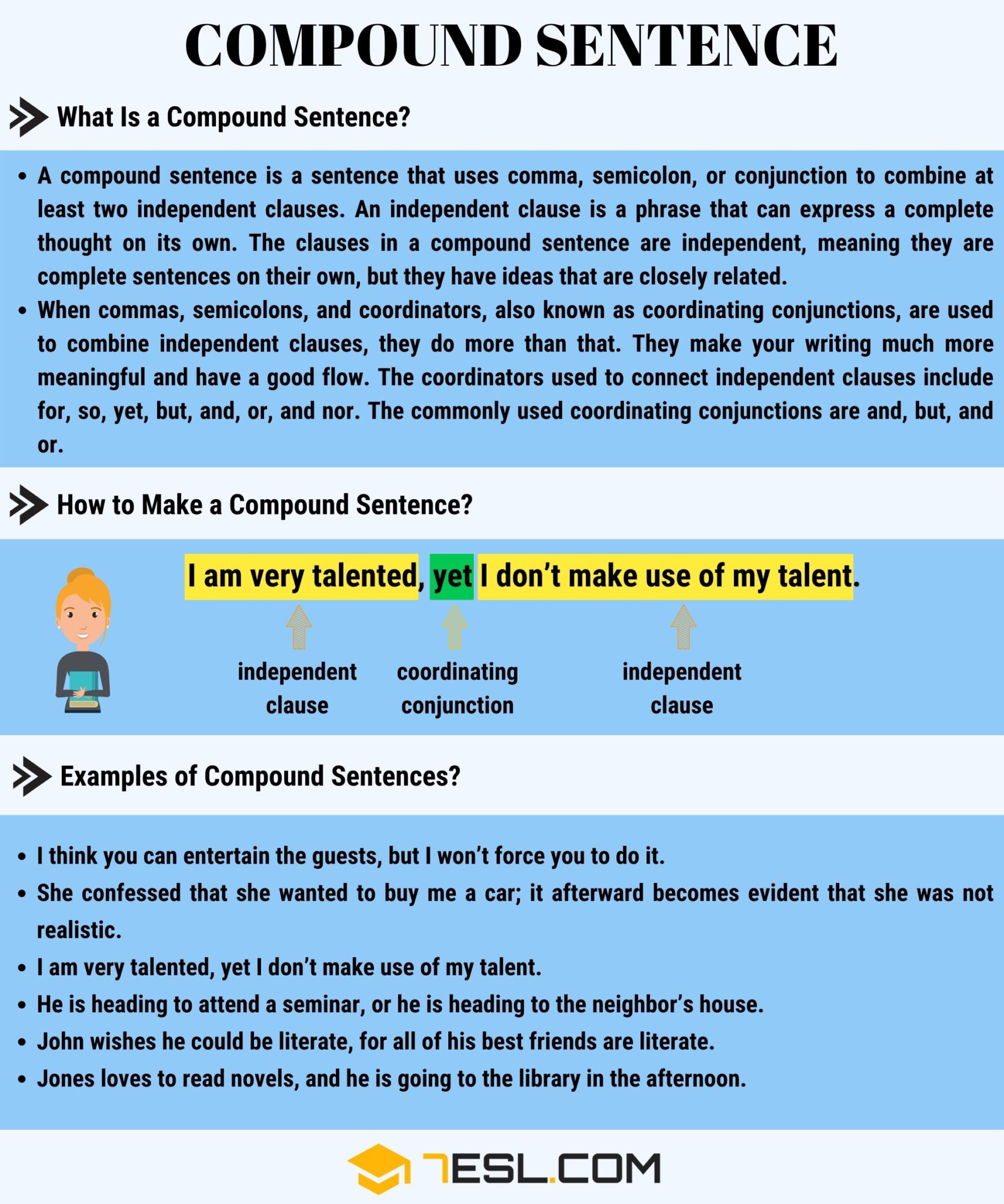 I love this channel

yes now I learned something from compound sentence 😄😄😄🤣🤣

The most detailed and complete grammar definition I can remember seeing in a long time. Excellent.

i hated everything, nah just kidding, this is great