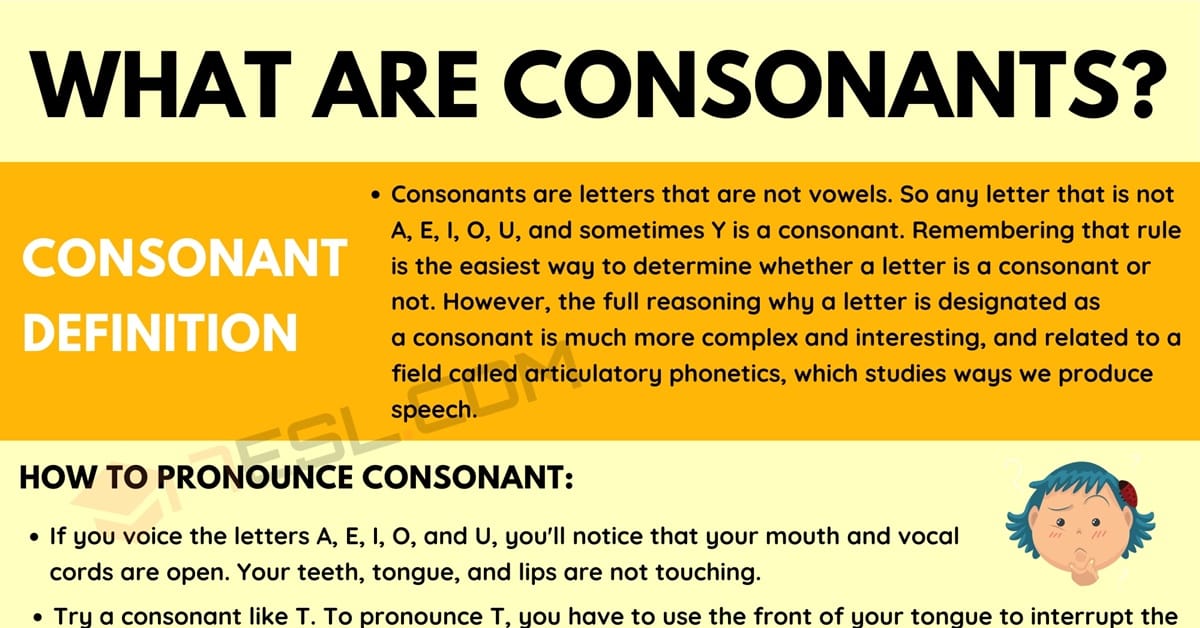 Consonant in English! What are the consonants? Here you will find the definition of consonant, how to pronounce consonants and different types of consonant sounds with useful examples.

Consonants are unique part of linguistics that are straightforward to remember, but much more complex to understand. Simply put, consonants are letters that are not vowels. So any letter that is not A, E, I, O, U, and sometimes Y is a consonant. Remembering that rule is the easiest way to determine whether a letter is a consonant or not. However, the full reasoning why a letter is designated as a consonant is much more complex and interesting, and related to a field called articulatory phonetics, which studies ways we produce speech.

Articulatory phonetics might seems like an intimidating term, but it’s a study that focus on understanding humans and how we articulate to produce speech. In short, it’s studying how we speak. Consonants are defined as speech sounds that humans create that involve airflow that is blocked partly or entirely while being produced. They can be blocked by speech organs like the vocal tract, as well as the teeth, tongue, or lips. These speech sounds are represented by letters that we know as consonants. There are twenty four speech sounds that form consonants in English. The easiest way to understand this is by trying it.

If you voice the letters A, E, I, O, and U, you’ll notice that your mouth and vocal cords are open. Your teeth, tongue, and lips are not touching. Now try a consonant like T. To pronounce T, you have to use the front of your tongue to interrupt the airflow. Try the letter K and you’ll notice the same thing, you need to use your tongue, this time the back of your tongue, to pronounce the speech sound represented by the letter K. It might be strange to define speech as air flowing through your vocal cords, but that’s exactly what it is. Introducing barriers like the tongue to alter the airflow changes the sound of your speech and thus creates consonants.

A common question in linguistics is when the letter Y is a vowel and when it is a consonant. Understanding the difference depends on this differentiation between open airflow and blocked airflow. In general, Y is considered a vowel when there are no other vowels in the word, like in “by.” Similarly, when Y is in the middle of a word or the last letter in a word of syllable, it is a vowel, like in “happy” or “recycle.” In these cases, when pronounced, the Y creates airflow in the same way as a vowel. There is no interruption or blockage or air. When Y is a consonant, however, there is a blockage. This usually happens when Y is the first letter of a word or a syllable, like in the words “year” and “lawyer.”

Rather than create additional consonants to represent every single sound, which would results in countless additional letters, linguistics have come up with other ways to represent these sounds. While in English we might recognize these sounds as pairs of consonants, linguists sometimes use symbols created specifically for each sound. This is called the International Phonetic Alphabet, which assigns unique symbols to speech sounds. This is very useful to help clarify the subtle nuances of speech, like in the example of “then” and “think.” For the average person, however, it’s far more complicated to remember so many symbols. We are left to learn and memorize pronunciation through practice. For the larger field of linguistics, the International Phonetic Alphabet is very useful to properly communicate and learn across languages and cultures.

In terms of articulatory phonetics, there are actually many more speech sounds than there are consonants. We encounter these in our daily lives as pairs of consonants. These are called consonate digraphs, two successive consonants that form a single sounds. On their own, each consonant makes a different sound, but together, they make a specific speech sound that the two letters represent. Through school and speaking, we learn these pairs and memorize their sounds.

For example, when written together, the pair TH does not make a sound like a T or an H, but rather makes a sound like in the word “then.” This gets even more complicated because the pronunciation of consonant pairs changes depending on the word it’s used in. “Then,” for example, has a softer, shorter TH than in the word “think,” which is a harder, more definitive sound. English does not differentiate these subtleties with additional pairs or symbols, as it would be far too complex. Instead, we just have to learn to pronounce the sounds as we learn to master the language.

Consonant digraphs shouldn’t be confused with words that contain multiple, successive consonants. Take the word “sparse,” for example. In this word, there are two points in which we have two consonants in succession. These are each pronounced and blended together, but they do not form an entirely new speech sound. Rather, they are what we call consonant blends or consonant clusters. These retain the speech sounds of the individual consonants.

English also has special cases in which the consonant is not pronounced at all. These are called silent consonants. These often occur when there are two or more consonants together. In some cases, these form hard and fast rules like when a word has the letter K before the letter N. In this situation, the English language teaches is that the K is silent, like in the word “knight” or “knowledge.” There are a few other pairs that form silent consonants, like B before T, as in the word “subtle,” and P before T, as in “receipt.” The same applies for words with P before N or S, like in “pneumonia,” and “psychic.” Similarly, when a word contains two of the same consonant in succession, we do not pronounce both letters. For example, in the word “happy,” we pronounce only one P.

In addition to silent consonants, there are also unique situations in which consonants break up a word. These are often referred to as stop consonants. They are also known as oral occlusives or more informally, a “plosive.” This last term refers to the fact that in a word, “plosive” contains a stop consonant in the letter P followed by L, which bisects the word and causes airflow to stop completely, as in “explosive.”

While we might not think of consonants are more than one letter together, the word consonant actually derives from the Latin stem that means “sound together.” Remembering these facts can help to understand what exactly a consonant is. When all else fails, just remember that consonants are all letters that are not vowels. 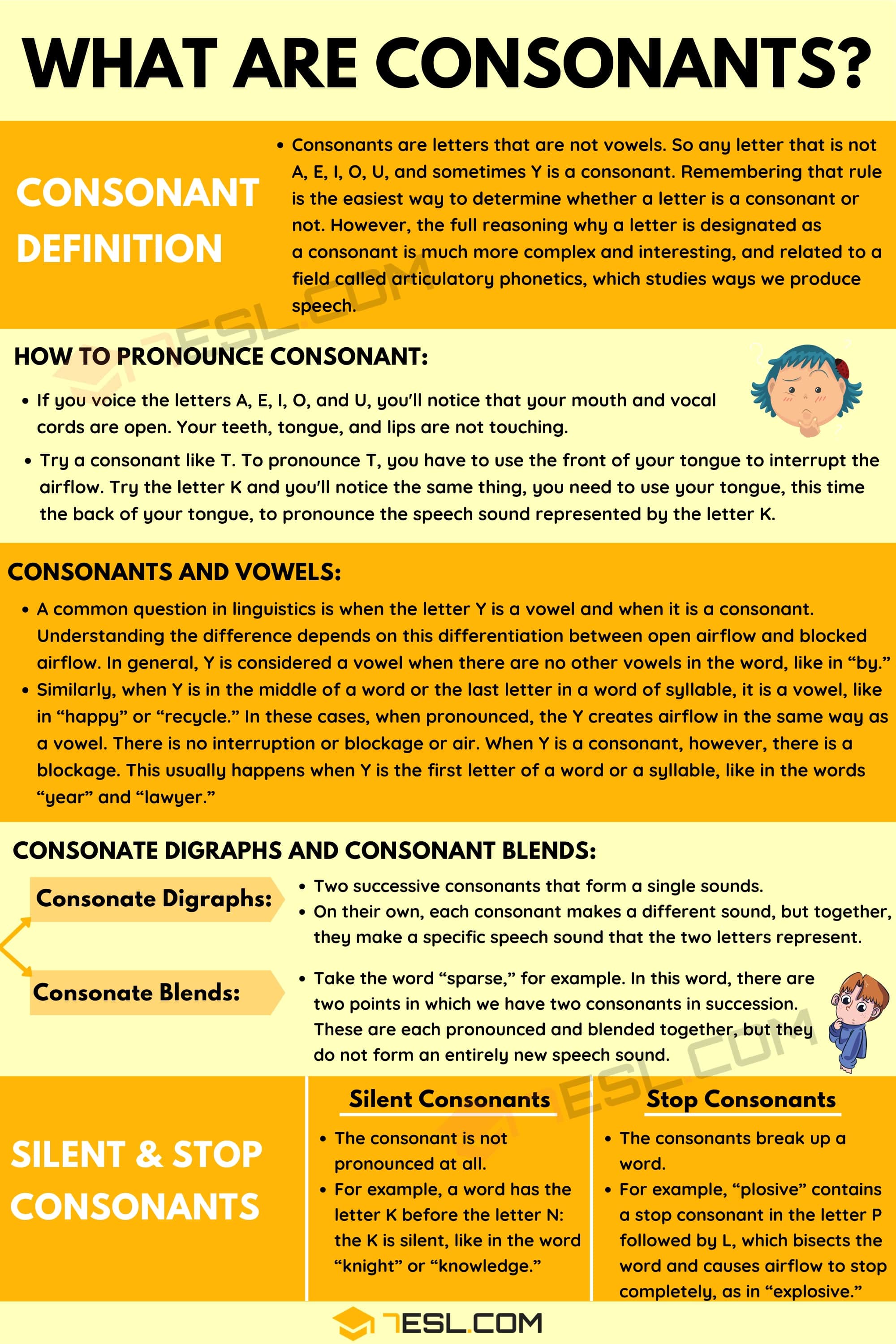