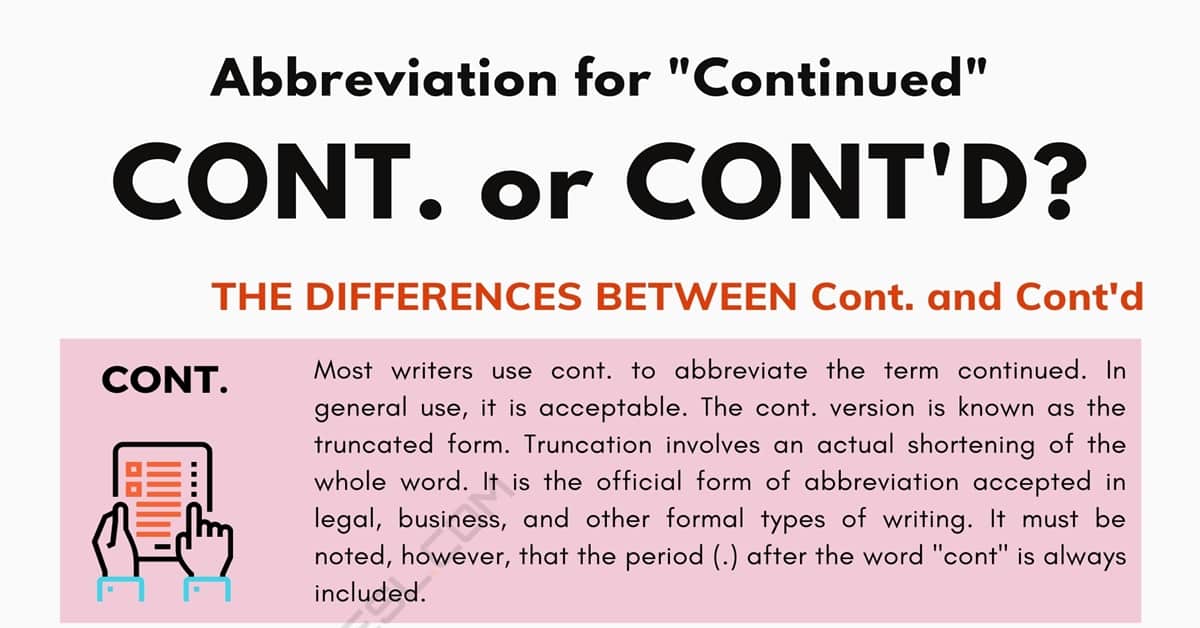 What is the correct abbreviation for continued? Abbreviations are shortened versions of a word or phrase that helps in attaining a more concise text. They aim to uphold brevity to save time, effort, and space. Generally, abbreviations are considered informal. However, you may see them being used in academic writing. In informal writing, writers abbreviate words to make writing faster. Often times, it is used to shorten long and complex sentences for easy reading.

Some abbreviations may not be familiar to the readers. So, you’d have to spell it out first and introduce the shortened form inside a parenthesis beside the whole term. Another thing to note is the proper spelling of an abbreviation. Yes, even the shortened form has to be written correctly. That being said, this article shall focus on the word continued that apparently has two probable abbreviations: cont. and cont’d.

Differences between Cont. and Cont’d

Most writers use cont. to abbreviate the term continued. In general use, it is acceptable. The cont. version is known as the truncated form. Truncation involves an actual shortening of the whole word. It is the official form of abbreviation accepted in legal, business, and other formal types of writing. It must be noted, however, that the period (.) after the word “cont” is always included.

Cont’d is another way to write continued in a contracted form. Contraction involves the omission of some middle letters of a word and substituting them with an apostrophe. The cont’d version is also correct, but it is not commonly used in formal or business writing. Instead, it is more preferred in screenplays and journalistic writing. In magazines and newspapers, writers tend to save space so that all information will fit on a page. Therefore, labels and indications are usually abbreviated.

Cont. is often seen at the bottom of a page as an indication that the text continues onto the next page or a specific page written. It is usually used in industrial or business documents that have multiple written text.

An example of a material where these contracted forms are often used is in a screenplay. In this field, the word cont’d is a determiner for the actor that his character continues to speak after a pause. It is often placed at the top of the page or beside the name of the actor. This is done to manage scenes that extend to multiple pages. It can be written either in upper case or lower case.

I have to save my friends.

(He struggles to stand while having that determined face.)

I will defeat you for their sake!

Also, cont’d is the abbreviation that is usually used in magazines and newspapers to direct readers from one page to another for story completion. At the end part of an incomplete article, you can see cont’d on page 2, for example. This shall bring you to the continuation of the article found on page 2. However, the complete spelling of the word continued is also often used.

Abbreviation for Continued – Cont. or Cont’d?Infographic