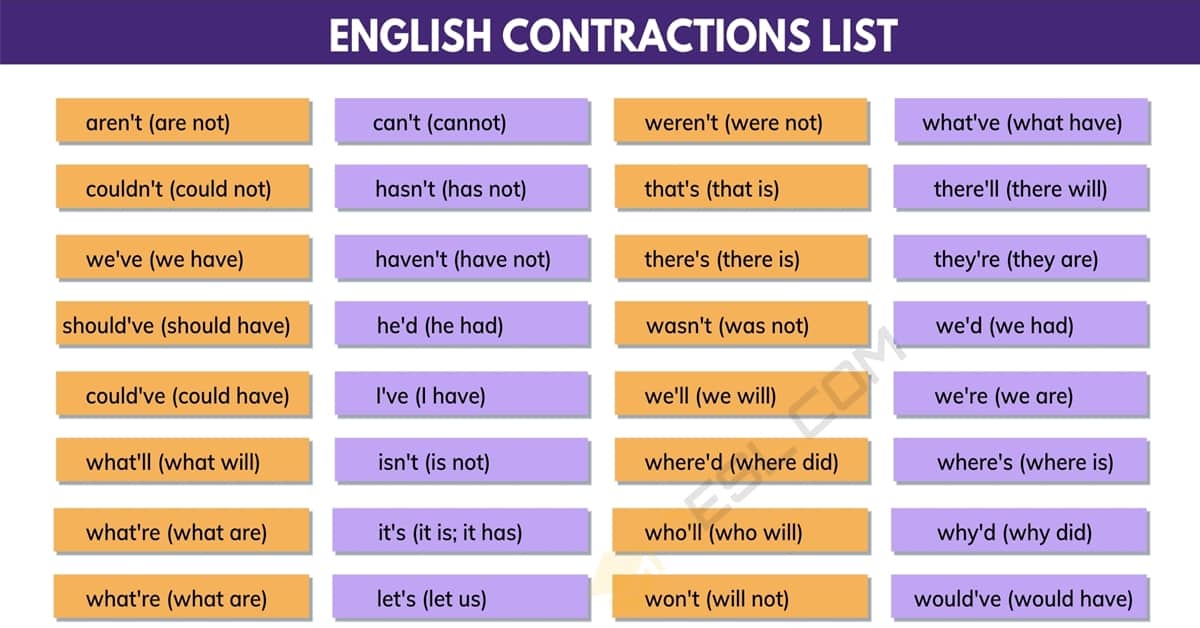 In English grammar, we use contractions to shorten words or phrases. A contraction reduces word or phrase size by removing letters. An apostrophe appears in written text to denote the missing letters. In this article, we’re going to look at the definition, types, and list of contractions in English Grammar.

What Are Contractions in English Grammar?

We find contractions in our day to day lives. Informal writings and casual speech present contractions regularly. Verbs usually play a central part in any contraction. An example of a contraction is can’t. It’s the shortened form of the word cannot. This contraction features missing letters and an apostrophe.

Why Do We Use Contractions?

Every day we talk to people and use contractions. Contractions shorten our speaking time. The shorter words help people to get to the heart of the matter faster.

Grammar mistakes develop from hearing contractions mispronounced. For example, the contraction would’ve when spoken fast sounds like the words would of. It can create confusion for new English language students. These students mistakenly believe that the words “would of” form the contraction “would’ve”.

When to Use Contractions

Some writers believe that contractions do not belong in any written text. These people fail to understand that contraction use influences tone. Informal writing relies on contractions to create a more inviting tone of voice. In contrast, a formal piece of writing demands an authoritative tone.

The tone of voice you wish to engrain into your text speaks volumes. Is your audience friendly? Is it solemn? Who you are trying to communicate with is important. Before writing anything with contractions, think of the intended audience.

Instead, contracted pronouns appear more often in writing. I’ll, he’d or he’s are examples of pronoun contractions. Pronouns merge with words like “is” or “has”.

Contractions can be negative. To negate the verb in a sentence you use the word “not.” The same is true for contractions.

We can employ a collection of helping verbs to help form “not” contractions. These verbs fall under two categories: modal and auxiliary. The former verb group adds meaning to a clause. These words express emphasis and verb tense.

Many of the modal verbs combine with the word “not” to produce a contraction. Modals complete particular jobs to modify the action the main verb conceives. The verb tense does not change for modals when forming “not” contractions.

Examples of contractions using “not”

In the above sentences, we use helping verbs to build the contractions. We join both types of helping verbs with “n’t” to make the contraction work. In the first sentence, we squished “can” and “n’t” together to get “can’t”. The rest of the examples follow the same procedure.

Sometimes you will come across an ambiguous contraction when reading. These contractions can be confusing without the proper context. With no context, it would be impossible to tell if “he’d” referenced the phrase “he would” or “he had”. Ambiguous contractions usually end with the letters “s” and “d.”

When people speak casually they shorten their words. Sometimes people mistake these types of words for slang. In laid-back settings, we often hear people throwing around words like “gonna.” This word developed from people pronouncing “going to” super fast.

When people speak fast “going to” sounds like “gonna.” This is an informal contraction that is more common in spoken language. The only time these words appear in print is as dialogue. In any other written context, these words would be wrong. Including this terminology in a formal paper would result in a lower mark.

Informal contractions may appear without an apostrophe. These contractions are more prevalent in the United States of America.

We consider these words informal contractions: gonna (going to), ain’t (am not), gimme (give me), kinda (kind of), gotta (got to), whatcha (what are you), lemme (let me), and wanna (want to).

How to use in dialogue sentences

In the first sentence “whatcha” and “gonna” work together to form a question. The question asks “what are you going to do?” The above example serves as a sped-up version of the question. The second sentence uses “kinda” instead of “kind of.” Both sentences are incorrect when not referencing speech patterns.

Can we use “There’re” as a contraction?

So, a contraction is basically joining a word to make it shorter