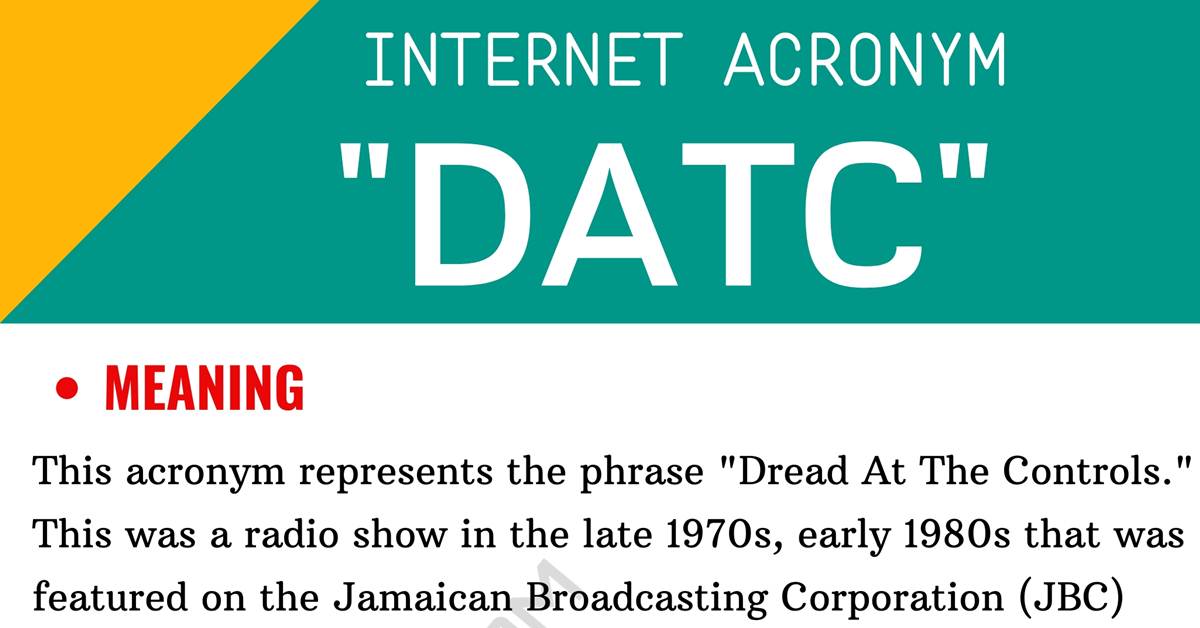 The acronym “DATC” may be one you see used on the internet or in other types of conversation if someone is speaking nostalgically. Chances are you have encountered this phrase and wondering what it meant led you here. Fortunately, this has put you in the right place. Here you will not only find the meaning of this acronym, but you will also find optional definitions of this term and information about its origin, Additionally, you will see some example conversations to help you better understand this term by seeing it used in context and you will discover some synonyms for the phrase this acronym represents if there are any.

What Does DATC Mean?

This acronym represents the phrase “Dread At The Controls”. This was a radio show in the late 1970s, early 1980s that was featured on the Jamaican Broadcasting Corporation (JBC) featuring a man named Michael George Campbell, better known to fans as Mikey Dread.

The radio show that this acronym represents debuted in the late 1970s. Dread began working for the JBC shortly after graduating college and was disgruntled with the lack of reggae the stations were playing. He convinced management to give him his own radio show which he hosted for a couple of years and played mostly reggae music. In 1978, Dread quit hosting the show as a form of protest after becoming angry with management. His career continued to evolve and he produced his own music in addition to helping and touring with many other well-known artists up until his death in 2008.

There are a few other things that this acronym can represent. Some of these other representations are “Diplomacy Adjudicator Test Cases,” “Digital Audio Time Code,” “Design Automation Technical Committee,” Dincannon Appalachian Trail Community,” and “Datatec Systems, Inc.”

There are no synonyms that would be acceptable to replace the title that this acronym represents because it is the official title of a popular radio program. Therefore, changing the title in any way would be changing the meaning making it no longer identifiable and associated with this acronym.