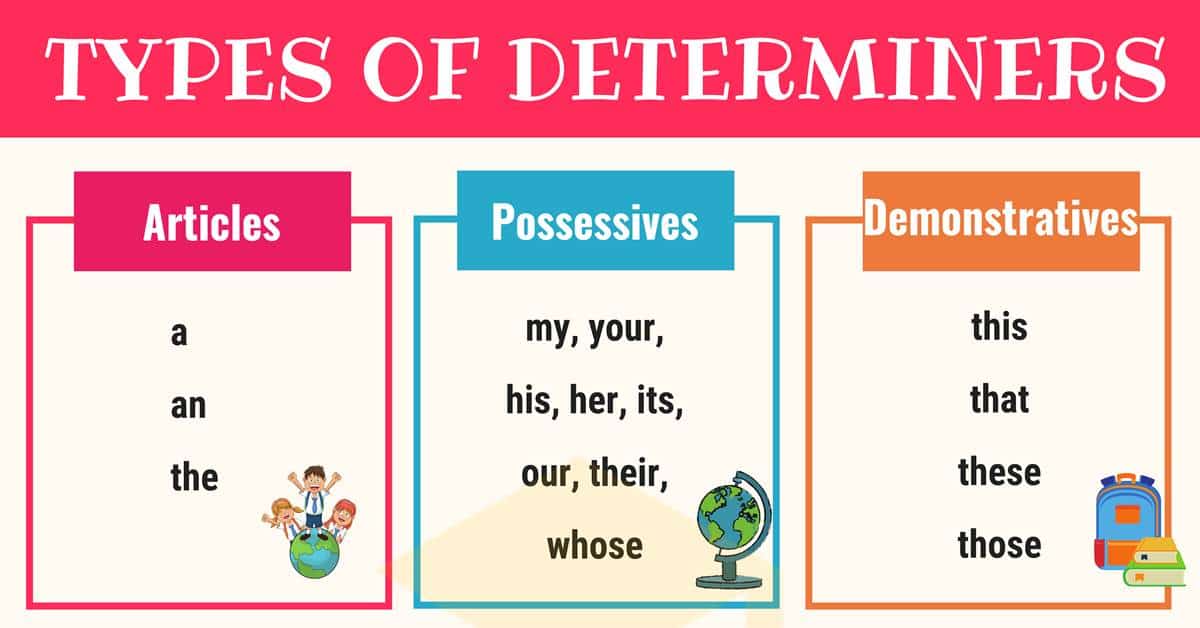 A determiner is a word which is used to introduce a noun or a noun phrase. You will come across these very often when studying the English language and it is very important that you are aware of how to incorporate them into your own speech.

In this section, we will be looking at the different determiner types such as articles, demonstratives and possessives and how they can be used. This will help you in selecting the correct determiner for the noun in any given conversation.

What Is a Determiner?

What is a determiner? Learn different types of determiners in English with meaning, list and example sentences.

An important role in English grammar is played by determiners – words or phrases that precede a noun or noun phrase and serve to express its reference in the context / to give more information about the noun.

The most common of these are the definite and indefinite articles, the and a, an. Other determiners in English include demonstratives such as this and that, possessives such as my and the boy’s, and quantifiers such as all, many and three.

The following is a rough classification of determiners used in English, including both words and phrases: 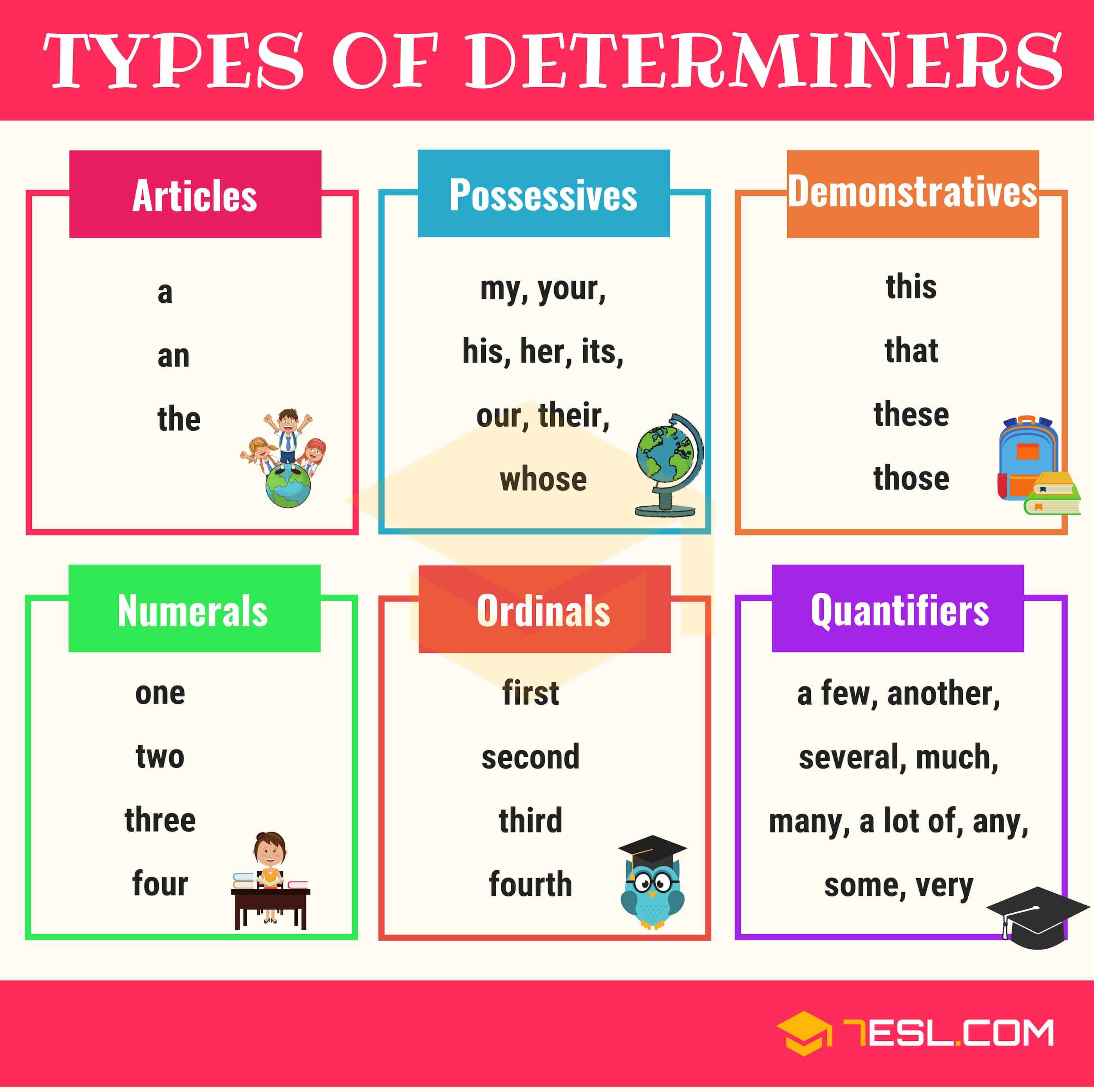 What Is a Determiner? 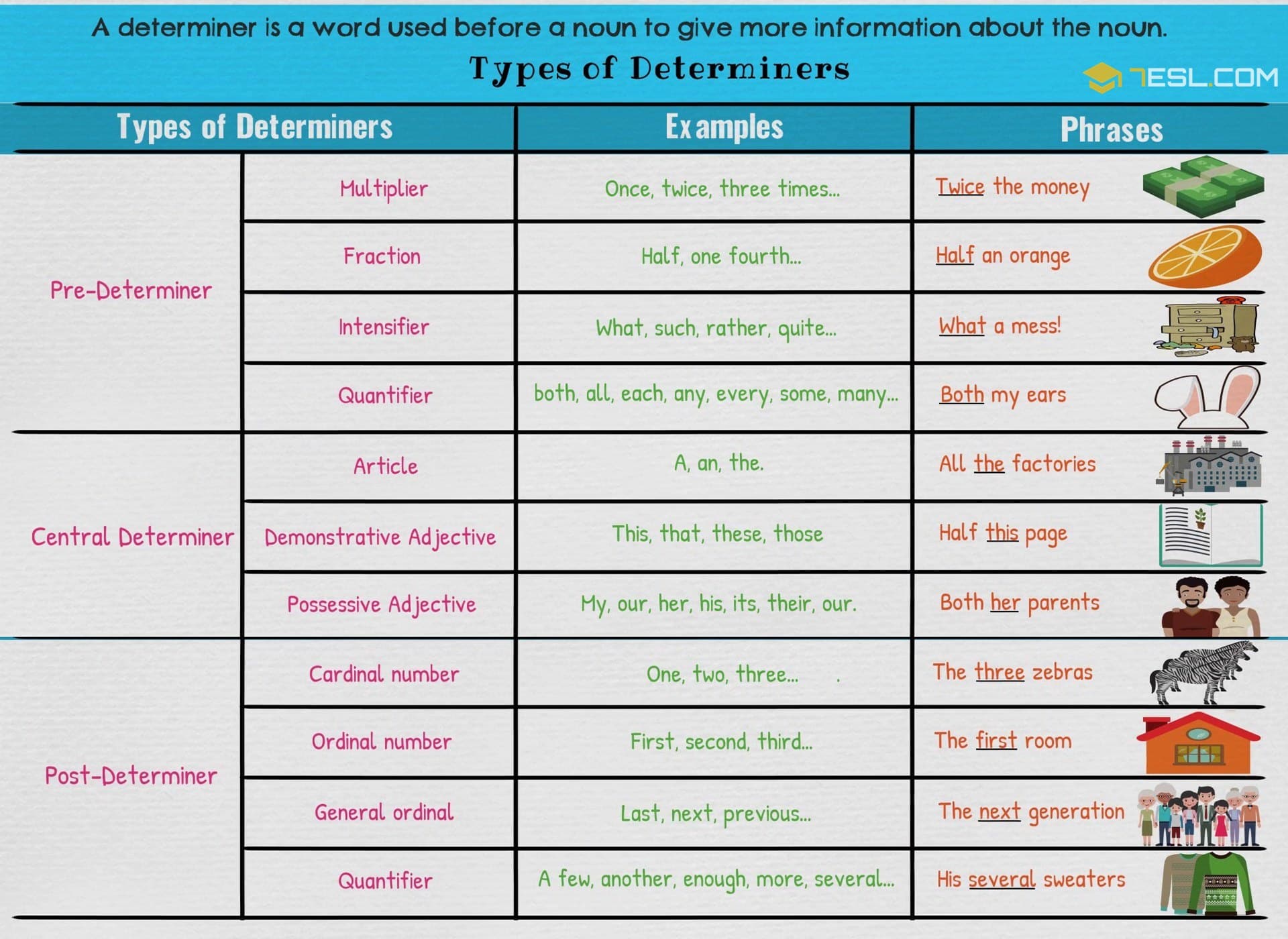 Which imply that the referent of the resulting noun phrase is defined specifically:

1. The definite article the.

Example: The girl, all the factories, the red wine

Examples: this, that, these, those

Examples: which, what (these can be followed by -ever for emphasis).

5. Relative determiners: which, whichever and whatever…

Example: Whichever way you look at it, things are pretty bad.

Example: a or an

Used as an equivalent of the indefinite article with plural and non-count nouns.

3. The strong form of some

Example: Some people pretend to despise the things they cannot have.

Often used in negative and interrogative contexts in place of the article -equivalent some (and sometimes also with singular count nouns). It can also be used to express alternative.

1. Words indicating a large or small quantity and their comparative and superlative forms

2. Phrases expressing similar meanings to the above.

Examples: a lot of, lots of, plenty of, a great deal of, tons of, etc.

3. Words and phrases expressing some unspecified or probably quite small amount

Examples: a few/a little (learners often confuse these with few/little), several, a couple of, a bit of, a number of, etc.

Examples: zero (quite rare as determiner), one, two, etc.

Examples: a pair of, five liters of, etc.

Examples: half, half of, double, twice, three times, twice as much, etc.

Examples: all, both, enough, sufficient, no.

Note that many of these quantifiers can be modified by adverbs and adverbial phrases such as almost, over, more than, less than, when the meaning is appropriate.

The words you and we/us, in phrases like we teachers; you guys can be analysed as determiners.

These examples can be contrasted with a similar but different use of pronouns in an appositional construction, where the use of other pronouns is also permitted but the pronouns cannot be preceded by the (pre-) determiner “all”.

1. The words such and exclamative what

These are followed by an indefinite article when used with a singular noun.

Example: This color and what size (as in I don’t like the color furniture; What size shirt does he wear?)

In some contexts a complete noun phrase can exist without any determiner (or with “zero determiner”). The main types of such cases are:

1. With plural or uncountable nouns used to refer to a concept or members of a class generally

2. With plural or uncountable nouns used to refer to some unspecified amount of something

3. With many proper names

4. With singular common nouns in some common expressions

My this book is costly.

My this book is costly. Is this statement correct

I think that is an expression with an interjection. If the complete thought were written out, it would be “Oh my! This book is costly.”

“only 1 central determiner allowed”.
For example : “My” book or “This” book

This book of mine is costly. = My this book is costly.

I dont think these answers are correct