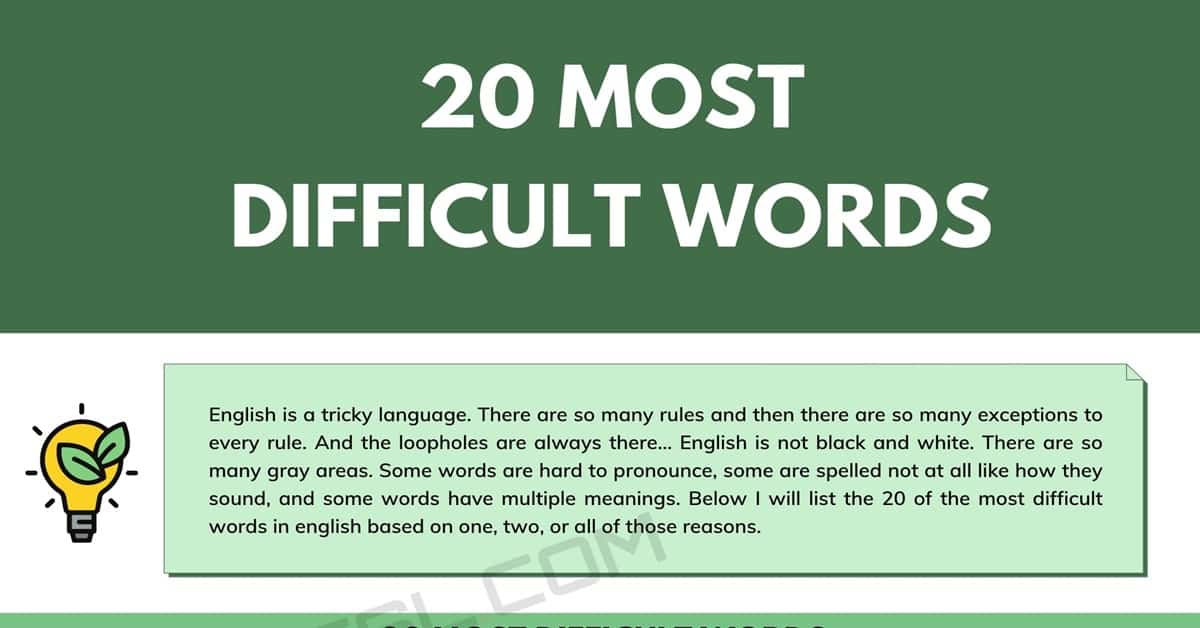 Anemone is pronounced uh-nem-uh-nee. As you can see, that is not how it is smelled. This also isn’t a common word, so you may not know what it means. It comes from the Greek word “wildflower.”

This is one of the longest words in the English language. It has 28 letters and 13 syllables. It is also a tongue twister… I’m not sure I can even pronounce it properly.

Unlike January, February has an r before the u, which gets caught in a lot of people’s tongues. A lot of people pronounce Feb-roo-er-ee like Febuary.

The longest word in English. It is 29 words and 12 syllables. It means seeing something as worthless… funny because that word seems to have a lot of worth in the length.

Saying this word and spelling this word is a tricky one. Onomatopoeia is when you make a sound relating to something like buzz, hiss, splash.

Left isn’t hard to say or to spell, however, it has multiple meanings which makes it tricky for people trying to learn English. Left can mean the left side of your body, or that you left something at someone’s house or that you are politically left (liberal). This can easily confuse a non-native English speaker.

Like left, park is not hard to say, but has multiple meanings. You can park your car in the driveway or go to the park and watch the sunset. This can confuse people who have only learned one meaning of the word and then it can be taken out of context.

This word sounds the exact same as morning but is spelled slightly different and has an entirely different meaning. For a non-native English speaker, this is extremely confusing because it sounds like one thing but means another. Morning relates to the time of day, whereas mourning, means deep sorrow for someone who has died.

Amateur is one of the most misspelled words in the English language because the ending is french. Most English words end in -er, like harder, colder, freezer, meaner, but amateur has the u. This is an exception to a basic English rule.

You would think collectible is spelled collectable, but it is just one of those -ible words that must be memorized.

Rhyme seems like it should be spelled rime and it used to be, but in the 1600’s it was changed to be more like rhythm, which is another hard one the spell and commonly misspelled.

Another commonly misspelled word is misspelled. Isn’t that ironic and embarrassing? Mis-spell is an easy way to remember the proper spelling.

It is very common to forget the f when spelling twelfth. Most people even pronounce it without the “F” sound.

Specificities is extremely hard to say for people with a lisp. All of the s’s and c’s make it almost impossible for anyone with a speech impediment.

Pronounced Keen-wah, this is a yummy seed. You just have to know its a q instead of a k. One of those words without any type of reason.

The r before the e throws a lot of people off. Usually, words have an er ending… and it is pronounced like many other -er ending words.

This is a fun and different word to say, spell, and use in general. Bunc is pronounced – bunk, a soft c sound.

There are so many hard words in English. To choose only 20 was a challenge because words are difficult for many reasons.

20 Most Difficult Words in English with Image