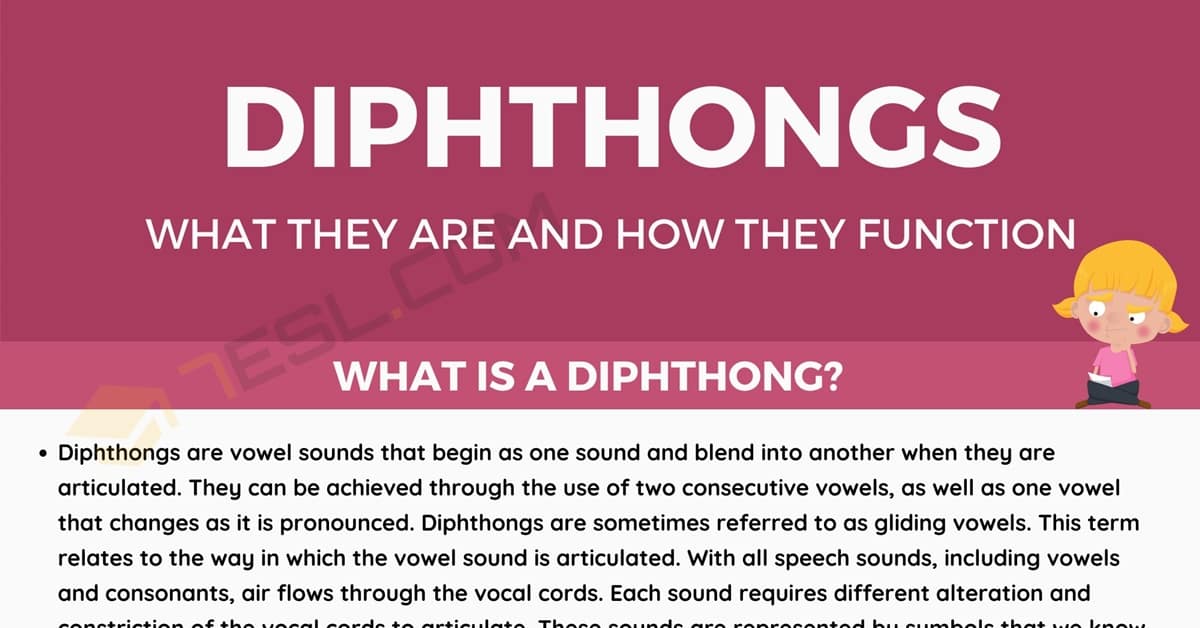 Diphthong in English! When we speak, the way in which we pronounce words is determined by the letters of each word. These letters are symbols that represent speech sounds. In studying speech and how each letter is articulated, linguists often refer to things called diphthongs. Studying and classifying diphthongs helps to communicate how words are articulated and even shows how accents within the same language vary.

What Is A Diphthong?

Diphthongs are vowel sounds that begin as one sound and blend into another when they are articulated. They can be achieved through the use of two consecutive vowels, as well as one vowel that changes as it is pronounced. Diphthongs are sometimes referred to as gliding vowels. This term relates to the way in which the vowel sound is articulated. With all speech sounds, including vowels and consonants, air flows through the vocal cords. Each sound requires different alteration and constriction of the vocal cords to articulate. These sounds are represented by symbols that we know of as letters.

When air flows through vocal cords, it is manipulated by the lips, teeth, tongue, and the vocal cords themselves in order to produce the desired speech sound. A vowel becomes a diphthong when it starts as one speech sound and ends as another. The term gliding vowel is a reference to the way in which the airflow glides or moves from one vowel sound articulation to another.

Having two consecutive vowels does not guarantee that a word has a diphthong. In the words “loot,” “bear,” “and “fear,” for example, only one vowel sound is articulated. Another thing to note is that diphthongs depend upon pronunciation. In some accents, a word may have a diphthong even though in another accent it does not. The New Yorker accent, for example, tends to add extra diphthongs to words like “dog” and “long,” where the single O vowel is pronounced as a diphthong similar to the word “aw.”

There are eight diphthongs that are generally agreed upon.

Diphthongs can also be referred to as narrow or wide. Narrow ones are comprised of vowel sounds that are similar sounding and similarly pronounced. Examples include “rain” and “weight.” Wide diphthongs are vowel sounds with more drastically different articulations like in “brown,” “found,” and “now.”

Linguists also classify diphthongs based on their lengths, which are measured in a term called morae. This refers to the length when pronounced and can be short or long in the same way that vowels can.

Understanding the nuances of diphthongs takes time and is often subject to debate. Pronunciation is flexible and varies depending on each person’s accent. What is certain is that the study of diphthongs and language in general can help to communicate in that it documents just how we articulate each word.