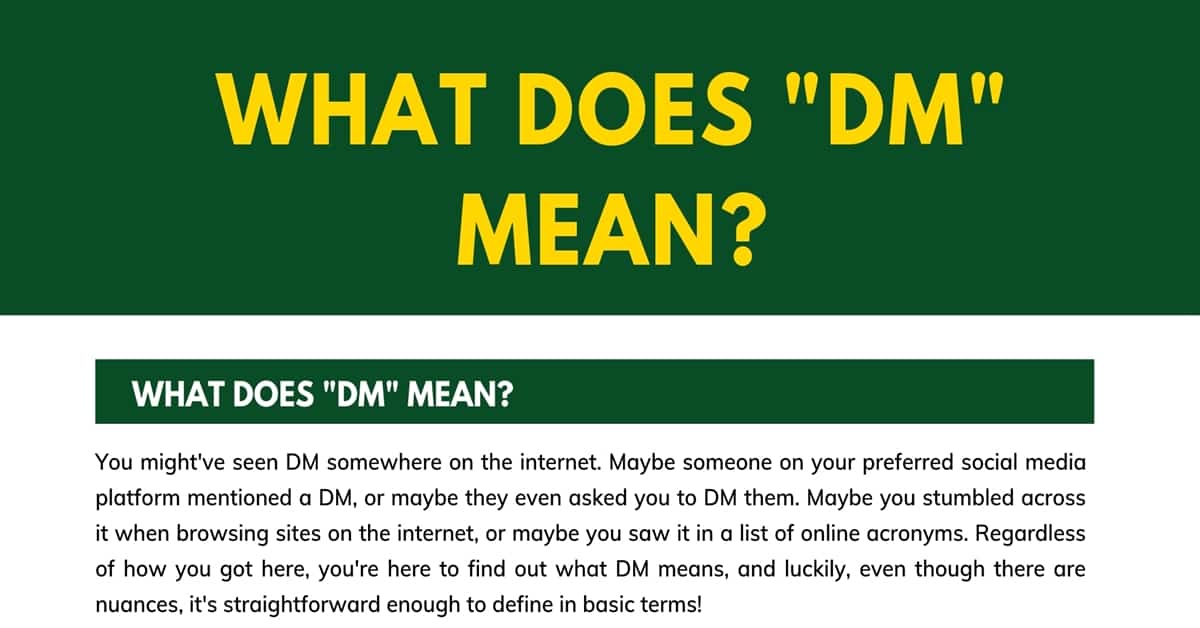 What does “DM” mean? English can be pretty tricky on its own, but adding slang into the mix makes things even more challenging. As if that weren’t enough, there’s a type of slang that exists almost exclusively on (or when referring to) the internet. Luckily, we’re here to help! On this page, we’re talking about what DM means.

What Does “DM” Mean?

You might’ve seen DM somewhere on the internet. Maybe someone on your preferred social media platform mentioned a DM, or maybe they even asked you to DM them. Maybe you stumbled across it when browsing sites on the internet, or maybe you saw it in a list of online acronyms. Regardless of how you got here, you’re here to find out what DM means, and luckily, even though there are nuances, it’s straightforward enough to define in basic terms!

DM is an acronym used mostly online, and it’s short for “direct message.”

This means messaging someone privately, where, presumably, just the two people involved are able to see the conversation. DM can be used as either a noun or a verb.

You can use DM when you’re asking somebody to take a public conversation to an online, private setting.

Online messaging systems have been around for some time, and public places to communicate via text, such as chat rooms or forums, have been around for a long time, too. The more tied into social media people became, the more it became the norm to ask for permission or wait for an invitation before messaging someone directly. This isn’t a hard and fast statement and doesn’t always apply, but it’s common enough that people needed a quick and easy way to communicate this without dancing around it publicly.

There are a few variations, which we’ll discuss below, but by far the most common shorthand or acronym for messaging someone privately is DM, and it accomplishes its purpose well as long as everybody is aware of what it means.

Other Meanings for and Nuances of “DM”

While it’s a very straightforward meaning on the surface, DM does come with some implications that it’s good to be aware of. Because it’s so intentionally private, people requesting to DM might be asking to exchange personal information or might be feeling out romantic or sexual interest.

You also might see DM used in an offline, gaming context. In this case, it’s referring to “Dungeon Master”, or the person who leads a roleplaying game.

Many people on the internet use DM. It’s particularly common for sites like Facebook and Twitter. Verbal references are frequent in those who spend a lot of time on those types of sites. You also might hear it in TikTok and Youtube videos.

The following are some examples of how DM can be used.

For a little while, IM was used, short for Instant Messaging. However, with web-based messaging and app-based messaging both becoming more popular, there was a need to distinguish between the two, and IM was used for external messaging apps, so IM is less likely to be recognized by younger people as an alternative.

Another acronym people still sometimes use is PM, for Private Message. This means the same thing as DM, but it’s not as common and doesn’t carry all the same connotations.

You can also use phrases without acronyms, such as, “Can you message me?” or “Can I message you?”

What Does DM Stand for? | Infographic