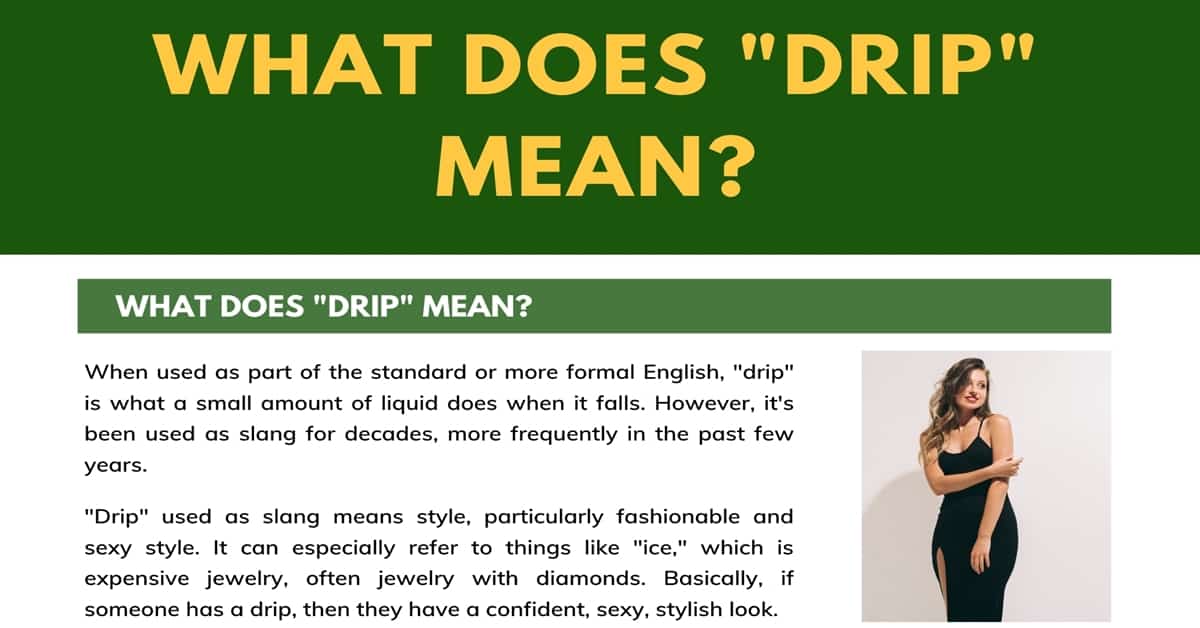 What does drip mean? English can be a tricky language, but we can figure out most of it through learning the rules and practicing. Slang, idioms, and other informal words and phrases are all a little harder since they aren’t usually official words you can just look up in the dictionary. Luckily, we’re here to help! This discussion focuses on slang usage of the word “drip.”

What Does “Drip” Mean?

When used as part of the standard or more formal English, “drip” is what a small amount of liquid does when it falls. However, it’s been used as slang for decades, more frequently in the past few years.

“Drip” used as slang means style, particularly fashionable and sexy style. It can especially refer to things like “ice,” which is expensive jewelry, often jewelry with diamonds. Basically, if someone has a drip, then they have a confident, sexy, stylish look.

The origin of “drip” as slang is actually debated, but most agree it started in the rap scene in the 2000s. There’s disagreement as to where it originated geographically, with the two most common being Atlanta and New Jersey. It was used occasionally from then until around 2018, at which point it started appearing in more and more rap and hip-hop songs, including with some of the artists who also appear on the Top 40. This brought “drip” into much wider circulation.

Other Meanings of “Drip”

Aside from the official, dictionary definition, there are a few other ways that “drip” and its variants can be used.

Who Uses “Drip” in this Context?

Anyone can use drip to mean a sexy, cool style. It does tend to be more popular among certain age groups and among fans of rap and hip-hop.

When to Use “Drip”

You can use “drip” when you feel comfortable doing so. Remember, it’s slang, so it’s not a great idea to use it in a formal setting. It’s relatively common in some groups of people, and if you’ve heard it, it’s generally quite safe to use it with the same people.

The following are some ways you might see or hear “drip” being used as slang.

If you’re in a formal setting, it’s generally a good idea to be more literal. You could say, “That person is very fashionable and wearing some nice jewelry.” Speaking this way loses some of the connotations and such, but it’s a better fit in a formal setting.

In a casual setting, if you want alternatives, you can use “swag” or “swagger,” “boss,” or you could say the person is “blinged out.” You could also stick with the relatively simple, “That person looks good!”