What is em dash (—)?  Learn how and when to use em dash (long dash) with example sentences and ESL images. The dash is one of the most important punctuation marks in the English language.

What Is an Em Dash?

An em dash (—) is what comes to mind of most people when they hear the word “dash”. It’s longer than an en dash or a hyphen and it has a variety of uses in a sentence. If you don’t want to use parentheses or colons, you can substitute them with a long dash. They are also great if you want to emphasize or clarify something. The important thing is to not overuse them: you shouldn’t put more than two em dashes in the same sentence.

When To Use an Em Dash?

An em dash is a very versatile punctuation mark and, when used correctly, it can make the sentence clearer and easier to understand. Here are its most popular uses:

An em dash instead of parentheses

If you want to put emphasis on parenthetical information, one of the things you can do is use M dashes instead. Keep in mind that the use of em dashes goes better in informal speech, so, if your writing is formal, it might be best to stick with parentheses.

When you have parentheses in the middle of the sentence, you need to use two em dashes, omitting the surrounding punctuation. For example, the following sentences have identical meanings and are both correct:

However, if you have parentheses at the end of the sentence, only one em dash is needed.

An em dash instead of a colon

To put emphasis on the conclusion of the sentence, using a long dash is a good idea. Still, remember that a colon would be more formal than an em dash, so be sure to check if em dashes match your style of writing.

An example of a long dash in place of a colon would be the following:

An em dash with appositives

An appositive is extra information that is included for clarification. The use of commas is very common to set off appositives but, if an appositive already contains commas, adding even more of them would be very confusing for the reader. A great alternative to commas, in this case, are em dashes.

An em dash with change of thought

In informal and especially in creative writing, you might want to show that you or one of your characters changes his mind about something or is interrupted in the middle of the sentence. Here, em dashes fit perfectly. This technique isn’t suitable for formal writing either because, in an essay, it will make you look unsure.

In a narrative, however, you can always say something like: 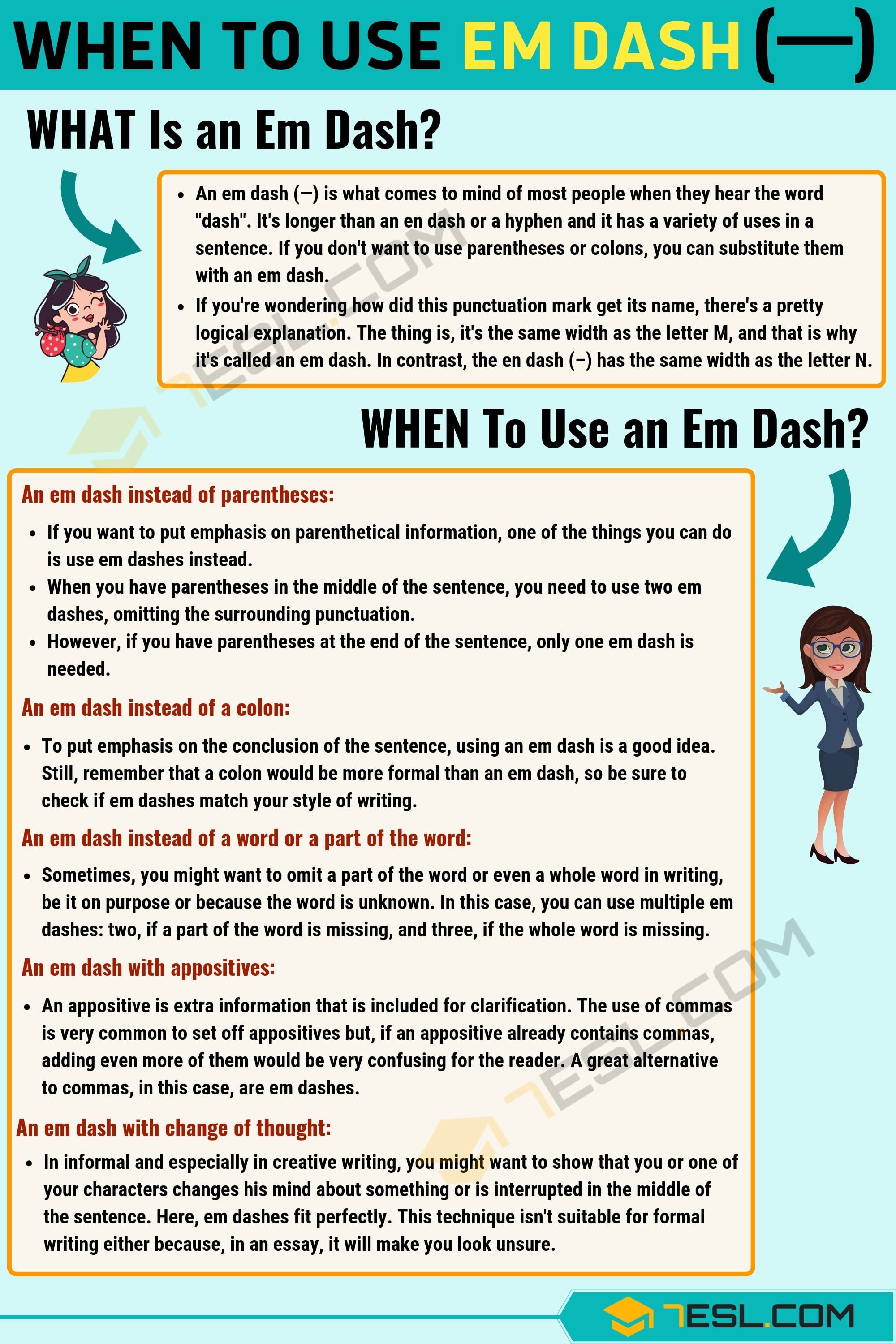 These three punctuation marks all look very similar, and yet they cannot be used interchangeably. They only differ in length on writing and it is important to go for a correct one, depending on what exactly you want to say in your sentence. But how are the hyphen and the en dash different from the em dash?

The hyphen (-) is shorter than both the em dash and the en dash. Its two main uses are for compound words and for numbers that aren’t inclusive. For instance, words, such as self-esteem, or client-centered, all need a hyphen. Similarly, social security numbers are separated by hyphens as well.

The en dash (–) is slightly longer than the hyphen but still shorter than an em dash, and it also has its own functions. Firstly, you need to use an en dash if you want to indicate a range of numbers or a span of time or distance. In these cases, it has the meaning of “through” or “to”.

For example, a teacher might assign her students to read pages 50–84 from the textbook as a part of their homework. Or, if you own a business, you could say that the 2017–2018 fiscal year was your most profitable year so far. Finally, you could say that the China–France flight is a very long one. All of these sentences require an en dash.

Secondly, you need to use an en dash if you want to show a connection between two terms. They are used for phrases that already have a hyphen, and in those instances where your modifier consists of two or more words.

Examples of this use of an en dash would be: 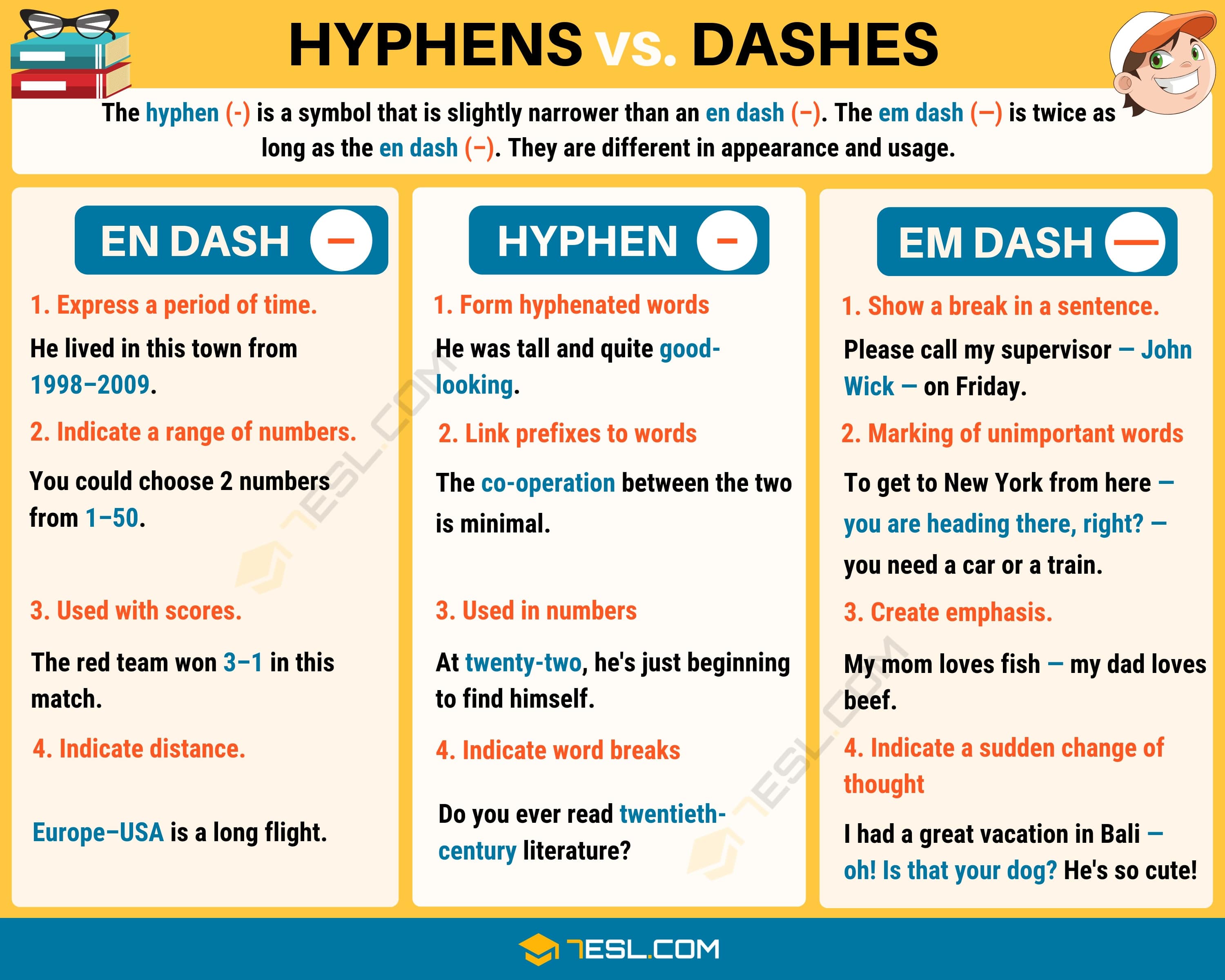