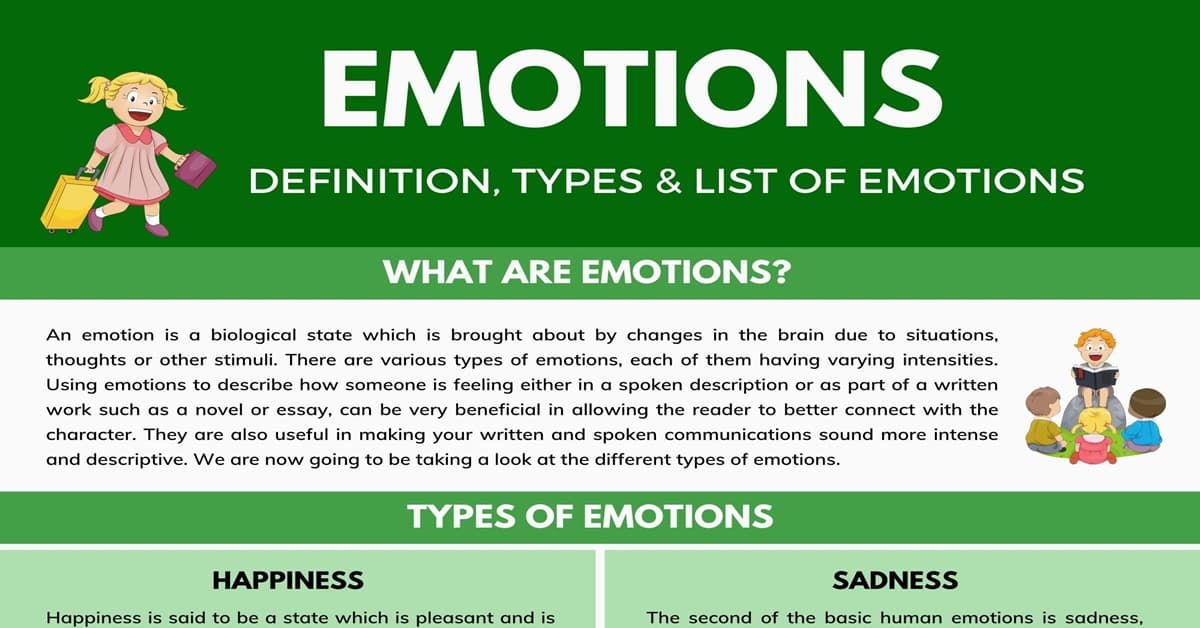 List of emotions in English! Emotions are very important when speaking or writing, they can display how someone is feeling and allow the reader or listener to feel more of a connection with a person or character. There is a huge range of emotions and it is important to be able to express as many of them as possible. In this article, we are going to be looking at exactly what an emotion is and how they can benefit our speaking and writing, as well as looking at a comprehensive list of emotions that you can use in your own spoken and written language.

An emotion is a biological state which is brought about by changes in the brain due to situations, thoughts or other stimuli. There are various types of emotions, each of them having varying intensities. Using emotions to describe how someone is feeling either in a spoken description or as part of a written work such as a novel or essay, can be very beneficial in allowing the reader to better connect with the character. They are also useful in making your written and spoken communications sound more intense and descriptive. We are now going to be taking a look at the different types of emotions. 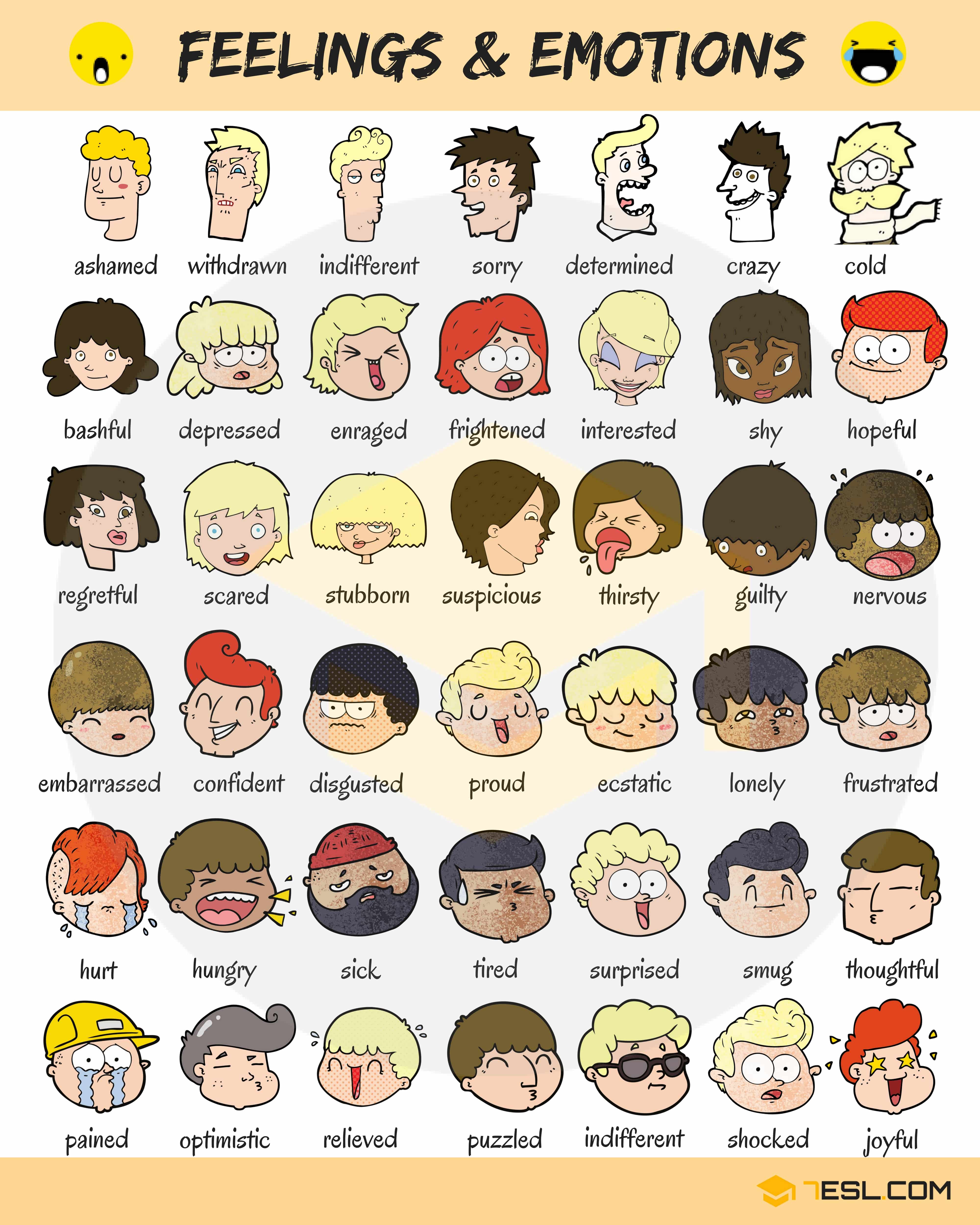 Happiness is seen to be one of the most basic human emotions and can be achieved in many ways with a lot of people striving to find true happiness.

The second of the basic human emotions is sadness, which is the direct opposite of happiness but is something that everyone will feel at various points in their lives. When looking at someone who is experiencing feelings of sadness you might notice that their mood is dampened and they are unusually quiet. Sadness might also come with feelings of being overly tired and those who are feeling sadness might often be seen to be crying.

The third most recognised basic human emotion is that of fear. It is thought that fear is highly associated with survival and that our primitive selves used it as a detector for danger, which developed the ‘fight or flight’ response that many of us are familiar with. When someone is experiencing fear, you might notice this manifesting physically as tense muscles, a quicker heart rate or quicker breathing. When experiencing a feeling of fear, a person might find that their mind is much more alert.

The face of a fearful person might be seen to have widened eyes and the person might make some sort of attempt to flee from the situation.

The emotion of disgust occurs when a person finds something repulsive and is seen as one of the six basic human emotions. It can be brought on by a variety of things such as the sight of blood, death, dirt or any other thing which is seen as repulsive.

Someone who is experiencing the emotion of disgust might be seen to turn away in horror or may even experience physical symptoms such as being sick. The face might give away feelings of disgust by curling the lip or wrinkling of the nose.

The fifth basic emotion is anger which is an emotion experienced when someone feels frustrated at something. This emotion can play a part in the fight or flight response that we looked at when talking about fear.

Someone who is feeling the emotion of anger might be seen to be frowning or showing a strong stance. They may also stare or glare at the object of their anger. On top of this anger can also cause sweating or redness of the face as well as behaviour which is aggressive such as hitting or kicking.

The final basic human emotion is that of surprise which occurs when a person is not expecting something. This is usually an emotion which does not last as long as the others and can be noticed when a person raises their eyebrows or widens the eyes. The mouth may gape open and the person might physically jump. A person experiencing surprise may also scream or shout out. 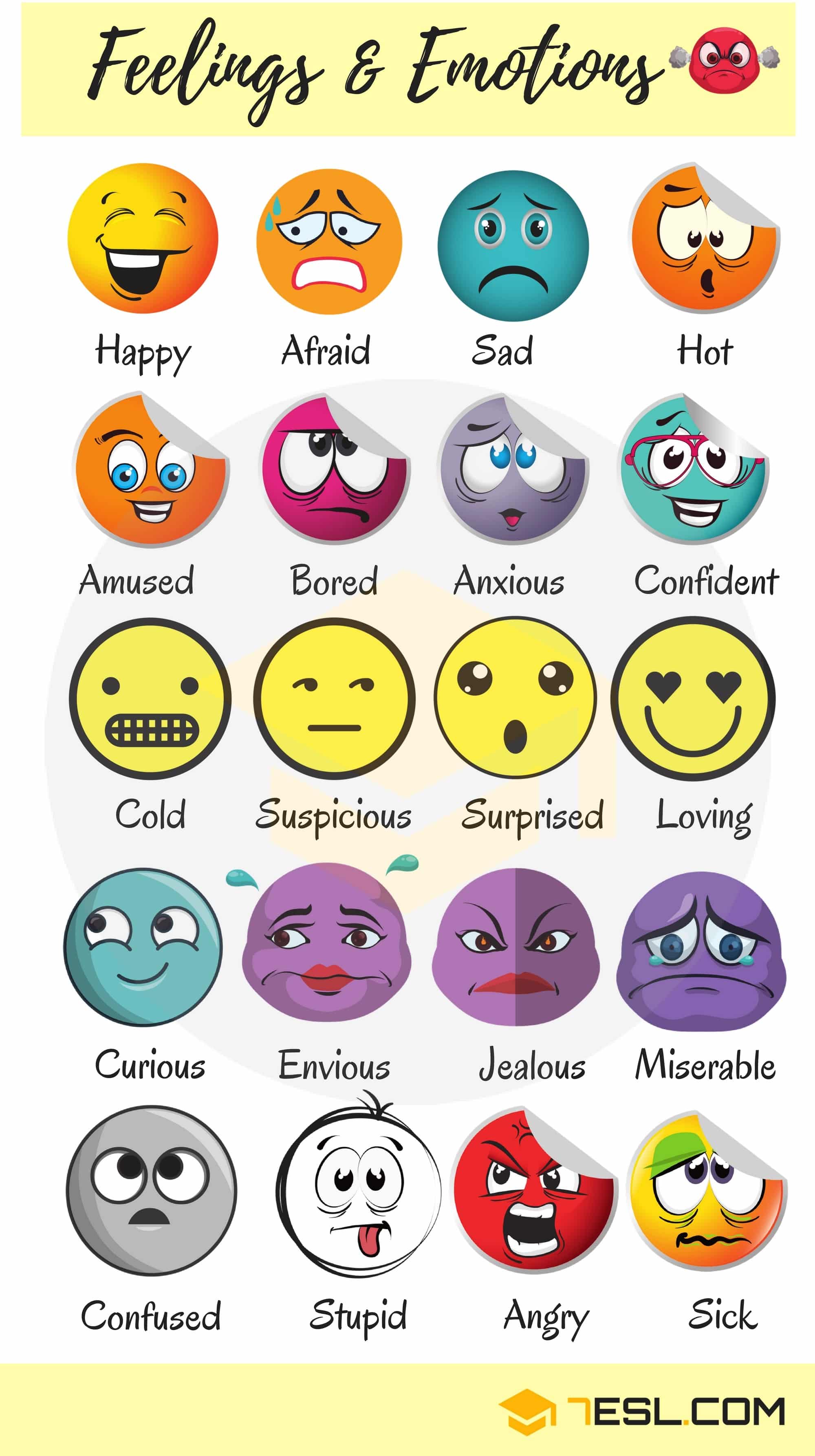 Although there are the six basic emotions which we have discussed, there is a wide range of variants on these. Not only are these a better way of describing the basic emotions they are also a good way to increase your vocabulary and make your speaking and writing much more broad. Let’s take a look at a list of emotions you can use to describe all of the six basic ones.

There are such as wide range of emotions and using different words to describe them can make your speaking and writing sound much more diverse. Whilst there are six basic human emotions there are hundreds of words which can be used to express the intensity of each of these.

Your lessons are great! Those are very helpful to me forever!!!! Thanks a lot, god bless you forever