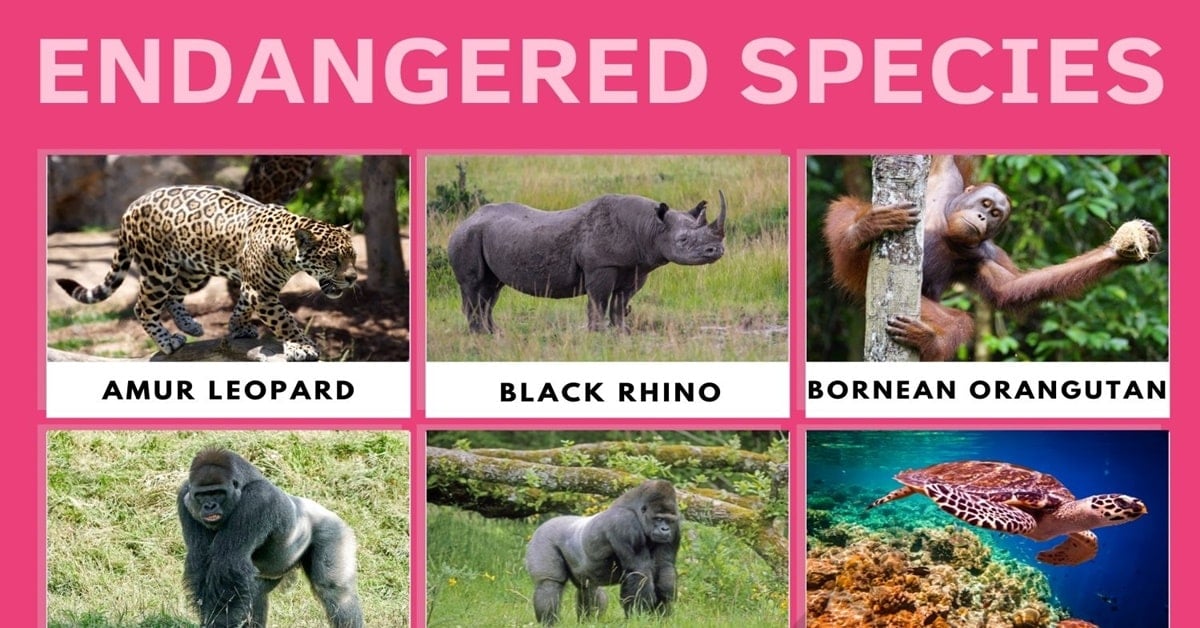 Extinct! Endangered! These are two words you never want to see about a species of animal. As humans, we have an innate love of wildlife. Who does not love seeing a majestic tiger or elephant? We want to see animals protected. With the world population continuing to grow, wildlife habitats are increasingly being encroached upon. Rainforests and other habitats are being destroyed for consumer goods. These are only a couple of factors contributing to the loss of animal species.

There are too many endangered species. Right now worldwildlife lists 16 species as critically endangered! 27 species are listed as endangered. There are also 27 species considered vulnerable or near threatened. Animal Planet lists 42 species as endangered. This list is one less than the world wildlife (WWF) list. This could be because different data is used. In this article, the list from the WWF will be used.

What Is an Endangered Species?

What does it mean for a species to be endangered? It means that a species has a very high risk of extinction. If a species becomes extinct, it disappears completely from the face of the earth. Sadly there are too many endangered species.

These are the 16 species listed as critically endangered. Later facts about the top 5 of these wonderful animals will be provided.

At the end of this list, 3 species are lumped together: Sea Turtles, Tigers, and Whales. Nearly all 7 species of Sea Turtles are considered endangered. The Hawksbill is on the critically endangered list. The Tiger is broken into two sub-species, the continental and the Sundra. The Sundra Tiger is on the list of critically endangered species. The continental sub-species includes the Bengal, Malayan, Indochinese, and Amur (Siberian) tigers. The Sundra is an island tiger. The only other island tiger that is not extinct is the Sumatran Tiger. 3 species of whales are being singled out on the endangered list: Blue, Fin, and North Atlantic Right. These species are more endangered than the rest but all species are considered endangered.

The WWF thinks that most of any species remaining are around 90,000 worldwide. While it would be great to talk about all 43 species of endangered animals in this article, the focus is going to be on the 16 critically endangered list. Facts about 5 of these amazing animals will help you get to know them better. Or maybe you have never even heard of some of these species.

The Amur Leopards are located in the Russian far east and parts of China. This is the northern-most range of the leopard species. Leopards are normally found in the savannas of Africa but the Amur lives in temperate forests and mountains. There are only around 84 Amur leopards left in the wild. These cats weigh between 70-105 pounds, smaller than big cats. The Amur leopard can run at speeds up to 37 miles per hour and leap 19 feet horizontally and 10 feet vertically. Those are astonishing numbers. You can see why the Amur leopard is an excellent hunter. They are strong enough to carry off and hide their unfinished kills. This also shows great intelligence.

The Amur leopard is mostly a solitary animal but the males do sometimes stay with the females after mating and help raise the young. The lifespan is between 10-15 years in the wild, 20 years in captivity. There are other names that the Amur leopard is known by, the Far East leopard, the Manchurian leopard, and the Korean leopard.

Why is the Amur leopard endangered? It is mainly because of poaching. The spotted coat of the Amur leopard sells for a high value. Part of the problem is that the forests they live in are easily accessible to poachers. The prey species of the Amur leopard, including the Roe deer, Sika deer, and the Hare are hunted by humans for food and cash. 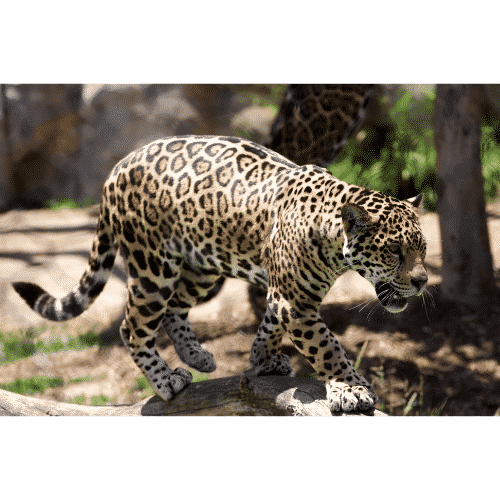 The Black Rhino are located in Africa. Their habitats are semi-desert savannahs, woodlands, forests, and wetlands. There are only around 5,600 black rhinos left in the wild. They are the smaller of the two rhino species in Africa. They stand a little over 5 feet tall and weigh between 1,700-3,100 pounds. They have a distinct hooked upper lip. This is the most notable difference, besides size, between the White and Black rhinos. Because of this upper lip, Black rhinos browse instead of graze, meaning they eat leaves from bushes and trees. Poaching is again a great threat to the Black rhino. There is a lucrative illegal trade market for their horns. Political instability and wars hamper conservation efforts. 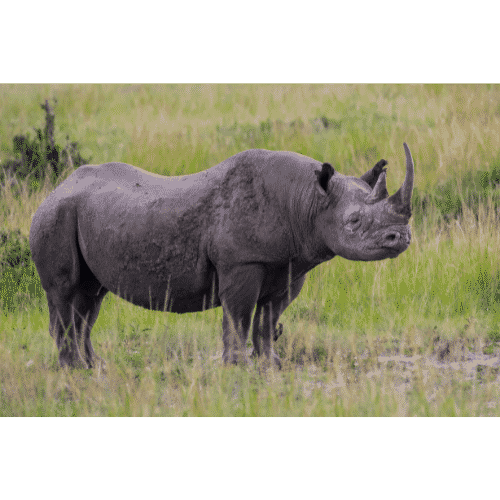 The Bornean Orangutans are located on the island of Borneo. There are 3 sub-species on the island. The Northwest, Northeast, and Central. Of these 3 the Northwest is the most threatened. There are only around 104,700 left in the wild. They stand between 3 and 5 feet tall and weigh anywhere from 60 to 220 pounds. The Bornean orangutan has a broader face and shorter beard and is darker in color than other orangutans. Orangutans play a critical role in dispersing plant seeds. This helps to keep the forest healthy. They are endangered because of hunting, logging operations, legal or illegal, mining, the conversion of forest land to agriculture, and the flourishing pet trade. 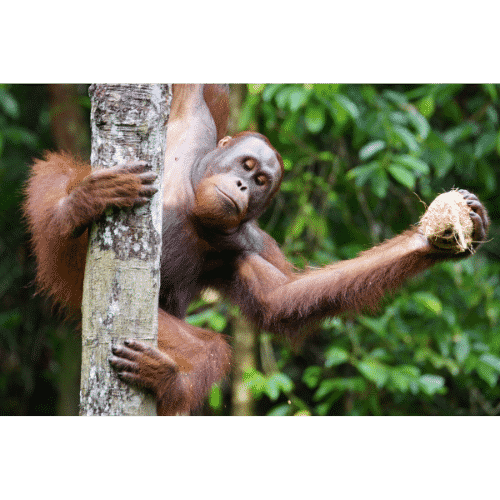 The Cross River Gorillas are located in Cameroon and Nigeria only in an area of about 3,000 square miles. They live in very rugged terrain and are very wary of humans. This makes it difficult to get an accurate number of Gorillas left in the wild. The estimated number runs between 200-300. When standing on two feet they are between 4 and 5 1/2 feet tall. They can weigh up to 440 pounds. They differ from other gorillas in skull and tooth dimensions. The conversion of forests into farms is shrinking their habitat. Poaching is also having an affect on their numbers. 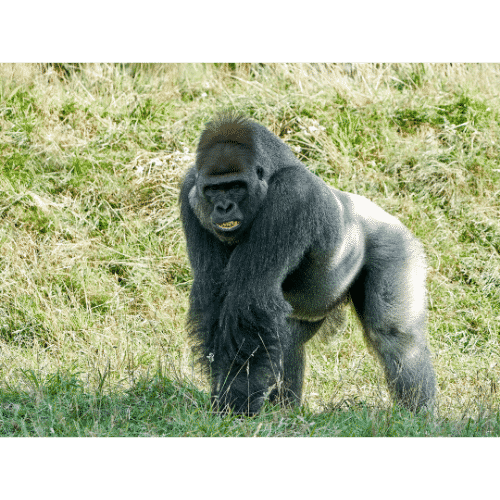 The Eastern Lowland Gorillas are located in the Democratic Republic of Congo. Their habitat is in the lowland tropical rainforests. It is estimated that there are only around 8,500 left in the wild. The Eastern Lowland gorilla is the largest of the four sub-species of gorillas. They are distinguished from the other gorillas by their stocky bodies, large hands, and short muzzles. Just like the Cross River gorillas, they stand between 4-5 1/2 feet tall and weigh up to 440 pounds. Civil unrest in the region, poaching, mining, and deforestation have caused a 50% decline in population since the 1990s.

Hopefully, none of these animals become extinct in the next few years. Many organizations are trying to save these animals and their habitats. In this article, only 5 endangered animals were facts given about. Please go and find more information on the rest of the endangered species. You will never regret getting to know them better because animals bring such joy into our lives. 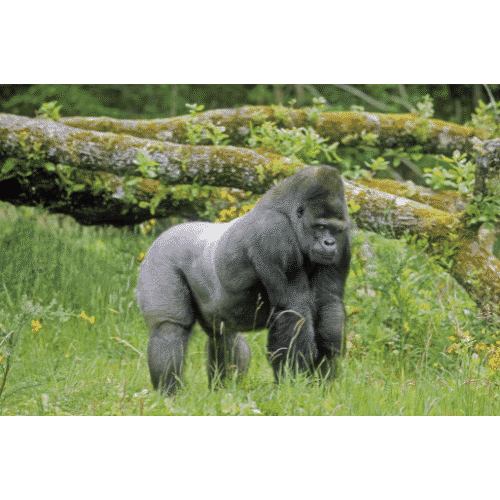 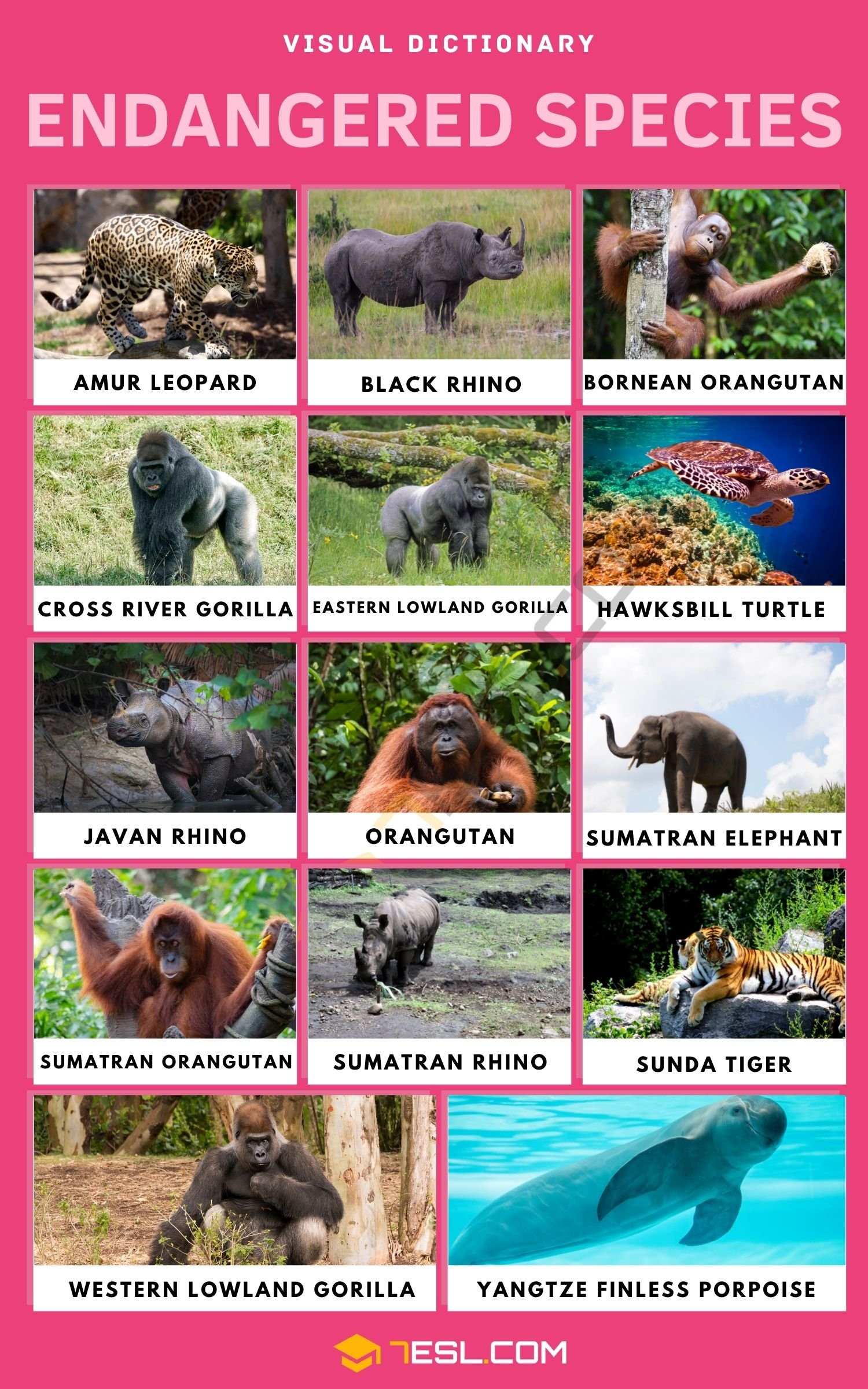