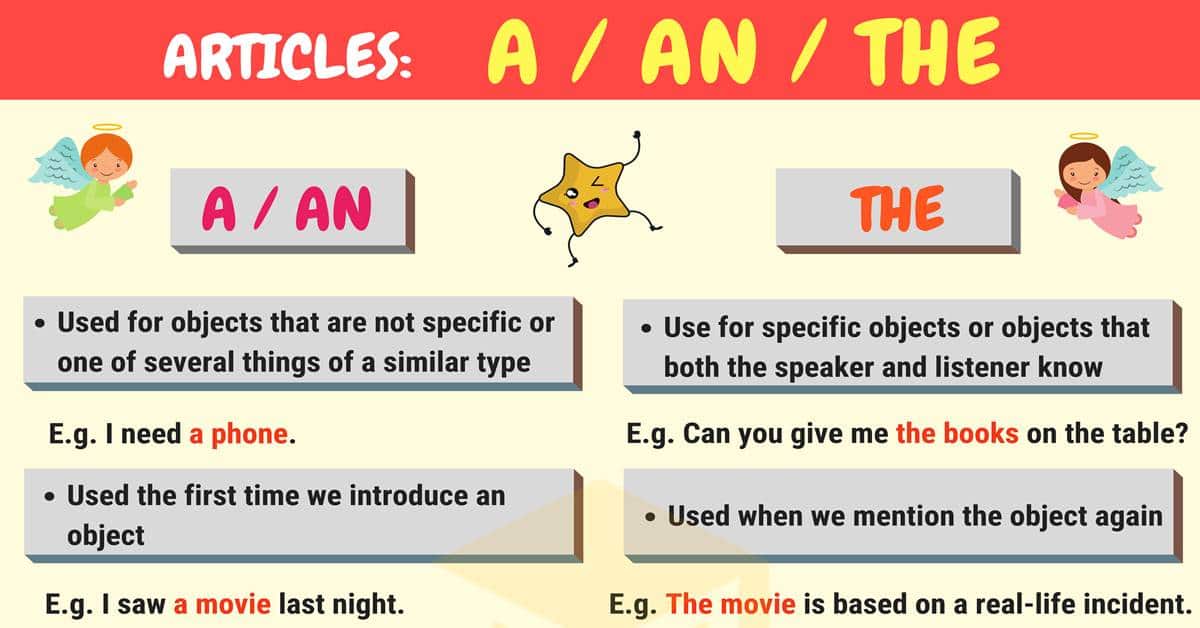 English Articles (a, an, the)! Learn how to use articles (a, an, the) in English with useful grammar rules, ESL printable worksheets and example sentences. When studying English grammar, you may have come across the article. We are going to take a look at what an article is, how it is used and the rules surrounding it. We are going to do this by taking a look at some examples of articles in use within a sentence, this way we will be able to gain a greater understanding of its function.

What Is An Article?

What Is An Article in English? A An The

In English grammar, there are two different types of article, the definite article and the indefinite article. In the most simple terms an article is a way of letting the listener or speaker know that a noun is either unspecific or specific. The words which are used as articles are the, an and a.

Let’s take a look at some examples to clarify the meaning of an article.

Simply by changing the article, we have made the sentence a more general statement and not about a specific thing or person.

There are only three articles in English: a, an and the.

There are two types of articles indefinite ‘a’ and ‘an‘ or definite ‘the’. You also need to know when not to use an article.

In many languages, articles are a special part of speech which cannot be easily combined with other parts of speech.

Article Grammar: A An The – Image 1 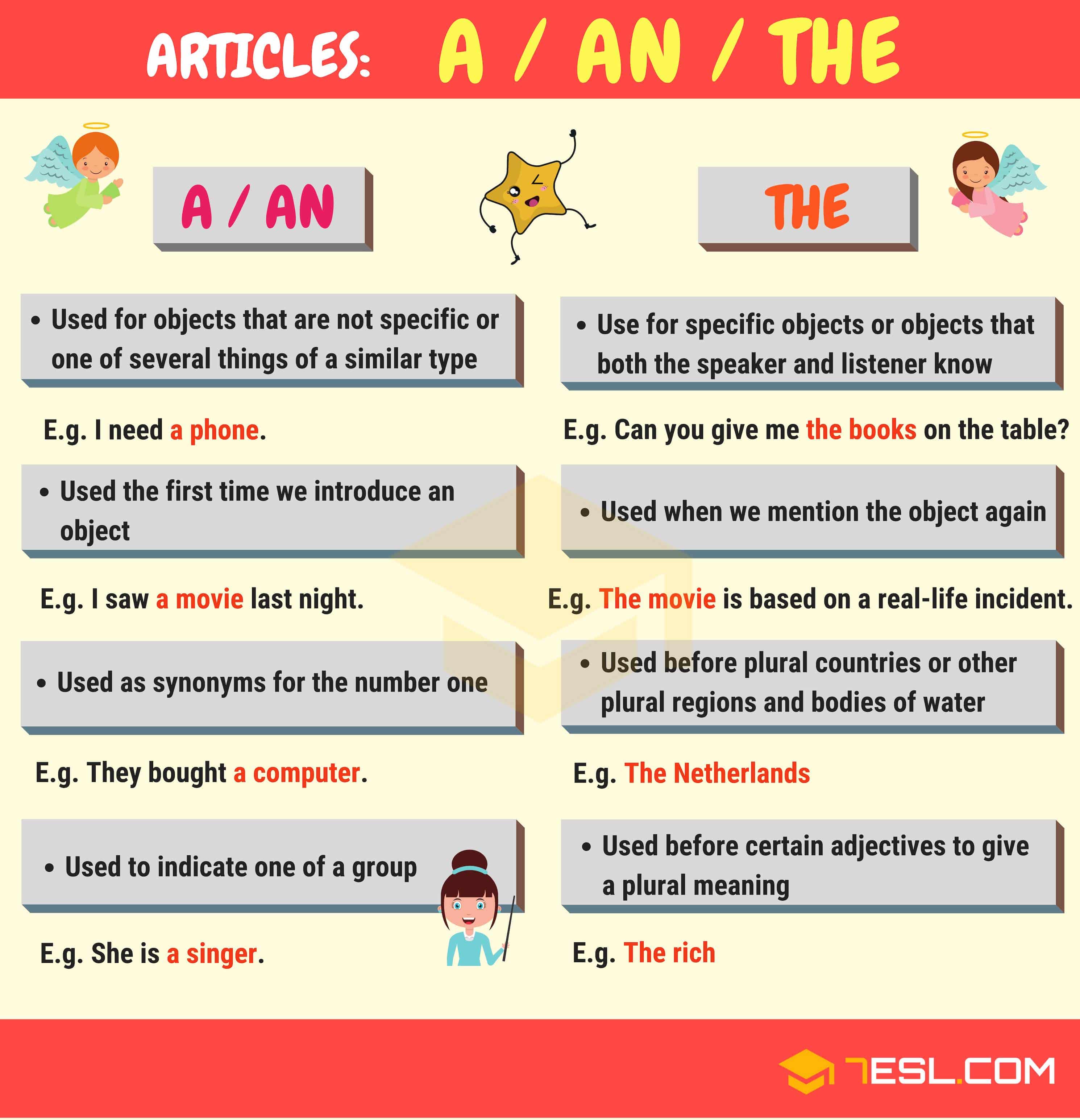 As we mentioned, in English there are two different types of article, the definite article and the indefinite article. They are each used for their own purpose and we are now going to take a look at these in a little more depth.

The best way to remember what a definite article is, is to remember that the word ‘the’ is the definite article. As we have briefly seen in our earlier examples, the word the can be used to demonstrate that the speaker is referring to something specific and not talking in a general sense.

When using a definite article, it can be combined with either a plural, a singular or an uncountable noun. We are now going to take a look at some examples of the definite article being used within a sentence.

How to Use Articles in English Grammar? (A An The)

Rules For Using An Article

There are a variety of rules when it comes to using either a definite or an indefinite (did you notice the use of ‘a’ and ‘an’ in this sentence?) Let’s now take a look at the rules surrounding this grammatical element in order that we use it correctly.

Rule #1. We mentioned that depending on whether the noun begins with a consonant or a vowel will depend on which form of the indefinite article you will use, however like many times in the English language, there are some exceptions to this rule. The best example of this is with the word ‘honour’ which begins with a consonant, however this letter is not pronounced so you would not use the word ‘a’ in this instance, you would say:

The same rule applies when a word begins with a vowel which is pronounced as though it were a consonant. An example of this would be:

Rule #2. If you are using a noun which has been modified by an adjective, then the article should come before the adjective and should correspond to the adjective rather than the noun. For example, the noun ‘igloo’ would usually take the article ‘an’ however if you wanted to describe it as being large, you would create a sentence as follows:

Another example of this would be if you were going to refer to the noun ‘book’ which would usually take the article ‘a’ however if you wanted to describe the book as being amazing, then you would create a sentence as follows:

Rule #3. When you are using an uncountable noun (this is a noun which cannot be counted or is infinite or intangible. Some examples of these might be sand, wine, soda, air, information etc) you should never use the indefinite article. The reason for this is that this form of article is only used for singular nouns. You may, however use words such as some when talking about these uncountable nouns. Let’s take a look at some examples.

If you were to say the following sentence, it would not make any sense.

Because the noun is uncountable, the use of the indefinite article does not sound correct, however if you were to use the definite article, this would not make sense either as you would be asking for a specific thing, consider the following sentence:

Unless there is a specific bowl of water waiting to be given to the dog, this sentence would not be correct. If you wish to refer to an uncountable noun in this way, the correct sentence would be as follows:

Rule #4. If you are using an article with a possessive pronoun, the rules change once again. In actual fact, the use of these two together does not make much sense. Look at the following sentence:

This is not correct as you cannot use an article with a possessive pronoun, therefore the article should be omitted.

Rule #5. Finally, there may be times where an article can be left out, as it is not necessary to refer to the noun. A good example of this would be the sentence ‘I like to play football.’ Whilst football is a noun, using the before it would be unnecessary and so the article is not included.

Indefinite Articles | A and An

The words A and An are called indefinite articles. We can use them with singular nouns to talk about any single person or thing.

Deciding which indefinite article to place in front of a word depends upon the initial sound of the word, not the first letter of the word.

‘A’ is used before words beginning with a consonant sound.

The article ‘an’ should be placed before words that begin with a vowel sound. 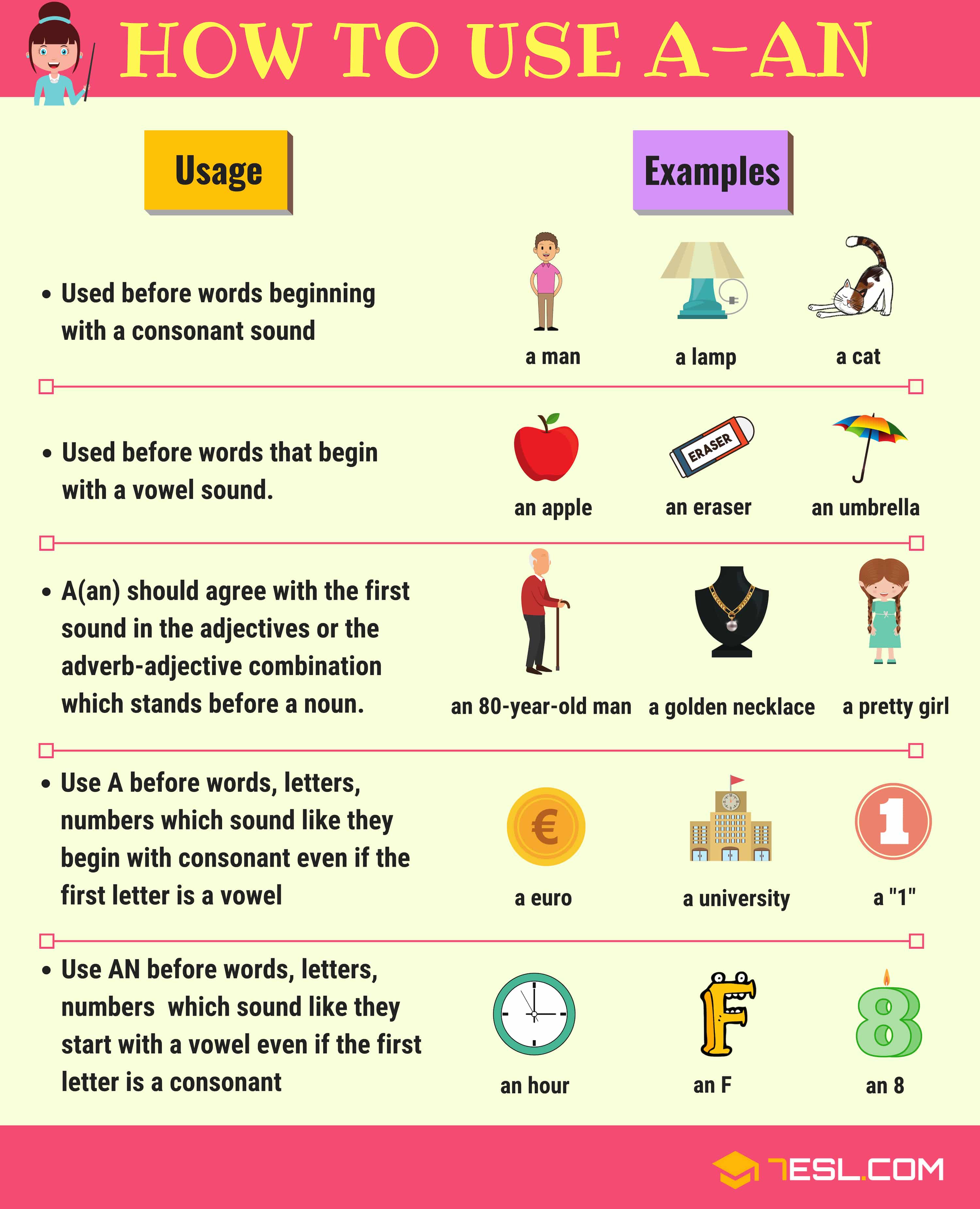 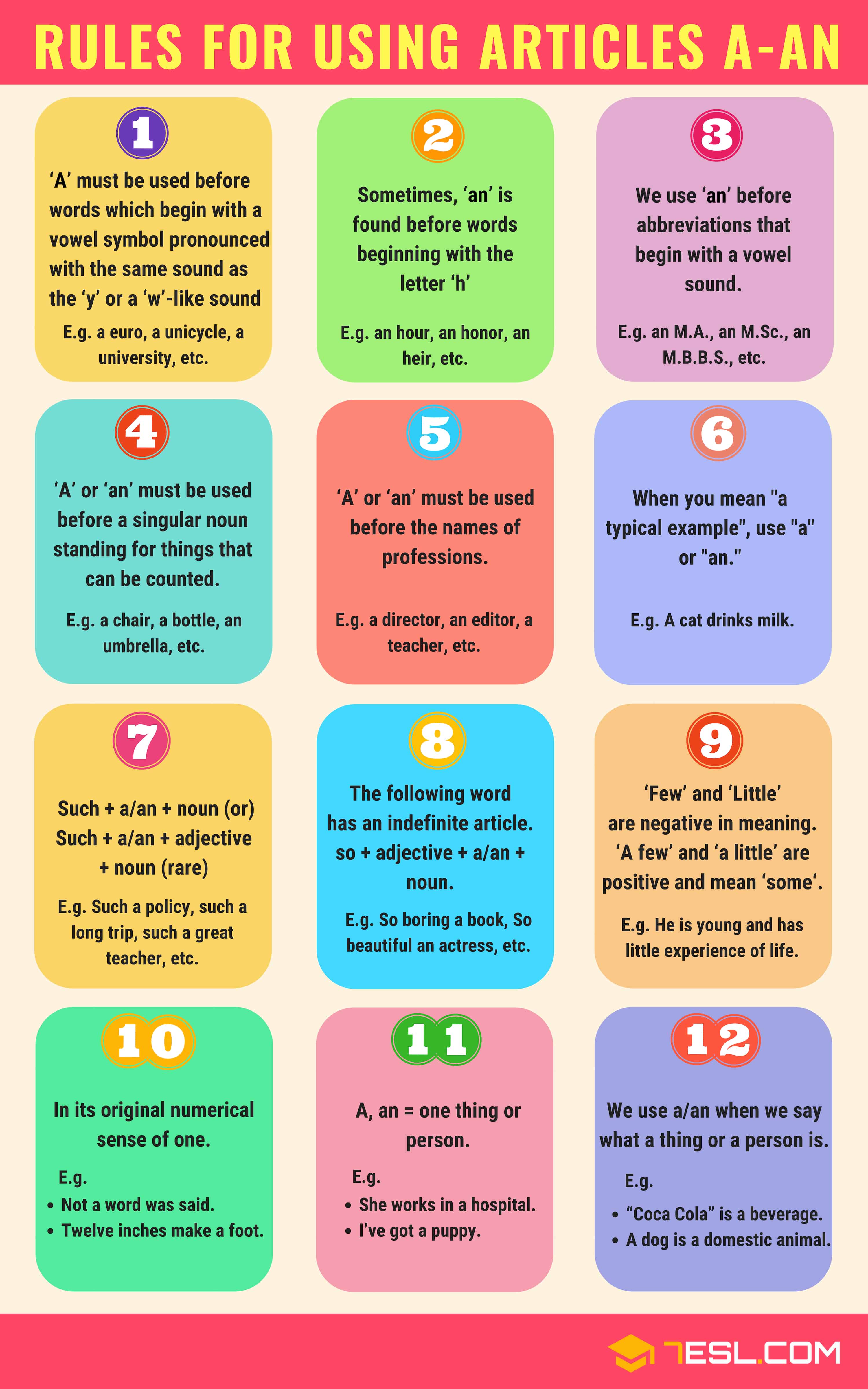 The Definite Article ‘THE‘ generally specifies and identifies. It answers the question: ‘Which one?’ Is specifies a person, place, or thing already mentioned.

Article Grammar: The Article THE in Geographical Names – Image 4

When Not to Use an English Article

1. We usually use no article to talk about things in general.

2. We do not use an article when talking about sports and games.

3. Do not use article before the names of countries unless the name suggests that the country is made up of smaller units or constituent parts.

Use the – the UK (United Kingdom), the USA (United States of America), the Irish Republic… (Kingdom, state, republic and union are nouns, so they need an article.)

4. Do not use article before the name of language.

5. Do not use article before the names of railway stations when they are also place names.

6. Do not use article before the names of meals if they refer to the meals generally, as a part of the daily routine.

7. Do not use article before noun + number.

Article Grammar: When to Use No Article – Image 5 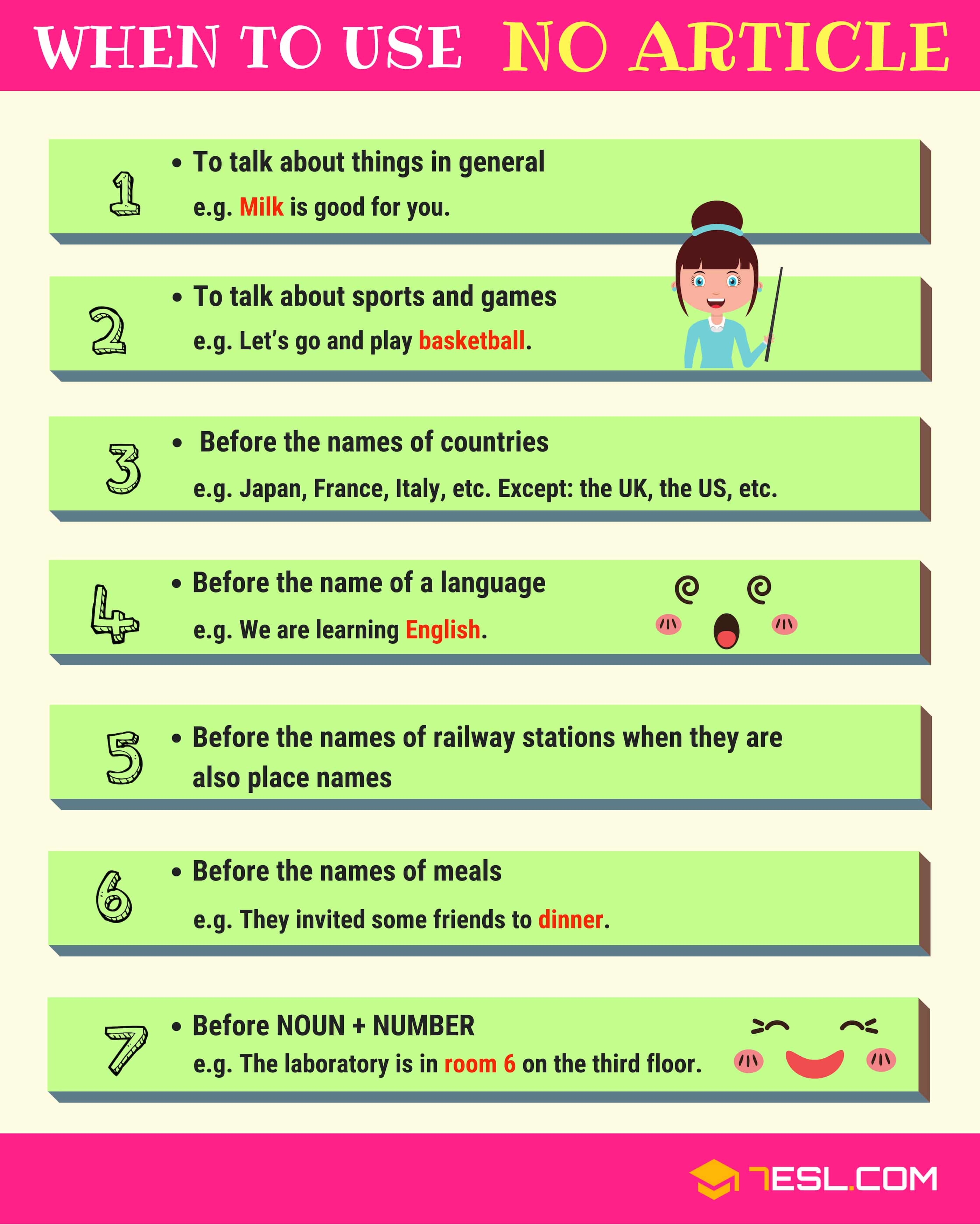 Articles with Countable and Uncountable Nouns

Learn how to use articles with countable and uncountable nouns in English.

You need to categorize the noun as count or noncount to choose the correct article. 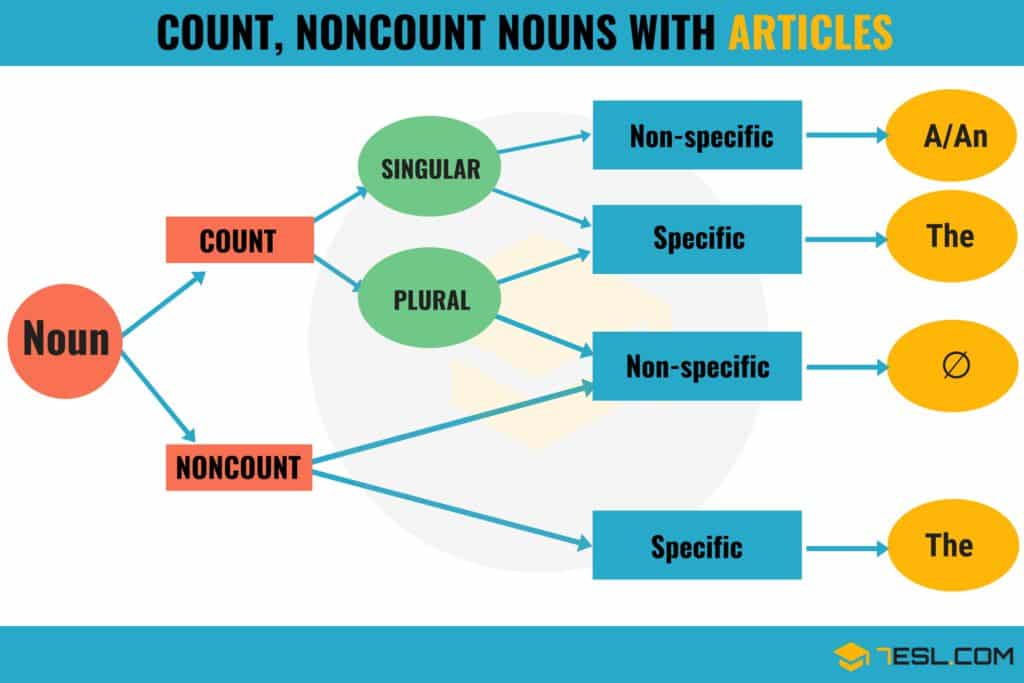 An article is a very important part of English grammar and how they are used always depends on the noun that they are referring to, unless that noun in being modified by an adjective, in this case the article will correspond with the adjective. There are various rules surrounding the use of articles, yet these are simple and easy to learn.

i hate you so much

“An author should possess unique style of writing” is this correct or which article will be used instead of this?

The sentence is not correct as it is missing ‘a’ before unique style of writing. Also author is a vowel sound (a, e, i, o, u) , not a consonant sound.

hi i love you sexy boy can we do s*x

finally somebody write something good keep it up

east and west 7esl is the best