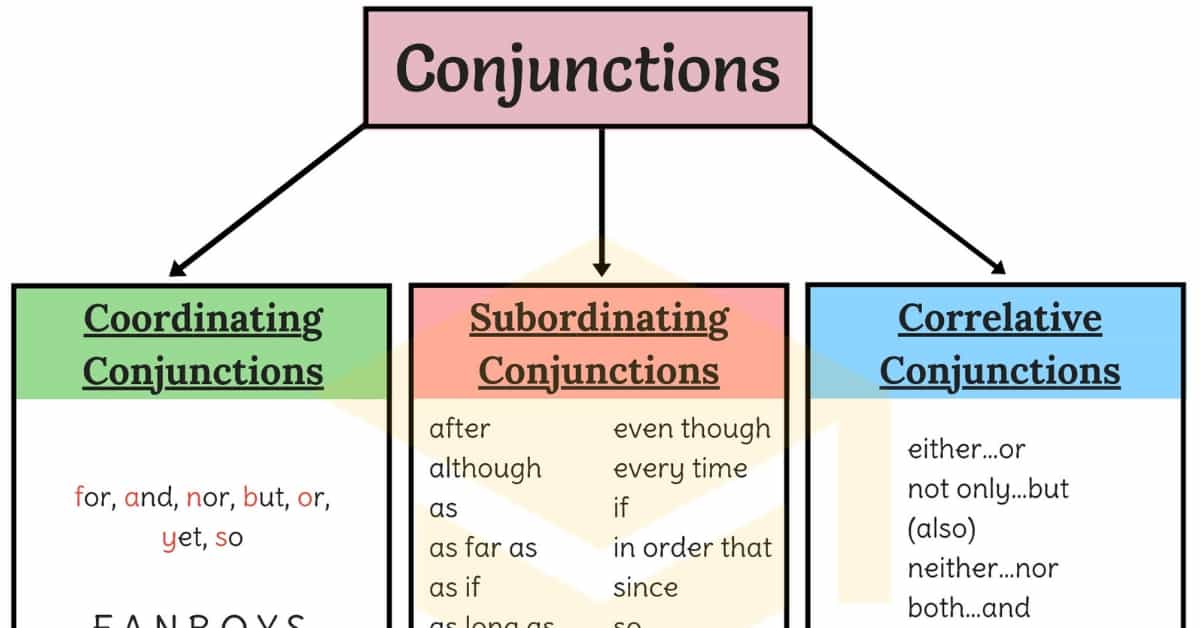 What is a Conjunction?

A conjunction is a word which is used to link thoughts and ideas within a sentence. You might think of them as being ‘the glue’ of the phrase. Without the use of a conjunction, you would not be able to express your thoughts and ideas in a manner which flows. Your sentences would be forced into being simple and concise. Let’s take a look at an example. Consider the following sentence.

You can see how the words highlighted in bold (the conjunctions) bring each of the ideas together to create a flowing sentence. Without the use of a conjunction, the wording would be much more different.

This does not sound as audibly appealing and uses far too many words and sentences, making it impractical. It is important to make sure that when you are using conjunctions that you make sure that they are consistent, for example:

Using a Conjunction to Start a Sentence

It is a common misconception that a conjunction cannot be used to start a sentence, but as we have seen, a subordinating conjunction can be used at the start of a sentence provided a comma is used to separate the two clauses.

You may also use a coordinating conjunction to begin a sentence. However, it is important to do this sparingly as using too many conjunctions at the start of sentences can make your speech or writing sound weak.

A conjunction is a way of linking together two thoughts or ideas in the same sentence. They are a useful device for avoiding the use of repetitive and choppy, short sentences and cause your speech and writing to flow.

There are three types of conjunctions: subordinating, coordinating, and correlative. They connect sentence parts to one another.

Transitions function like conjunctions, but instead of joining clauses, they connect sentences and paragraphs.

Learn a useful list of conjunctions in English with different types and example sentences. As with various forms of English grammar, there is more than one type of conjunction, we are now going to take a look at each type in a litter more detail.

There are three types of conjunctions: 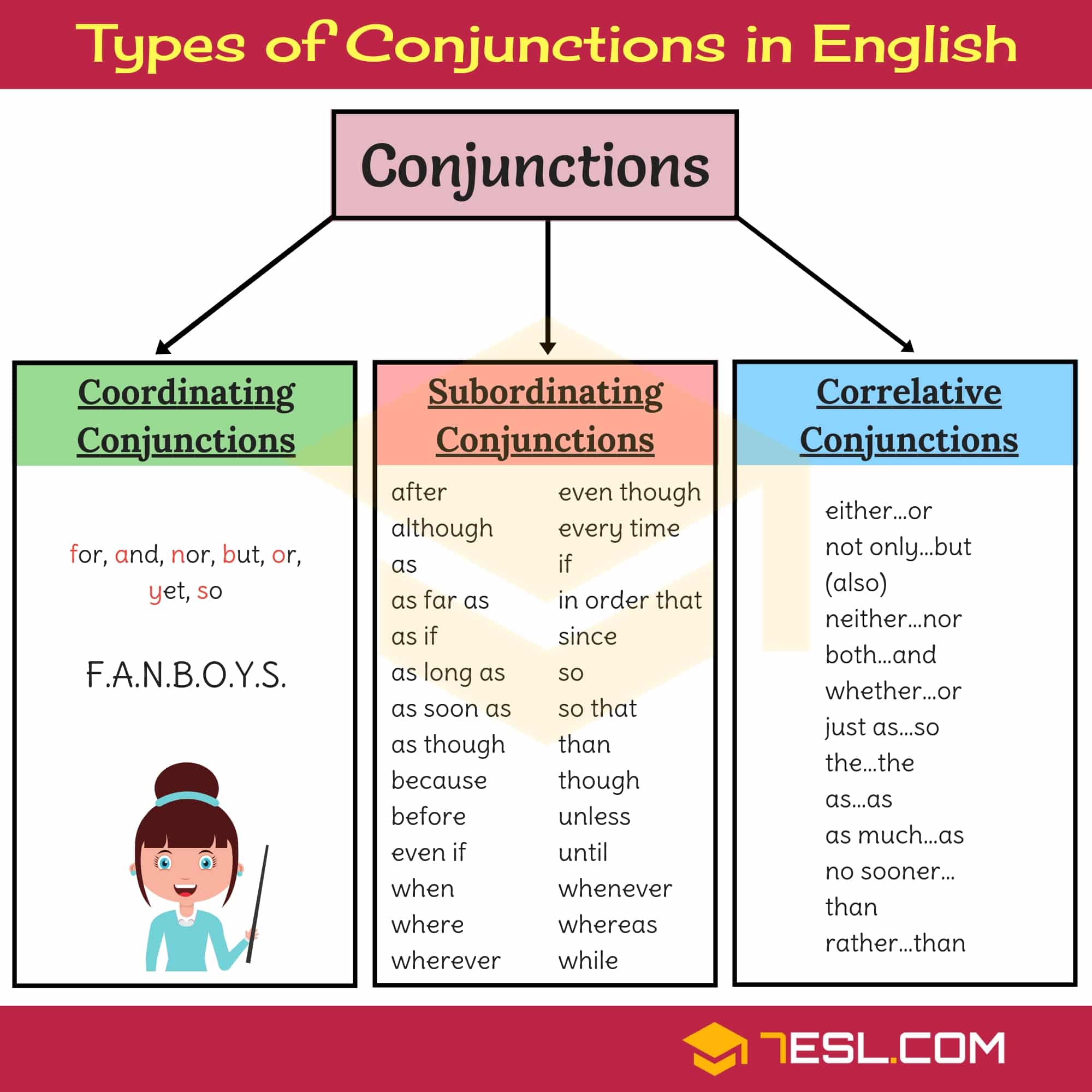 When most people think of conjunction, these are the words that will spring to mind. Let’s take a look at some examples of these conjunctions being used within a sentence.

It is worth noting that, as we see in the above examples, when a conjunction is being used to join two independent clauses, a comma is used before the conjunction. 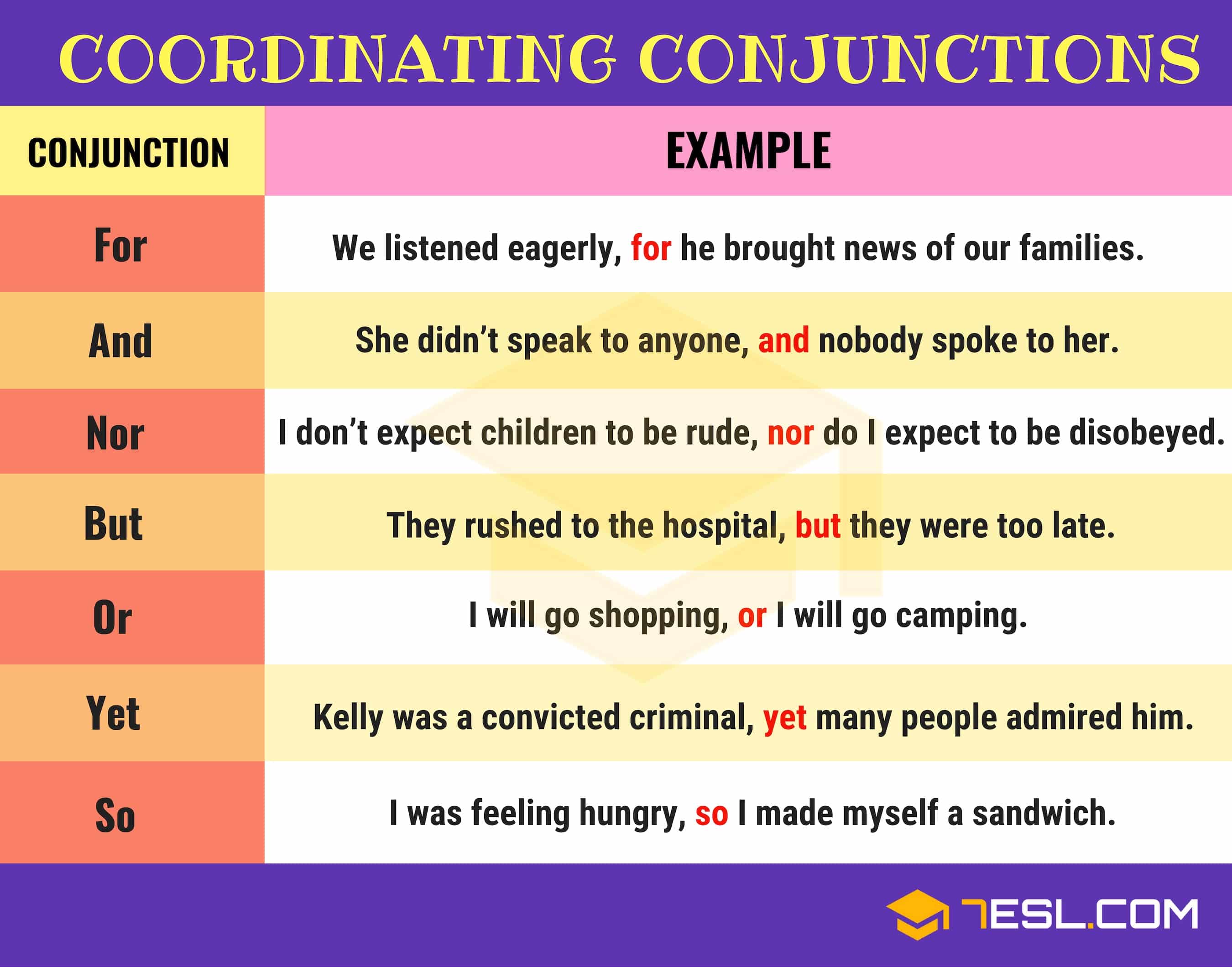 Notice that some of the above examples are adverbs-these can commonly function as a subordinating conjunction as a way of linking the two thoughts. A good example of this is the sentence ‘Cinderella could stay at the ball until the clock struck midnight.’ The independent clause, which is the first part of this sentence could be used as a standalone phrase, however the dependent clause cannot and so the use of the conjunction connects it to the first thought and causes it to make sense.

Let’s look at some further examples of this:

You will notice that when the dependent clause starts the sentence, a comma is used to separate the two clauses.

Than, rather than, whether, as much as, whereas, that, whatever, which, whichever, after, as soon as, as long as, before, by the time, now that, once, since, till, until, when, whenever, while, though, although, even though, who, whoever, whom, whomever, whose, where, wherever, if, only if, unless, provided that, assuming that, even if, in case (that), lest, how, as though, as if, because, since, so that, in order (that), that, as … 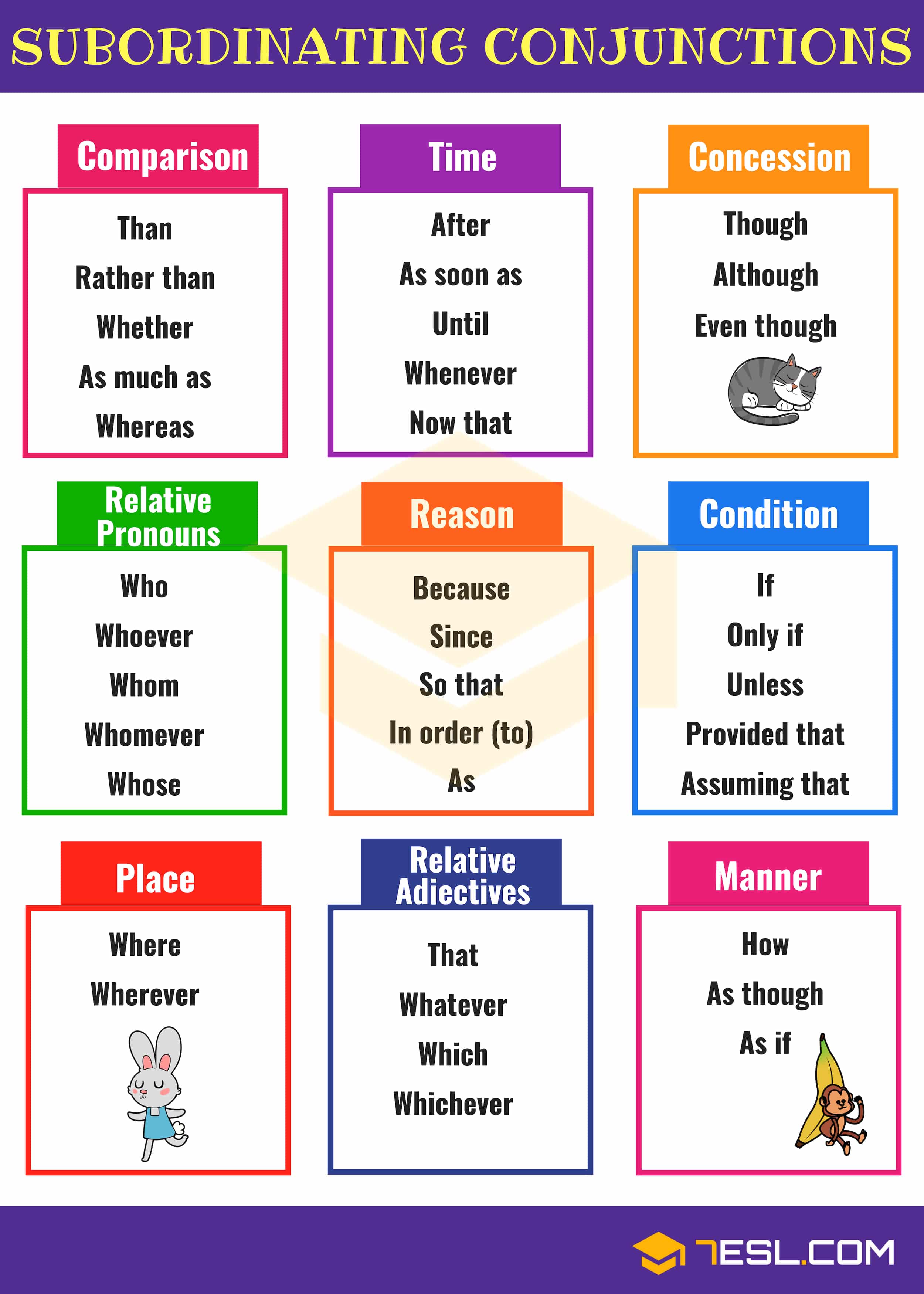 Examples of correlative conjunctions are as follows:

We are now going to take a look at some examples of correlative conjunctions being used within a sentence.

Correlative conjunctions consist simply of a coordinating conjunction linked to an adjective or adverb. 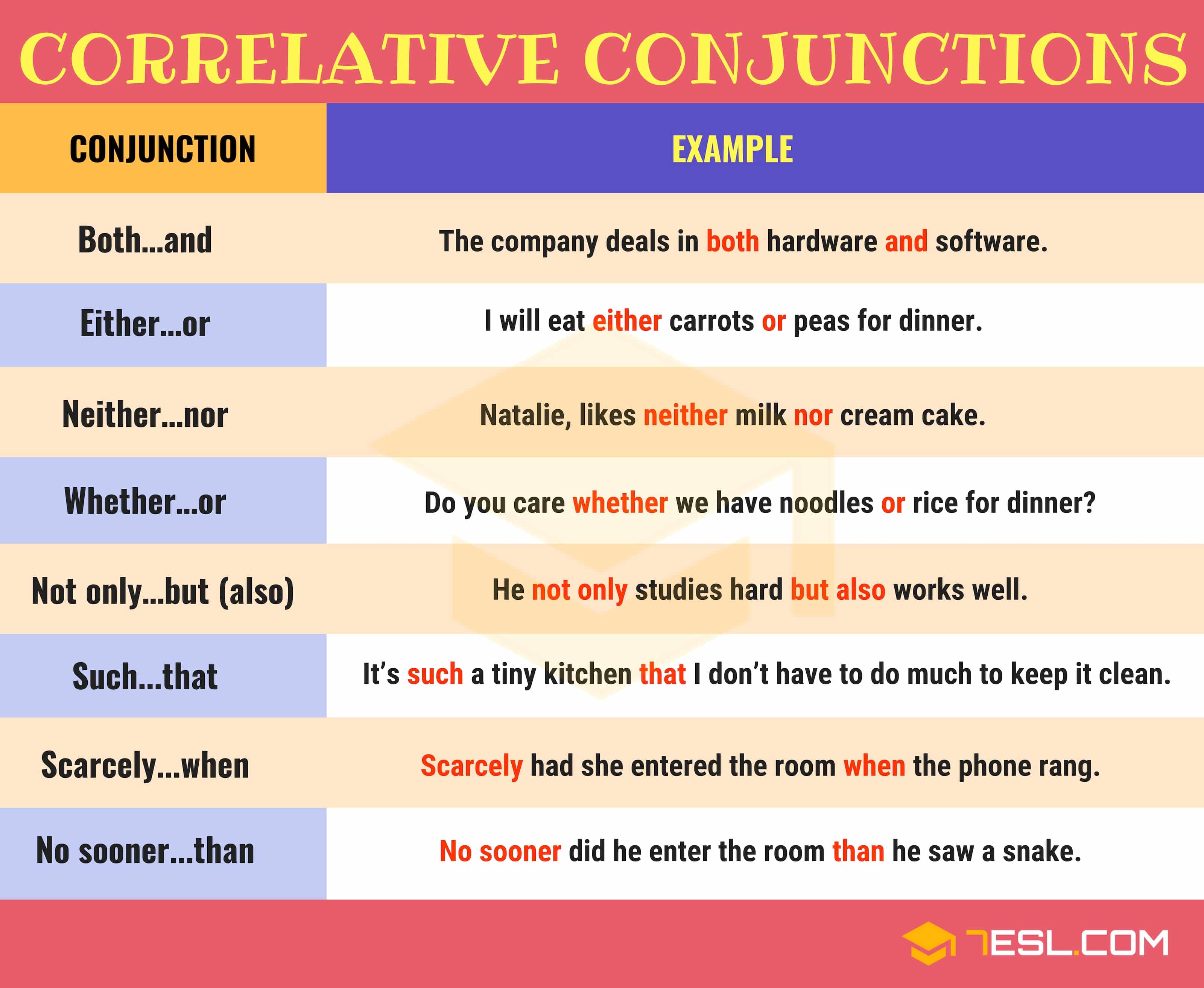 Knowing how to use conjunctions properly will help you write more varied and complex sentences. Simple conjunction mistakes make your text cumbersome and hard to read. These mistakes will detract from your message and cause your readers to doubt the sincerity behind your text.

To write a confident article, you need to avoid the following missteps:

Using more than one conjunction to join two clauses

In the English language, you do not use two or more conjunctions in a sentence. One is enough to hold any statement with two clauses together.

The second sentence is less wordy. It flows better, and the meaning is easily understood. In comparison, the first sentence is clunky and does not sound right when read aloud.

You cannot use not with unless in a sentence clause. It would suggest a double negative because unless implies if…not.

Separating a subordinate conjunction from the main clause

People sometimes mistakenly separate a dependent clause from an independent clause. Generally, this premature separation occurs when a subordinate conjunction starts a sentence. For instance, beginning a sentence with because often causes grammatical issues; especially, for those learning English.

A comma will separate the dependent clause from the independent. Doing this improves the overall readability of your work.

You can use a relative pronoun like a conjunction to join clauses. That is an example of a relative pronoun. That refers to the object or subject of the verb that follows. Because of this, that is not often used to replace when or where in a sentence.

The relative pronoun becomes redundant when there is already a subject or object in place. For this reason, you usually use that to replace which or whom but not when and where.

Not only … but also

The language that follows each part of the conjunction must be parallel. Without balance, your writing becomes tricky to read. Hence, it affects the fluidity of your words.

In the above example, both sentences have the same meaning, but they have different constructions. The first sentence is not parallel. Hence, the first sentence follows not only with an adjective and but also with a dependent phrase.

In contrast, an adjective follows each part of the correlative conjunction in the second sentence. The two similar components of speech make the sentence balance and your writing stronger.

Commas can show emphasis, and because of that, the above rule cannot be without some flux. A comma can separate a correlative conjunction if you want to draw attention to a particular clause. For example:

The commas in the sentence above are not necessary. Instead, they represent a stylistic choice that causes you to focus on a particular detail.

It would also be correct to write the sentences in the following way:

Answer the following question about conjunctions by circling the correct answer for each statement.

Question #2: Before I went to the store because I was out of milk.

A. Correct use of conjunctions

B. Incorrect use of conjunctions

Question #3: She ate not only cookies but also chocolates.

A. Correct use of conjunctions

B. Incorrect use of conjunctions

Question #4: What is a conjunction’s key responsibility?

Question #5: Nor, but, and yet are examples of this conjunction type?

Question #6: An auxiliary verb appearing at the beginning of a sentence does what?

A. Introduces a comma

C. Introduces the need for two conjunctions in one sentence.

Question #7: A subordinating conjunction does what?

B. Joins an independent clause to a dependent one

Question #9: Is her an example of a conjunction?

why we used a correlative conjunction?

We use them to create complex sentences and dependent clauses.

Correlative conjunctions are used to connect elements that are alike in some way.
You can have either pizza or spaghetti for dinner. (The two nouns are food.)
Not only did we laugh but also we cried. (Laugh & cry are both verbs.)