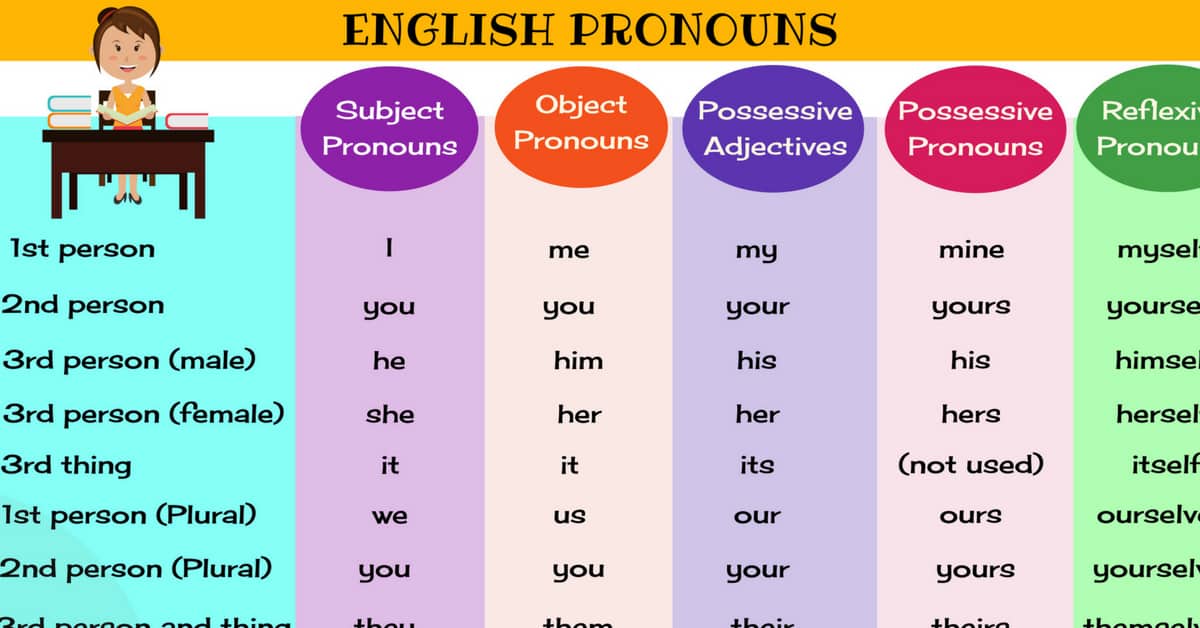 What is a pronoun? One of the most important forms of grammar in the English language is the pronoun. This is something that you will come across very frequently when studying the language and it is important that you are aware of what a pronoun is, how it is used and where it fits into a sentence. In this article, we are going to be taking a look at how pronouns work and what they are used for, this will be intertwined with some examples so that we can gain a better understanding of their function.

What Is A Pronoun?

What is a pronoun in English grammar? One of the nine parts of speech in the English language is the pronoun. A pronoun is a word that substitutes for a noun or noun phrase. Pronouns help keep our writing varied. Without pronouns, we would have to constantly repeat the same noun over and over again to tell a story. For example, if we wanted to write a story about Mary we would constantly have to repeat her name.

You could use alternative appellations to make the text more varied. However, this could confuse the reader. You reader may think that the two names you use are different entities entirely. For this reason, we use pronouns for noun substitutions.

Using she and her makes it clear that Mary is being referenced. There is no ambiguity.

In the most simple terms, a pronoun is a word which takes the position of a noun. One of the most commonly recognised forms of the pronoun are names of people, for example, John, Jill, Mary or Peter. However, a pronoun could also be one of the following words:

A pronoun is used instead of a noun or noun phrase in a sentence. A pronoun may take place of the name of a person, place or thing.

There are many more examples of pronouns, and you might think of them as pointing towards possession. As we mentioned, the pronoun is used as a way of replacing a noun, take a look at the following sentence:

There is no need to use the word couch in the second part of the sentence, therefore it could be replaced with a pronoun now that we recognise what item is being talked about, take a look at the modified sentence which uses the pronoun it.

We see pronouns in the English language every day. They help to make our texts more interesting. To understand how to use a pronoun properly you need to be familiar with the differences between different types of pronouns.

Below find a list of common pronouns and the main categories in which they belong. 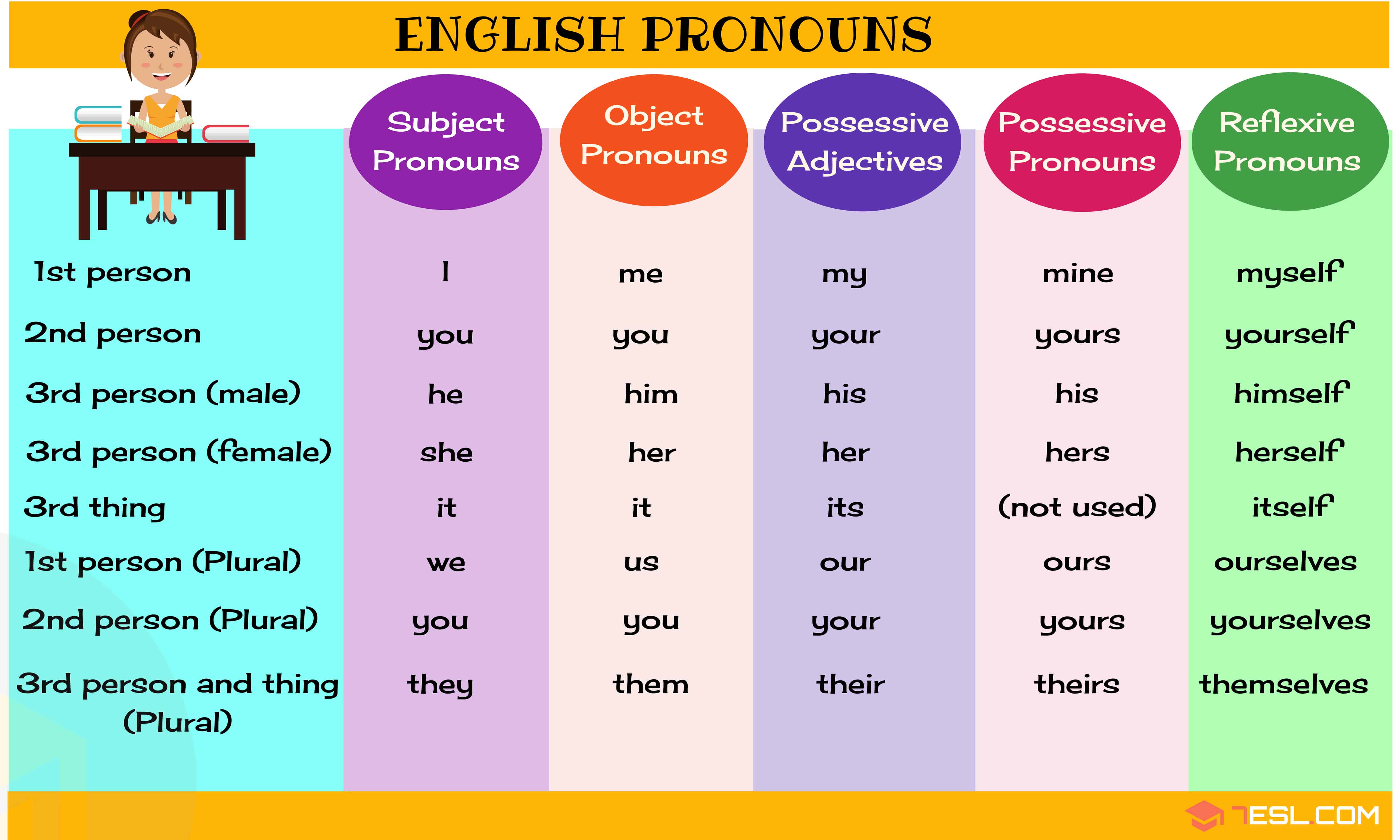 An antecedent, a noun or noun phrase, provides context for a pronoun. The antecedent allows readers to know what a particular pronoun is referencing. For example, it can refer to many different nouns: a garden hose, a shed, or almost any other noun you may need to mention.

You will find the antecedents in the examples below italicized. The pronouns are in bold.

Sometimes a writer will not explicitly need to include an antecedent. If the context of a sentence remains clear an antecedent is not necessary. If you know who is speaking, the pronouns I, me, and you can be clearly understood.

Technically, you can place a pronoun before an antecedent. Most people choose not to do this because it can confuse the reader.

Types of Pronouns (with Pronoun Examples)

We briefly discussed some of the different words that are classed as pronouns, however there are also different types of pronoun. Most often, pronouns fall into one of nine categories. We will now take a look at each of these.

This type of pronoun is used to refer to a person, in this category you will see words such as I, we, you, they, he, she, …

There are two types of personal pronouns: subject and object.

When the person or thing is the subject of the sentence, subject pronouns are used.

Object pronouns are used when the person or thing is the object of the sentence. 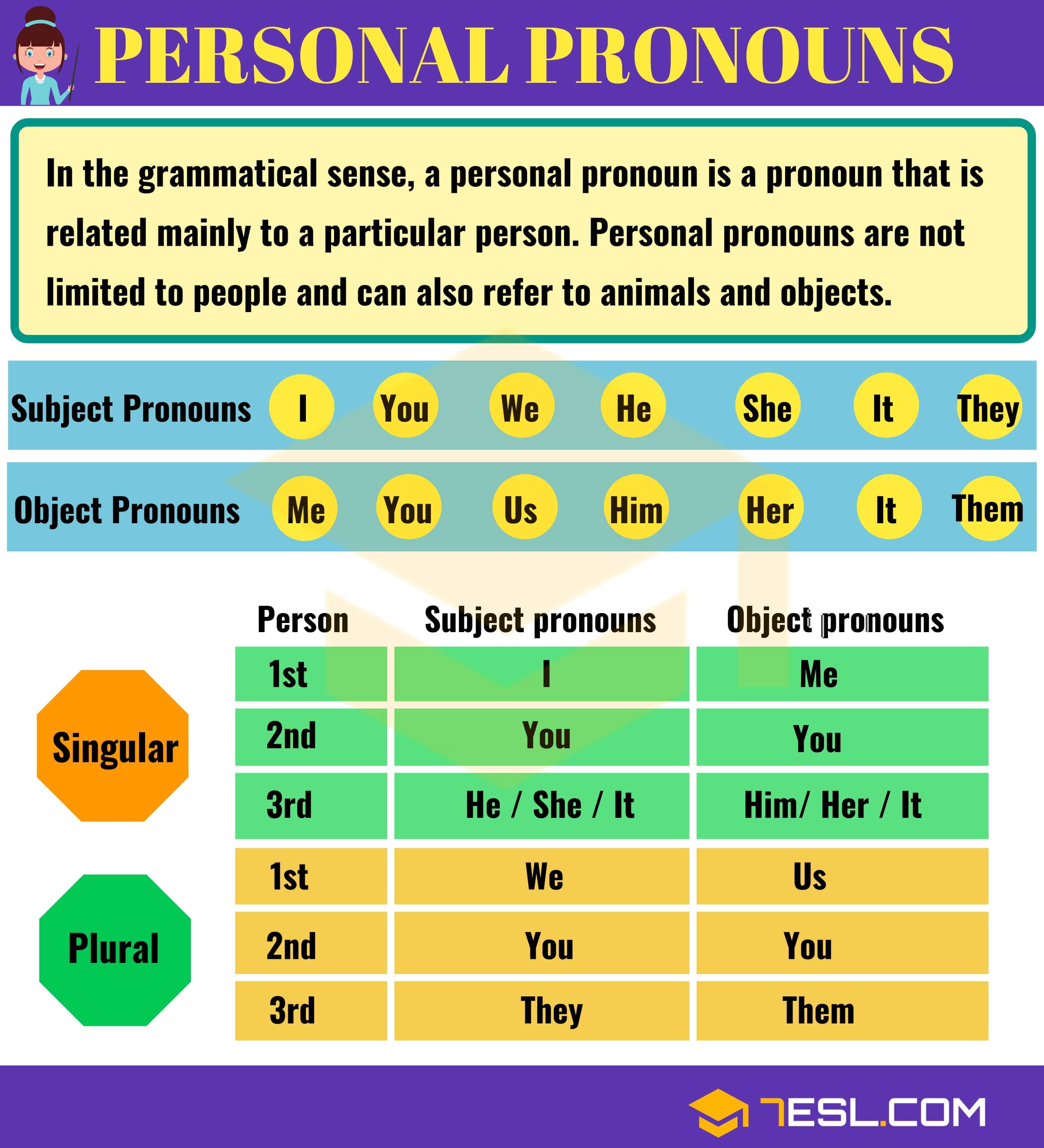 The reflexive pronoun will end in -self or -selves and is used in reference to another pronoun. Words within the category are himself, herself, themselves, yourself/ves, myself, itself.

In English, reflexive pronouns are used when a person or thing acts on itself.

Reflexive pronoun list: myself, yourself, himself, herself, itself, ourselves, yourselves, themselves.

In English they all end in –self or –selves and must refer to a noun phrase elsewhere in the same clause.

In English, possessive pronouns are used to indicate possession or ownership. They are: mine, yours, his, hers, ours, yours, theirs.

Possessive pronoun list: mine, yours, his, hers, ours, yours, theirs. 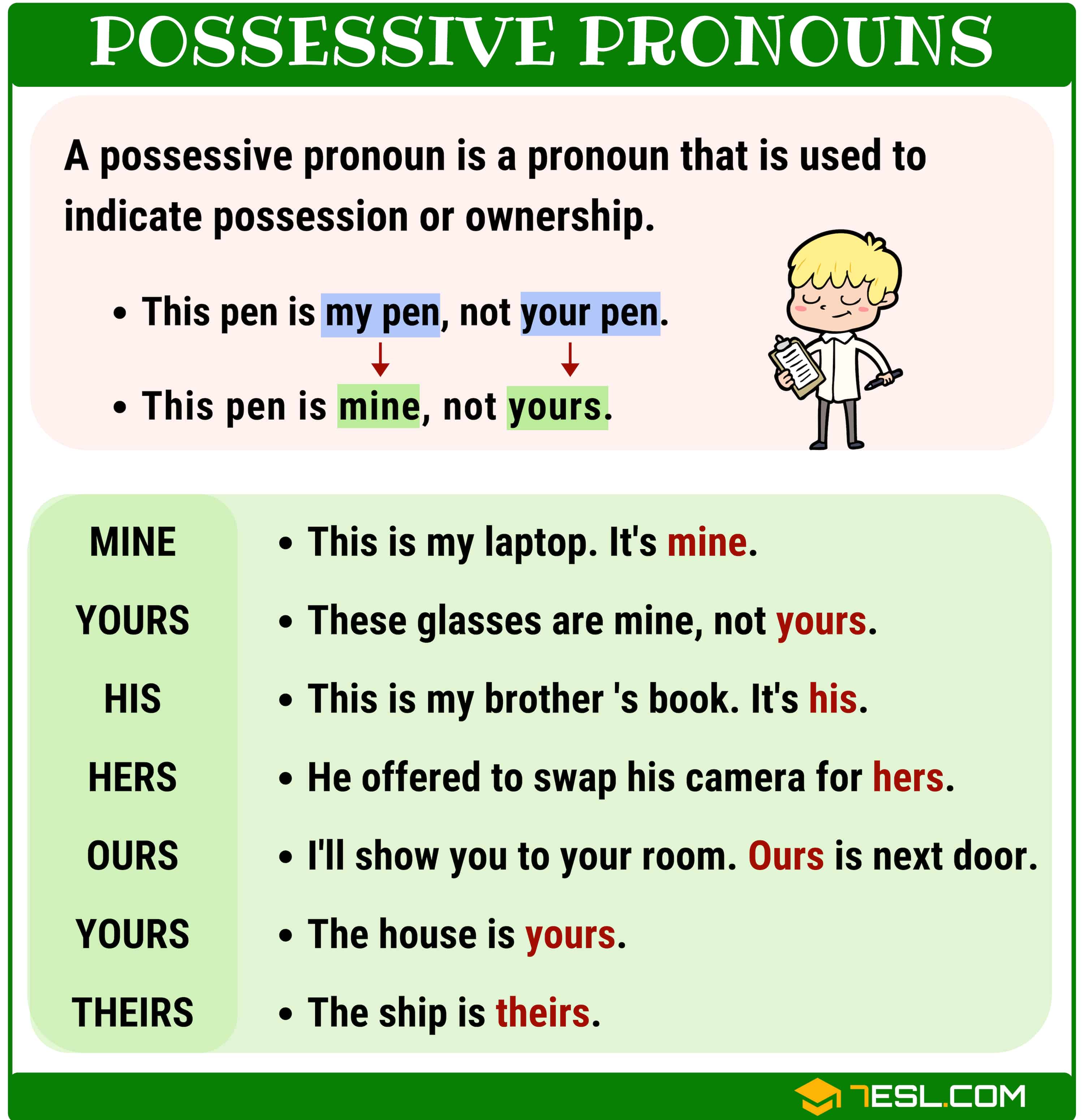 This type of pronoun is used to indicate something, the words in the category are these, those, that, this.

The demonstrative pronouns are the same words as the demonstrative adjectives (this, that, these, and those). They often distinguish their targets by pointing or some other indication of position. They can be either near or far in distance or time, specifically.

The indefinite pronoun is used to talk about something which is not specific. Words in the category are some, all, few, none, either, one, nobody, both, each, anyone, several etc.

An indefinite pronoun is a pronoun that refers to non-specific beings, objects, or places. Indefinite Pronouns can also function as other parts of speech too, depending on context.

Indefinite Pronoun List: another, anybody/ anyone, anything, each, either, enough, everybody/ everyone, everything,… 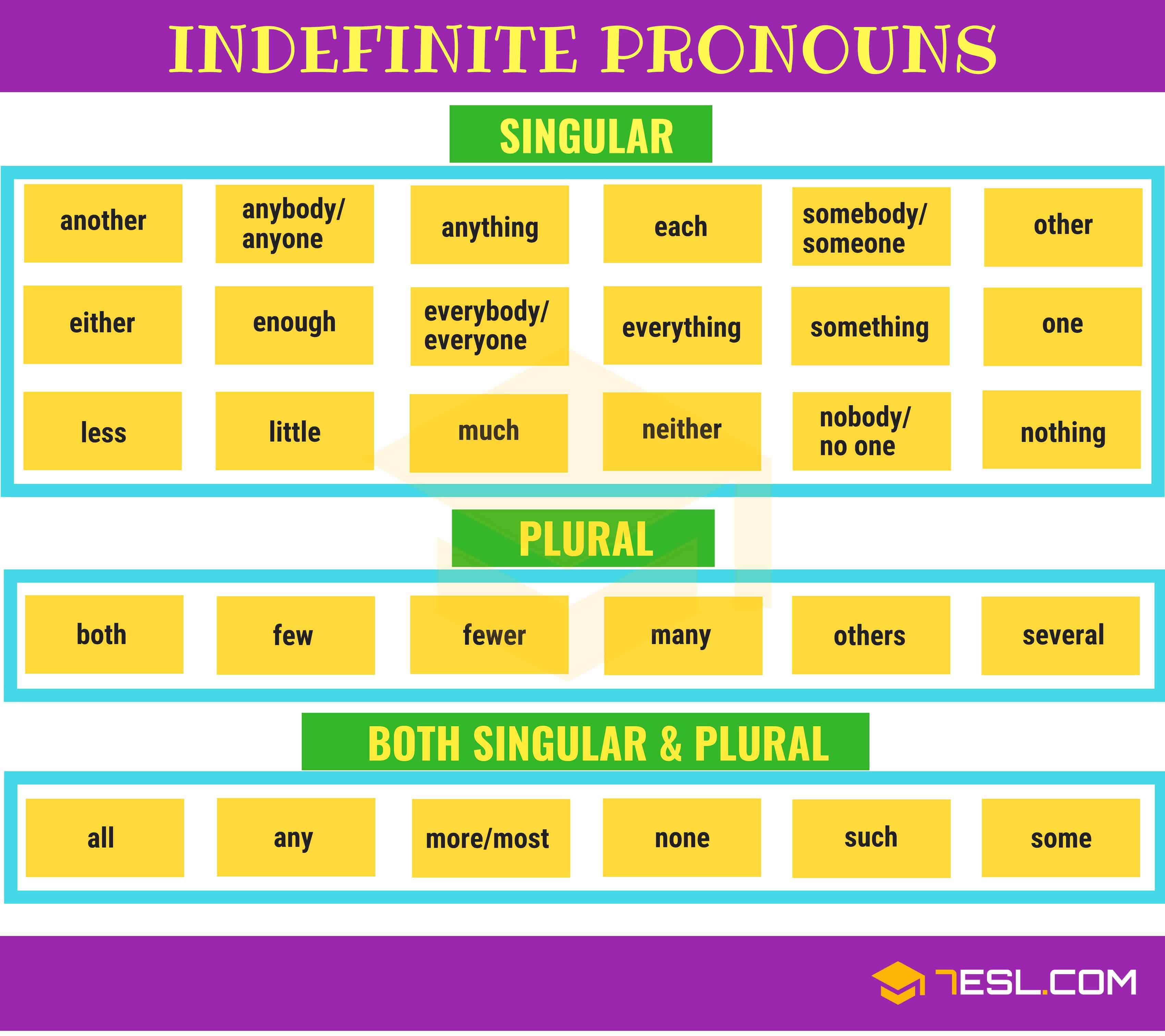 This type of pronoun can be used as a way of giving additional information within a sentence, pronouns in this category are that, who, which, whom…

A relative pronoun is a pronoun that relates to the word that it modifies and is not specific. In English, relative pronouns are who, whom, which, whose, and that. They refer back to people or things previously mentioned, and they are used in relative clauses.

The intensive pronoun is used as a reference to another pronoun or noun in the same sentence as a way of emphasizing it.

An interrogative pronoun is used in a question, the words within the category are who, which, where, how and what.

The reciprocal pronoun is used to show an action or feeling which is reciprocated, words in this category are one another and each other.

Learn the list of all pronouns in English with different types.

3) Reflexive pronoun list: myself, yourself, himself, herself, itself, ourselves, yourselves, themselves.

4) Intensive pronoun list: myself, yourself, himself, herself, itself, ourselves, yourselves, themselves.

5) Possessive pronoun list: mine, yours, his, hers, ours, yours, theirs.

7) Indefinite pronoun list: another, anybody/ anyone, anything, each, either, enough, everybody/ everyone, everything, less, little, much, neither, nobody/ no-one, nothing, one, other, somebody/ someone, something, both, few, fewer, many, others, several, all, any, more, most, none, some, such.

8) Interrogative Pronoun List: who, whom, which, what, whose, whoever, whatever, whichever, whomever.

As with all types of grammar, there are rules surrounding the use of the pronoun. Let’s take a look at these now.

1) If the pronoun is being used as a subject it is known as a subject pronoun and often appears at the beginning of a sentence, although this is not always the case. An example of this would be She went to the shop.

The words he, I, she, we, whoever, they, it etc are all subject pronouns,

2) Secondly, a subject pronoun can be used if they are renaming the sentence subject, in this case, they always come after to be verbs, these might be verbs such as were, am, are, is, etc. An example of this would be That is she or This is him talking.

3) Another rule is that if the word who is being used as a pronoun to refer to a person, it will take the form of the verb to which that person corresponds, this might sound strange as this rule is not always followed but an example might look like this It is I who am going to town.

5) When a possessive pronoun is used, the use of an apostrophe is never required.

6) When using the pronouns which, that, and who you should use either a singular or plural verb depending on what the pronoun is referring to. For example, look at the following sentence.

You can see that the verb like has been modified to become plural when the pronoun who refers to two people as opposed to one.

Gender pronouns exist in a binary system: male or female. In this system, he/him/his or she/her/hers are pronouns used to delineate gender. These pronouns occur in the 3rd person singular.

Who vs. Whom (Subject and Object Pronouns)

Who functions like other subject pronouns: I, we, she/he, and they. In contrast, whom works like other object pronouns: him, us, me, her, and them. Generally, people do not get bewildered by the object use of pronouns. Object pronouns come after a modifying verb or preposition. For this reason, they are easier to identify. For example:

You can use an alternative personal pronoun in place of who or whom to decipher the correct word to use. If the sentence works with an object pronoun you use whom. If it works with a subject pronoun then who is the word needed. In the first example, you can substitute her. The subject pronoun she would make no sense.

Choosing a singular pronoun for a plural noun

The problem many people have with pronouns is choosing the right form to replace the noun. Sometimes people will replace a singular noun with a plural pronoun or a plural noun with a singular pronoun.

Problems arise when people have to choose between the subject and object cases. You need to know which case to use when replacing a noun. Otherwise, your sentence will not be grammatically correct.

Subject pronouns represent a noun performing an action. In contrast, an object receives the action performed by the subject.

You would use the object case because it is part of a prepositional phrase.

You can also use reflective pronouns for emphasis; however, it not commonly used. For example, I myself went to the store. This example highlights the fact the person when to the store alone. 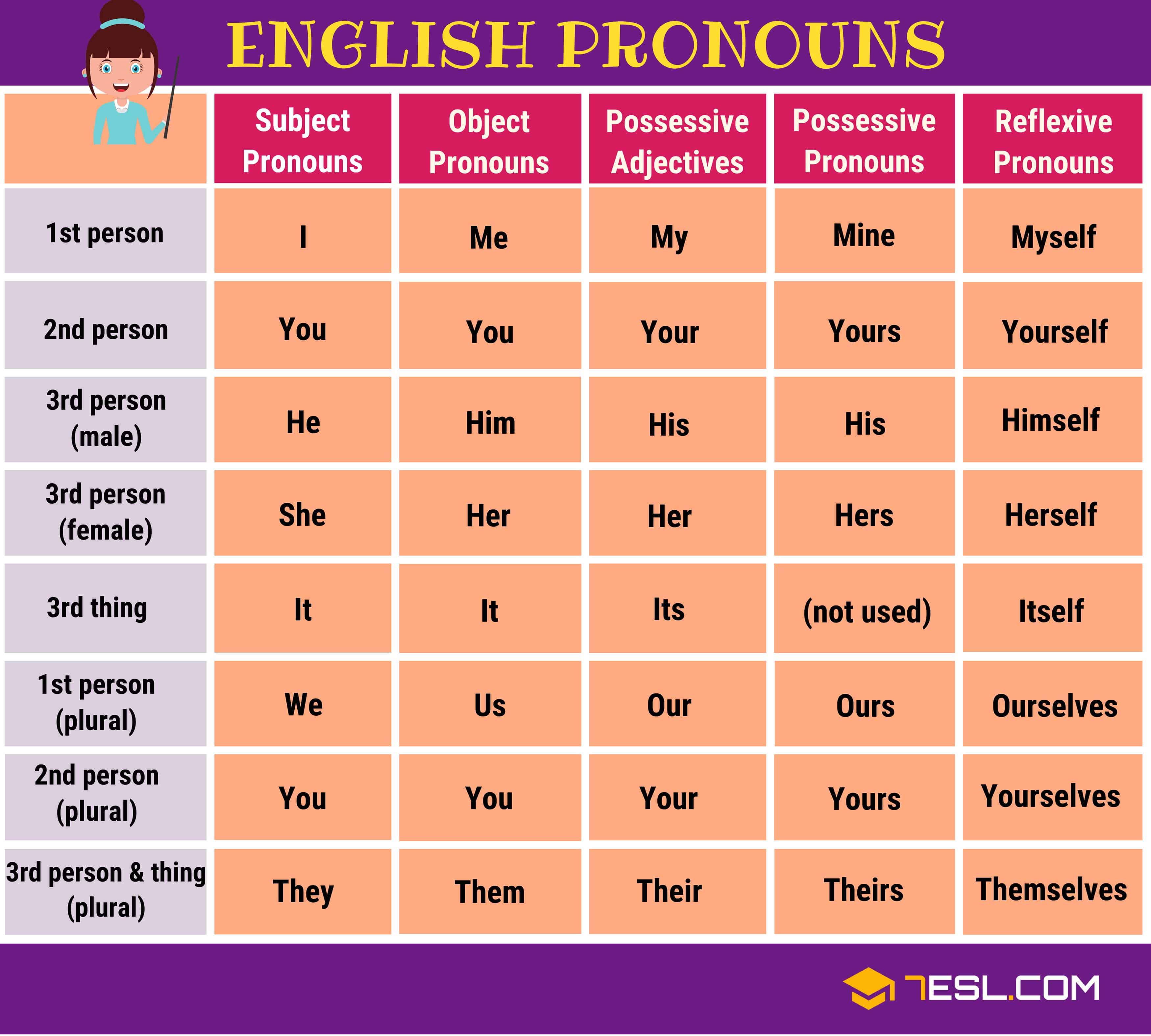 Pronouns are words which are used as a replacement for a noun and are commonly seen throughout the English language. There are various types of pronouns and certain rules that must be followed in order to create a grammatically correct sentence.

Select the correct pronoun in each question.

Circle the pronouns in the sentences below.

So much ofeffort & research put in ! Thanks a lot !

Good baby how are you?

Good want to be friends.

good what about you

great work! Is it possible to publish it also in ascii text? That would help NLP a lot (hoping this does not contain too much incorrect English 😉

There are infinite pronouns!

:/ Nobody
Reply to  yeet

Tiktok: Charlidamelio
Reply to  :/ Nobody

Are question words pronouns ?? Who, What, Where ?

Who is a pronoun. The other two are not.

What do you mean ❓