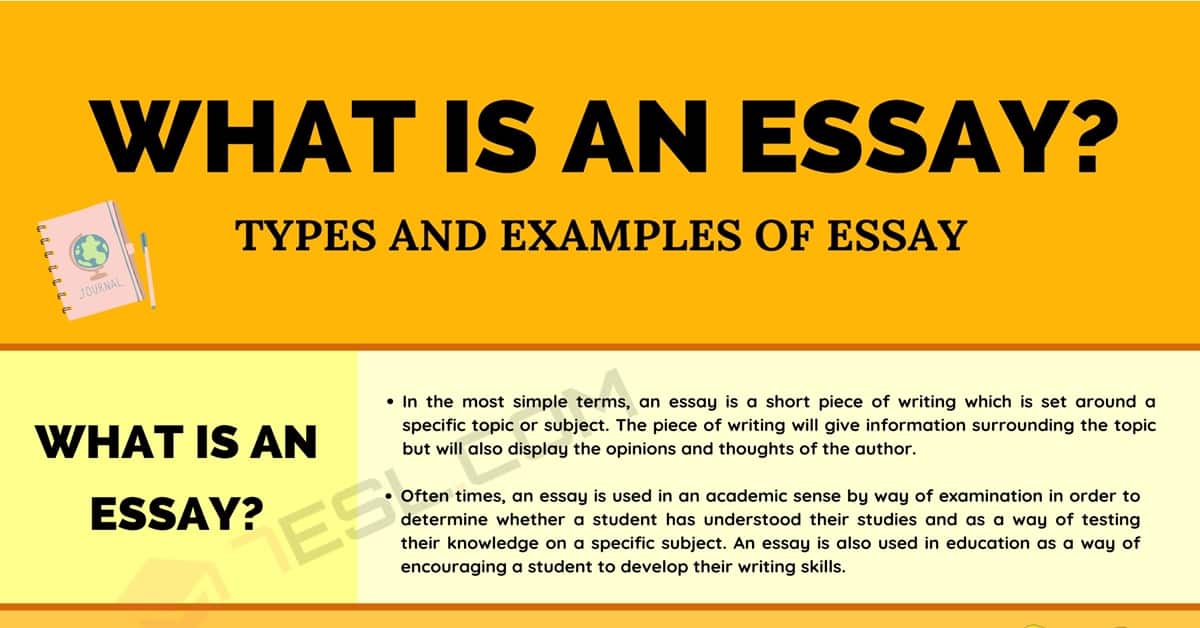 There will be many times during your life where you might be asked to write an essay. This can be an intimidating prospect, especially if you are not clear on exactly what an essay is and how it is meant to be written. In this article, we are going to be looking a little more closely at what an essay is and what it’s purpose is as well as looking at the various types of essay. We are also going to be looking at some examples to give us a further understanding on the subject.

What Is An Essay?

In the most simple terms, an essay is a short piece of writing which is set around a specific topic or subject. The piece of writing will give information surrounding the topic but will also display the opinions and thoughts of the author.

Often times, an essay is used in an academic sense by way of examination in order to determine whether a student has understood their studies and as a way of testing their knowledge on a specific subject. An essay is also used in education as a way of encouraging a student to develop their writing skills.

When it comes to writing an essay, there is not simply one type, there are in fact, quite a few types of essay and each of them have their own purpose and function. We are now going to take a look at each of these in a little more detail.

A narrative essay is one which details a story, often times from a particular point of view. When writing a narrative essay, you should include a set of characters, a location, a good plot and a climax to the story.

You will use the plot as a way of detailing events within the story and whilst these are commonly in time order, you may feel free to time hop and include flashes from history or the future.

It is vital that, when writing this type of essay you use fine details to do allow the reader to feel emotion and use their senses but also give the story the chance to make a point. The point of the essay should be mentioned early on, preferably in the opening line, but if not certainly within the introduction paragraph. You should also write this type of essay in either the third or first person and unlike a creative writing story, should always be based around fact. Let’s now take a look at an extract from a narrative essay, this is from A Ticket To The Fair written by David Wallace Foster.

It is press day today at the state fair in Springfield, Illinois and I am meant to be there in the fairground at 9am in order to get my credentials. I think of these as a small card in the band around a hat. I had never been thought of as press until now. But my true interest in the credentials is being able to get onto the rides and into the shows for free. I have come in from the East coast, fresh and ready for one of their magazines. It isn’t clear to me why they have an interest in this state fair but I expect that the editors realise, from time to time that most of the USA live away from the coast and that they will employ someone like me to do a spot of rural reporting. I’m thinking that they had asked me to report this as I grew up here. I had never been to the state fair. In fact I have not been back here for quite some time and I cannot say that I have missed it.

A descriptive essay will describe something in great detail. The subject can be anything from people and places to objects and events but the main point is to go into depth. You might describe the item’s colour, where it came from, what it looks like, smells like, tastes like or how it feels.

It is very important to allow the reader to sense what you are writing about and allow them to feel some sort of emotion whilst reading. That being said, the information should be concise and easy to understand, the use of imagery is widely used in this style of essay. We will now take a look at a passage from a descriptive essay, this one is from The Orchestra Played On written by Joanna Lipman.

The hinge creaks as I open the decrepit case. I am greeted by flowing cascades of horsehair-the bow is a victim of the mites. It is agony when I twist my fingers to the position, but to my surprise and the surprise of my children-who were yet to hear me play- I was still able to make a sound.

An expository essay is used as a way to look into a problem and therefore compare it and explore it. For the expository essay there is a little bit of storytelling involved but this type of essay goes beyond that. The main idea is that it should explain an idea giving information and explanation.

Your expository essay should be simple and easy to understand as well as giving a variety of view points on the subject that is being discussed. Often times this type of essay is used as a way to detail a subject which is usually more difficult for people to understand, in a clear and concise manner. Let’s take a look at this excerpt from How Chinese Mothers Are Superior written by Amy Chua.

I am using the phrase Chinese mom loosely. I know of some Indian. Irish, Jamaican, Ghanaian and Korean parents who fit the bill too. I also know Chinese moms, mostly born in the west that are not Chinese moms. I am also using the phrase parents of the west loosely. These come in many varieties. That being said, even the parents of the west believe that they are strict, they’re not nearly as strict as Chinese moms. For example, my friends from the west who think of themselves as strict, make their kids play instruments for just half an hour each day. For a Chinese mom, the first sixty minutes are the easiest, it’s the second and third hours that are tough.

When writing an argumentative essay, you will be attempting to convince your reader about an opinion or point of view. The idea is to show the reader whether the topic is true or false along with giving your own opinion. It is very important that you use facts and data to back up any claims that made within the essay. We will now look at a passage from the argumentative essay titled The Flight From Conversation written by Sherry Turkle.

We have become used to this new concept being alone, together. Enabled by technology, we can be with each other as well as being somewhere else, we can be connected to anywhere we wish to be. We wish to be able to customise our life. We wish to be able to move in or out of anywhere we are as what we most value is having control over where our attention is focused. We are used to the concept of being, loyal to our own and in a tribe.

Other Types Of Essays

Whilst there are four main types of essay, there are some more, less common types. Despite not being within the main four, these types of essay are still important and each serve their own purpose. We are now going to take a look at each of these in a little more detail.

This is a type of essay which is used to define an idea, thing or concept.

This is, as its name would suggest, a simple essay which is made up from five paragraphs and can be written on any subject.

The persuasive essay is one which can be used as a way of convincing the readers of an idea. It might also be used in order to convince the reader not to do a particular thing, or indeed to do it..

This type of essay is used as a way of analysing a piece of rhetoric or a speech and looks at any rhetorical devices which have been used.

As the name of this type of essay might suggest, it is an essay which is used to analyse something. This could be a piece of writing, a movie or anything else. The idea is that the analytical essay will look at what it is analysing from various viewpoints allowing the reader to form their own opinion.

Cause And Effect Essays

When writing a critical essay, the author will be writing about a piece of literature and evaluating it. They will use the good and bad points of the piece in order to do this.

The process essay is a way of outlining or detailing a process. This is done by breaking down the process so that the readers are able to understand it and even perform the process themselves once they have read the essay.

This is a type of essay which is used as a way to synthesis various concepts in order to create a judgement on their good and bad points.

The review essay is one which looks at a piece of literature and gives a review on it based around the good and bad points within it.

The research essay is one which is written based on a research question and aims to give a specific answer to it. The author will research the subject as a way of providing an answer to the question that was posed.

This type of essay is used as way to explain any given piece of written work or literature. They can be written on a variety of types of literature such as poetry, novels or a short story. 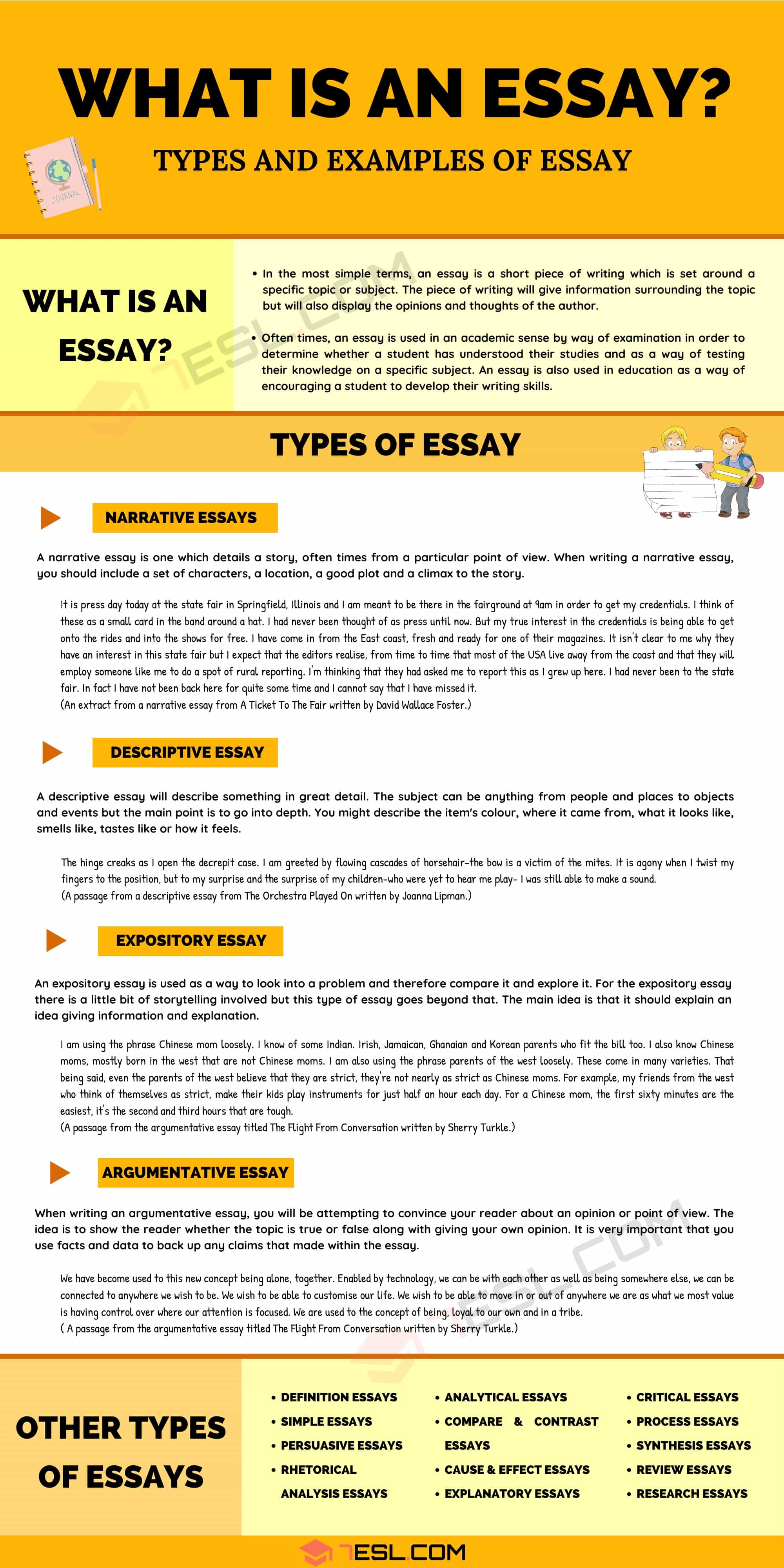 Resources for Writing a Great Essay

i have done many essays and think they are very helpful

Y’know I wasn’t aware of how brimming with information 7ESL is. Will keep your hub bookmarked. Geewillaker…maybe everything else is water under the bridge. Now is all we got, so….”Ciao for now!” 🍵🍳😽🌻🎶

I did the essays thay are helpful