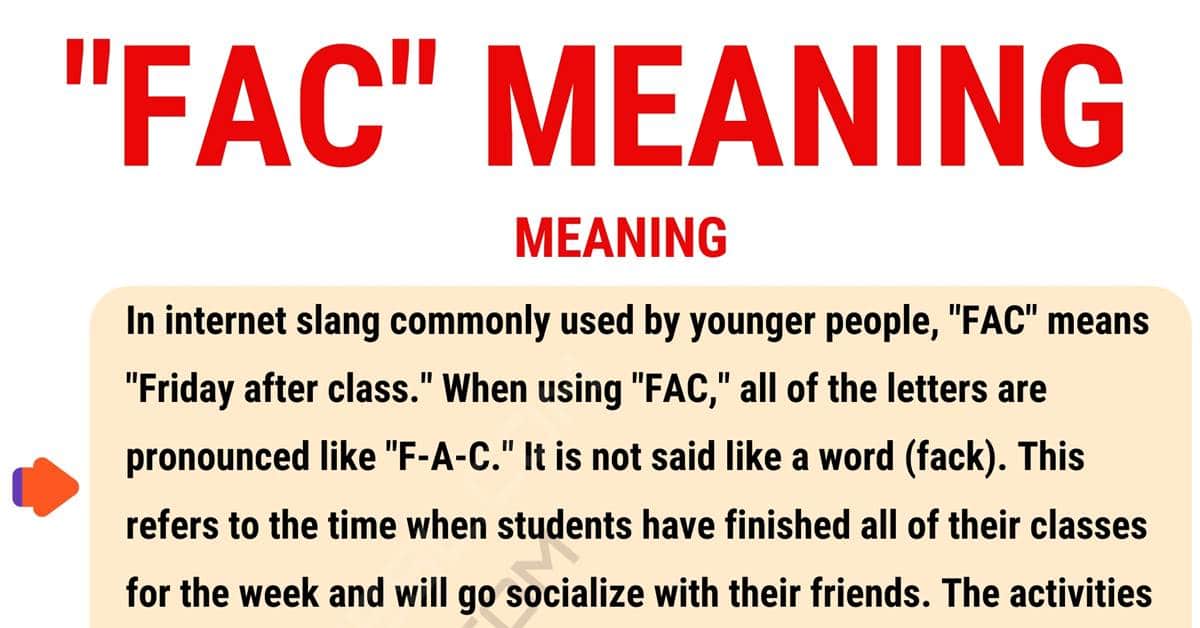 The term “FAC” is an acronym that can have many different meanings. The exact meaning it is supposed to carry will change depending on who is using it and in what situation. In this lesson, you will learn how to use this acronym with example conversations.

What Does FAC Mean?

In internet slang commonly used by younger people, “FAC” means “Friday after class.” When using “FAC,” all of the letters are pronounced like “F-A-C.” It is not said like a word (fack). This refers to the time when students have finished all of their classes for the week and will go socialize with their friends. The activities students may participate in depend on what they do for fun.

The exact origin of this term may be unclear, but research shows that the term “Friday after class” has been around since at least 1999 (and it has probably been around longer than that). The bars that serviced the students at Iowa State University created drink specials for Friday afternoon. This led to many students going to bars to chill out and kick off the weekend. Many would start the party here in the afternoon and then find something else to do in the evening.

Because “FAC” is an acronym, there are many other meanings. Similar to “Friday after class,” it can also mean “Friday afternoon club.” Other meanings of “FAC” includes “Fanart central” (a popular forum) and “forwarding agent cachet,” It is also used by NASA as an abbreviation for “facility.”

This word is most likely to be used by college students and their friends who are old enough to drink.

Here are some examples of how people us “FAC.”

This example shows two students talking in a text conversation. The two students started off discussing how their midterm exams went. Student 1 asks Student 2 if he is free. Student 2 is at the “FAC.” This means that he is currently at bar the enjoying drink specials and socializing with others. Student 1 was a bit upset when he didn’t receive an invitation to go, but will join his friend at the bar.

The second example is a conversation between the same students on Saturday morning after a night of partying. Student 1 checks in on Student 2 to see how he’s doing. Student 2 states that he’s a little slow (and probably hungover). He says that the “FAC” gets him every time. This means that he usually starts partying on Friday afternoon and drinks a little too much.

Here are some related words to FAC