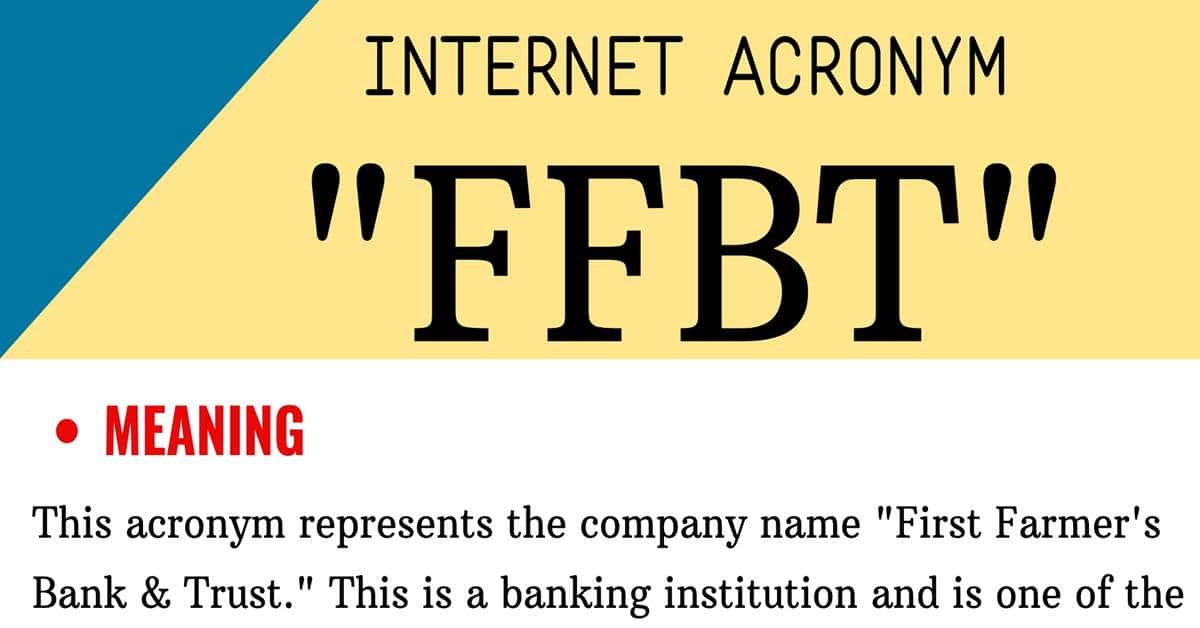 You may not hear or see the acronym “FFBT” unless you live in one particular area of the U.S. If you have heard or seen this acronym being used and were curious to know what it means, then you have come to the right place. Here you will find out the meaning of this acronym and the phrase it represents. You will also see information regarding its origin if there is any to be found. Additionally, you will also have the opportunity to read through some example conversations for a stronger understanding from seeing the acronym used in context Finally, you will see some suggested synonyms, provided that a synonym can be used.

This acronym represents the company name “First Farmer’s Bank & Trust.” This is a banking institution and is one of the largest privately-owned banks in the Midwest serving the states of Indiana and Illinois.

The first banking institution associated with First Farmers was established in the 1850s under the name Mark Tully’s Exchange Bank. Mark Tully is the man credited with the initial roots of this well-known banking institution. Over the next 50 years, the institution grew to become one of the largest banks in the Midwest through their superior customer service and practice. Since the early 1900s, the institution has gradually expanded to many other branch locations in Indiana and Illinois. Today the bank is able to serves 60,000 customers, employees 400 associates, and has approximately $1.7 billion in assets. Owners and customers alike contribute its success to providing advanced banking options while still offering old-fashioned service.

This acronym also represents the French title “Fédération Française de Ball-Trap et de Tir a Balle.” This title represents an association in France for the enthusiasts of clay pigeon shooting, also known as ball, trap, or skeet shooting in the U.S.