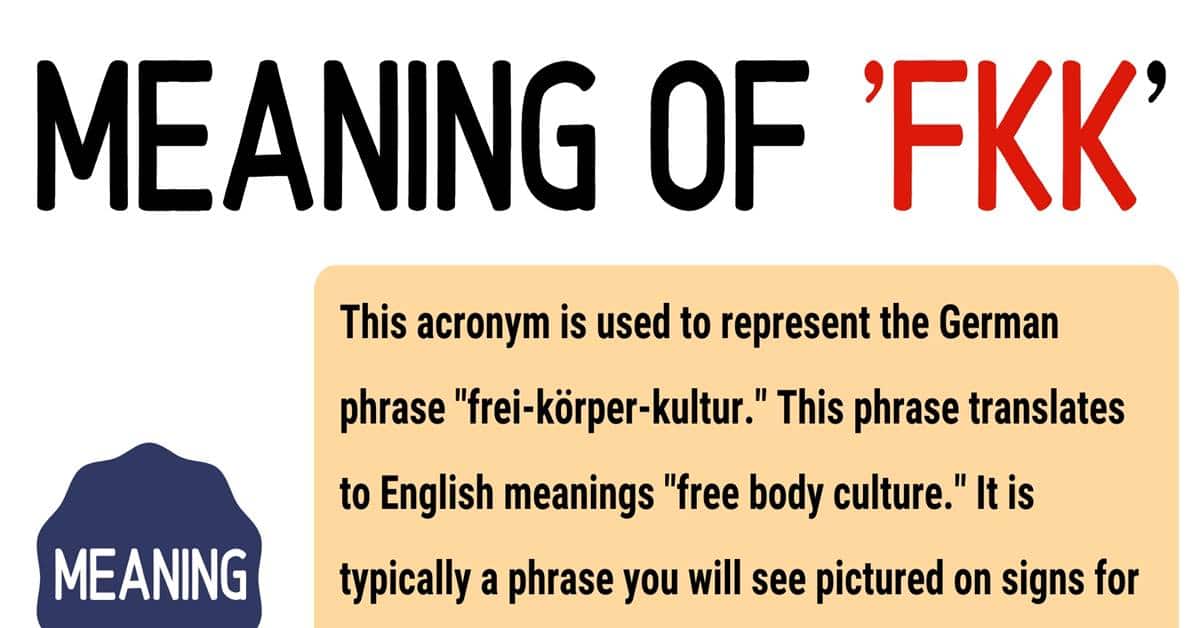 “FKK” is typically not an acronym you will see on the internet unless someone is talking about a trip to another culture or in a picture of some sort of sign from another country, more specifically European countries. Here you will find the meaning of the phrase this acronym represents, information regarding its origin and some other meanings if there are any to be found. You will also see some conversation examples showing how this acronym is used correctly in conversation and to help you better understand the term. Lastly, you will see some words or phrases that are synonymous with this acronym and the phrase it represents.

What Does FKK Mean?

This acronym is used to represent the German phrase “Frei-körper-kultur.” This phrase translates to English meanings “free body culture.” It is typically a phrase you will see pictured on signs for clubs, saunas, and beaches where it is acceptable to swim, sunbathe, or participate in other activities without wearing clothing in public areas.

The German phrase that this acronym represents has been used since at least 1898. It defines a sub-culture in the country of Germany which people believe it is acceptable to be nude and perform daily activities in this matter to be closer to nature. The choice to be nude and participate in these activities or live in this manner has nothing to do with sexuality. It is simply done so that people can be closer to nature and completely free.

There are quite a few other things that this acronym can represent. Some of these are “Fehrbelliner Karneval Klub,” “Feuer Knueppel Krug,” “Flickr Klub Karlsruhe,” “Fauler Kiffer Klan,” and “Fort Knox Kentucky.” These are just a handful of the things that can be represented by this acronym. There are several more, but too many to list them all here. However, most times the acronym is mostly used to represent the phrase mentioned above.

There are several synonyms that you could use to replace the phrase that this acronym represents. Some of the other words or phrases you could use include: nudist, without clothing, naturalist