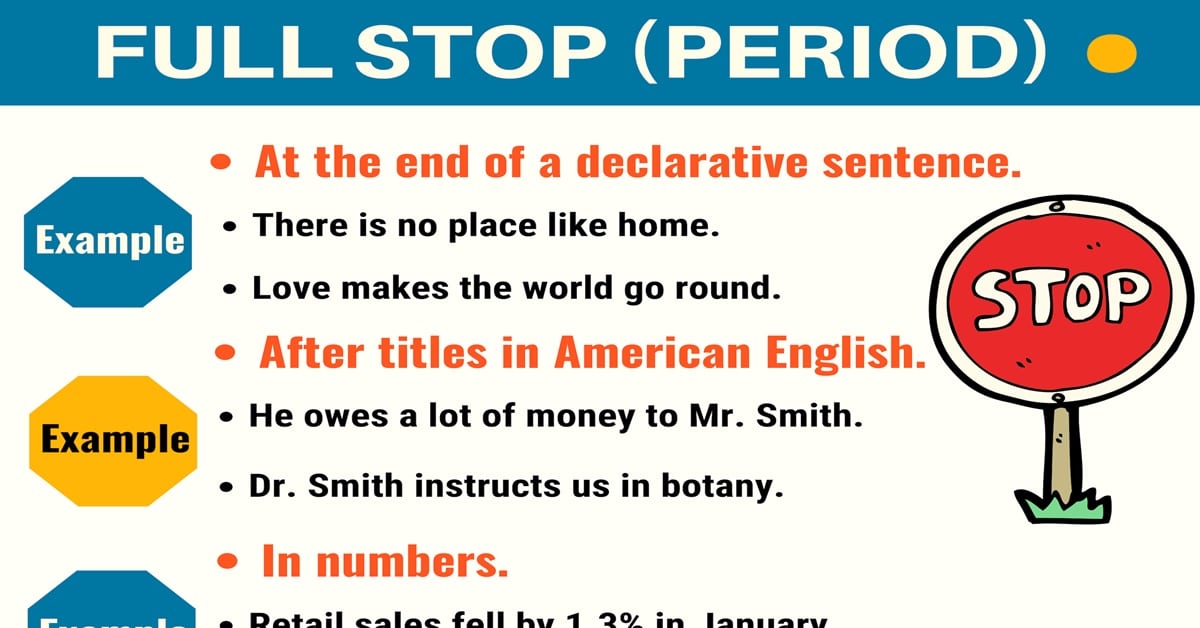 A full stop (or period, depending on where you are from in the world) is a simple punctuation mark that we use every day in our writing without thinking about it. Most people just use them without ever stopping to think about the real reason for them, so this can often lead to people using full stops when it isn’t strictly necessary, or not using them when they are. With so many punctuation options available to writers, it’s hard to know when to use full stops or something else. Thankfully, this guide will help clear that up for you and highlight some common mistakes for you to be aware of in the process!

What is a Full Stop (Period)?

A full stop is mostly used at the end of a declarative sentence, or a statement that is considered to be complete. This punctuation mark is also used following an abbreviation. A full stop can also be shown at the end of a group of words that don’t form a typical sentence.

In American English, the full stop is most often called a period. Besides the difference in name, there are only subtle differences in the usage of the full stop or period. For example, individuals from the United Kingdom are much more likely to write their country in its abbreviated form as ‘UK’. In the United States, however, it is much more likely to be written as ‘U.S.A.’.

In a similar vein, American English is much more likely to write somebody’s title with a period following it, such as ‘Mr. Jones’ but in British English, it is much more likely to see it written as ‘Mr Jones’. Besides these subtle differences though, the period or full stop are used in very similar ways, especially in declarative sentences.

We should always use periods or full stops at the end of sentences that simply make a statement. If you wish to show emphasis or excitement, then an exclamation point should be used. If the sentence is a question, then we should use a question mark. Remember, these three punctuation marks are the only way to end a sentence, so if you know how to use all three of them correctly, you won’t go far wrong.

When to Use a Full Stop

As we’ve already covered, there are different ways in which we can use a full stop. Below we’ll look at this in slightly more detail, and hopefully, you’ll be better able to see why we use full stops in that way. We’ll also cover some more instances that we haven’t yet covered.

Remember though, this is common in American English, but much less so in British English. Here are some more examples:

As A Decimal Point

We also use full stops as a decimal point in numbers when we are trying to show a number with a decimal. For example:

When we shorten words or abbreviate them, we most often use full stops to show that we are omitting some letters within a word. We’ve already discussed the differences in British and American English (UK vs U.S.A.) but there are some situations that abbreviations and full stops are used in both countries. For example:

When Not to Use a Full Stop

Questions should always be finished with a question mark. You may also use question marks to show surprise or uncertainty at the end of a statement, but this is done stylistically for tone. Here are the two ways in which a question mark should end the sentence rather than a full stop:

A full stop, question mark, and exclamation point are the only three punctuation marks that should end a sentence. Decide which one better suits the sentence you have written and you’ll be fine.

If we are using quotation marks in a piece, people can mistakenly place the period in the wrong position. In the following examples, we’ll show you some common mistakes and then show you the correct way to write it:

In this case, the period should always come inside the quotation marks when the quote is ending the sentence.

Similarly, people make mistakes with parentheses and periods too. We’ll show you the common mistakes and the correct way to write them below:

Examples of Using Periods in Sentences

At the end of a declarative sentence.

After titles in American English.

Showing the end of an unconventional sentence. 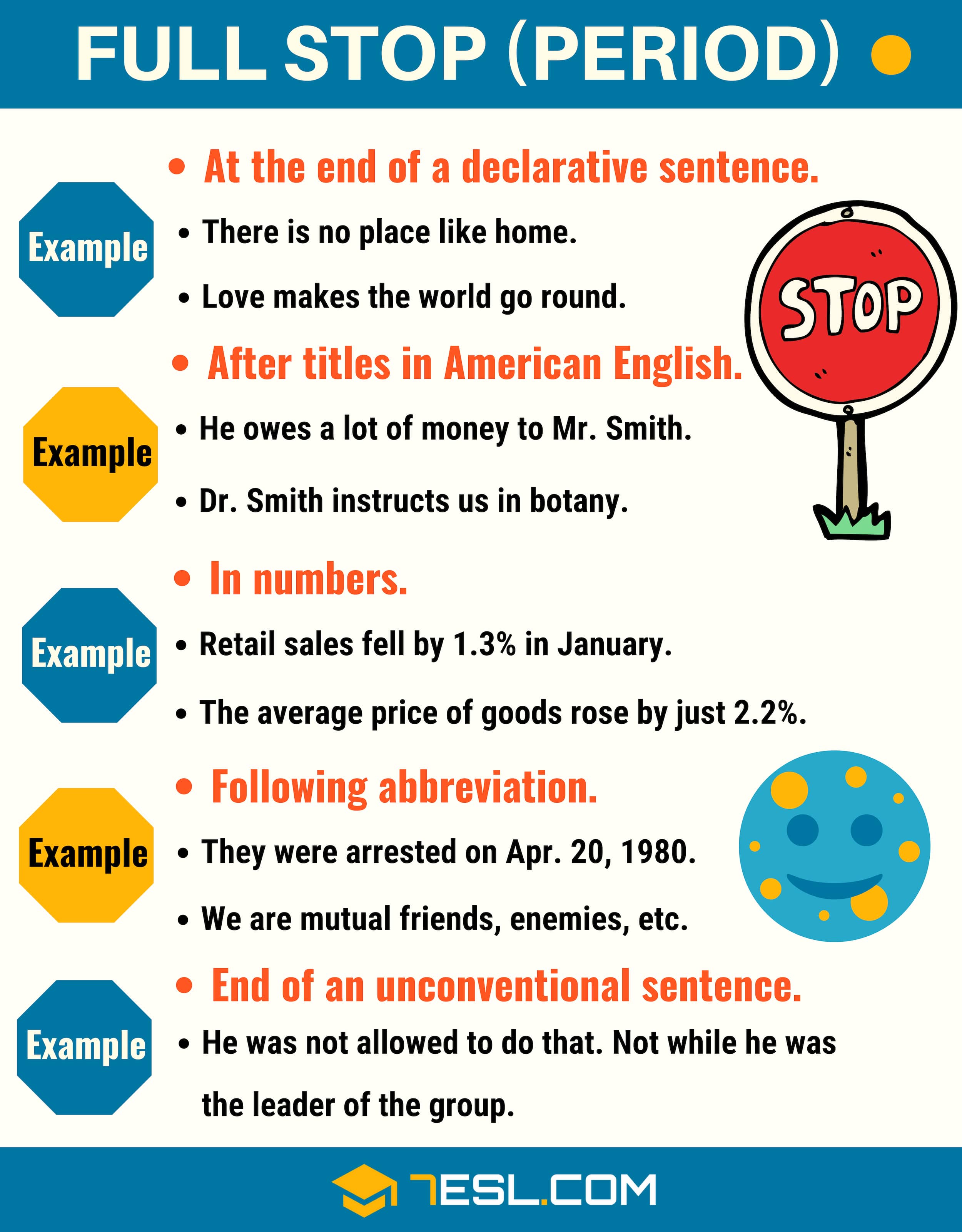 Learn the differences between a full stop, a question mark, and an exclamation mark in English with rules and examples. 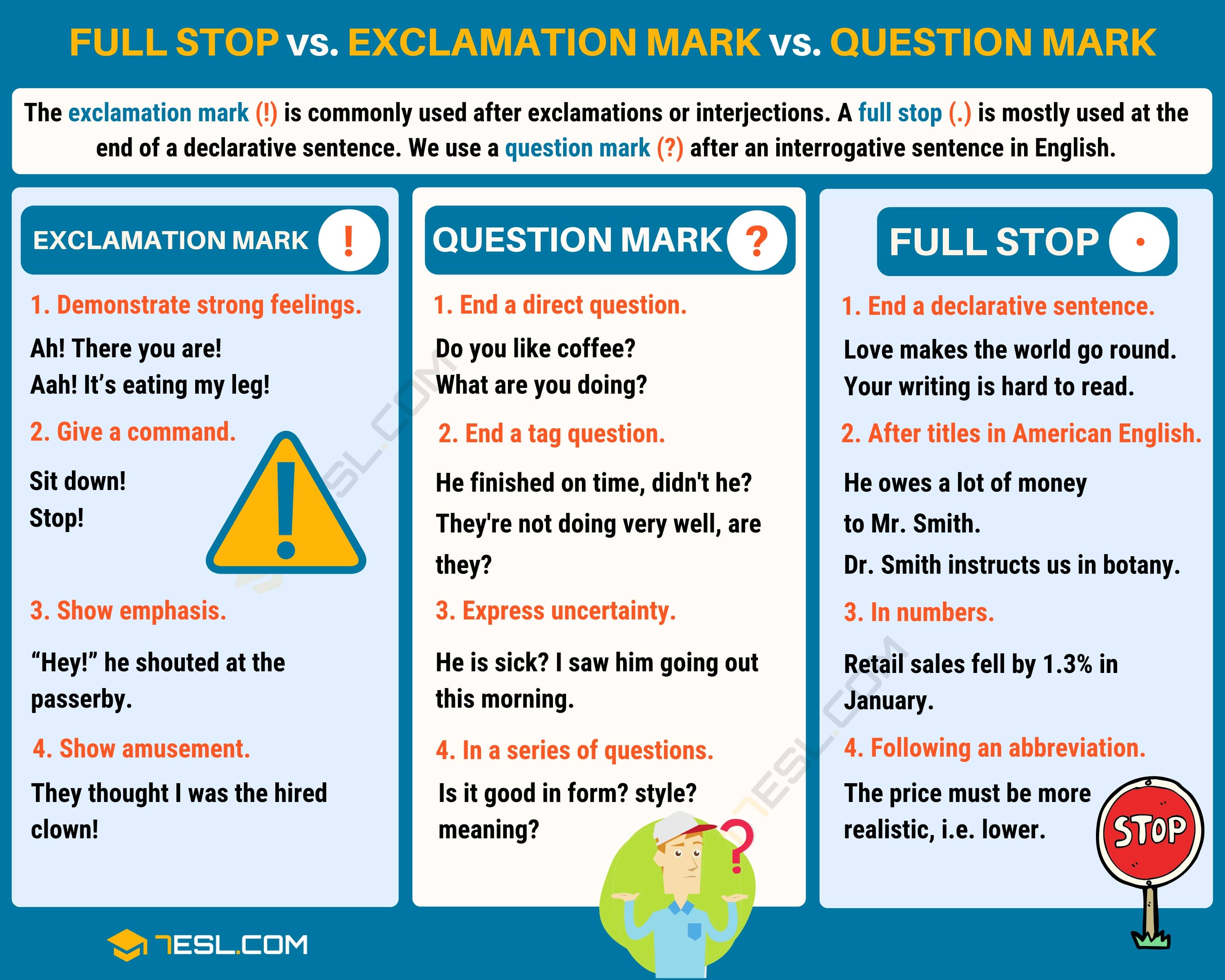 Below, we’ll test your new knowledge of full stops. Decide whether the following sentences are correct or incorrect and then decide how you would write them correctly if you think they are incorrect:

1.Incorrect. The sentence is not a declaration, but a question, so a different punctuation mark should end the sentence.

Do you think we can make it on time?

2. Correct. When parentheses do not encompass the entire sentence, we should place a period outside the parentheses.

3. Correct. A simple declarative sentence that just makes a statement should always be finished with a full stop.

I hope you don’t have no friends and emo likes boys that are cutter then you no one does not what to be your boyfriend if are a boy are you yes or no question idoit.

its rallye helps me sucha good for any one

i still dont get it?

i still dont get it

I love this what hu munk