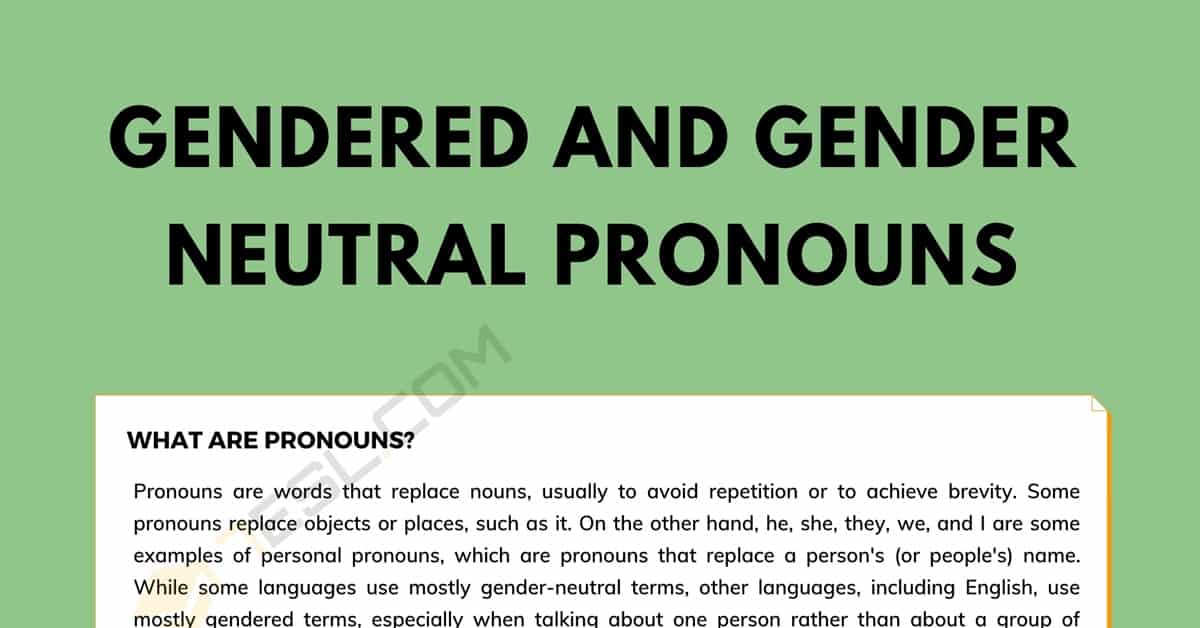 What are gender pronouns and gender-neutral pronouns & in which situation should we use these pronouns? Let’s take a look to find out the definition and usage of gender-neutral language with many useful examples and ESL image.

Pronouns are words that replace nouns, usually to avoid repetition or to achieve brevity. Some pronouns replace objects or places, such as it. On the other hand, he, she, they, we, and I are some examples of personal pronouns, which are pronouns that replace a person’s (or people’s) name. While some languages use mostly gender-neutral terms, other languages, including English, use mostly gendered terms, especially when talking about one person rather than about a group of people. Since English doesn’t officially gender most objects, this discussion of gendered and gender-neutral pronouns will focus on personal pronouns.

Gender pronouns are pronouns that reflect a person’s gender.

Sometimes, we don’t know a person’s gender. Sometimes, a person identifies as non-binary (neither male nor female, or both) or gender fluid. Though for some, having the wrong gender pronoun used isn’t a big deal. For many, being misgendered is painful or even traumatic. As a result, there has been a movement toward using more gender-neutral pronouns, including both pronouns that already existed and new ones created for evolving presentations of and dialogue regarding gender.

You’re probably already familiar with pronouns used for groups of people with unknown genders or with multiple genders, such as a group made up of men and women. These are very commonly used in those situations:

This is where gender-neutral pronouns get a little trickier in English.

These are fairly traditional pronouns and more accepted in certain situations, but they’re not perfect. As a result, people have come together to create words more like he/she, his/hers, and other gender pronouns, just without the gender. The intent is inclusion that’s similar enough to the status quo to work with the rest of the language while being different enough to fit the people who do not fit within gendered terms.

Unfortunately, there’s not yet a consensus as to whether any of the following pronoun sets is the “winner,” or the pronouns most likely to stick around for gender neutrality. The following, though, are pronouns you may consider using for yourself or to address others. Note that only the more common are listed, as an exhaustive list would prove endless.

These pronouns may sound strange if you haven’t heard them before, but if there’s ever a consensus on which pronouns work best, the chosen gender-neutral pronouns will likely become familiar very quickly.

When to Use Gender Pronouns or Gender Neutral Pronouns

Once you know all these pronouns, it’s important to know when to use which pronouns. Unfortunately, it’s not always straightforward, but there’s one way that will generally work for figuring out what pronouns to use: ask the subject of your pronouns what their pronouns are. This is a fairly common question in some circles, including in socially liberal websites and LGBTQIA+ communities. Increasingly, people across social media are using pronouns in their bio, which makes it so that you don’t even have to ask how they’d like to be addressed.

This monstrosity will never be a thing! GENDER THEORY ONLY SEEKS TO DESTROY SOCIETY!

How is respecting someone’s gender identity nothing but a most basic kind thing you could ever do as a fellow human? It’s not hard to respect a person’s pronouns