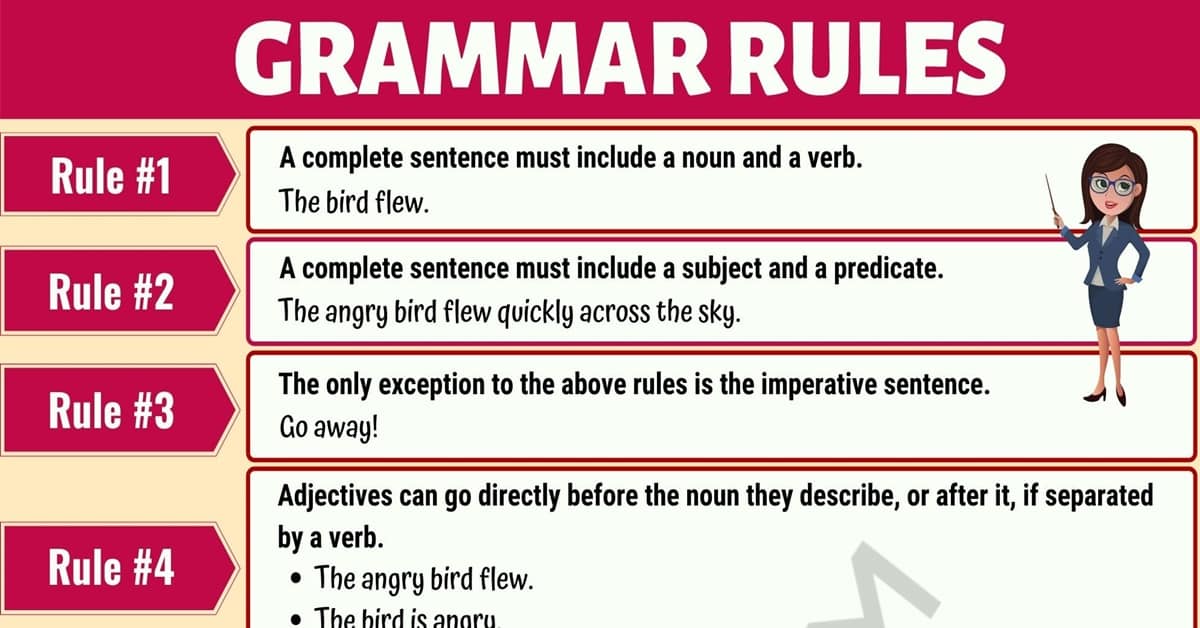 Here we’ve compiled 18 grammar rules on sentence structure which build up from definitions of grammatical terms to practical rules and tips. It can be a lot to learn all at once, but stick with it. By the end, you will have a stronger understanding of how English works, and be able to better communicate your thoughts clearly.

The Importance of Learning Grammar

Grammar can be one of the most frustrating parts of learning a language. Sometimes it feels like you’re expected to memorize countless random rules, and terms that you have no use for. But with the right approach, the patterns and logic of grammar start to reveal themselves – many of the rules actually build off of each other.

That’s essentially what grammar is: the system of rules which structure a language. Grammar is the logic behind the order and choice of our words. With proper grammar, the relationship between the words we use becomes clear, and we can communicate without creating confusion. Even if you choose not to always follow them, knowledge of these grammar rules will help you handle miscommunication.

How are English sentences put together? Depending on your native language, you may find English sentence structure simple or quite difficult. Some languages put sentences together much like English does, but others are very different in this regard.

Grammar rule #1: A complete sentence must include a noun and a verb

A noun is a person, place, thing or idea. A verb is an action word.

In this sentence, the noun is “bird” and the verb is “flew”.

Grammar rule #2: A complete sentence must include a subject and a predicate

The subject refers to the person, place or thing which the sentence is about. The predicate describes the subject, what the subject is doing, or what is being done to it.

In Example 1, the subject is “The bird” and the predicate is “flew”.

As the sentence gets more complicated, it becomes more clear how subject and predicate are different from noun and verb.

In this sentence, the subject is “The angry bird” and the predicate is “flew quickly across the sky”.

Grammar rule #3: The only exception to the above rules is the imperative sentence

This is a sentence type in which the speaker instructs or commands the person to whom they are speaking. In this type of sentence, only the predicate is required.

This is a complete sentence, with a predicate, and no subject.

In an imperative sentence, the subject is implied, because it is the person being instructed.

For instance, Example 3 could be rewritten as follows.

The subject “you” in Example 4 is implied in Example 3, so it isn’t necessary to include.

Grammar rule #4: Adjectives can go directly before the noun they describe, or after it, if separated by a verb

An adjective is a word which describes a noun.

When the adjective is in the subject part of the sentence, it goes directly before the noun.

Like in Example 2, the subject here is “The angry bird”, and it includes both the noun “bird” and the adjective “angry”, which describes it.

But when the adjective is the predicate part of the sentence, it may go after the noun.

In this example, the subject is “The bird”, and the predicate is “is angry”. The predicate consists of the verb “is” and the adjective “angry”.

Compound subjects are created through the use of conjunctions.

Conjunctions are connecting words, like “and”, “or”, and “but”.

Grammar rule #7: A compound sentence includes more than one subject or predicate

This example of a compound sentence does not include a compound subject or compound predicate. Instead, it consist of two independent clauses.

Grammar rule #8: An independent clause consists of a subject and a predicate, like a complete sentence

Independent clauses are called “independent” because they do not “depend” on any additional words in order to become complete sentences.

A complete sentence must start with a capital letter and end with punctuation.

In this example, the independent clause “the plane flew” became a complete sentence without any additional words. All that it required was capitalization and punctuation.

Dependent clauses often contain words like “because”, “which”, “that”, or “when”. In fact, it is often the addition of these words which causes the clause to be “dependent”.

Grammar rule #10: The direct object is the noun being acted on by the verb

None of the above examples include a direct object. In each example, the nouns in the sentence perform the verbs in the sentence. For instance, in Example 11, the plane performed flight and the bird performed singing.

But many verbs have objects as well as subjects. The object of the verb is the noun which the subject is directing the verb towards.

In this sentence, the direct object of the verb “ate” is “seeds”. The “seeds” are the noun which “the bird” (the subject) is eating. Without the seeds, the bird would be eating nothing. In other words, the bird is “acting on” the seeds.

It’s not always necessary for the words to be in this order. In fact, this sentence can be formed without the word “to” and still have the same meaning.

Grammar rule #12: When written in passive voice, the object of the verb becomes the subject of the sentence

All of the above examples were written in active voice. This means that the order of the sentence is: Subject – Verb – Object. Example 12 is a simple sentence in this structure.

Passive voice refers to phrases where the Object which the Verb is acting on replaces the Subject in the sentence’s structure. The following example is an inversion of Example 12.

If we take “eaten” to be the verb of this sentence, then the order of words is Object – Verb – Subject. In this example, the helping verb “were” comes between the Object (seeds) and the Verb (eaten) which is acting upon it.

Grammar rule #13: Conjugations of the verb “to be” are essential to passive voice

Many words are actually versions, or conjugations of the verb “to be”. “Is”, “are”, “was”, and “were” are all versions of it, in addition to words you might expect, like “be”, “being” and “been”.

When a conjugation of “to be” comes before another verb, it is usually an indicator of passive voice. The following example demonstrates how other conjugations of “to be” could function as the helping verb in Example 15.

In each of the above example sentences, the meaning is changed by the choice of helping verb. But in all of them, the relationship between the object, subject and verb remains the same.

Grammar rule #14: Sentences written in passive voice can omit the subject of the acting verb

For instance, Example 15 could be rewritten as follows.

Technically speaking, this is because “seeds” is actually the subject of the helping verb “were”.

Grammar rule #15: In passive voice, the subject of the acting verb is connected by a prepositional phrase

Prepositions are words which clarify questions like “where?”, “when?” or “which?” For instance:

The above sentences utilize the prepositions “under”, “after”, and “which”.

In Example 15, the prepositional phrase “by the bird” clarifies the subject of the verb “eaten”.

When prepositional phrases are moved to the middle or beginning of a sentence, they are separated by commas. This often happens with “which” phrases.

The prepositional phrase here, which offers additional information, comes in the middle of the sentence and is separated by commas. This is to avoid confusion around sequences such as “my mother ate seeds”.

These variations on the second sentence from Example 18 move the prepositional phrase “after lunchtime” to the beginning and middle of the sentence.

This sentence features two prepositional phrases. “Under the table” clarifies where the seeds were, and the “by the bird” clarifies the subject of the verb “eaten”.

Adverbs are descriptive words which answer the question “how?” They often end in the suffix “-ly”.

The adverb “quickly” can be moved to the beginning, middle, or end of Example 12.

Each of these sentences means the same thing. Adjectives cannot be used so freely.

Grammar rule #18: A subject compliment describes the subject of the sentence

When an adjective doesn’t come directly before the noun it describes, it is a subject compliment. It is connected to the subject by a linking verb, such as “is”.

This has the same meaning as the phrase “the green bird”, but because it has a subject and predicate, it can function as an independent clause. “The green bird” is only a subject.

Nouns can also be subject compliments.

Because dancer is a noun, it cannot be placed before the noun the way an adjective can. “The dancer bird” doesn’t make sense as a subject. But when the noun “dancer” is used as a subject compliment, it can describe the bird. 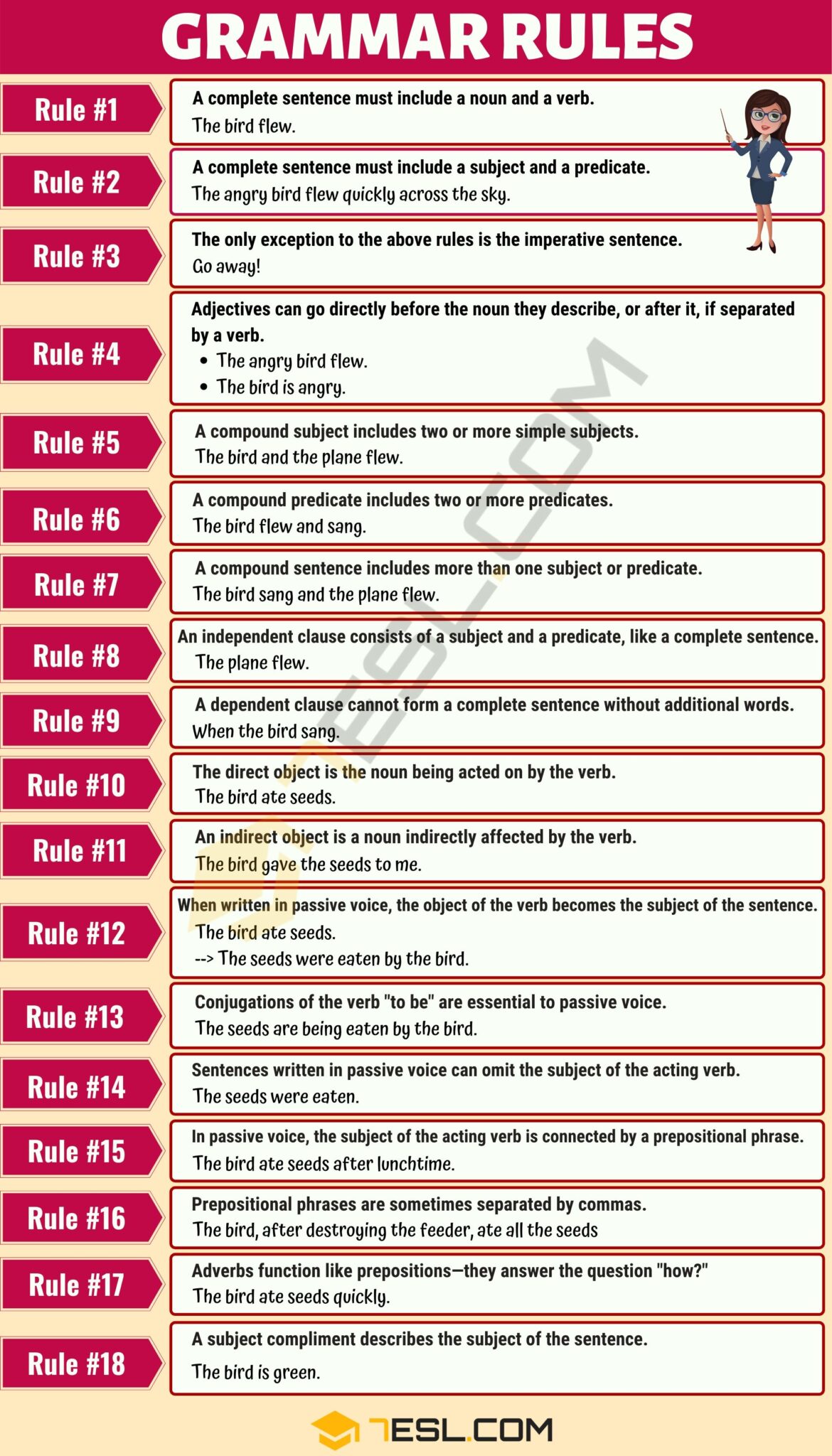 I like a piece of music that has some lyrical quality to it. There is a wonderful data base of classical music which I have not yet exhausted. There is much “modern” classical music I consider non-musical. For example, I cannot abide the use of pencils to stroke all the violins in the orchestra to change the sound. Surely the musicians playing in a major orchestra can produce any sound worth producing with a bow! I know. I sound like I could say, “I may not know much about classical music, but I know what I like.” Actually, I like… Read more »

Sir very nice information about our sites I use regularly. Sir, can you tell me how to make long sentences step by step. Plz help me.

_WHY IS WUDUU(Ablution) SO IMPORTANT_*. BismilLah. Wuduu(Ablution) is so important even in terms of health because it cleans the organs that are exposed to dirtiness and that are always in contact with things outside like hands, face, mouth, teeth, nose, head and feet. The ways through which microbes could penetrate the body are cleaned at least five times a day Alhamdulillah; thus, many diseases are prevented; the nervous system and the circulatory system of the body then functions better. Wuduu actually eliminates anger and calms the spirit. Therefore, the Prophet (sallallahu alaihi wasallam) advised a person who becomes angry to… Read more » 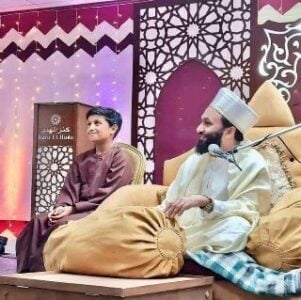 Please correct the typo in Rule # 18:
Should be “complement” instead of “compliment”