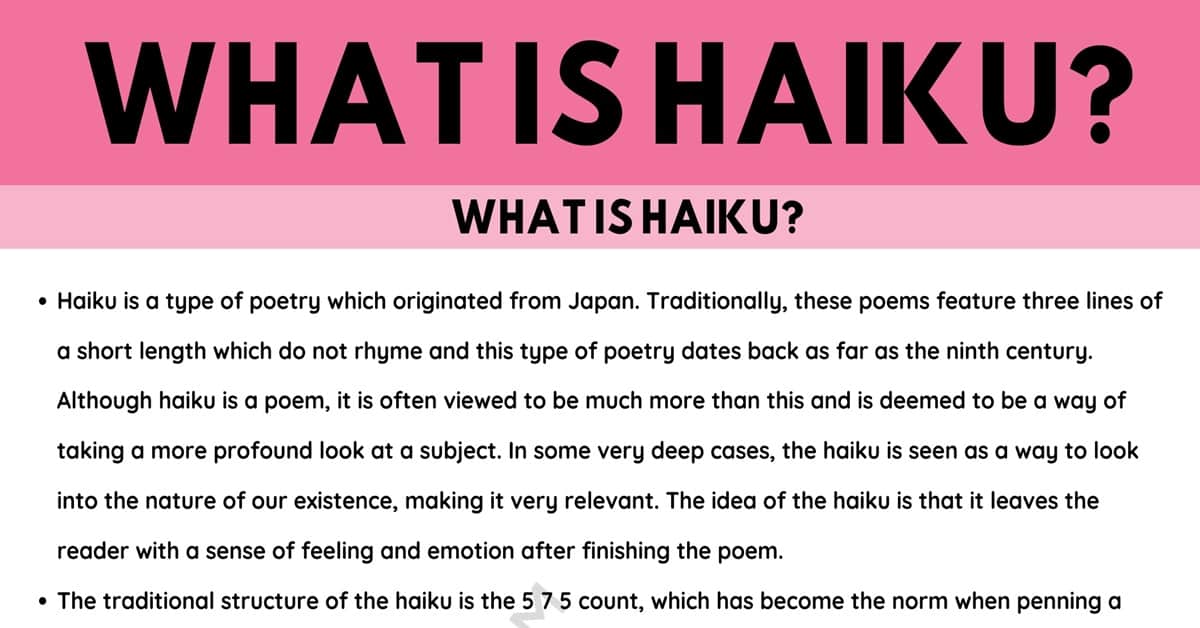 You have likely heard of the term haiku when looking at the English language, but what is it and what is it used for? In this article, we are going to explore the meaning of haiku and find out how it can be used in both spoken and written contexts. We will achieve this by looking at a variety of examples of times when haiku has been used.

Haiku is a type of poetry which originated from Japan. Traditionally, these poems feature three lines of a short length which do not rhyme and this type of poetry dates back as far as the ninth century. Although haiku is a poem, it is often viewed to be much more than this and is deemed to be a way of taking a more profound look at a subject. In some very deep cases, the haiku is seen as a way to look into the nature of our existence, making it very relevant. The idea of the haiku is that it leaves the reader with a sense of feeling and emotion after finishing the poem.

You might look at the haiku as a photograph or memory of a small period of time, this is often a great way to gain an understanding of how this type of poem works, Think about a time in your life which is highly relevant, perhaps the birth of your first child, meeting your spouse or graduation day, the haiku is a way of summing up an important moment such as these. The poem should bring about a sense of enlightenment and great understanding.

The traditional structure of the haiku is the 5 7 5 count, which has become the norm when penning a haiku, writers will adhere to this syllable count. A haiku will feature a break or pause at the end of either the first or second line and in Japanese, this is accomplished by way of a kireji word, but since this does not exist in English, it is common for a dash to be used. Quite often, the haiku will be written in a present tense and will focus on a group of associated images in the mind.

Haiku poem may be recited verbally or written down, there are many examples of this type of poem and we are now going to take a look at some of these as a way of gaining a greater understanding of how they work, Looking at these examples will give particular clarity of the 5 7 5 rule of the poems.

The frog jumps in–

The sound of water

The above haiku was written by the famous poet, Matsuo Basho, who was renowned for his ability to write a good haiku and is considered to be one of the great four haiku poets in Japanese history.

This is an example of a haiku written by another of the great poets named Kobayashi Issa. It is another great example of how one of the most common themes of haiku is nature. Reading these short poems brings the reader a feeling in regards to nature.

Following are some more excellent examples of the haiku written by the great Matsuo Basho. Again, these are haikus which focus on nature and creates a mental picture of what the writer is talking about.

Twilight in the rain

Another of the great haiku writers was Yosa Buson who lived in the 1700s and was not only a poet but also a painter. Let’s take a look at some of the haiku’s he has written.

The summer river is crossed

my sandal in my hand.

Light of a moon

The scent and colour of a wisteria

Poet Paul Homes wrote a series of haiku poems relating to the various months of the year. These are great examples of how a haiku can envoke feelings when it comes to the subject and demonstrate how this type of poem is still relevant in the modern day and age. Let’s take a look at some of this series of poems now. The first poem is about the month of January.

In the suns glory

The next example from the series of poems speaks about the month of October.

In another more modern example of the haiku poem, written by Andrew Mancinelli, the writer talks about fire.

I was on fire

The room so sombre and dark

Poet Savannah M Jones, talks once again about nature in her haiku dedicated to the season of autumn. Once again, the poem leaves the reader with a clear mental picture of what she is trying to describe and brings on an intense feeling about the season after reading.

Coolness in the air

The haiku is a type of poetry which finds its origins in Japan, many many hundreds of years ago, as far back as the 9th century. This makes it one of the oldest forms of literature that are known to man and the poems remain equally as popular today as they did way back then. There are many examples of haiku from the four great haiku writers from Japan as well as a great selection of more modern examples of this type of poem.

It is possible to speak a haiku and also to use them as a literary device, and the general idea of this sort of poem is to leave the audience with a sense of feeling at the end. The poems focus on mental imagery and follow a 5 7 5 count when it comes to the syllables. 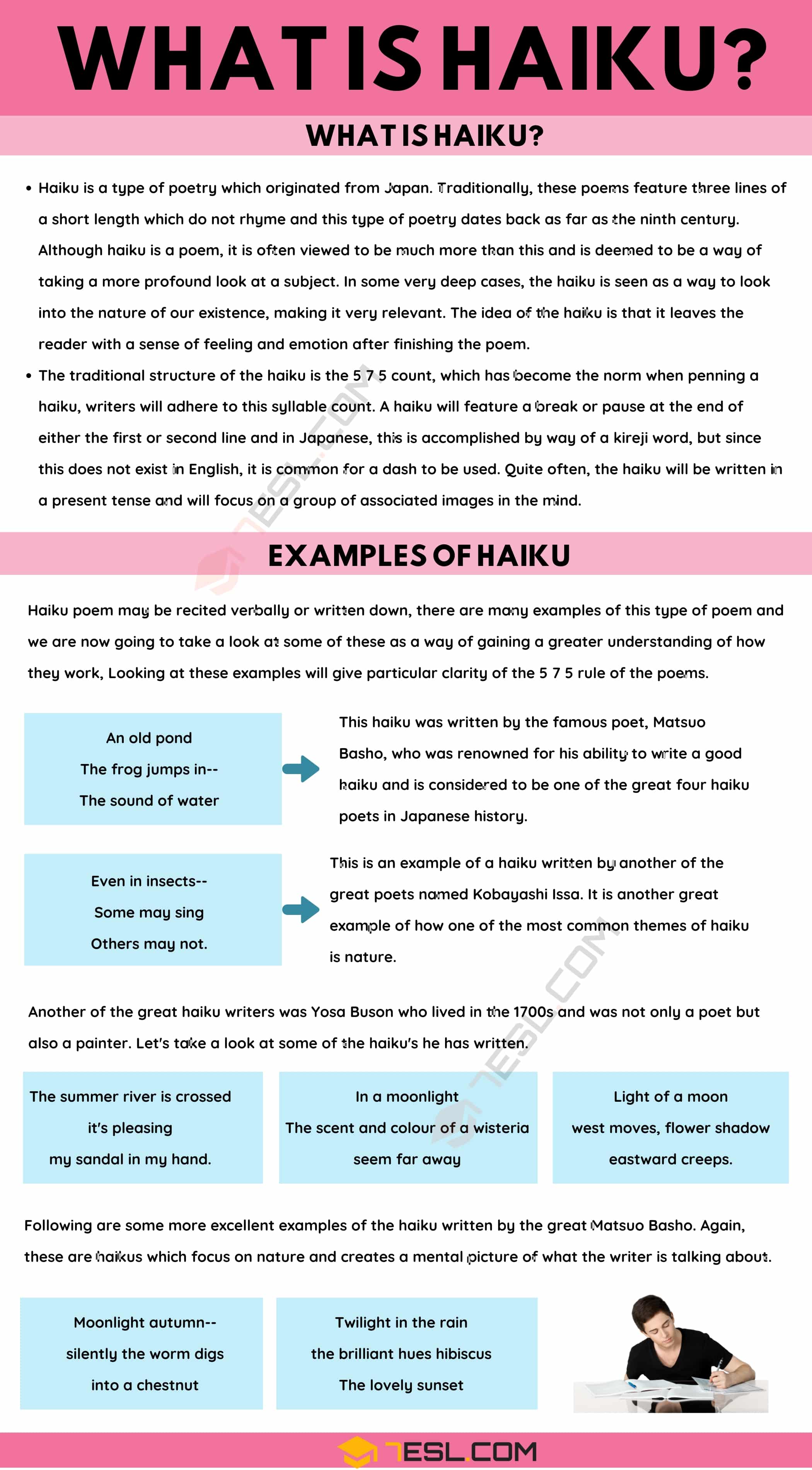 This isn’t how my poem goes….

First you stress the 5-7-5 rule and then you give a bunch of examples that break the rule. I can understand if they are translated in other languages, but ????