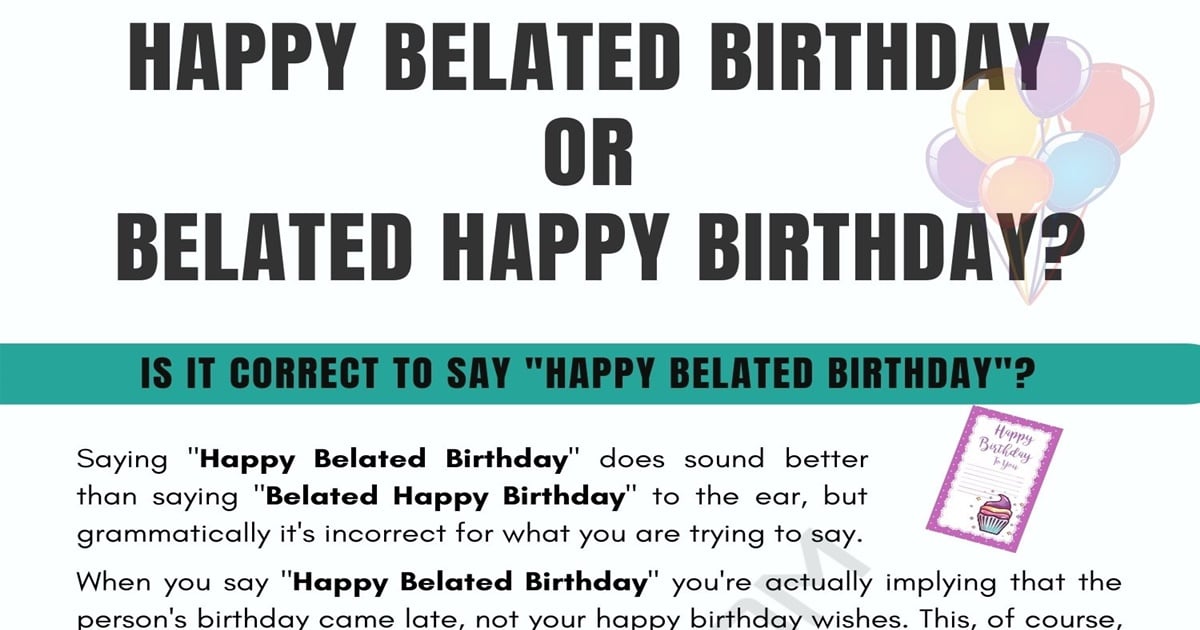 Happy belated birthday or belated happy birthday? If you’ve ever had to send one of these cards (come on admit it, you must have done, right?), then you know that so often these terms are used interchangeably. But did you know that actually only one of these is correct? Grammatically speaking, there’s a huge difference between happy belated birthday and belated happy birthday, so this article will take you through it all, and show you how to use belated in the correct way besides just wishing somebody a late happy birthday.

Is It Correct to Say “Happy Belated Birthday”?

Actually, no, it isn’t. Strangely enough, this is the one that is most often on cards you pick up from the store too. Saying “Happy Belated Birthday” does sound better than saying “Belated Happy Birthday” to the ear, but grammatically it’s incorrect for what you are trying to say. When you say “Happy Belated Birthday” you’re actually implying that the person’s birthday came late, not your happy birthday wishes. This, of course, makes no sense because somebody’s birthday is on a fixed date each year, and it isn’t going to come late; it’ll be the same time year on year (much to the disappointment of the older generation).

It’s therefore correct to say “Belated Happy Birthday” because it is the birthday wishes that you are sending that is coming late, not the birthday itself. Grammatically speaking, this is the correct way, but birthday cards don’t always have grammar at the top of their priorities, so you will come across both types.

How to Wish Someone A “Belated Happy Birthday”

Now, like we mentioned above, saying “Belated Happy Birthday” aloud doesn’t sit well on the ear. Ask anybody how you wish someone a happy birthday late, and almost all of them will say “Happy Belated Birthday” because it rolls off the tongue much easier.

The most common way that you’ll wish someone a belated happy birthday anyway will usually be through a card. We can’t imagine any circumstances in which you would approach somebody and say it to them. So, if grammar is important for you, then look for a card that says “Belated Happy Birthday” on it and they’ll know exactly what you mean. Alternatively, try rewording slightly so it sounds better when you say it aloud. Something like “Belated Birthday Wishes” might be slightly easier on the ear.

It’s important to remember that belated means that something is coming or happening later than it should, so when using it in a sentence it should be used as an adjective to describe a noun. It would not, however, make sense to describe someone as being belated, because that sounds odd to the ear too.

When writing anything, especially the word belated, it may be a useful tip to read the sentence out loud to see how it sounds to make sure that ‘belated’ refers to the thing that is coming or happening later than it should have.

How to Use the Word “Belated”

So after looking at the correct and incorrect way to wish someone a belated happy birthday, you can see that the problem really lies in people’s misunderstanding of the word belated and how to use it correctly. This section will take you through the definition of belated, and provide you with some examples of how to use it correctly, and how it is used incorrectly to highlight why it shouldn’t be used in that way.

Belated simply means that something is coming or happening later than it should have done. So in the case of wishing somebody a belated happy birthday, you are wishing them a happy birthday after their birthday is already over.

If belated simply means that something is coming or happening later than intended, then there are a variety of different ways that it can be used correctly. Here are some examples and explanations as to why it is being used in the correct context:

“I made a belated apology to my wife.”

“Their change in policy to cut carbon commissions is welcomed, but belated.”

Again, this shows that the change in policy is coming later than it should have done. It recognizes that something has finally taken place, but it is overdue. It highlights the lateness of the policy change, so it’s used in the correct context.

“We apologize for the belated start to the show.”

Again, the show has started later than it should have done, so you can refer to it as being belated and that is perfectly correct.

Confusion tends to rise when people try to use belated in a literal sense in a way that doesn’t actually apply. For example, describing somebody who has shown up late to class as ‘belated’ is incorrect. Let’s take a closer look:

“The student was belated to class.”

Taking this literally, it means that the student was coming later than they should have done to class. Whilst yes, that technically makes sense, belated isn’t typically used in that way. Instead, belated could be used in a much more grammatically friendly way, by changing the sentence to something like this:

“The student’s arrival to class was belated.”

This means that their arrival came later than it should have done, and that makes much more sense grammatically, and it’s in a style that most people would be used to seeing, so immediately the message behind the sentence is clearer. Whenever we write or say anything, clarity is key, so this is an excellent example of changing your sentence to fit the general conventions of grammar for reader friendliness. 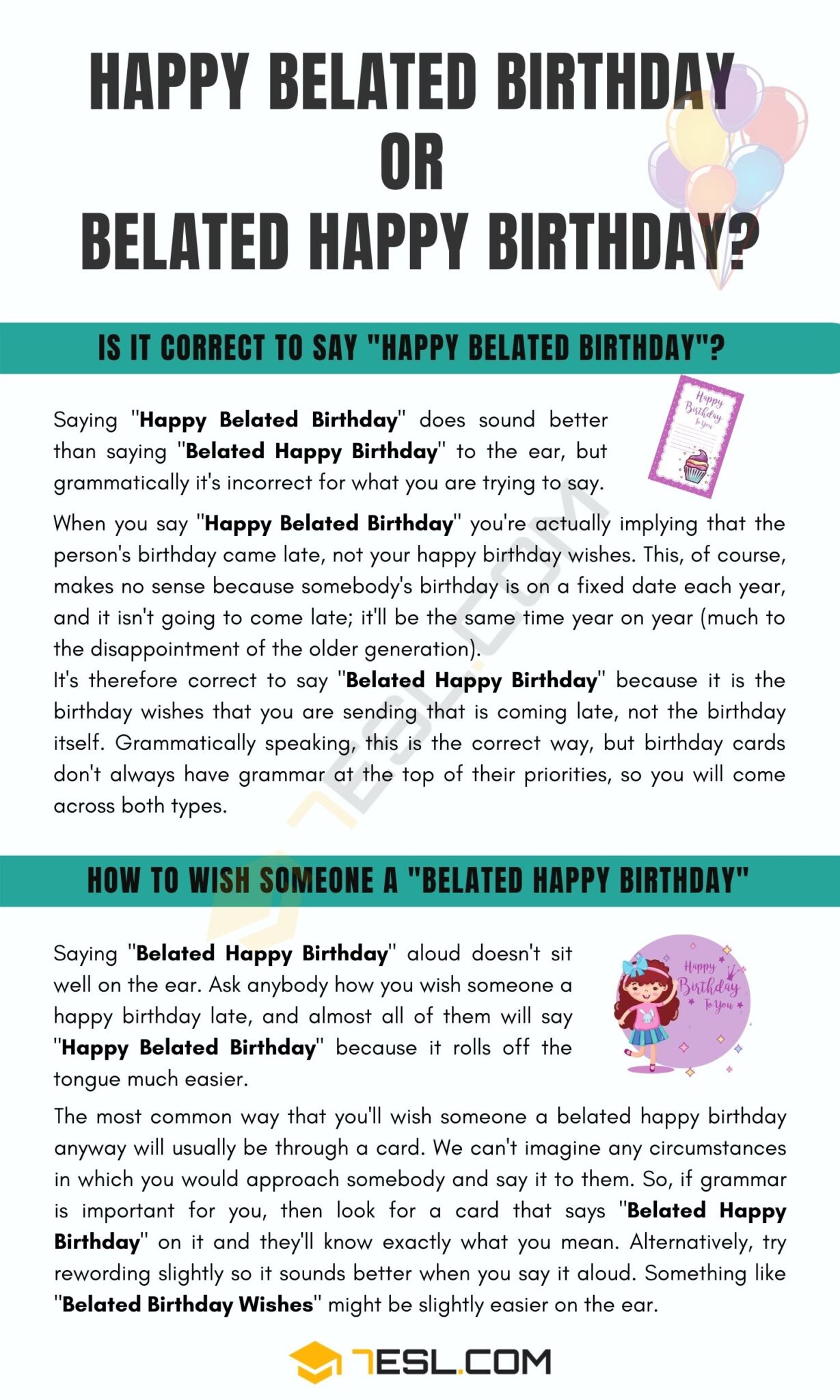