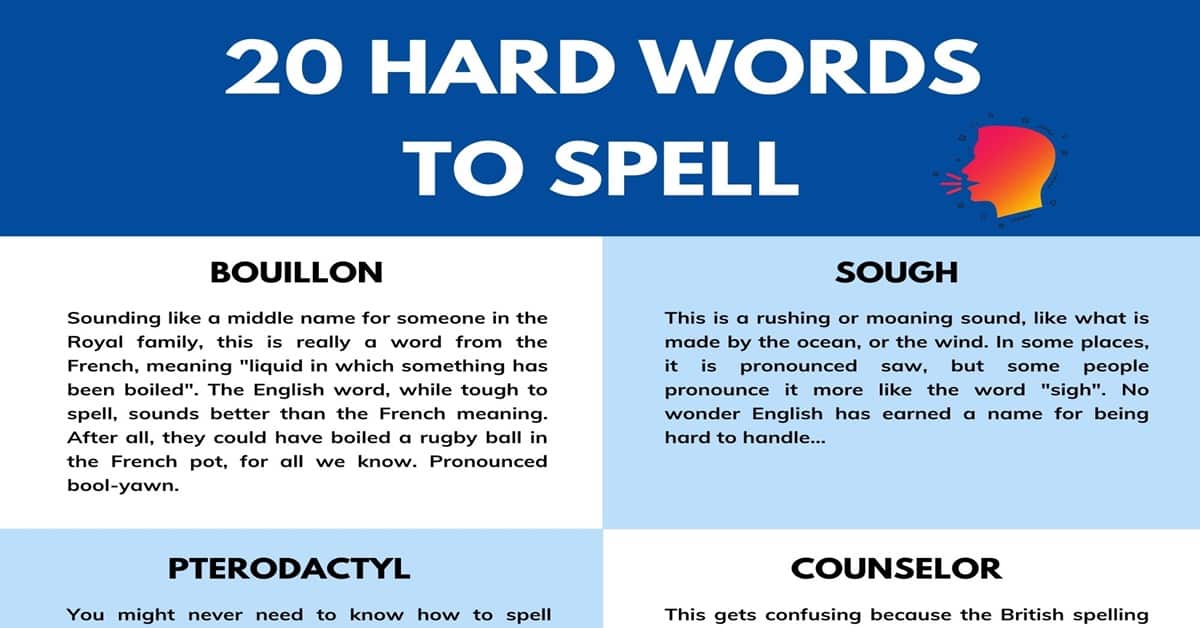 Learn the hard words to spell in English. The English language is notorious for being difficult to learn. With daily usage causing constant change, and the influx of people from diverse backgrounds always adding new expressions, it is a wonder anyone can keep up with it. Still, the complexities are part of what make English so interesting. When something is interesting, people participate in it. It gets utilized. And that’s the whole point of language, is that it gets used. That is the way it stays alive and vibrant.

But along with life and growth, there will be words and phrases that are hard to work with, and words that may not be very easy to spell.

The 20 Hardest Words to Spell

Sounding like a middle name for someone in the Royal family, this is really a word from the French, meaning “liquid in which something has been boiled”. The English word, while tough to spell, sounds better than the French meaning. After all, they could have boiled a rugby ball in the French pot, for all we know. Pronounced bool-yawn.

A slip of paper comes in handy. This word makes use of the old rule: “I before E except after C, and in about 100 other instances”.

Takes the silent letter rule to another level, with this word that feels like someone shut the refrigerator too hard, and all the magnet letters fell on the floor.

This gets confusing because the British spelling is counsellor. When will they learn that it’s easier on the American plan?

A short word that makes you breathe hard just trying to spell it.

A word that is nearly as tricky to pronounce as to spell. Exacerbate is pronounced ex-ass-er-bate. It means to make an already bad situation even worse.

Pronounced nǝ-mah-nic. This is a group of numbers or letters used to represent something else, often to aid in remembering. An example is Be-Easy-Alice-Don’t-Grab-Carol’s-Finger, used in music to represent the order of flats on the staff.

This is a skin condition.

Although this is a pretty common word, it gets misspelled regularly because of the double “nn’s” and “air”. It’s just one of those words that loves to trip us up with simple ploys.

An extremely common word, it is misspelled frequently. People wonder how many “m’s” should there be? How many “r’s? Is it an “a” after the “t” or an “o”? Now we can get it right, and truly be ready for tomorrow.

The noun takes a “c”, the verb form requires an “s”. But how do we possibly remember that? Advice always has a word in front of it. We give advice, we take advice. Advise stands alone. We advise someone.

What we all wish to be, but with some of these words, let’s face it—we’re not. We rely pretty heavily on spell-check. Unfortunately, the gadgets don’t catch everything, so it’s a good idea to stay up on our words.

This is a rushing or moaning sound, like what is made by the ocean, or the wind. In some places, it is pronounced saw, but some people pronounce it more like the word “sigh”. No wonder English has earned a name for being hard to handle…

This is a lung inflammation, which is definitely no fun. But now you will know how to spell it if it happens.

So delicate that it is nearly undetectable. Usually used when talking about contrast or alteration.

No, this isn’t referring to the good-looking neighbor who just moved in. Unless, of course, they think they’re better than everyone else on the block.

Typically thought to be a French cap, evidence has been found that berets were worn in the Bronze Age. It is still one of the hard words to spell, though, raspberry or not.

Whether you are finding it on your teeth or receiving it as an award, this word can be frustrating—until you get the “hang” of it.

Hardest Words to Spell in the English Language | Video

20 Hard Words to Spell in English

Very useful for most of the words have been long forgotten.

I do not know what it means?!

this really helped thank you so much

Am in
For the discussion

It’s so so helpful for me, because I learn so much words like haughty, subtle, and pterodactyl anyways I hope next time. You add the word facade.😊