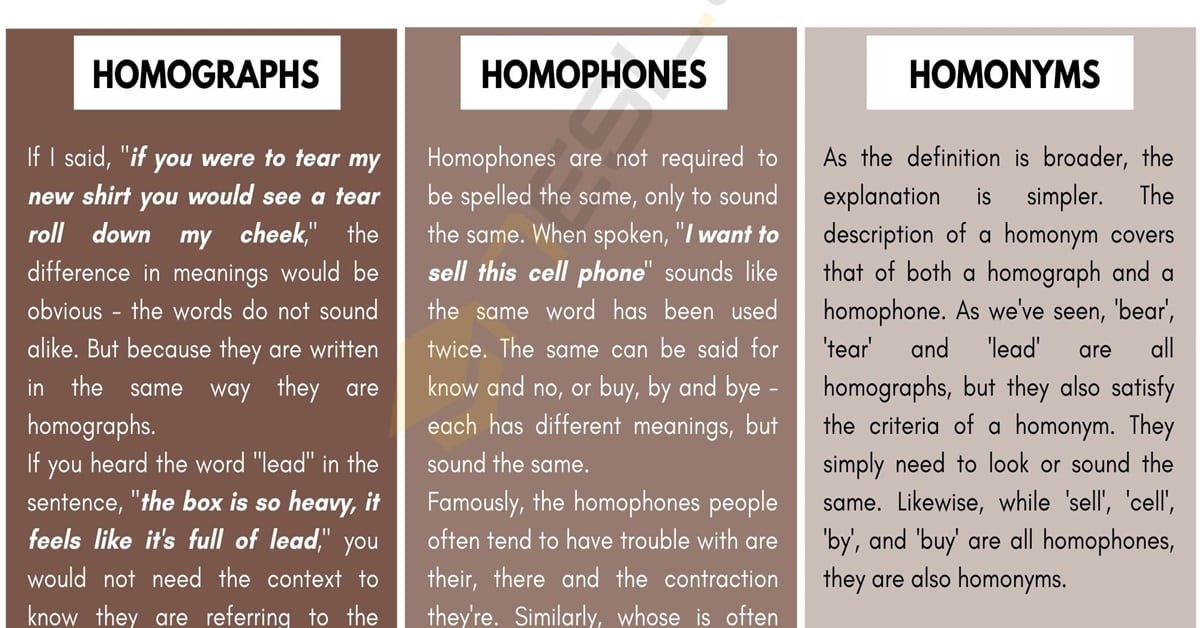 When studying the English language, at some point you are bound to come across the following terms: homographs, homophones, and homonyms. You may be aware that they relate to how words are spelled and pronounced, but what exactly do they mean? And what are the differences between the three?

It can help to break these words down a little. The prefix homo– comes from the Greek word meaning ‘same’. The ending –graph can be taken to mean write, while the ending –phone can be taken to mean hear. Think ‘photograph’ as a visual representation of something and ‘telephone’ for the need to listen. So, words that are homographs look the same when they are written down, while words that are homophones sound the same when spoken.

The suffix –onym is a little less specific, but then so is the meaning of the word homonym. Broken down, it basically means ‘the same word’, and so is used to refer to words that are the same in some way. Specifically, words that either sound the same or look the same. This is important because while homograph refers specifically to words with an identical appearance, and homophone refers only to words that sound the same, homonym can mean either.

Let’s take a look at some examples.

We’ve all come across words that look the same on the page and require more information before being certain what is meant. Typically, the best way to be sure is to understand the context in which it is used. Once the full sentence has been read, and possibly the sentence before or after too, the meaning usually becomes clear.

For example, if a sign says “Beware of the bear” it should be clear that you need to look out for something dangerous. The animal, a bear, certainly fits that description. Imagine, on the other hand, you are reading a novel. In it, a character declares, “I could not bear to spend another day without you!” In this example, the inclusion of a giant hairy mammal obviously makes no sense! Here, the word ‘bear’ is being used to mean endure. While the words may be spelled the same, the difference in meaning is apparent when you consider the context.

Both versions of the word bear sound identical. However, as has been mentioned, this is not necessary to qualify as a homograph. So, words such as ‘tear’ and ‘lead’, despite having multiple pronunciations, also qualify.

If I said, “if you were to tear my new shirt you would see a tear roll down my cheek,” the difference in meanings would be obvious – the words do not sound alike. But because they are written in the same way they are homographs.

If you heard the word “lead” in the sentence, “the box is so heavy, it feels like it’s full of lead,” you would not need the context to know they are referring to the metal. Similarly, if they said, “you take the lead and I’ll follow,” you know they are no longer talking about heavy elements. But on paper, the word alone does not offer the same certainty. So, they are homographs.

Homophones are not required to be spelled the same, only to sound the same. When spoken, “I want to sell this cell phone” sounds like the same word has been used twice. The same can be said for know and no, or buy, by and bye – each has different meanings, but sound the same.

Famously, the homophones people often tend to have trouble with are their, there and the contraction they’re. Similarly, whose is often confused with the contraction who’s, and your is confused with you’re. Someone’s spoken usage can be perfect, despite struggling to remember which is the correct homophone to write.

As the definition is broader, the explanation is simpler. The description of a homonym covers that of both a homograph and a homophone. As we’ve seen, ‘bear’, ‘tear’ and ‘lead’ are all homographs, but they also satisfy the criteria of a homonym. They simply need to look or sound the same. Likewise, while ‘sell’, ‘cell’, ‘by’, and ‘buy’ are all homophones, they are also homonyms.

Remember, if you are having trouble remembering the difference between homographs, homophones, and homonyms, the safest bet is to opt for homonyms. That way, you cover all bases. 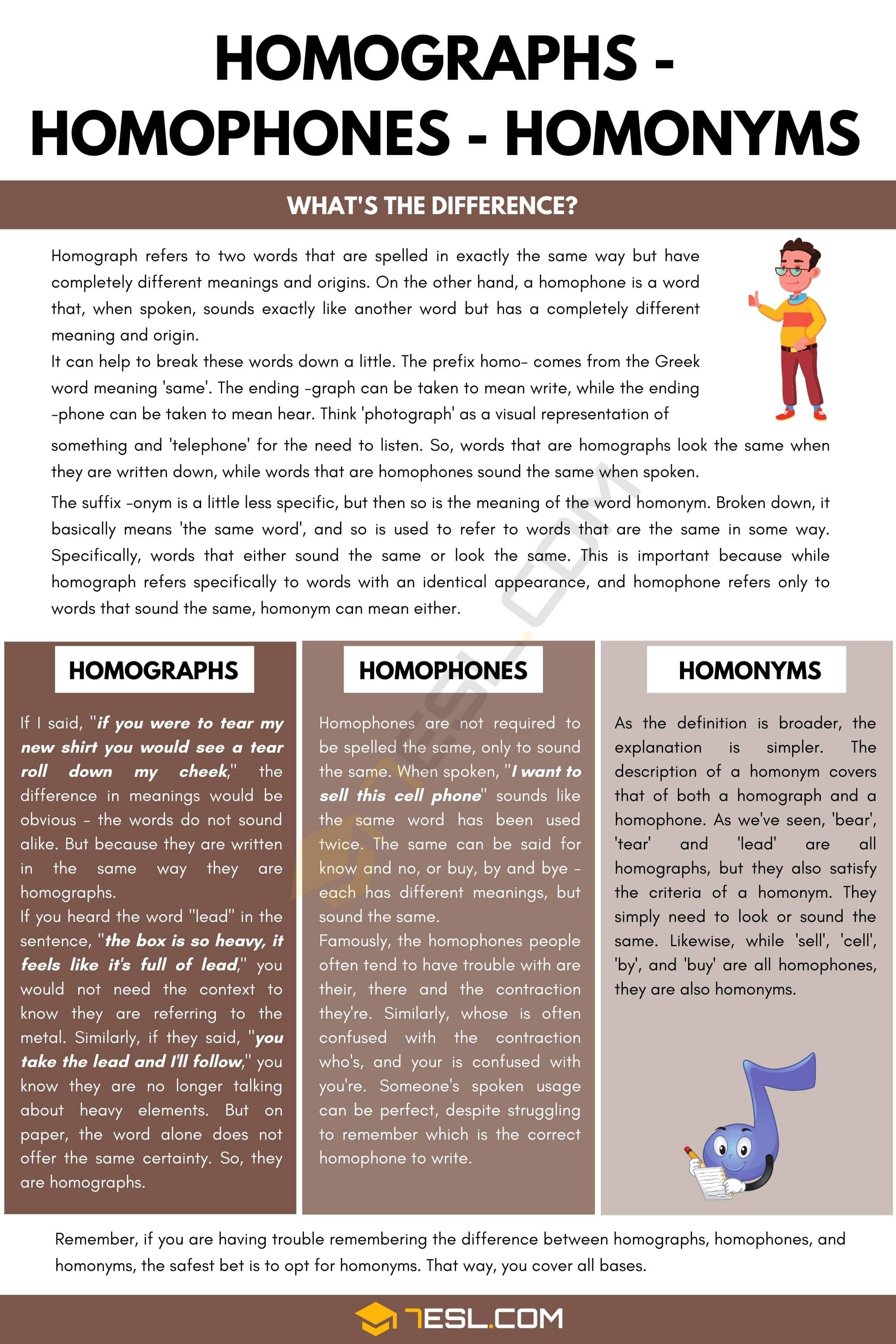