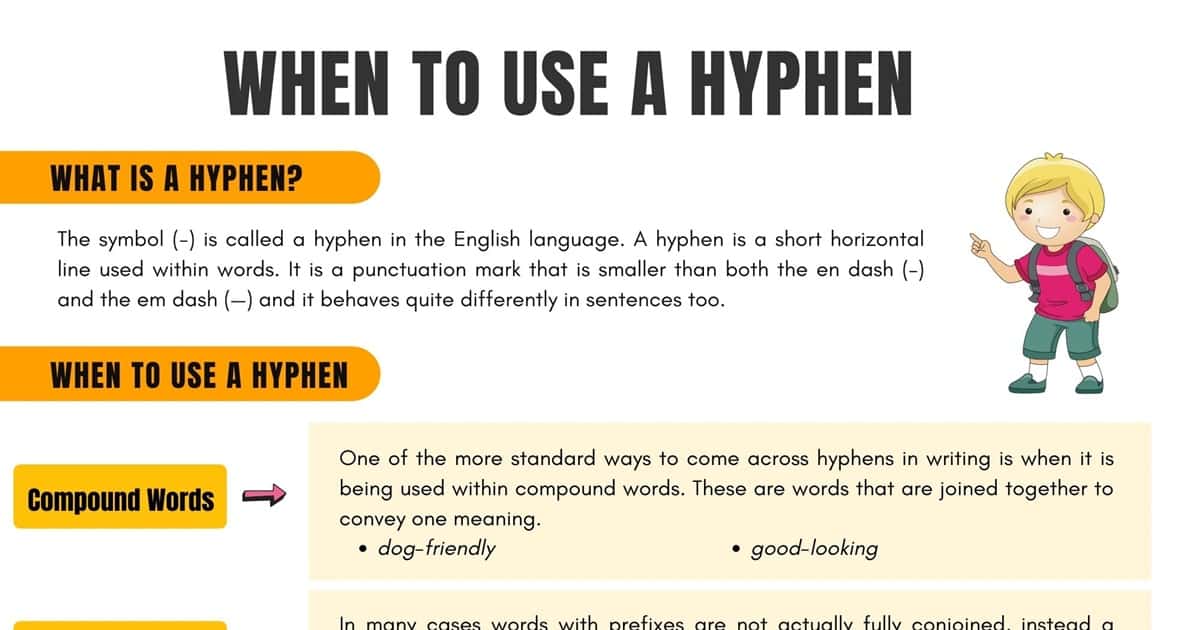 What is a hyphen? A hyphen is yet another piece of punctuation that can be difficult to use. So often it is confused with em dashes and en dashes because of how similar they all look. Thankfully, the hyphens function within a sentence is slightly different to the others, So, by learning about how to use a hyphen correctly, you should be able to learn how to avoid confusing them with em and en dashes.

What is a Hyphen?

The symbol (-) is called a hyphen in the English language. A hyphen is a short horizontal line used within words. It is a punctuation mark that is smaller than both the en dash (–) and the em dash (—) and it behaves quite differently in sentences too.

Key Points to Remember When Using a Hyphen

It would be difficult to remember every rule associated with a hyphen because there are so many different ways to use them. The key though, is knowing that hyphens are very different to em dashes and en dashes and they are not interchangeable as some people mistakenly believe. If you look over this guide a few times though, you should get to grips with hyphens and their various uses. Just remember the rule from the section on when not to use a hyphen though, so you don’t make the common mistakes that others do.

A hyphen is indeed a type of dash. But it works very differently from the others, and will only ever be found within words to show that they have been compounded or joined together to form one meaning. Some people may refer to other dashes as a long hyphen, but again this isn’t strictly speaking correct. Saying terms like long hyphen simply confuses things already. It’s best to stick with hyphen (-) en dash (–) and em dash (—).

When to Use a Hyphen

How and When to Use a Hyphen

There are many different ways that a hyphen can be used. Unlike the em dash or the en dash, hyphens are far more common in writing and it has a variety of different functions. We’ll try to cover them all throughout this guide, but you may come across hyphens being used in different ways elsewhere too. This is because hyphens are so often used in nonstandard and informal writing in many different creative ways. We couldn’t possibly list them all here though, but below is a general overview.

One of the more standard ways to come across hyphens in writing is when it is being used within compound words. These are words that are joined together to convey one meaning. This is very common but here are some examples:

In many cases words with prefixes are not actually fully conjoined, instead a prefix is attached to the word using a hyphen. Here are just some examples:

Because we used the adjective and the participle before the noun we were describing (in this case the garden) we were OK to use a hyphen. In the example below, we used the noun (the garden) first, so we couldn’t use the hyphen for beautiful looking.

Compound modifiers are simply two words that are joined to act as one adjective to describe something else. Here are some examples in sentences:

Whenever we write a number instead of putting its digits down instead, we need to use a hyphen whenever it is more than just one number. For example:

Again, if we aren’t expressing fractions as digits, then we need to remember to include a hyphen. Here are some examples in sentences:

Sometimes we need to show the number of syllables in a word. Perhaps if you are a teacher and you’re trying to teach children a new word, breaking the word into syllables might be easier. To represent the syllables we usually use hyphens. Like this:

This is a technique that is most often seen in fiction writing, but it can be seen elsewhere too. If you’re character speaks with a stammer, or you’re trying to indicate that they are scared of something and their voice is trembling, you can use a hyphen to represent the stammer in their speech. Like this:

Hyphens with High or Low

When using high or low as a compound word to describe something you should always hyphenate the words. Below are some common examples in sentences:

When not to Use a Hyphen

As we’ve already discussed, if a participle (a verb acting as a noun or adjective) is part of the compound word to describe a noun it should only be hyphenated if it comes before the noun. Here is one more example to make that clearer:

When the noun (in this case the officer) that you are describing comes before the participle compound adjective, then you do not hyphenate. When the noun comes after, you do hyphenate.

How to Type a Hyphen

Typing hyphens are much easier than en dashes and em dashes because there is actually a key for it on all keyboards. Simply hit the ‘-‘ key and a hyphen will appear.

Common Hyphen Mistakes and How to Avoid

There’s really only one rule when it comes to hyphens, but breaking this rule is surprisingly common. Besides that, any mistakes are largely due to confusing hyphens with em dashes and en dashes. First, we’ll highlight the differences between hyphens and em dashes and en dashes, and then we’ll take a closer look at the most common mistakes people make when using hyphens. 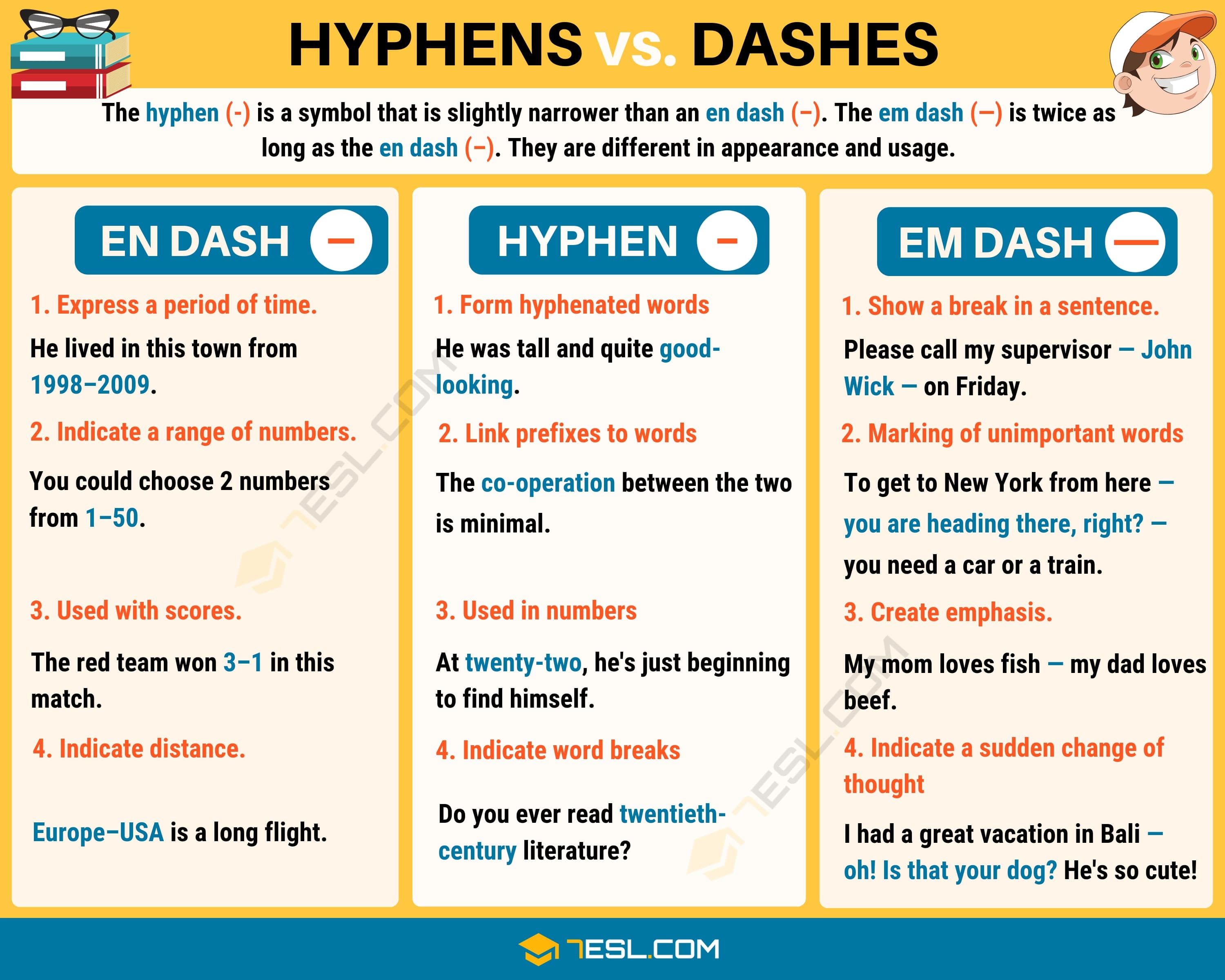 An en dash (–) is very different from a hyphen (-). En dashes are used to show a span or a range, a score, or a conflict/connection between two words. A hyphen would likely be confused with an en dash when joining words. Remember though that the connection/conflict that en dashes are used for are for nouns generally. So things like ‘Liberal–Conservative debate’ ‘London–Paris flight’, whereas hyphenated words generally act as adjectives such as ‘dog-friendly restaurant’ ‘high-impact crash’ etc, Remembering this key difference should help you to avoid making the mistake of mixing the two of them up.

An em dash (—) is again, very different from a hyphen (-). Em dashes are used to replace punctuation (such as commas, parentheses, colons, and semicolons) or are used to show an interruption or represent missing words or parts of a word. Hyphens have many uses, but it does not replace punctuation like em dashes do. The key way to remember the difference between these two is not only the size difference, but also that em dashes do not appear within a word, but hyphens always do.

This is the one rule to remember above all others to avoid making grammar mistakes. A hyphen should only be used when a participle is used in a compound adjective when you use the words before the noun you are describing. Because we’ve covered this a couple of times now, we’d like to put you to the test. Decide whether the following sentences are correct or not, and keep the key rule in your mind as you look:

2) The cars were incredibly fast-paced.

3) The beautiful-sounding birdsong broke out early in the morning.

1) Correct! We used the participle adjective before the noun!

2) Incorrect! The noun we are describing (the cars) comes before, so it should be ‘fast paced’ not ‘fast-paced’. Like this:

The cars were incredibly fast paced.

3) Correct! We used the noun after the compound adjective, so we should hyphenate in this situation.

Examples of Using Hyphens in Sentences

Again, we’ve already looked closely at many different ways to use it, so this section will just include examples of all the ones you will most commonly come across in sentences so you can see the hyphen in action a little more!

To Indicate A Stammer

With High Or Low

Hopefully, the previous guide on hyphens and this one has made you feel more confident with using hyphens in your own writing. As always, we thought it’d be a good idea for you to put your knowledge to the test to see if you can spot the correct and incorrect usage of hyphens so you can be confident in using them yourself. In the following examples, decide if they are correct or incorrect. If you think they are incorrect, how should the sentence look?

1) The crash had been low-impact.

2) The singer was well-known and coming to the party tonight.

3) My self-esteem is high, but even I couldn’t approach the beautiful-looking girl.

1) Correct! Remember, we should always use a hyphen when we use the words high or low to help describe something.

Because we reveal the noun (the singer) that we are describing before the participle compound adjective, we should not hyphenate. So, to be correct it would have to be written as one of the two following examples:

We used a hyphen to connect the prefix ‘self’ to the word ‘esteem’ which is correct. We then also used the participle compound adjective in the right way because we used it before the noun we were describing (in this case, the girl).

We can use a hyphen to represent stammering, but in this case we replaced it with an em dash. Remember to always be vigilant for the size differences between the hyphen (-) en dash (–) and the em dash (—). It should have looked like this:

5) Incorrect! With any numbers or fractions we must always hyphenate. So it should have looked like this:

When to Use a Hyphen | Picture 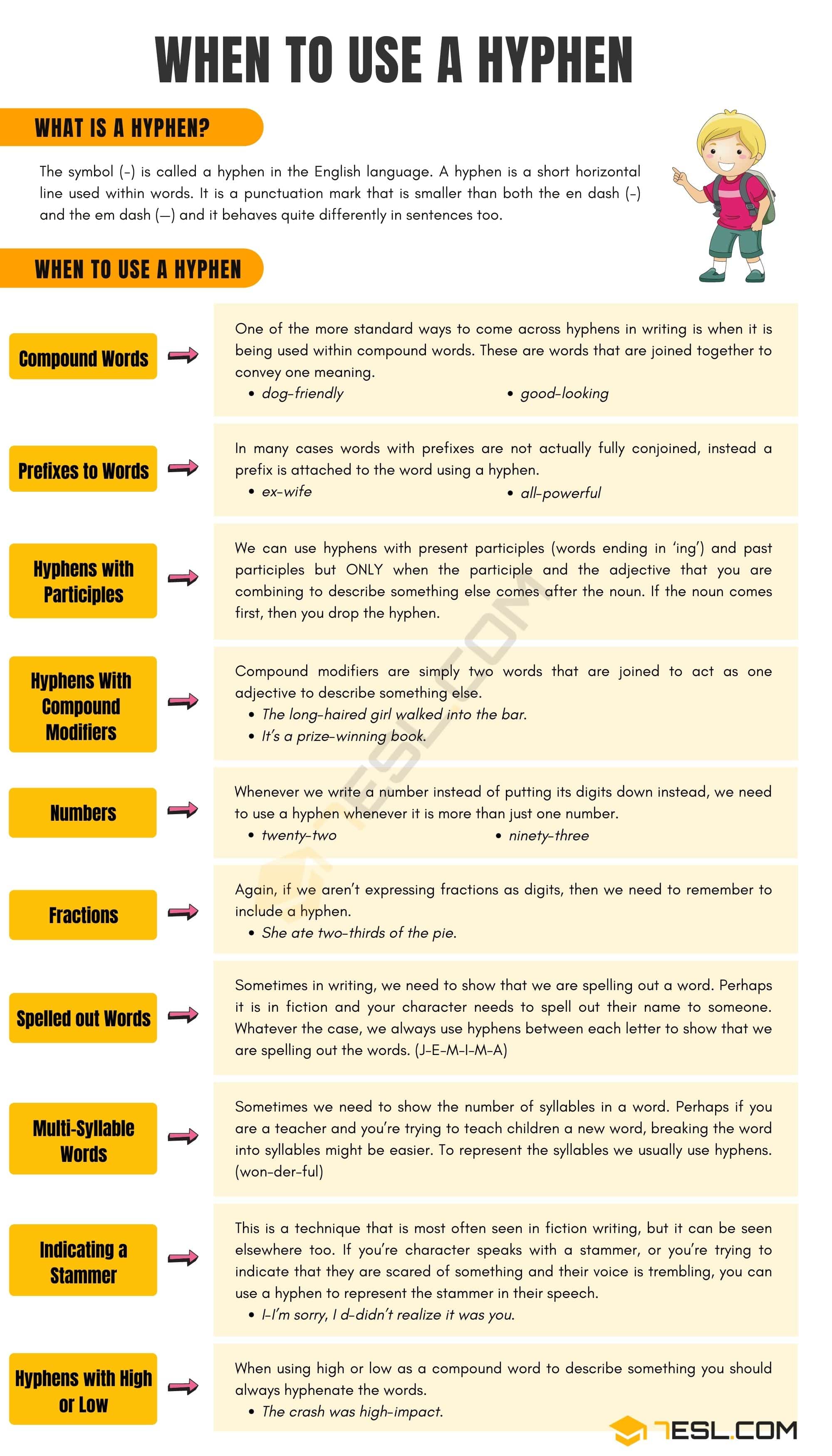 can you give full description about hyphens

is “time- and energy-consuming “ a correct word?

What is the correct way of writing it?

This is correct. I searched it up. You can see the word ‘time-consuming’ in both Merriam Webster’s and Cambridge dictionary. I’m not sure with energy-consuming although there are results, the websites aren’t trusted ones.

its something else ok