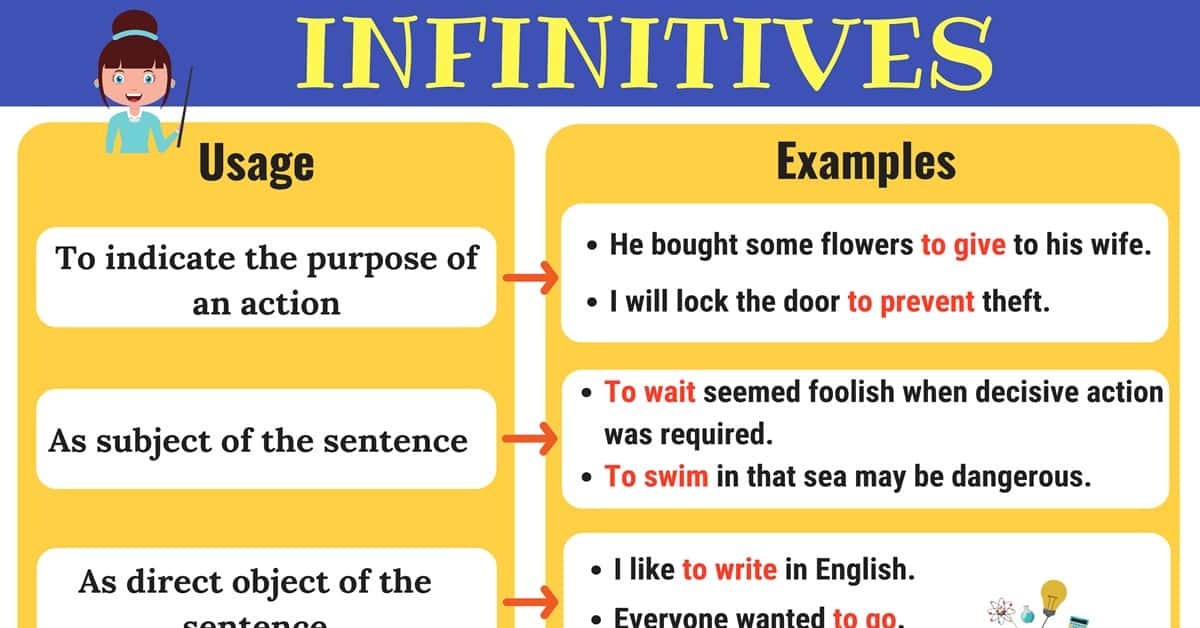 Infinitives! What is an infinitive? Learn infinitive definition and when to use infinitives in English with useful grammar rules, video, example sentences, and ESL worksheet.

What Is An Infinitive?

What is an infinitive? An infinitive is a verbal consisting of to + a verb, and it acts like a subject, direct object, subject complement, adjective, or adverb in a sentence. Infinitives are easy to identify because they’re written with to + a verb.

Although an infinitive is easy to locate because of the to + verb form, deciding what function it has in a sentence can sometimes be confusing.

Keep in mind that though infinitives are verbs, they function differently from verbs, and instead, they act as a noun, adjective, or adverb.

Here the verb is “desire” and “to study” is the infinitive.

“To study” is the direct object of “desire” since it’s the receiver of the action of the verb.

Here the infinitive functions as a noun.

It tells more information about the noun “conversation.”

Here conversation can only be extended if there is something common to share.

Here the infinitive “to share” functions as an adjective.

“To join” is the infinitive phrase.

The infinitive phrase describes more information as to why John left school early.

In other words, it modifies “left,” which is the verb.

In this sentence, the infinitive acts as an adverb.

Keep in mind that a noun can be a person, place, or thing. When used as a subject or direct object in a sentence, an infinitive phrase acts as a noun. In such a case, the subject assumes the role of a verb, whereas the direct object is the receiver of the action of a verb.

“To watch” is the infinitive as it receives the action of the verb (to be liked).

“To watch” acts as a direct object of the sentence.

Here, the infinitive acts as a noun that expresses a thought.

In this sentence, “is” is the verb and “to join” is the infinitive as it answers the question about what is so necessary?

Here the infinitive phrase “to join” is the subject of the sentence.

This is an indication that the infinitive acts as a noun in this example.

An adjective is a word that describes more information about a noun. An infinitive act as an adjective if it modifies or describes a noun in a sentence.

Here “needs” is the verb, and “table” is the subject (noun).

“To read” is the infinitive, and it acts as an adjective.

Here is an example:

Here “to hear” is the infinitive. It gives additional information about the adjective “surprised.”

When to Use Infinitives?

We use the infinitive:

To Indicate the Purpose of an Action

As the Subject of the Sentence

As the Direct Object of the Sentence

Used with the Question Word

How to Use Infinitives with Examples | Picture 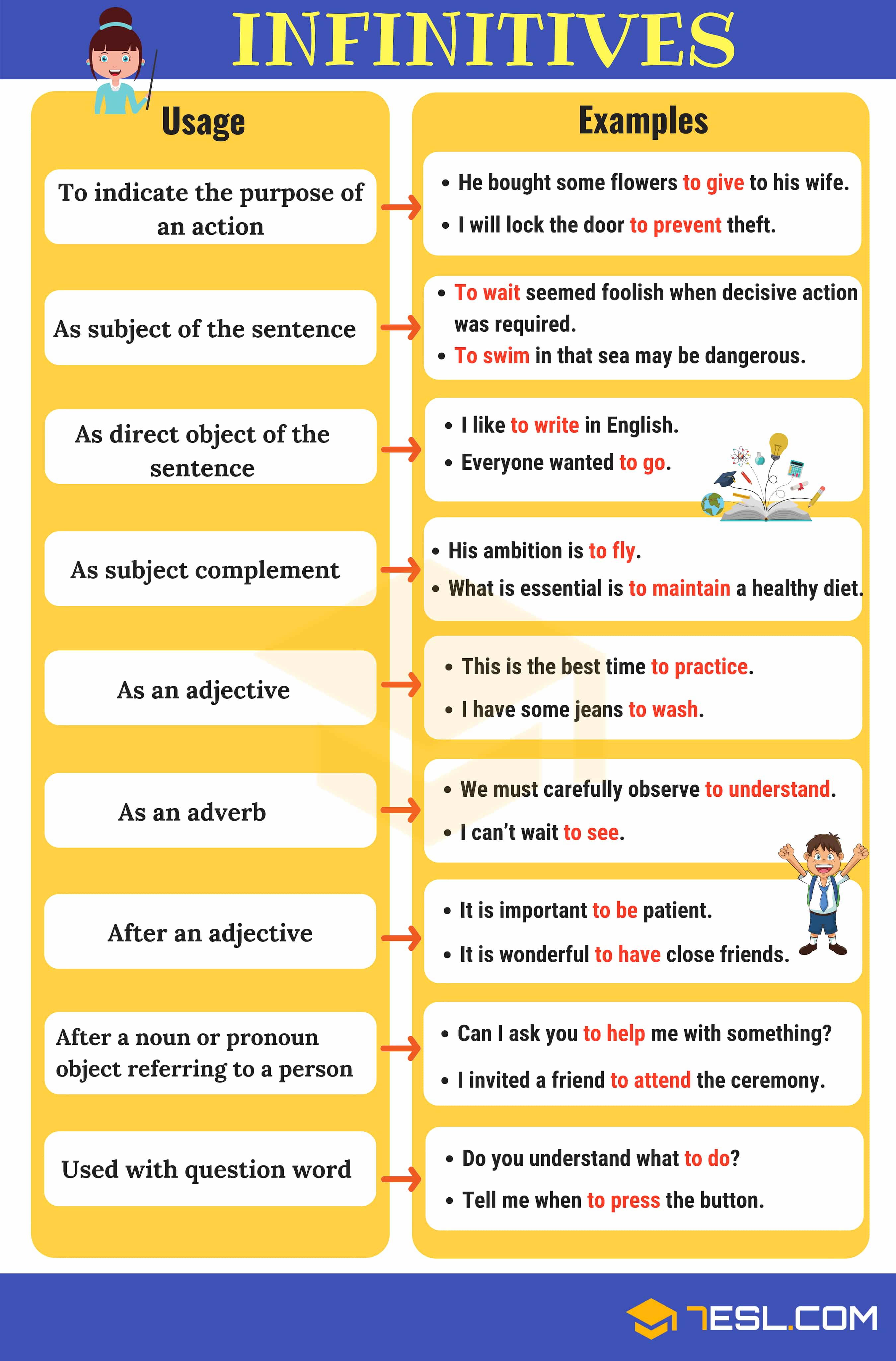 Learn a useful list of Verbs Followed by Infinitives in English with examples.

Hold on for a minute, I’ve just got to put on my makeup.

I hesitate to spend so much money on clothes.

I hope to see you again soon.

We’ll have to hurry to catch the last train.

I heard they intend to marry.

Children learn to creep ere they can go.

Ancient people like to have a declaration before war.

Men love to hear well of themselves.

I didn’t mean to hurt your feelings.

Don’t neglect to lock the door when you leave.

You need to change your eating habits. 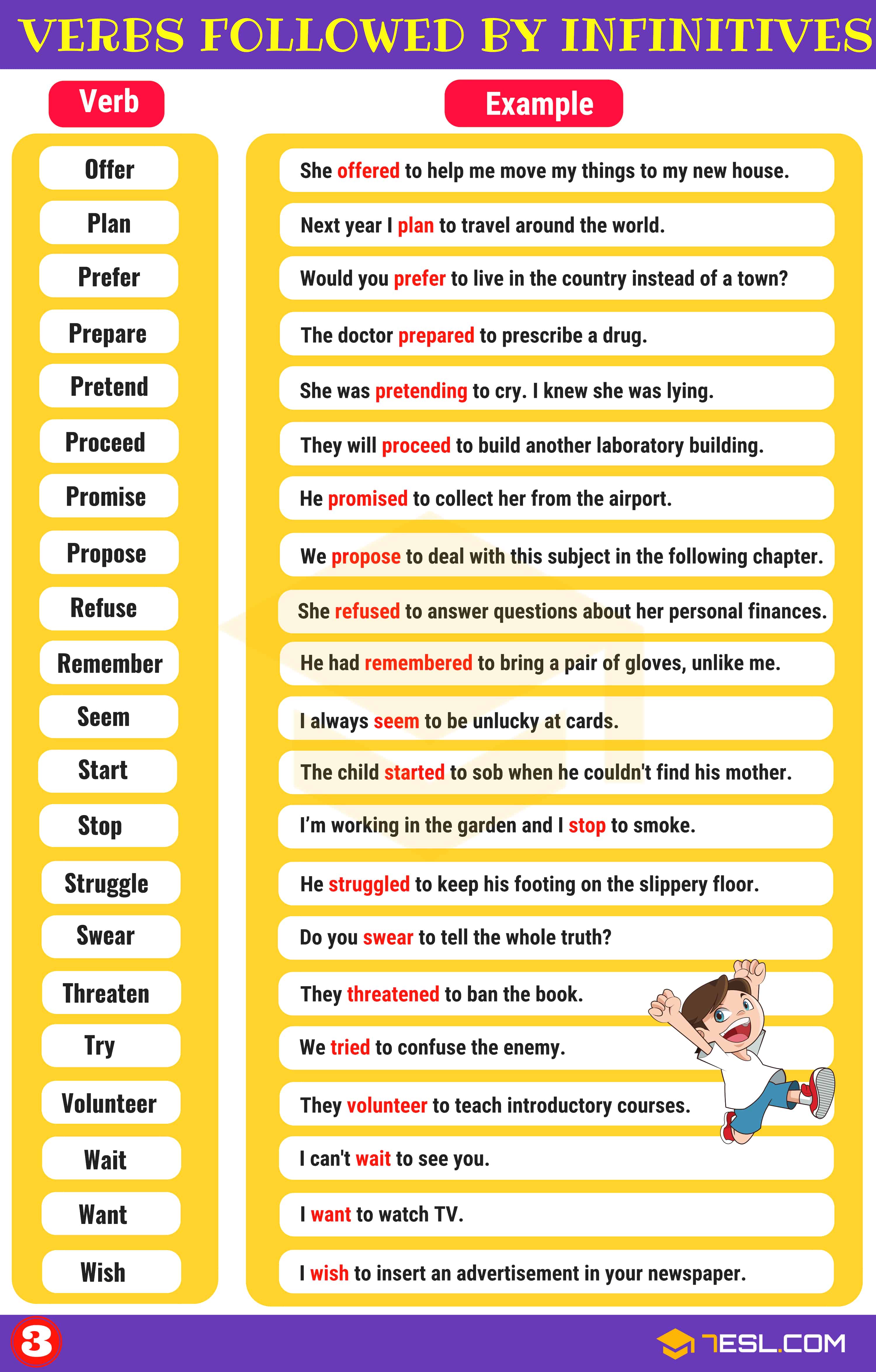 She offered to help me move my things to my new house.

Next year I plan to travel around the world.

Would you prefer to live in the country instead of a town?

The doctor prepared to prescribe a receipt.

She was pretending to cry. I knew she was lying.

They will proceed to build another laboratory building.

He promised to collect her from the airport.

We propose to deal with this subject in the following chapter.

She refused to answer questions about her personal finances.

He had remembered to bring a pair of gloves, unlike me.

I always seem to be unlucky at cards.

The child started to sob when he couldn’t find his mother.

I’m working in the garden and I stop to smoke.

He struggled to keep his footing on the slippery floor.

Do you swear to tell the whole truth?

They threatened to ban the book.

We tried to confuse the enemy.

They volunteer to teach introductory courses.

I can’t wait to see you.

I want to watch TV.

The zero (bare) infinitive is a type of complement with an infinitive verb form that’s not preceded by the particle to. Also known as the bare infinitive. 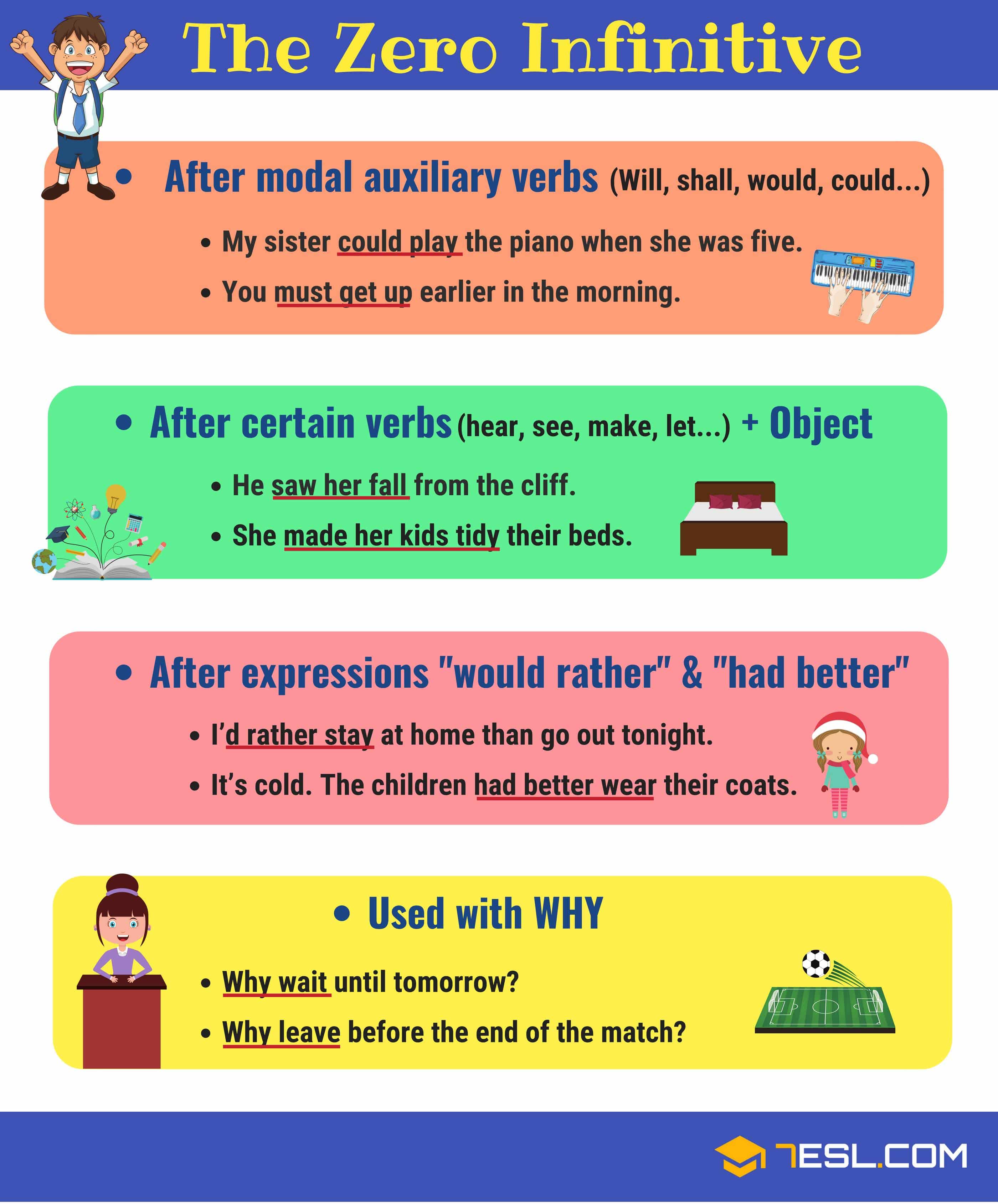 Perhaps that phrase functions as adjective, for it provides information about the noun ‘The efforts’

It tells more information about the noun “conversation.”

Doesn’t this infinitive tell more not about “conversation” but about “something in common”?

Here “needs” is the verb, and “table” is the subject (noun).

“Table” isn’t a subject, it is a direct object of “needs”, and “to read on” acts as a modifier of this “table”

That’s correct. Joyce is the subject of the sentence – the table is the object.

can is ask you to help me with something? here what is the function of ‘to help’ noun, adjective or adverb?